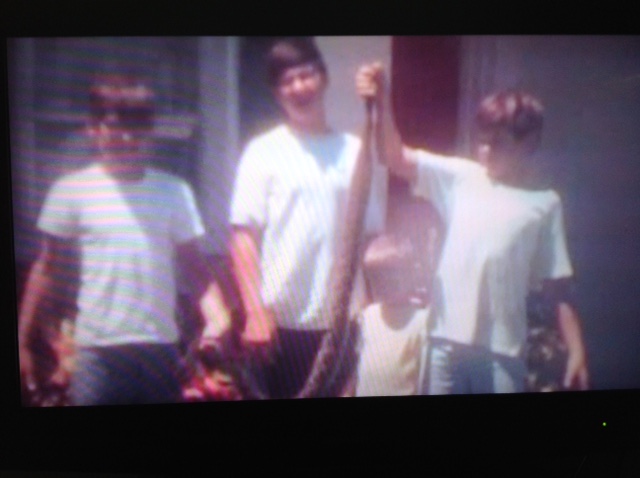 Today marks “World Snake Day.” (Who knew there was one?)

The Comics Kingdom “Ask A Cartoonist” blog is celebrating by posting snake drawings and stories by King Features cartoonists. I contributed an infamous Parker family snake story to the blog. You can check it out along with some great snake cartoons here http://comicskingdom.com/blog/2015/07/15/ask-a-cartoonist-there-s-a-snake-in-my-boot

But if you’d rather, here’s the story…

When we were kids, my brothers and I would often catch snakes to keep as pets. We had rat snakes, pine snakes, garter snakes, and ghoulishly fed them a variety of live small creatures and bugs — which, truth be told, always left me kind of squeamish.

One summer we were enlisted to help with the maintenance and groundskeeping at our Catholic elementary school. My oldest brother, Jimbo, home from college, was mowing the schoolyard grass on a riding mower one day when he spotted a big diamondback rattlesnake. Our mid-1960s grade school had been carved out of a giant patch of saw palmetto in Canova Beach, Florida — y’know, the “Sunning-snake State.” So all sorts of wildlife lived in the surrounding palmettos, no doubt laying in wait for a chance to pounce on a stray third-grader or two over by the portables.

Jimbo chased down the rattler and somehow managed to run over its head with the mower’s front wheel, killing it of course. The thing measured just over five feet long and we counted fourteen segments to the rattle. My brothers and I proudly took the trophy home to skin.

Our Dad, who knew how to skin a snake, was out of town on business for a couple of days so my Mom gave us a box to coil the bloody-headed snake into. Then she made room for it in the refrigerator among the cucumbers, Kool-Aid, eggs, and leftovers until Dad got home.

The story of the rattlesnake in our refrigerator spread through the neighborhood like venom spreads through a snake bite victim’s circulatory system. Every kid from blocks around came to see the monster. We could’ve sold tickets.

When Dad got home, he sharpened a big knife and set to skinning and curing. The snake had been in an ever-opening and closing fridge for a few days, and Dad couldn’t be sure whether or not the rattlesnake meat had turned. So to play it safe, the leftover diamondback was buried near our Tangelo tree in the backyard, leaving us robbed of the chance to sample homemade Rattler a la King.

That dried snake skin hung in our shared bedroom until we all grew up and left home. As the years passed, the shiny skin of the scales began to fall off in droves, and bits of the rattle had crumbled, so Mom eventually pitched it.

Here’s a screen grab from some old, family home movies of our rattler… That’s me holding the tail at right, my brother John holds the head at left, with bros Joe and young Jack looking on. (click to enlarge)