A week or two ago, a Canadian reader had asked us here about a series he had run across called Scott’s Scrap Book. It was a very long-running panel, and its creator was a very prolific cartoonist. 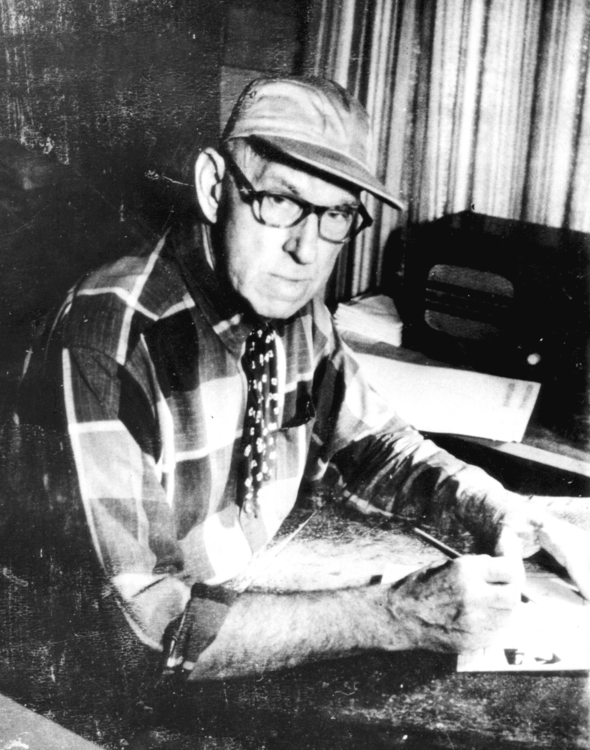 Photos of Mr. Scott are rare.  I own the original of the one above, a very early Polaroid circa 1955, which is about credit card sized. The emulsion had started to mold and smear across the image, leaving it looking like a badly kept daguerreotype when this cleaned-up enlargement was made, possibly at the time of the artist’s demise, for a news photo.

Two Scott editorial cartoons, one from June 1917 while on staff at The Cleveland Leader and one for Central Press, August 1928.

Roland J Scott was an Indianapolis-born cartoonist, active beginning in the World War One era for several Midwest papers. His real career was with us. He joined Editor’s Feature Service in 1926, the precursor to Central Press Association, a secondary Hearst syndicate. There he launched a one-column panel known as Sally’s Sallies. There was a fad of sorts for these panels in the late 1920s, centered on feminine fads and foibles. Others were Oh Margy! By John Held Jr., The Boy Friend by Marge Buell and Flapper Fanny by Ethel Hays.

Margy became a full strip for a little while, Fanny became one for a long while, but Sally’s Sallies outlasted them all, though never expanding from a one-panel gag, and without any recurring characters, for over forty years, 1926-1967. 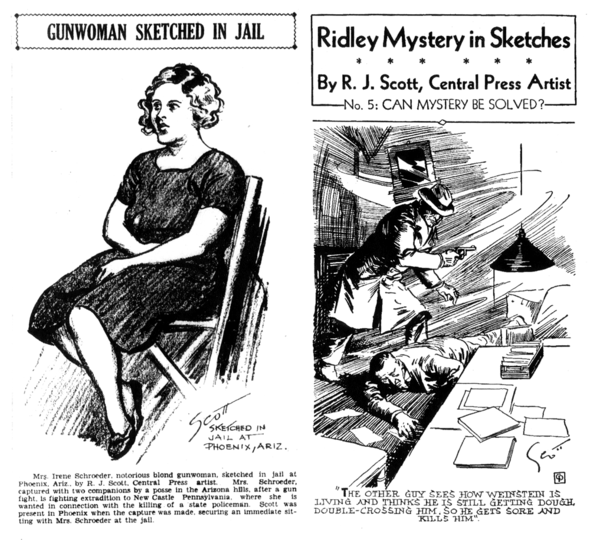 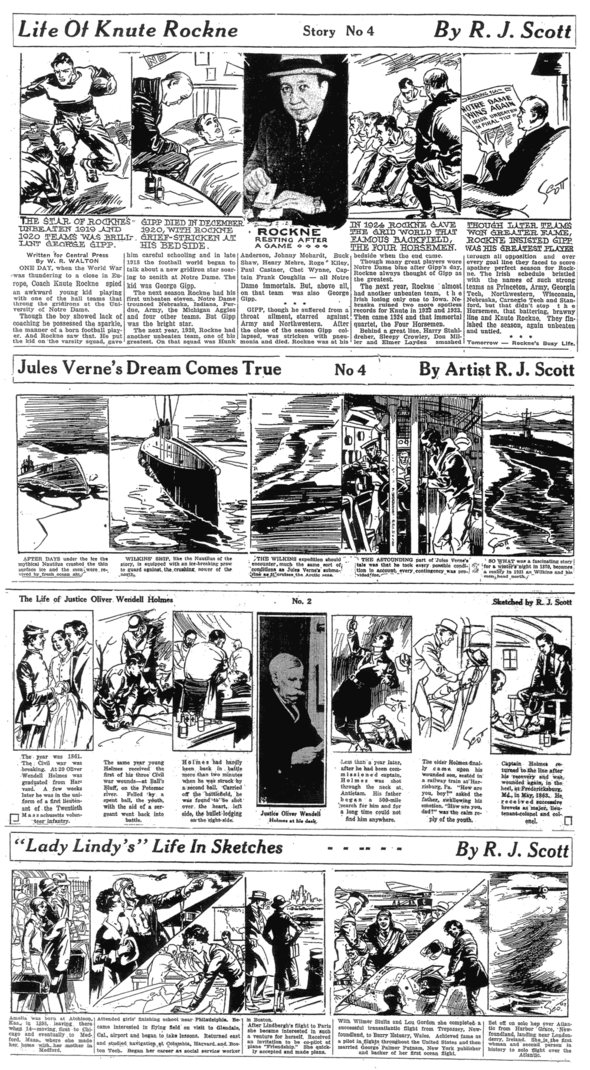 Some short series news comic strips that Scott would do in the early 1930s, on events in the news or celebrities in the spotlight like boxer Max Schmeling or New York Mayor Jimmy Walker.

His most famous creation was Scott’s Scrap Book, a catch-all collection of tidbits covering pretty much anything in the world of science, history, nature, and strange customs. In other words, a feature similar to Ripley’s Believe it Or Not. There were several in those days from competing syndicates,  the most  famous being John Hix’s Strange As It Seems (1928-70) over at McClure Newspaper Syndicate, later United Features.

Although King Features did the syndicating for his feature, Ripley held the copyright on his creation. Scott’s panel was one we owned, and it had become a pretty widespread panel by being in the Central Press lineup. (Incidentally, the Central Press brand was, bar the “Central Press Crossword Puzzle,” dropped in March 1937, and all their titles became KFS).

Originally, the panel had the ungainly title of “Did You Know? The Illustrated Question Box” when it debuted on 23 March 1931. The format included a Ripley-type cartoon of facts and figures, both amazing and trite, with a “box” of questions and answers, even jokes and a horoscope! These were dumped in a matter of weeks, and the panel was now just “Did You Know?” The title was officially changed in December 1932 to “Scott’s Scrapbook,” but some papers kept on calling it by its old title for years. At least one paper, the Yonkers, N.Y. Herald-Statesman, came up with their own new title, “Now You Know.” The last page in the scrap book was written the same day Sally was retired, 1 July 1967. 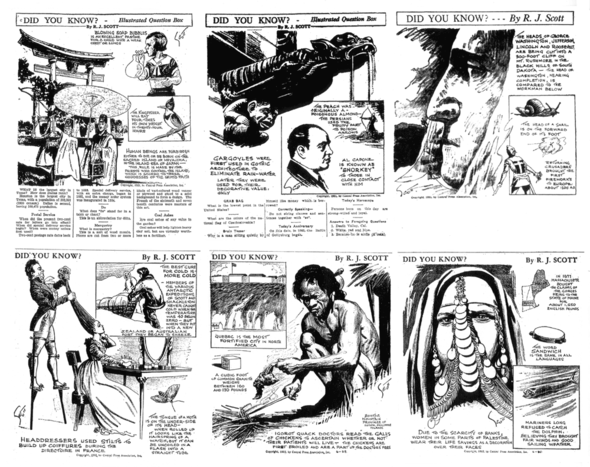 Maggie was always the frightful rolling pin-wielding termagant we know and shudder from, right from the start of the strip. In real life, poor Jiggs would’ve been beaten to death before 1914.  Fortunately, he had the resilience that cartoon characters have, the super power to sustain nasty beatings and make readers laugh at the same time.

The Kellys did get rich brick by brick, but Mr. Kelly didn’t just wholesale bricks, he was a contractor, and when you get city contracts, you get influence, and you get rich.

A hundred years ago, we did a few posts on Bringing Up Father on his second anniversary—take a peek:

Sounds like on Sunday your father read a Hearst paper’s PUCK section. Nothing but the best!