Thanks for tuning in to Channel Chuckles, a gag panel that was created by comics great Bil Keane (1922-2011) for the Register & Tribune syndicate, running from 1954 to 1976. It’s a funny feature, I guess provided you get the jokes. It was a clever idea because you could never run out of material, with TV’s shows, personalities and issues constantly changing. Keane is, of course, known for The Family Circus, the warm, wholesome family panel that he began in 1960 and that continues today, drawn by his son, Jeff. You wouldn’t know it from the Circus that Keane also had a sharp, satiric wit. Channel Chuckles could have been part of MAD magazine.

Since your Archivist is old enough to remember the great moments of TV, not to mention some awful ones, I’ll drop off a few panels and if you’re too young to remember the golden age of video, or you are old enough, but weren’t paying attention, I’ll leave a few notes below: 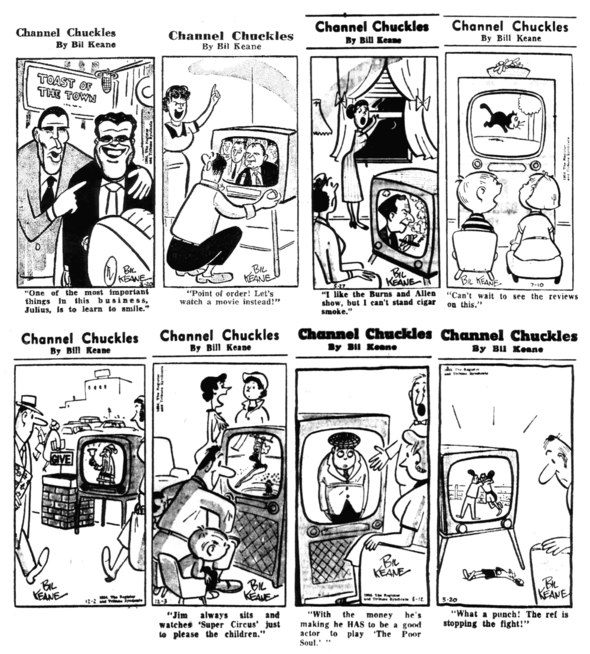 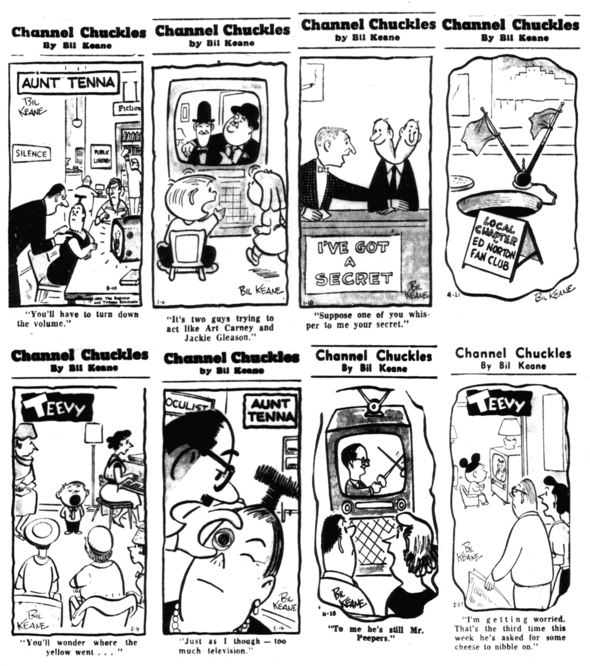 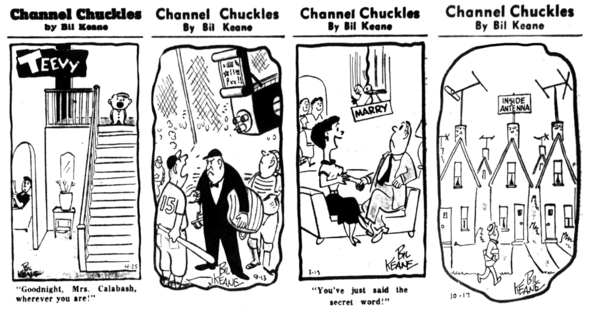 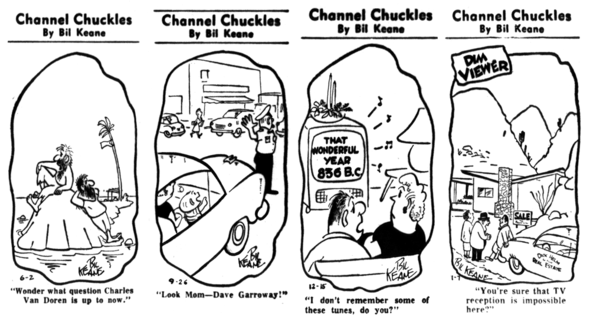 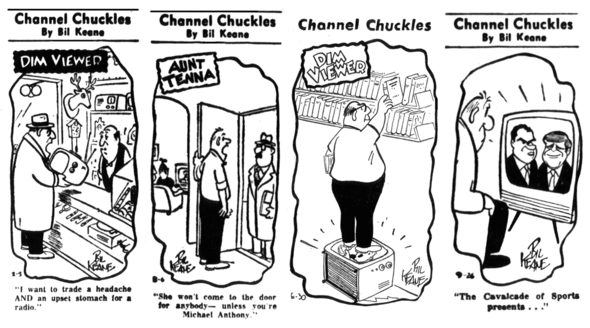 (1)     Famously deadpanned Ed Sullivan tries to cheer famously fired Julius La Rosa on his show. Keane had some severe caricatures going.
(2)      During the televised Army-McCarthy hearings, corrections and objections were raised with the call of “Point of Order!”
(3)     Luscious blonde Mary Hartline was often cited as attracting grown men to look in on “Super Circus.”
(4)    This was one of Jackie Gleason’s characters, a pathos-craving little fellow whipped by life, the polar opposite of the bombastic “Great One.”
(5)      “Aunt Tenna” was a re-occurring character that was obsessed with all things TV. Apparently her head formed an aerial.
(6)     Laurel & Hardy were long-standing veterans on TV since the 1940s, thanks to reruns of their old films, yet they did only one actual show in the United States.
(7)      Gary Moore on his great panel show. He was famous for a crew cut, and Keane identified the show so closely with its sponsor, Winston, he put a picture of one on the wall here.
(8)    “Ed Norton” was the sewer-working character Art Carney played on “The Honeymooners.”
(9)     “Teevy” was another inhabitant of the Channel, a small boy who learned everything from the tube. Here, giving a recital, he quotes a singing commercial still not out of the minds of those who heard it then…. The second line of the jingle is: “…When you brush your teeth with Pep-So-Dent!”
(10)  Wally Cox, TV’s consummate nerd, went from shy schoolteacher, Mr. Peepers, to a strange adventure comedy, “Adventures of Hiram Holiday,” where he acted more like Douglas Fairbanks. Few remember it now, I will guess.
(11)  The headgear instantly recognizable still originally were licensing items from The Mickey Mouse Club.
(12)  Jimmy Durante’s famous parting line.
(13)  On Groucho Marx’s game show, a duck doll came down from the rafters with a prize if you said the night’s secret word.
(14)  Remember when every roof of every house had an aerial? I even put a few up in my time. We had to have a separate one for UHF, too.
(15)  Van Doren was the crooked super-prize winner on the super-crooked game show Twenty One. Months after exposure and ruin, Keane brings him up here.
(16)   Before the two-pronged “Peace” symbol of hippie days, Today show hosts used the open palm version, like Native Americans, to close the show.
(17)  On the Gary Moore Show, a musical salute to one specific year’s output was a regular feature, though it was usually one within the memory span of its viewers.
(18)  “Dim Viewer” was a Keane favorite. He was the opposite of Aunt Tenna of Teevee, because he hated everything he saw.
(19)  “Michael Anthony” was the character essayed by Marvin Miller who handed out million dollar checks to random strangers on “The Millionaire.”
(20)  Keane likened the upcoming Nixon-Kennedy TV debate to a contest worthy of the sports anthology program,  “Gillette Cavalcade of Sports.“

And now, to answer a letter from last week:

Yes, Howarth was very much a Victorian illustrator. He had the ability to draw very precisely and quickly, leaving a huge legacy.  If he had lived longer, he might have made something still remembered. When he left Hearst in 1907, they had another artist take over E. Z. Mark, Unsigned. It might have been Merle Johnson. He couldn’t copy Howarth’s style, and so E.Z. was retired by the summer of 1907.