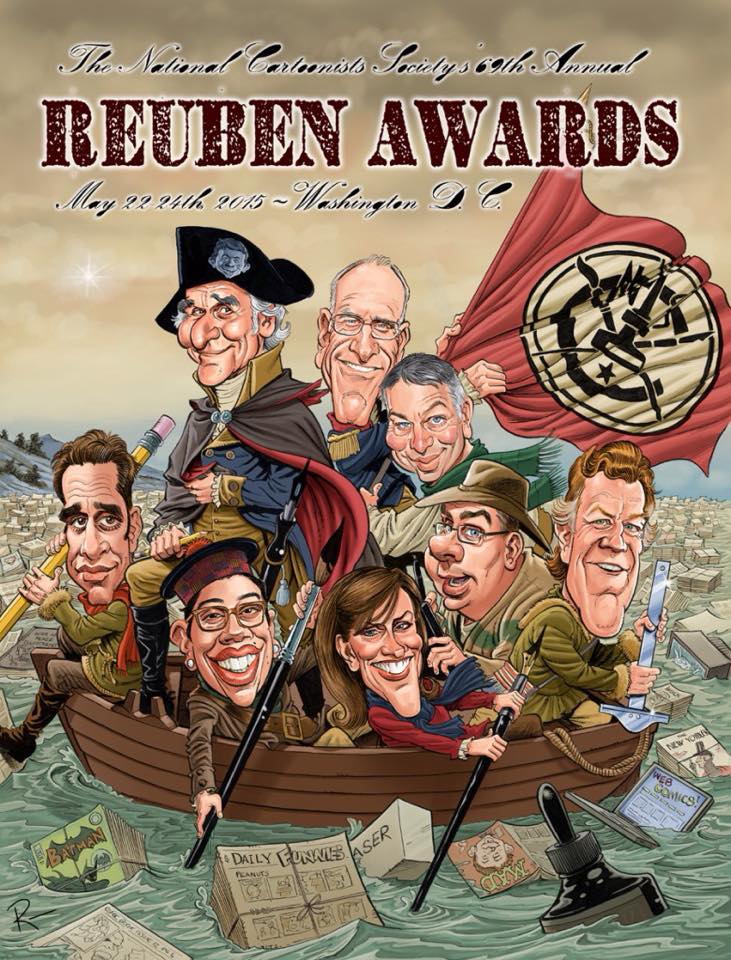 Last weekend Steve and I were in Washington where we played tourists, hung out with cartoonist colleagues, and participated in the giant annual group hug known as the National Cartoonists Society Reuben Awards weekend.

The Reubens attract the best in the business from all walks of the art. It’s a grand affair. Sort of the cartooning world’s answer to the Oscars.

Washington was a great city for this monumental event. Lots of us went on mini excursions between sessions and parties. Thursday night, Teresa Roberts-Logan (“Fog Of Worry”), Barbara Dale (of greeting card fame), Greg Walker (“Beetle Bailey”) and I joined Matt Wuerker (editorial cartoonist for Politico) and Mike Kahn (author of “‘What Fools These Mortals Be!’ The Story of Puck – America’s First and Most Influential Magazine of Color Political Cartoons” ) who spoke on cartooning and free speech at President Lincoln’s Cottage at the Soldiers’ Home. Lincoln used the cottage throughout his presidency as a getaway from the White House (and very likely, Mary Todd too). He wrote the Emancipation Proclamation here. A really interesting place, and intact (except for the furniture), just as Mr. Lincoln left it on the day before his assassination.

Steve, Gary Brookins (“Shoe,” “Pluggers”) and I wandered around near the White House one afternoon and had lunch at the velvet-wrapped Off The Record bar in the Hay-Adams Hotel just across Lafayette Park from 1600 Pennsylvania Avenue. The big draw was the bar’s collection of political cartoons and caricatures by Richard Thompson (“Cul de Sac”), Matt Wuerker, Ann Telneas (editorial cartoon animator, Washington Post), Ron Coddington, and Ed Vallaton. A must-see if ever in DC.

My pal, MAD Magazine’s Rich Powell, and I plied the Potomac in kayaks one morning, leisurely paddling from Key Bridge to Memorial Bridge, passing by The Watergate, Kennedy Center, Lincoln Memorial (within sight of the Washington Monument) and Arlington National Cemetery — apropos for Memorial Day weekend.

The rest of the time was packed with cartoonists’ presentations — most notably, a panel showcasing the one and only Mort Drucker of MAD Magazine fame, and one discussing free speech in the aftermath of the Charlie Hebdo attacks, with panelists Roslyn Mazer (who represented the Association of American Editorial Cartoonists in an amicus brief for the famous Hustler v Falwell case  in 1987), Joel Pett (editorial cartoonist, The Lexington Herald-Leader), Garry Trudeau (“Doonesbury”), and moderated by Ann Telnaes. The free speech panel was especially raucous, and felt more like an AAEC session than one usually found at the more lighthearted Reubens.

The black-tie Reuben Awards dinner was lavish as always with envelopes torn “and the winner is” moments. Hosted again this year by the drop-dead funny cartoonist/comedian Jason Chatfield (“Ginger Meggs”). And as usual, there were parody videos (“House of Cartoons”) and Tom Gammill madness.

Congratulations to all the winners! Great to see so many women winning this year (six in all), especially The New Yorker’s amazing Roz Chast who was awarded this year’s Reuben statuette as Cartoonist Of The Year. And Thanks a million to Tom Richmond and the lovely Anna, for four magnificent years as NCS president, marked by four phenomenal Reuben weekends.

A Haunted Hotel Farewell Party on Sunday night had many attendees and guests dressed as their favorite ghost, goblin or spooky character. Our hotel for the Reubens, The Omni Shoreham, is known for being haunted. I went in Charlie Brown’s holey ghost costume from “A Charlie Brown Halloween.”

Thought you all might like to see some photos and video clips. Be warned, I’m all dressed up in a couple of pics — wearing socks and clean shaven!

More Reuben Awards madness from Tom Gammill (“The Doozies”). This time, after a heartbreak, he gets the NCS LA Chapter in on it performing a positively Pythonesque tune.