Hello, all you comics gourmets-

Vintage Madness concluded weeks ago, but we have not forgotten that Popeye was a real contender. The team here at Comics Kingdom has been working hard behind the scenes and I have the pleasure of announcing a challenge for you: Visit and Like our COMICS KINGDOM Facebook page and SHARE with your friends the Thimble Theatre strip that shows the first appearance of Popeye. If we get enough shares, we will consider adding our Thimble Theatre archive to the Vintage Comics section as a bonus and thank you to our fans!

You will remember last year when I presented the first daily episode of Segar’s Thimble Theatre from 1919, as well as several 1920’s Sundays, here:

Today I have a real treat: the first six weeks of the Sunday strip. As far as I know, they have never been reprinted, although I did show a battered copy of the 8 February 1925 strip last year. These have been in my personal collection for many years, although I only dug them up recently. The condition is a problem, as the first few are in really awful condition, crumbled away at the edges.  But, then again, so are the Dead Sea Scrolls.

They appeared in the Hearst flagship newspaper, The New York American,  where, after about eight weeks, the Sunday comic was traded off to the Evening Journal’s Saturday section, where it stayed until the 1960s. It may have appeared in one of the other major titles in the chain, but I have not seen it. In fact, I’ve been collecting newspapers for fifty years, and I’ve never come across any other copies, so I figure that, damaged or not, fans should have the opportunity to see them.

The first one is undated, as are the second and third one also, and assigned only small “No. 1,” No. 2” and “No 3” down at the bottom of the pages.

The feature debuted on 25 January 1925, and I just managed to miss that anniversary, but Thimble Theatre Sundays are now nearly halfway through their 90th year. 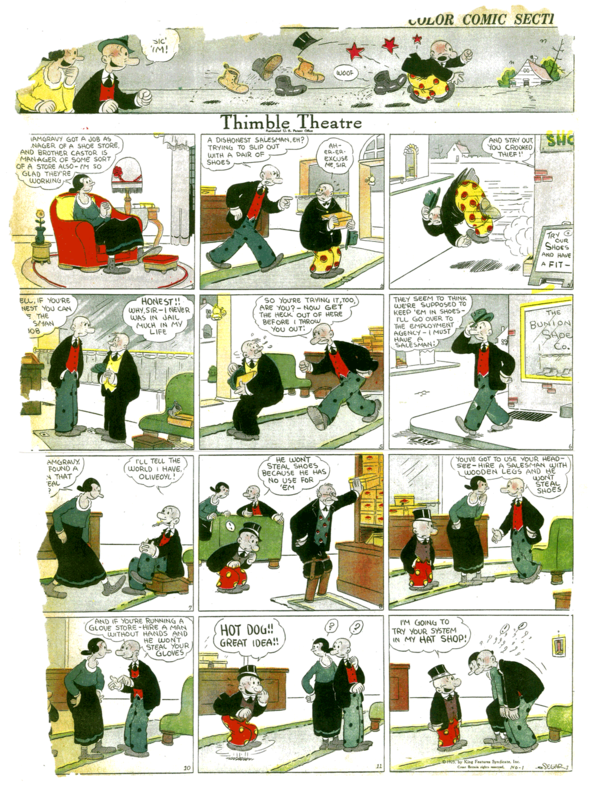 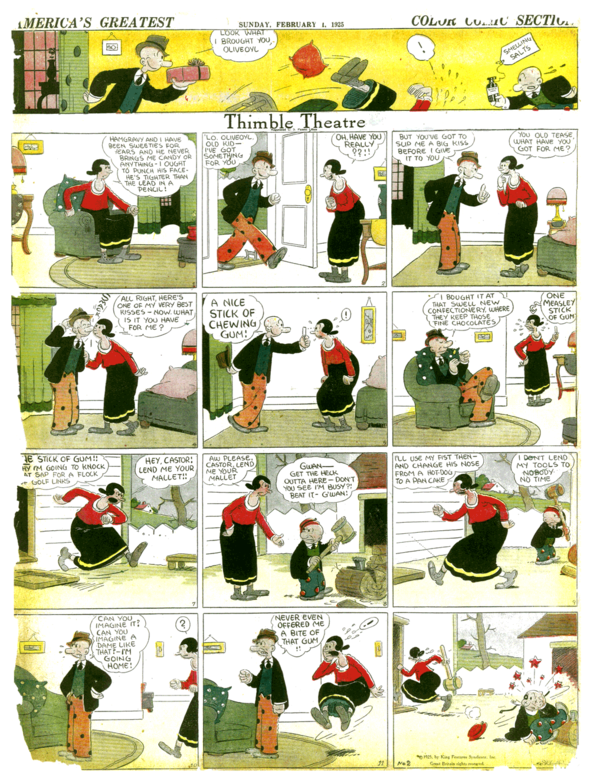 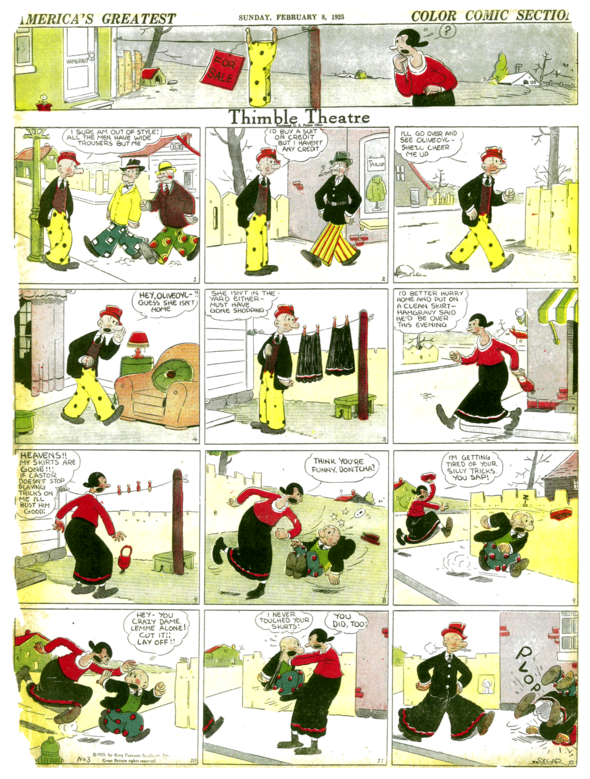 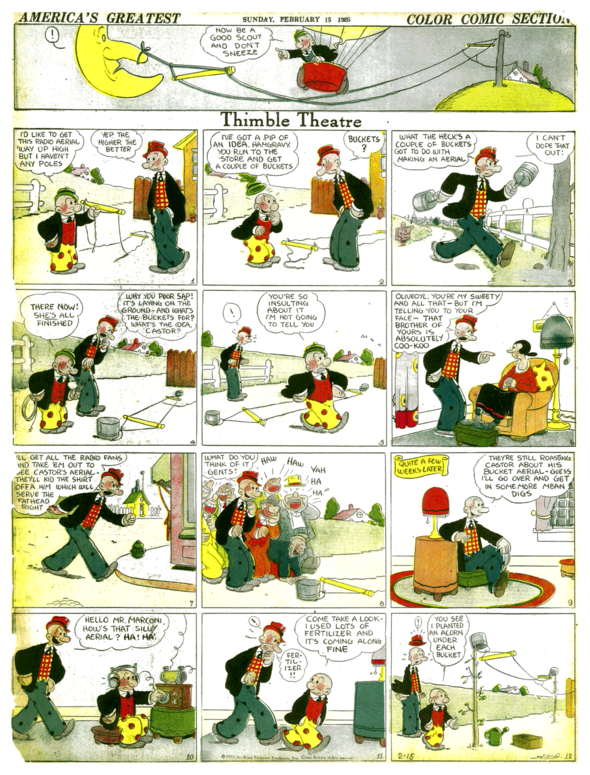 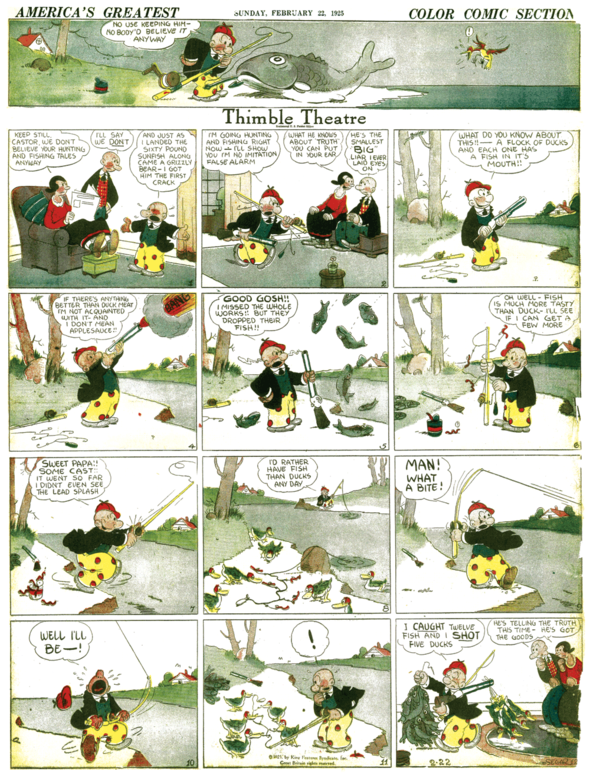 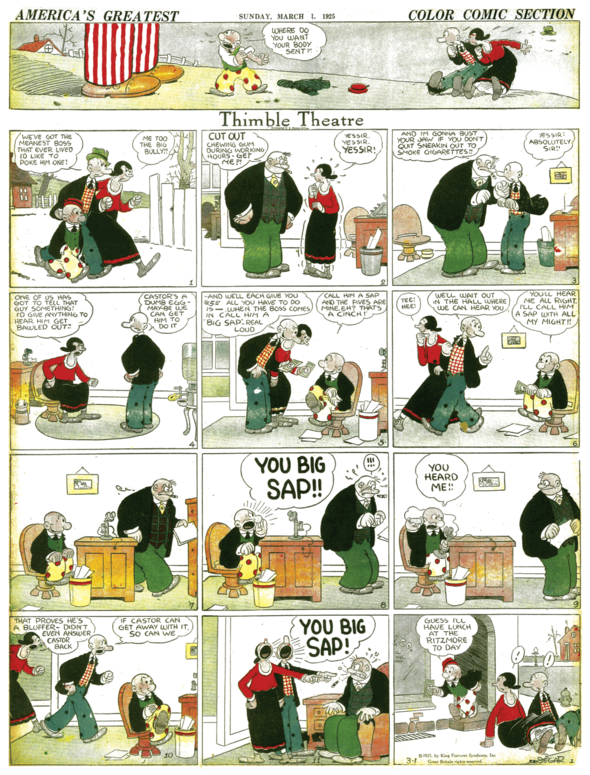 Hope you are impressed. Segar was always good with politically incorrect gags.

To King of Kitchener-

Private Buck is unfortunately, among the titles we don’t have in our archives. I had to go to other sources for the ones we displayed last week.  The material is ultimately too topical, and after the war ended, the whole body of panels were out of date,  permanently too stale to ever be reused in secondary venues like comic books or foreign language sales abroad.  So we didn’t save them, although neither  did we keep the seven postwar years of the renamed “Private Life of Buck,” which recounted our hero’s daily struggles in the nine-to-five office world.

Glad you liked Private Buck. Of course, with a distance of so many years, most of the people that lived through the war years are gone or very old now, belying the images of the men doing the fighting left to us in films, cartoons , song and story, who are always forever young and vigorous.

Many of the gags and references will make little sense to the current generation; few will know what a “Gremlin” or a “Goose Step” might be. Most would be horrified to see a flame thrower or a bomb drop as  cartoon comedy points. Maybe we had a more robust sense of humor then, which you’d need to have through such  harrowing times.