An Open Letter to the Supreme Court 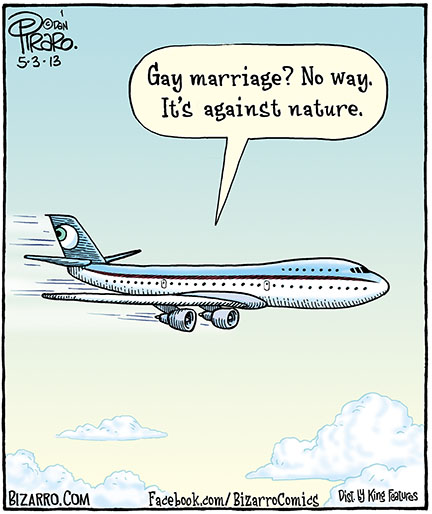 Try as I might to stay out of politics in my comics, some issues just grab me by the throat and force my hand. This is one such issue.

No matter how long I live I don’t think I’ll ever understand why anyone cares who anyone else marries.

Personally, I don’t think the government should be involved in marriage issues whatsoever. Marriage should be left to the individuals entering into it: a civil contract, an agreement on a handshake, a religious ceremony if you like, a costume party in the woods, whatever makes sense to the people doing it. But the government’s interest in the institution is entirely misplaced in this day and age. Why do married people get tax breaks, special treatment from hospitals and insurance companies, or any special treatment at all from anyone, unless the powers-that-be are trying to direct and control society to their own end? We know from history that this never turns out well for the rest of us.

Some would say that family arrangements outside of two heterosexuals legally bound to each other for life work to erode society but there is no evidence of this in the real world. Families consist (and have always consisted) of virtually every combination of people, places, and things that one can imagine, and yet the world has not spiraled into chaos as a result. Children need loving adults in their lives, as many as they can get, and never does it occur to them to ask what kind of thingy the people who care for them have between their legs.

Outside of the archaic and fearful “rules” of certain religions, there are no logical objections to an all-inclusive attitude toward marriage. And religious notions are not something America is supposed to be legislating.

So if the government is going to keep their grimy hands in the marriage business, they must open the institution to anyone willing to pay the price of admission. Anything else would be a transparent attempt to control the direction of the human race, which is as futile as attempting to control the weather. (Although we’ve had some luck controlling the climate, and look where that’s gotten us.)