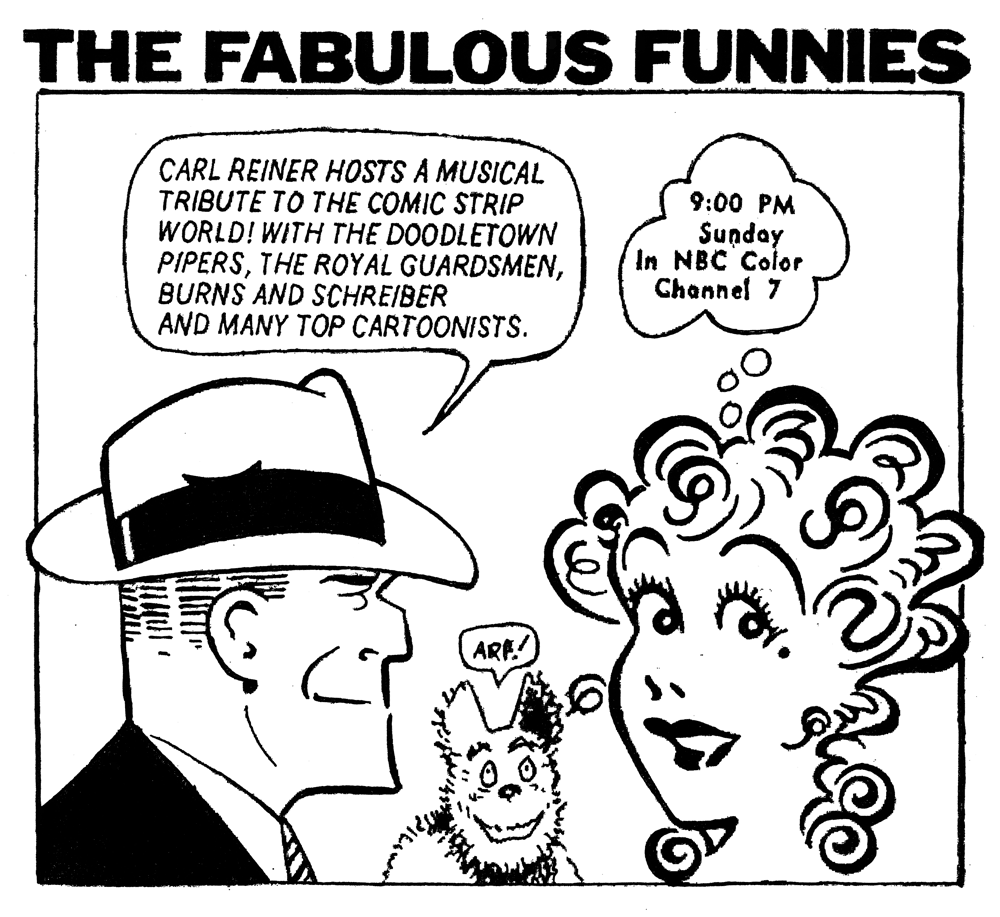 In my entry on radio a few weeks ago I described how the Sunday comics were at one time read over the radio and later tried on television.  It got me thinking about the relationship between actual comic strips and TV, and I resolved it’s never been very strong. The non-moving, still cartoon panels really aren’t workable on a medium suited for action. I also recalled something from my childhood, a TV special on my pet subject, something called “The Fabulous Funnies,” an NBC production of 1968.

It was in production, according to publicity, for most of the year of 1967. It was produced by Lee Mendelson, most famous for the long-running series of Charlie Brown specials, and co-produced by George Schlatter, a specialist in specials, everything from “The Jerry Lewis MDA Labor Day Telethon” to a salute to Moms Mabley.

For many days before it ran, “The Fabulous Funnies” was heavily promoted in print and on air. The show promised to be everything about comics, their history, their meaning, and words from their superstar creators, which fired my imagination. At that time, many of the giants of the first half of the century were still living. I couldn’t wait. 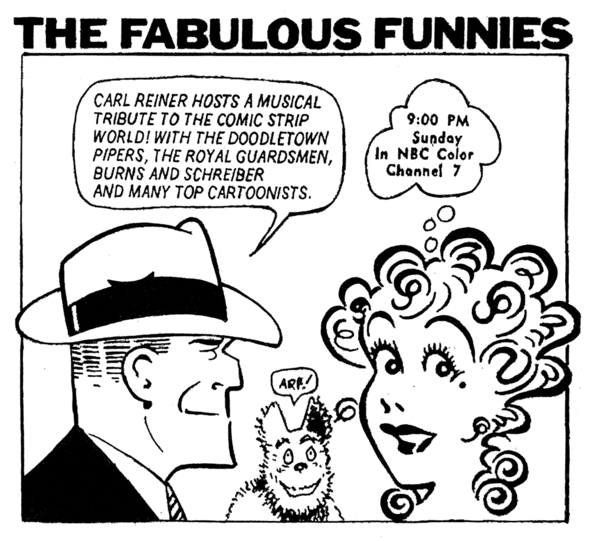 Unfortunately, it was nothing that I had hoped for. In fact, it was very soon apparent that this was made by men who had no intention of taking comics seriously, and instead offered what the press release promised: “This is not merely a talk show. There are large portions of pure entertainment…” The purity insured no contamination from enjoyment.

Instead of wasting too much time talking about the little pictures that don’t move, they threw at us the even-then too-awful dancing/singing ensemble The Doodletown Pipers, prancing to various songs written about comic strip stars. One such trip around the sound stage had Ken Berry leading them in a number from the Lil’ Abner musical of about ten years earlier. More of the “pure entertainment” included the one-hit wonders The Royal Guardsmen singing a music video-style version of their one hit, “Snoopy and The Red Baron.”  Also included were the now-forgotten, awful comedy team of Burns & Schreiber, eating up more time in a skit about how foolish people are to read comics.

The host of this mishmash was Carl Reiner, best remembered as the always angry, bullying boss Alan Brady on the Dick Van Dyke Show. He breezed through some quick highlights of comics history, something about the Yellow Kid, mmmm, Mutt & Jeff, mmm Dick Tracy … whatever, as some of the dog-eared illustrations from the several books on the subject existing in 1967, like Cartoon Cavalcade (1943) by Thomas Craven, are seen. Then, after a visit to see how the comic section is produced at the Los Angeles Times, Carl becomes a limited-animated cartoon caricature and meets some strip characters, all looking like something in a ‘60s cereal commercial. 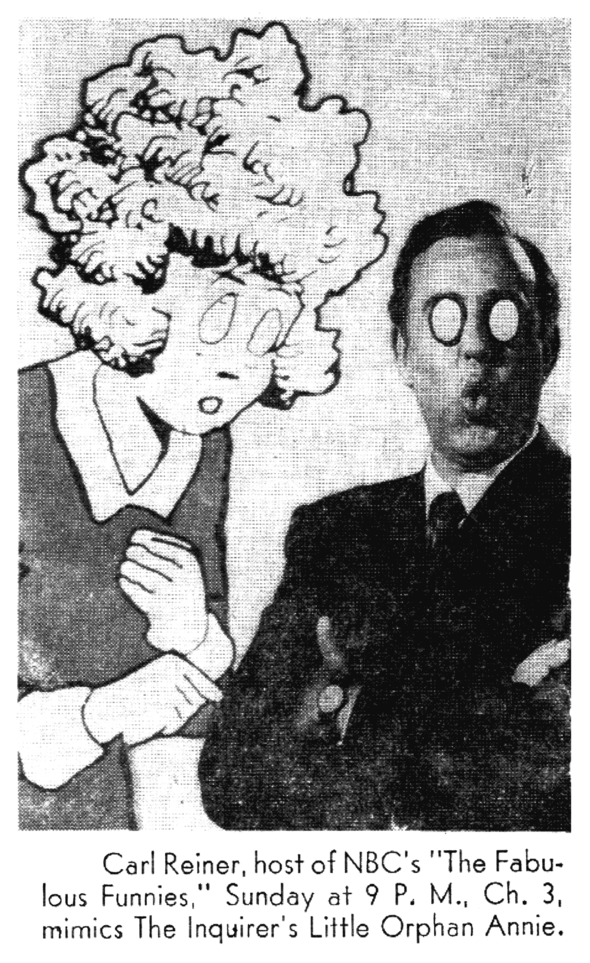 Carl Reiner gathers up all the dignity worthy to host THE FABULOUS FUNNIES.

Now, remember, I have not seen this since it was rerun as an obscure summer filler in 1976, but if the information offered in the publicity is any indication, the research must have been harrowing.  A paragraph on comics clichés includes,  “You will hear and see (via Mendelson’s animation)…Andy Gump with his ‘Oh My Gosh!’ (his catchphrase was “Oh. Min!” ) and Krazy Kat with ‘You Dingbat.’” (Huh?)

They promised we would see the artists, and we do, in microlength flashes that give us nothing, not even, if memory serves, more than one or two sound bytes. 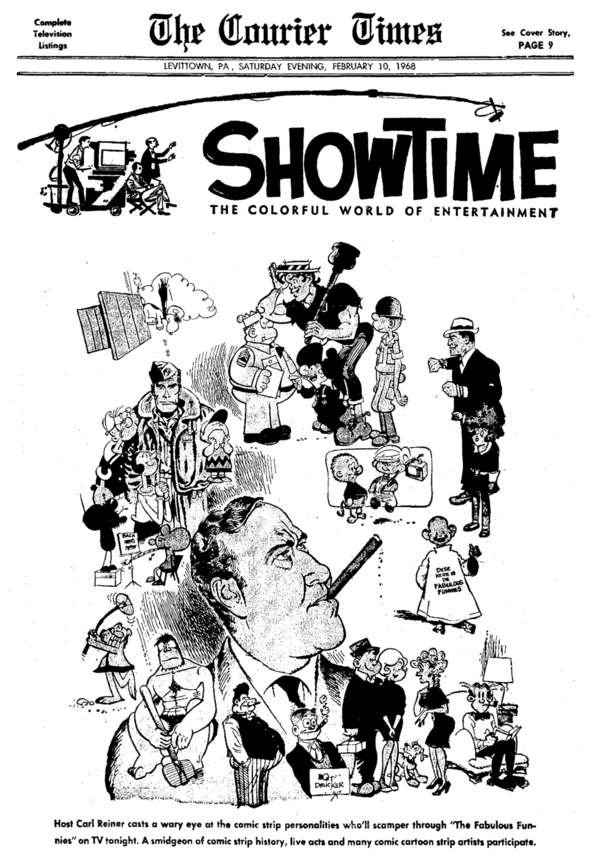 A really dreadful special, embarrassing to watch. Yet I must add that it wasn’t the worst special of the decade. That honor goes to “Salute To Stan Laurel” (1965), which I believe is now accessible on the net. This one is oddly obscure though, and it as of yet has no references to it in the IMDb lists. 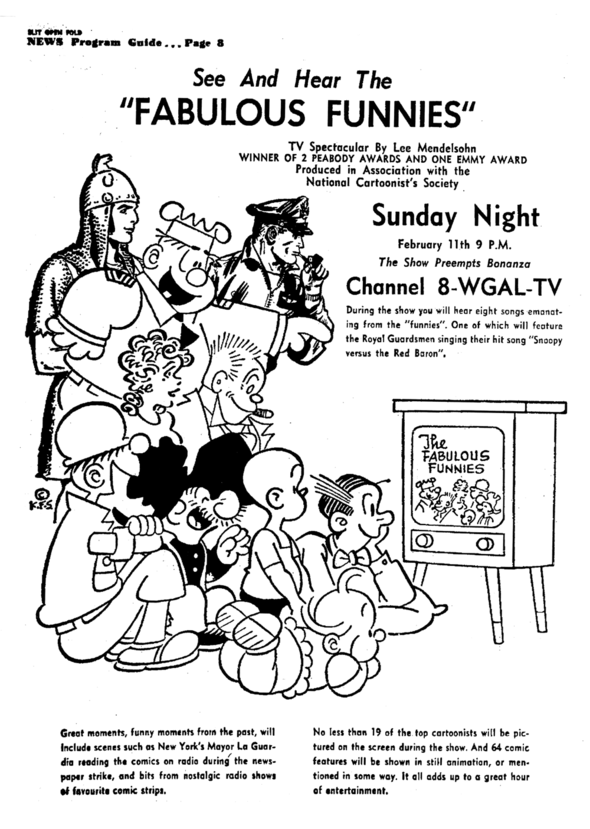 A King Features-generated spot does away with all those unnecessary Tribune and NEA characters.

To John W. Kennedy:
I don’t know much about 3-D modeling. I think Kemble just had a good eye for body movement and exagerated reactions.

To Mark Kausler–
The black stereotypes seen in everyday media a hundred years ago were not intended to be edgy, certainly not in the realm of the “scatalogical.”  Things like Kemble’s cartoons were considered lighthearted family fare, just trying to evoke a laugh. Black caricitures were readily identified as clowns and funmakers in the American stage tradition, where a hundred years of minstrel shows left their impression on popular culture.