When the folks from King Features shared this week’s post from the Archivist with me, I read through it and almost instinctively and immediately reached for a bag of popcorn. I knew that it would be a time capsule of great, colorful and iconic visuals.

The truly exciting element of the bodies of work below is the consistent use of … OUR IMAGINATION.  See, back then, they had the romance, swashbuckling, space travel, and cowboys saving the day. However, most of what you got was an earful (radio) or an eye full (cartoons) and the opportunity to let your mind do the rest.

Take a look at what the King Features archivist pulled out of the vault, put your arms around it, take a deep breath (love that old musty smell!)  Close your eyes, (do that part when you’re done reading), and enjoy the color and depth of where it all began. Oh, and I love how this blog post is always signed at the end.

The Archivist.” – Now that sounds like a great radio strip!

As a nod to our guest blogger, Will Roberts, humorist and host of the “Will Roberts’ Weekly Telegram”radio show, I thought I’d take a look in the archives this week and see what I could find with a radio connection.

There were only two Hearst strips I can think of with “Radio” in the title. First, the extremely obscure “RADIO CATTS” by Chester Gould in 1924, designed to be a new feature when we launched the New York City tabloid, The Daily Mirror (1924-1950).  The second was RADIO PATROL, (1934-1950) about two patrolman in a radio-dispatched prowl car. But there is some connection with comics and the airwaves from the start.

The RADIO CATTS, first strip of a short-lived Hearst comic of 1924 by the pre-Dick Tracy Chester Gould. 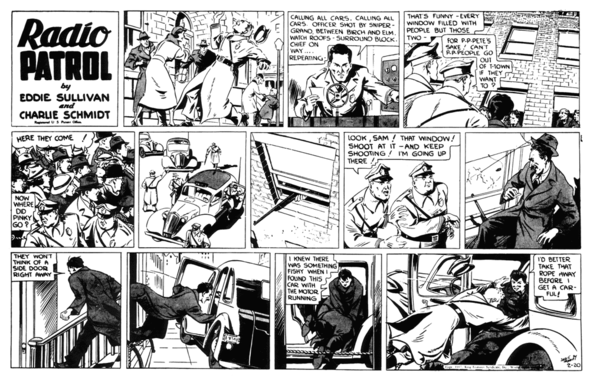 Some radio series based on Hearst strips:

As early as 1930, Hearst Corporation was putting out a syndicated line of radio shows based on the KFS characters. In those days, these “canned” shows were sold as large phonograph records the stations would play. These would usually be the great granddaddies of “infomercials,” a product-centric show that might feature a comic skit or a dance band. Often, these were supposed to be used once, with instructions for them to be destroyed after playing.  Sadly, most of the time they were. Virtually nothing exists of the first ten years of broadcasting today, and what does remain are samples of these canned products.  At least one of the initial offerings, from the 1930 “Bringing Up Father” series, has survived.

As time went on, acetate recording discs came into use by the networks, and a far more complete picture of our radio history starts in the mid-1930s, when more Hearst series came about. For instance, in 1935 a Flash Gordon series starred Gale Gordon, (no relation), the future TV sitcom star famous for playing the roles of Mr. Wilson on Dennis The Menace and Mr. Mooney on The Lucy Show. Their sponsor was Grove’s Emulsified Nose Drops, a cold remedy being pitched for kids with the reassuring promise that it was “just like sweet honey poured down your nose.” The series only lasted 26 weeks.

The Popeye radio show, which ran from 1935 to 1937, also had a sponsor quirk. When Popeye got into a jam, he didn’t reach for a can of spinach; instead he whipped out a box of Wheatena cereal! They even reworked his theme song to include Wheatena references.

The most successful of the KFS shows was, of course, BLONDIE, starring the same actors as in the feature film series, Penny Singleton in the lead and Arthur Lake as Dagwood. It ran from 1939 to 1950. 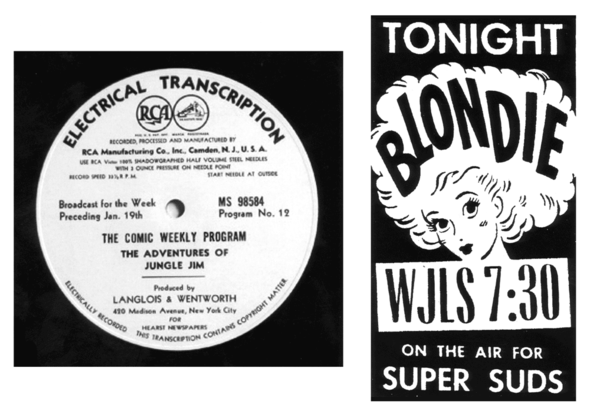 The label of a syndicated disc for radio replay of the JUNGLE JIM series, 1936, and a promo for the BLONDIE show, 1945.

Many early radio stations were owned by newspapers, and it was only a natural extension of self-promotion to have the comics read over the air, so they would have a kid-friendly reader make a special show of it.  Most famous of them was New York’s onetime circus clown, “Uncle Don” Carney, who read the comics over WOR.

The Hearst newspaper’s brand-name Puck Sunday comic section had a syndicated series offered in the postwar years called the “Comic Weekly Man,” which would be sponsored by a local Hearst paper.

For a while, someone reading the comics on TV was seen in many markets.  In New York at WPIX, where voice artist Danny Webb made a try at it in the 1940s, and, in Philadelphia, kiddie show hosts like Chief Halftown did it into the early 1960s. But showing a panel at a time as the word balloons are read was pretty lame competition to the cowboys and animated cartoons on other channels, so it wasn’t continued.

That’s all she wrote on that. Meanwhile, be sure to check out this week’s guest blogger, Will Roberts,  host of the “Will Roberts’ Weekly Telegram” radio show. His website is WillSays.com.

I close this week’s entry with a sad note. A very dear associate of the Archivist, Mr.  Cole Johnson, passed away on 23 January.  He gave us access to a most remarkable collection and his amazingly deep well of comics knowledge. His assistance will be truly missed.

We’ve had many great executive talents here at KFS, but we were only referring to make-believe bosses here. There are many more I could have included, but there’s only so much space.

Many of the situations once seen in the big business world of the good old days no longer pertain. The twentieth century office is just a memory.  Automation and computers have eliminated many people, so there are fewer opportunities for the boss to be an office despot. I left out OFFICE HOURS, as it was mainly gag panel without characters like the strips we saw here last week, but if you like your humor spread amongst the file folders and carbon papers, look in at

See you all here next week,