J.T. and Dale, our guest bloggers from J.T. and Dale Talk Jobs, wanted to talk to our cartoonists about jobs this week!

Lots of cartoonists tried out different careers before moving to cartooning—and while none of those jobs are QUITE as super as cartooning,  they definitely run the gamut from fantastic to…well, crummy.

So J.T. and Dale asked our cartoonists to talk about previous bad jobs—and what some of the signs were that made them decide it was time to get out.  Some of our cartoonists told stories about their characters, and the tough decisions they’ve had to make about jobs.

Dethany and Wendy ponder the downsides to both staying and leaving.

As people might know, I am a PhD physicist. In my last real job I was running a program for the State of Florida to develop an energy efficient building code.  I also provided State input to the Federal study on nuclear energy waste disposal. When the building code was completed I resigned my job, and was considering a position at Florida State University. I said to hell with it and started drawing cartoons. I never looked back. It was the best decision I ever made in my life.

Mr. Wilson had some amazing experiences during his years as a mailman…or so he says. 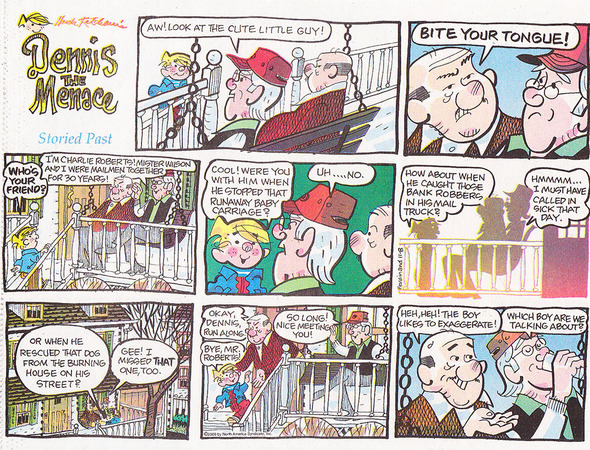 I had a stressful job in the pharmaceutical industry, which got worse and worse over a period of about 3 months. One day, I was so overwhelmed I couldn’t even read what was on my computer, so I walked out and never went back.

After graduating from Journalism School at Missouri University where I was editor of the school magazine Dell Publishing asked me to join them and edit three magazines, i,000 Jokes Magazine, Family Album. and Western Stars for a weekly salary of $45 a week. I had a staff of three. After a couple of months they decided I could edit the magazines myself and fired the two others. Then they also decided to lower my salary to $40 a week. Since I was brand new in New York and needed a job, I had to accept this blow and carried on, doing a better job than had been done by the previous editor but feeling cheated. On the side I did magazine humor cartoons and became the top seller in the country that year. Even with both jobs I didn’t make a decent living. I heard that comic strip cartoonists got really rich so I decided to give that a try. I sat down one night and drew some sample strips, took them to King Features Syndicate the next day and sold it. I was very disappointed that I was still treated poorly until the strip became very successful, demanded a million dollar bonus and got it,
Since then I’ve seen a lot of talented people held in a menial status while their bosses reap the benefit of their talent.

Years ago I wrote a story about sexual harassment in the workplace involving Mary’s neighbor Ben and his overly aggressive boss.  Luckily for him, the problem was eventually resolved and he didn’t have to quit.