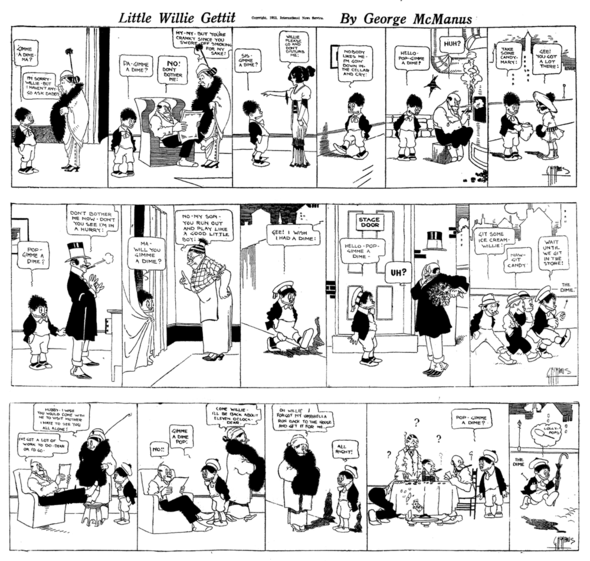 I have got another oldie for you, a “Golden” oldie, perhaps, but you might want to reserve judgment.

It’s a long forgotten weekday series by the great George McManus called LITTLE WILLIE GETTIT, which debuted in September 1913. This was a year into his long association with the Hearst Corporation, and only nine months after creating his signature series, BRINGING UP FATHER. See HERE and HERE.

In those days, there weren’t so much daily strips as weekday ones. These were usually short-lived,being  basically a single gag repeated with slight changes, and McManus did several of these. See more HERE.

As 1913 progressed, it became apparent that Jiggs and Maggie’s antics in BRINGING UP FATHER were going to be another hit for McManus, who had created many nationally syndicated strips during his years with the Pulitzer organization (1904-12), such as PANHANDLE PETE, SPARERIBS AND GRAVY and THE NEWLYWEDS AND THEIR BABY, which continued on with Hearst under the new title, THEIR ONLY CHILD. See HERE.

Slowly, the other series dropped off and left BRINGING UP FATHER as the only weekday (and soon, actual daily) cartoon McManus had to do, but one last short series was left, that being WILLIE GETTIT.

Willie was a real one-note gag strip, that being a small boy who is paid off to keep quiet about some indiscretion he has witnessed a family member engaged in, usually his father. Odd thing about it … though Willie’s appearance is consistent throughout, his parents, Pa especially,   sometimes has no resemblance to the character seen in the previous strip. The last time the Gettit family was seen was in April, 1914. Until now. 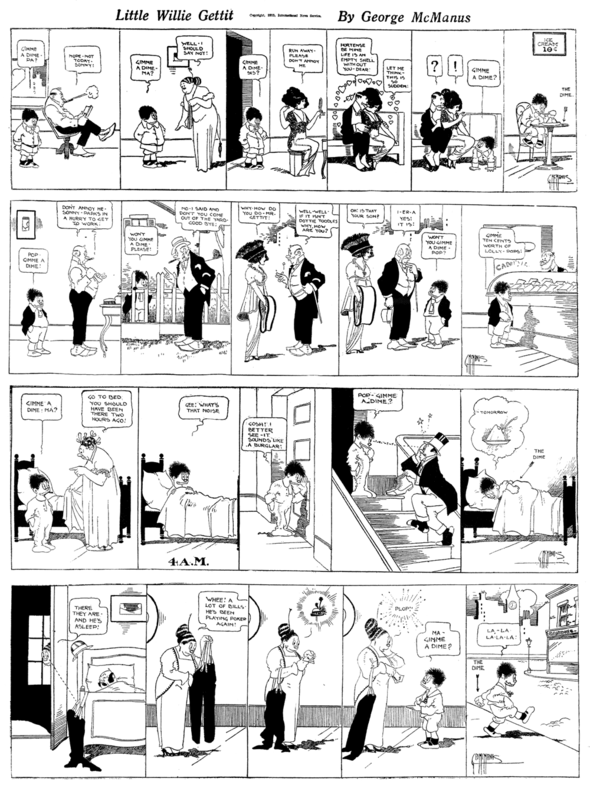 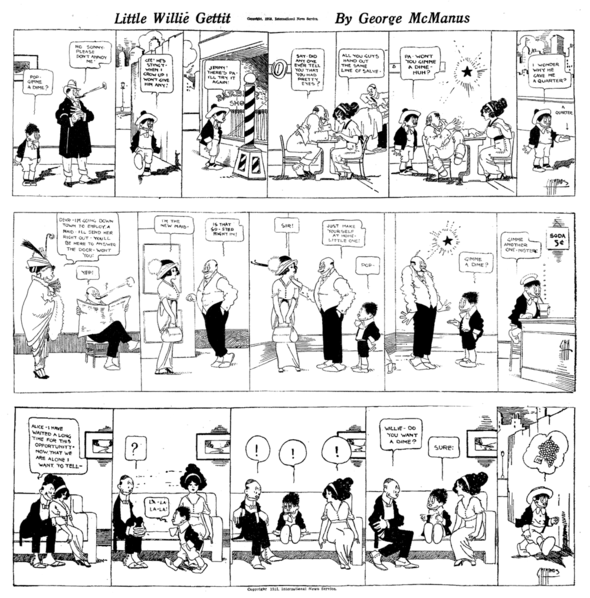 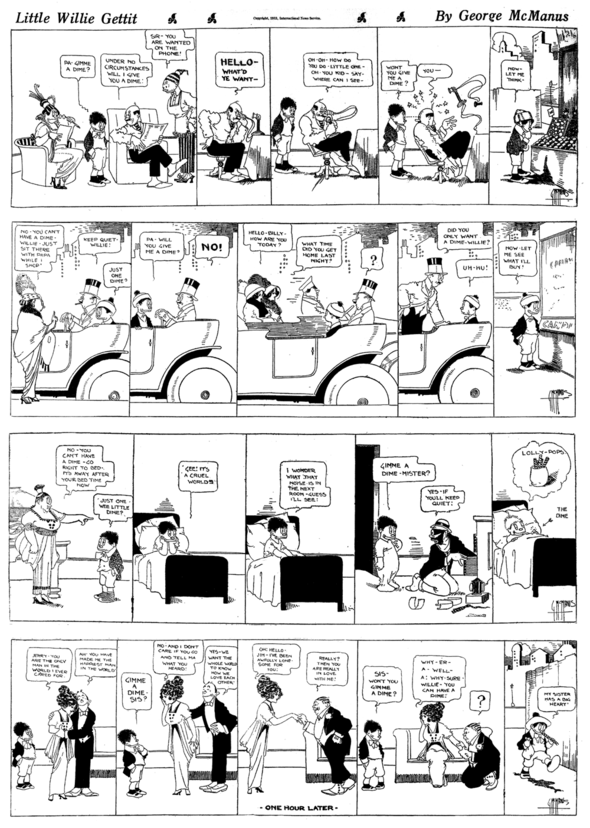 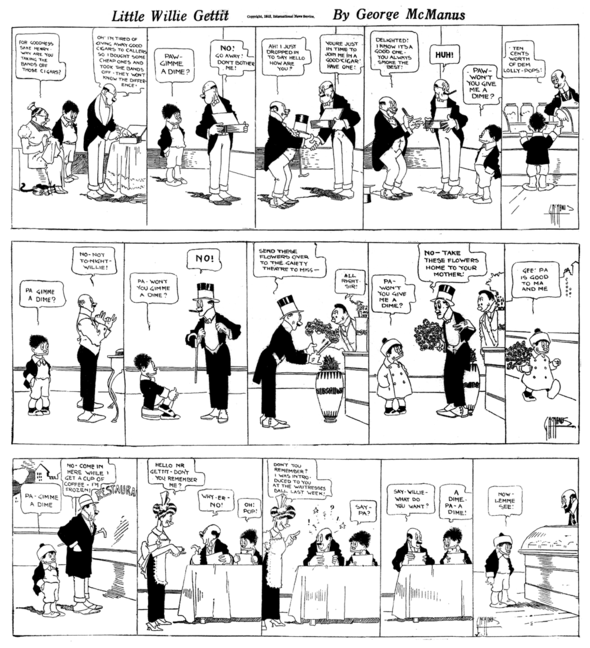 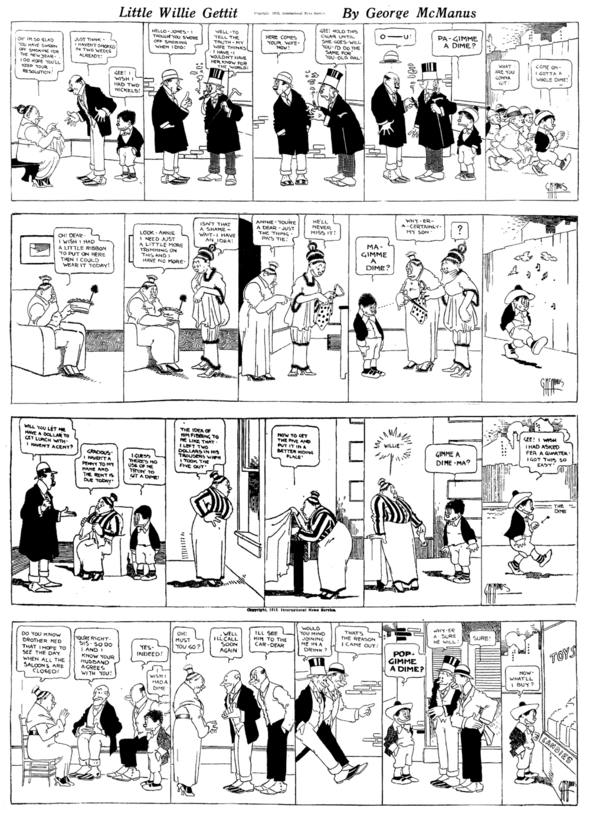 Thanks for your note of approval. We put our hearts into it here in the Kingdom every royal day, and appreciate it when our subjects are pleased.

Bud Blake’s panel, EVER HAPPENED TO YOU?,  was a KFS panel in the 1950’s and 60’s. It was funny and insightful, and really doesn’t deserve the obscurity it now lingers in. He dropped it when he sold TIGER to the syndicate, which took off from the start. Look at my blog post I wrote last year to see more, HERE.