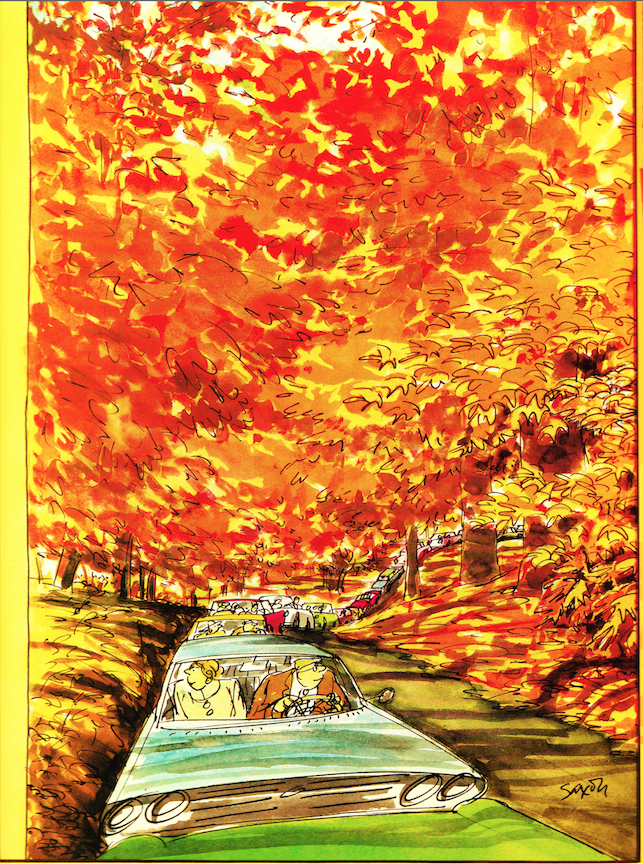 The foliage in New England is past peak, but there are still many colors on display.  It’s the end to what locals call “leaf peeping season” when tourists travel the back roads craning their necks to look up into the branches of the trees overhead.

Chuck Saxon captured this annual ritual in a classic New Yorker cover, which was published on October 7, 1974.

An old friend of my father’s, Chuck lived in New Canaan, Connecticut.  In 1988, I was serving as the curator for an exhibition at the Museum of Cartoon Art entitled “The Artists of The New Yorker.”  I asked Chuck if we could borrow a few pieces for the show and he invited me to stop by his studio.  While flipping through a stack of originals, I came across this leaf peepers cover and told him it was one of my favorites.  He said the piece I was holding was actually a preliminary drawing and pointed out the changes he had made in the final version. He agreed to lend it to the Museum for the exhibition and offered to sell it to me when the show was over.  Unfortunately, he passed away on December 6, 1988 while his work was still on display at the Museum. When the show ended, I returned all of Chuck’s art to his widow, including the leaf peeper piece, and didn’t mention the offer he had made to me.

This piece was also included in a 1984 exhibition at the National Academy of Design entitled Seasons at The New Yorker: Six Decades of Cover Art. The original art for the covers was displayed next to the final printed versions. I have a copy of the catalogue, which is where I found the image above.

We also try to mark the changing seasons in Hi and Lois and autumn is our favorite time of the year.  Here is a fall-themed Sunday page, with leaf peepers, from 2004.

I’m sure many Grateful Dead Heads enjoyed this episode but some readers might not have understood the reference.  That’s the risk you take when you riff on contemporary culture.