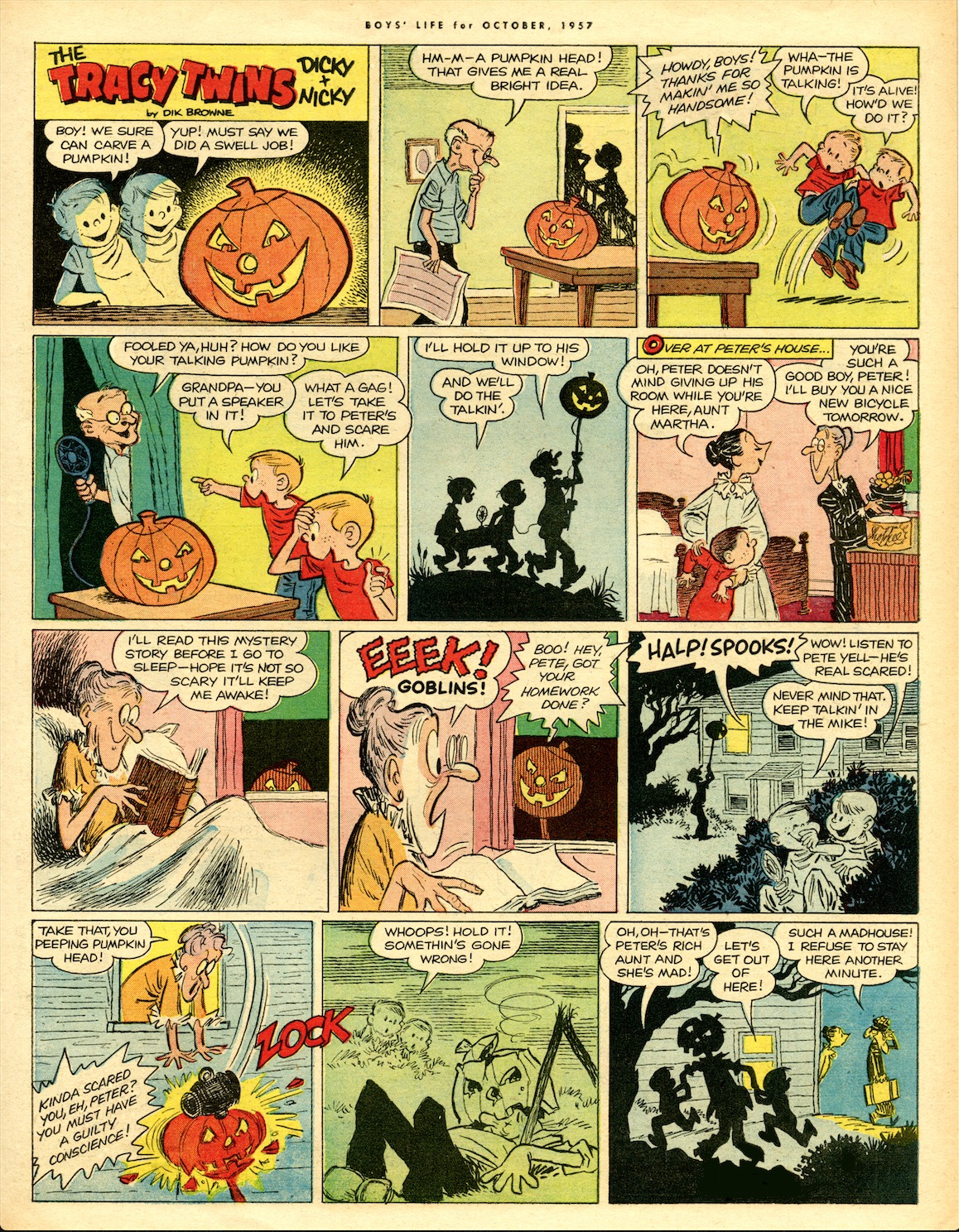 It’s the time of year for carving pumpkins and making mischief, which provides us with an opportunity to reprint another classic Tracy Twins page.  This memorable feature was written by Al Stenzel and illustrated by Dik Browne and made its debut in Boys’ Life magazine in October 1953.

In the January 1954 episode of The Tracy Twins, Dicky and Nicky’s grandfather, an old gent with a bowtie and suspenders who loved telling tall tales about past exploits and long-lost relatives, made his first appearance.  Grandpa became an integral member of the cast along with a set of typical 1950s Baby Boom parents.  Most of the plots revolved around clever schemes, often inspired by Grandpa’s stories, which inevitably backfired.

“I love the relationship between the grandfather and the twins,” Dik’s son Chance remembered in a recent interview. “It skipped a generation.  They were partners in crime.  There’s an innocence in it that seems to be missing today.”

This Tracy Twins page, with a Halloween theme, is a typical example of how one of Grandpa’s “bright ideas” has unintended consequences.

A talented cartoonist in his own right, Chance has a unique perspective on his father’s technique. “He couldn’t do a panel that was not designed. Every one of these panels is a beautiful layout piece, like a course in how to maintain interest box-to-box.  If you back up and see the whole page, it looks terrific throughout.  There’s no drop out, the blacks are spread out evenly and when you get in close you can see all the thought that went into it.  He would draw everything before he put it to paper and pretty much knew what was going to happen with every line before the pen hit the paper.”

“He was using a cinematic technique.  He loved movies,” Chance added. “Some panels are like stills from a Frank Capra movie. He had the technical ability not to fear any kind of camera angle, low or high, and took it on to serve the story, never in a show-off way like ‘look what I can do.’  It all serves the story and the characters in the story.”

Chance stated proudly that, “in terms of the art, I consider my Dad to be one of the wonders of the world.  His style is so many different things.  I don’t know if there is any contemporary cartooning quite like it.  In terms of cartooning that straddles the big foot and little foot, four and five-finger styles, I don’t know if there is anyone else who does it all.  With these pages it’s just cartooning at its best.”