Today we look at another alumnus of The Saturday Evening Post, Ted Key (1912-2008) and his famous cartoon creation, “Hazel,” the cranky housekeeper. 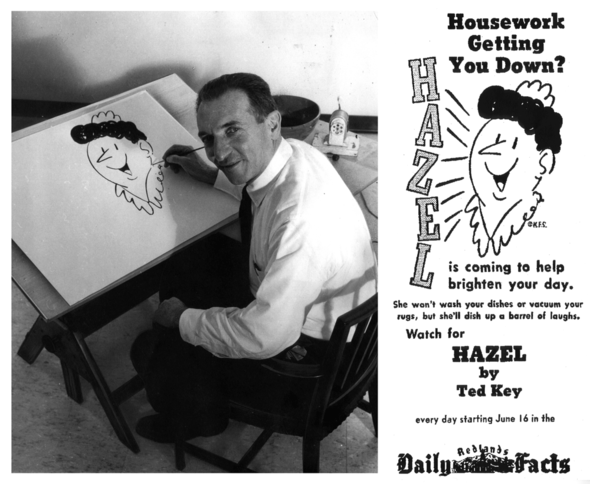 Key was a very creative guy. In addition to cartooning for many popular magazines, he wrote radio plays, children’s books, and Disney movies.

“Hazel” first appeared in the Post in 1943, and was very much admired by readers — enough so that many collections were printed over the years, and it was a regular feature of the Post until closing its’ doors in early 1969. 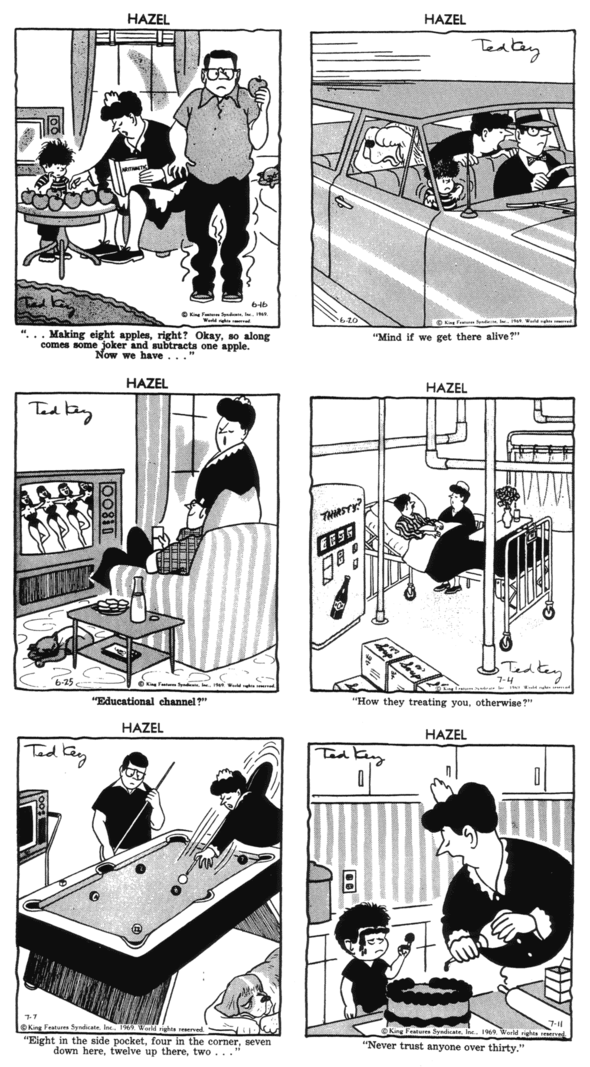 By that time, “Hazel” had already been converted into a hit TV sitcom starring Shirley Booth from 1961 to 1966 while Key’s cartoons were still in demand. Converting it to a syndicated series was the logical choice, with King Features being the ideal outlet. So only three months after the demise of the Saturday Evening Post, “Hazel” was relaunched for the comics page starting on 16 June 1969. Forty five years later, it is still offered by King Features, though the art is recycled, with Key having retired in 1993. 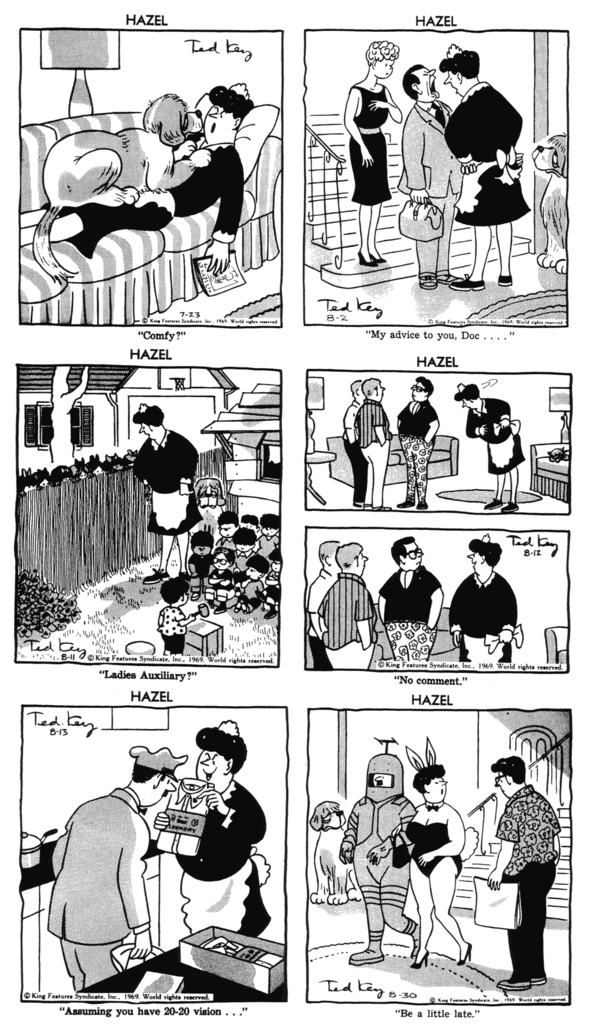 Up until the middle of the 20th century, before the plethora of work-saving appliances now seen in every American home, many households had hired help with the daily chores. But with the electrification of most towns and rural communities came washing machines, refrigerators, dryers and dish washers. This technological progress meant less need for servants, leaving only the wealthy able to keep them. In Hazel, the family she works for, the Baxters, seem like a middle class suburban family, an unlikely place for a uniformed maid, but somehow, they do. 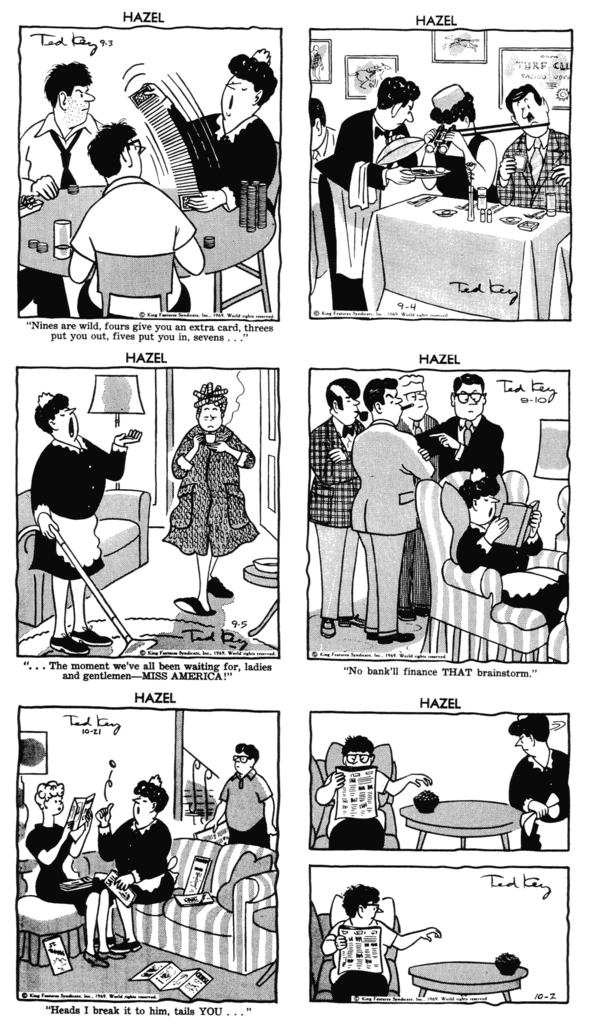 There has always been a comedy theme of domestics being so impossible to get they are allowed to stomp all over the craven householders. This goes way back, enough to say that Hazel is part of this tradition. 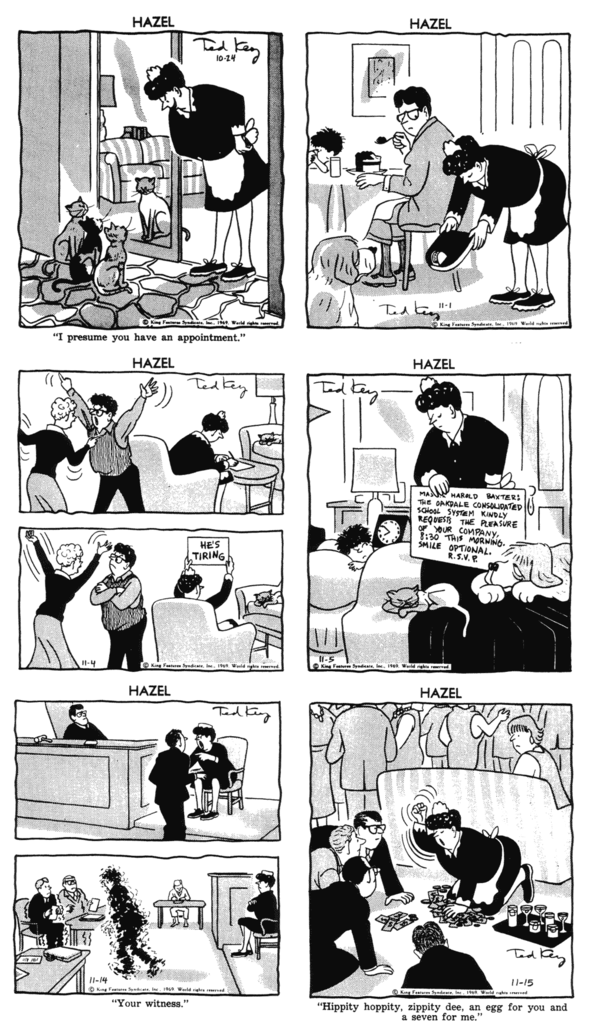 The panel is almost always captioned by a deadpan sarcastic comment. Hazel is overbearing and critical of just about everything she sees – even the animals get snide wisecracks. 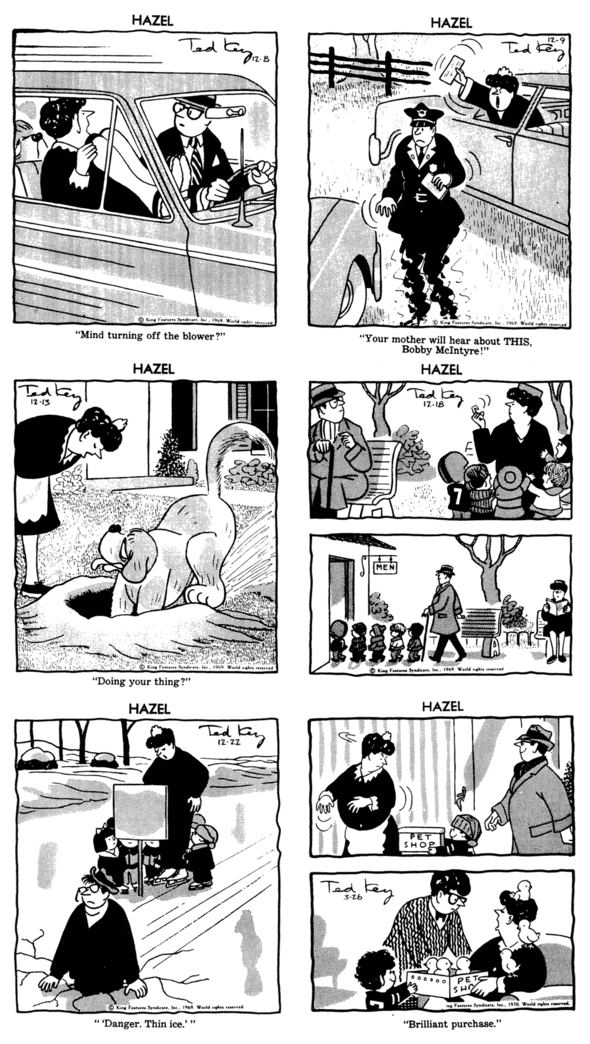 Mr. Baxter in the TV series was a well-heeled lawyer, but in the cartoon he doesn’t seem to have a particular job, but he is a seen as being unable to read instructions or even dress properly. 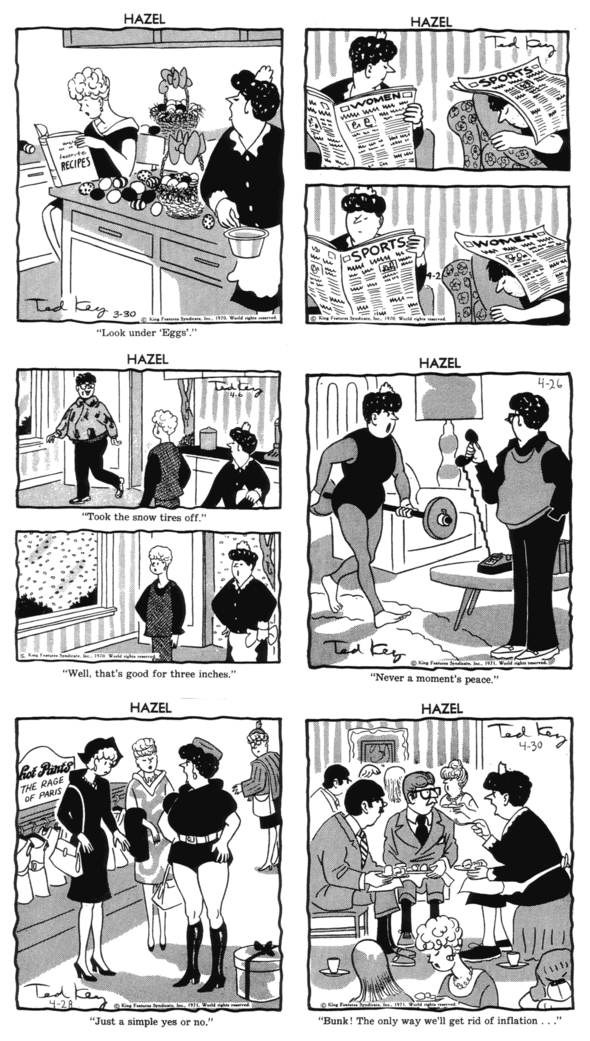 Thanks, Whoop- Nice to have you check in again.

Glad you liked OFFICE HOURS.  The panel seems to have sold well enough over it’s fifteen year life span, but we didn’t see it as important enough to replace Olsen and keep it going.

You mean “Mad Men” is just like OFFICE HOURS, don’t you? The corporate world of postwar America was seen as an exciting environment, an expression of our dynamic economy and international business superiority enough to inspire many stories about the lives of that world’s occupants.

There were serious examinations of it in bestselling books like The Organization Man, The Man in the Grey Flannel Suit, and The Pyramid Climbers. The dark side of the office culture was seen in Rod Serling’s famed Patterns, a TV play that later became a film.

These and more lighthearted productions like the films The Apartment or How to Succeed in Business Without Really Trying all defined the modern white collar world in popular culture. “Mad Men” is an echo of that once-potent perception.