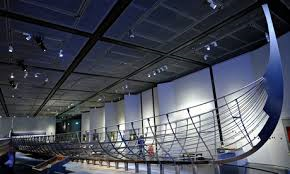 The first major exhibition on Vikings at the British Museum in more than 30 years recently came to a close. The exhibit, “Vikings: Life and Legend,” featured many new archaeological discoveries and objects never seen before in the UK alongside important Viking Age artifacts from the British Museum’s own collection and elsewhere in Britain and Ireland.

At the center of the exhibition was the surviving timbers of a Viking warship that measured 121 feet or 37 meters, the longest ever found and never seen before in the UK. The ship, known as Roskilde 6, was excavated from the banks of Roskilde fjord in Denmark during the course of work undertaken to develop the Roskilde Viking Ship Museum in 1997. Since the excavation, the timbers have been painstakingly conserved and analyzed by the National Museum of Denmark. The surviving timbers – approximately 20 percent of the original ship – have now been re-assembled for display in a specially made stainless steel frame that reconstructs the full size and shape of the original ship.

The construction of the ship has been dated to around AD 1025, the high point of the Viking Age when England, Denmark, Norway and possibly parts of Sweden were united under the rule of Cnut the Great. The size of the ship and the amount of resources required to build it suggest that it was almost certainly a royal warship, possibly connected with the wars fought by Cnut to assert his authority over this short-lived North Sea Empire.

For more information about this incredible exhibit, click here.