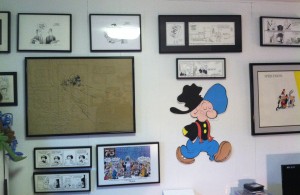 A portion of one wall in my studio.

In previous posts, I have shown you photos of different items in my studio.  This is a portion of a wall in my studio which is just to my left when I am at my drawing table.  It is filled with cartoon art by lots of talented friends of mine and provides me with inspiration daily.

Starting at the upper left of the photo: two original editorial cartoons by cartoonist Jeff Stahler; an original Rhymes With Orange Sunday comic strip by Hilary Price; two original daily comic strips of The Buckets by Greg Cravens; below that is a Mel Blanc print my wife gave me for our first anniversary many years ago; to the left of that is an original Lola daily comic strip by Todd Clark and a large Snuffy Smith character drawing by me enlarged on hard plastic material; beside that is a beautiful print of Snuffy Smith on brown grocery bag-type paper by my friend and mentor, the late Fred Lasswell; to the left of that is a caricature the incredible cartoonist, Roy Doty drew of me on a napkin when we had dinner together; below that is an original Nancy daily comic strip by Guy Gilchrist; and an original Beetle Bailey comic strip by Mort and Greg Walker; and next to that is a print of the Blondie 75th Anniversary Sunday Strip I received from Dean Young for participating in the Blondie anniversary storyline.  There is certainly a lot of inspiration in that section alone!  If this wall could talk, it would definitely make you laugh!

I will show other portions of my studio walls with comic art another time.  Keep readin’!