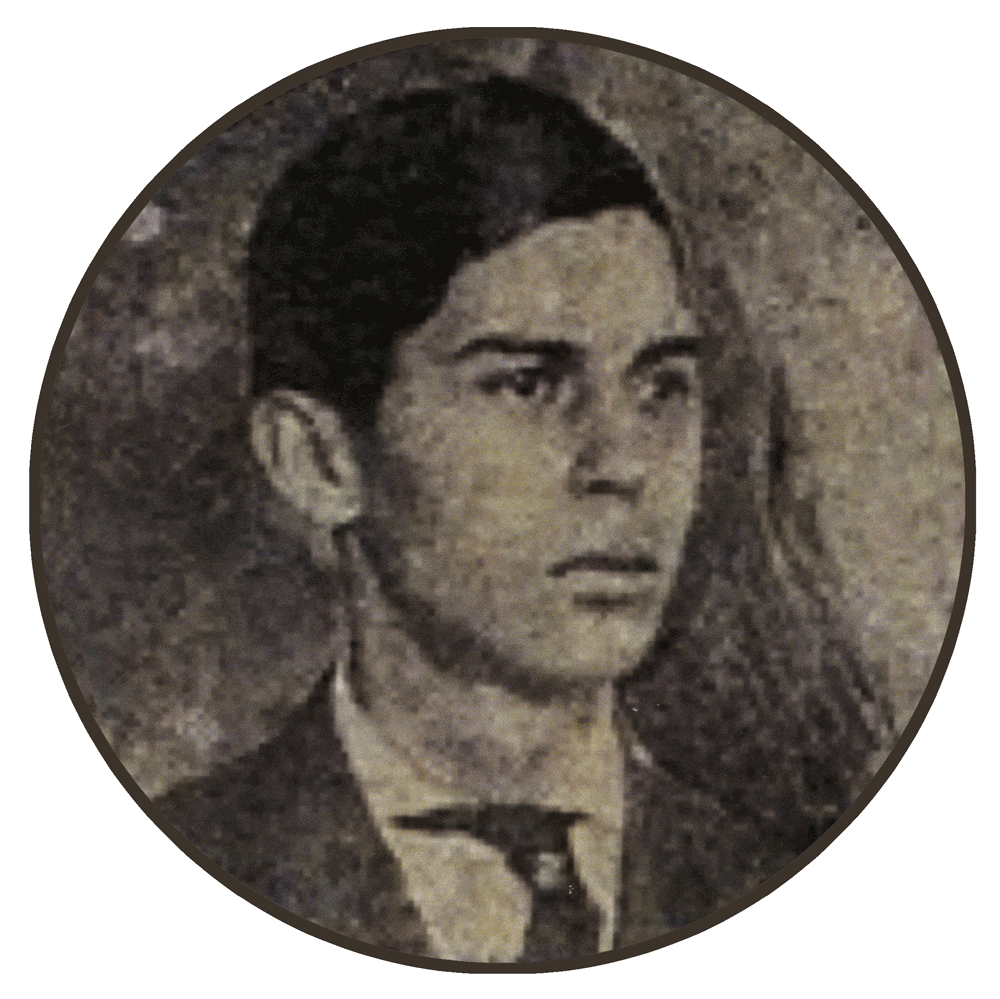 Today, I’m going to take you on a long journey, of over a hundred years, to see some examples of a little remembered cartoonist of that era, Charles H. (“Duke) Wellington. 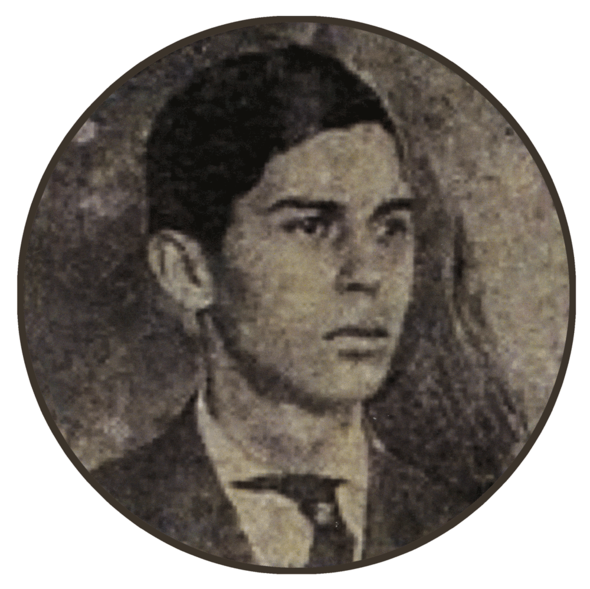 Mr. Wellington was born in St. Louis, and started his career with several newspapers there, but got his nationally syndicated start with the World Color Printing Company’s syndicate in 1905. He began his Hearst years in 1908 when he joined the cartooning staff of the New York Evening Journal. He did daily strips, or more accurately, weekday strips, alongside such early greats as Tom Dorgan, George Herriman and Gus Mager.  At that point, even the size of the strips could fluctuate from one installment to another. The Journal’s comics saw some syndication, but in those pre-King Features days, they mostly stayed in the pages of the Hearst chain. 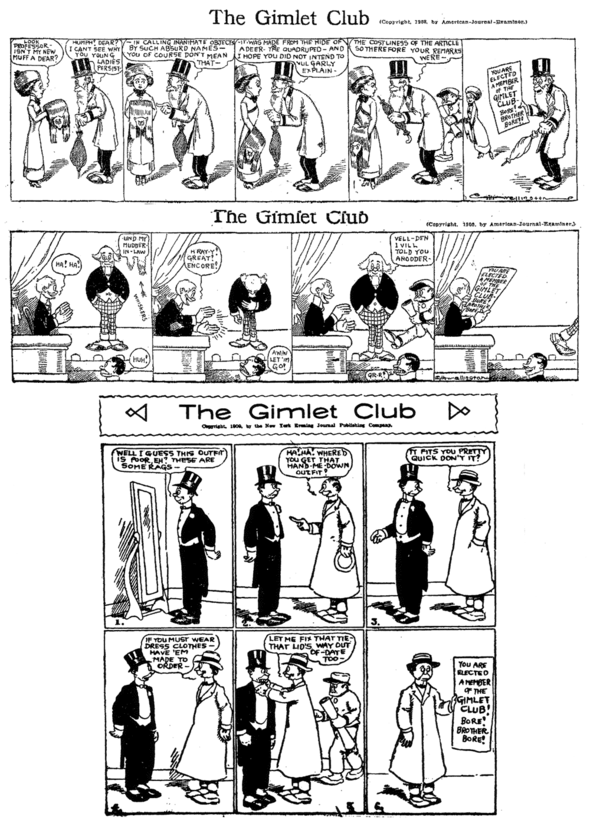 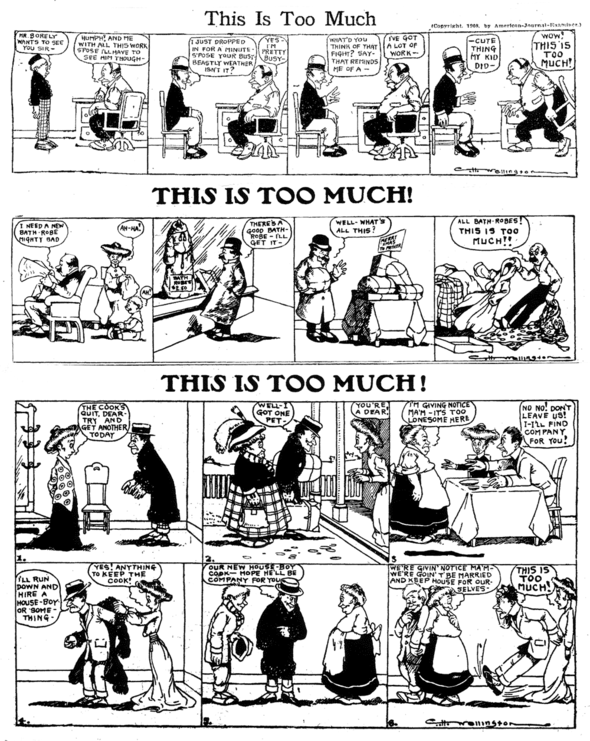 Back then, weekday series were just as often about a theme as set characters. Wellington was pretty good at turning out different series on one gag or catchphrase in the 1908-11 years,  among them, THERE’S A REASON, WHY IS IT?, FOR HE’S A JOLLY GOOD FELLOW, et cetra. 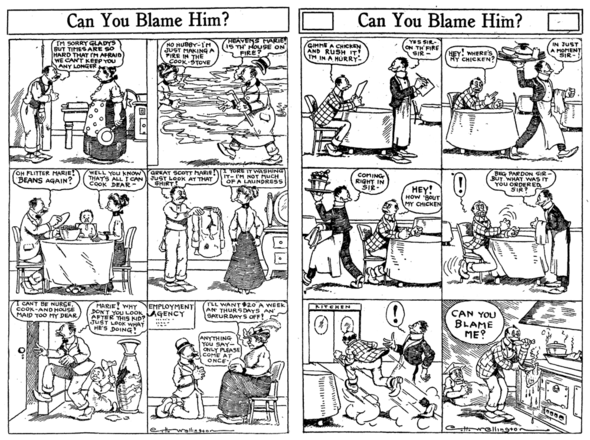 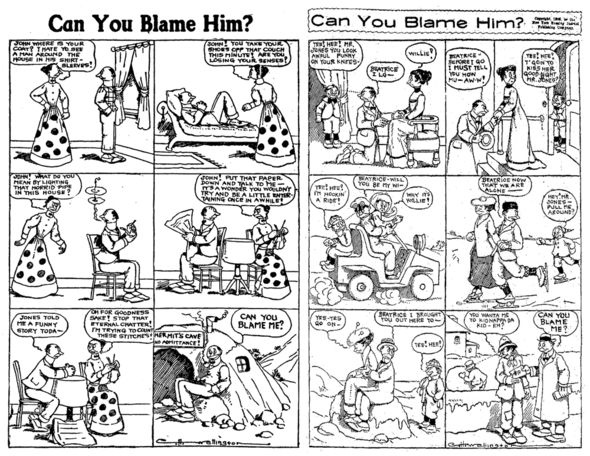 Some of the characters that did appear were: Louie, a dim-witted German storekeep; Rastus, an overeager Black office boy; and Schnoodles, another German, this time a short, lovesick suitor of a girl who had no use for him. It would seem Wellington liked dialect humor, seeing that his most successful creation was Cedric, of Pa’s Son-In-Law, who had a posh, upper class British patois. 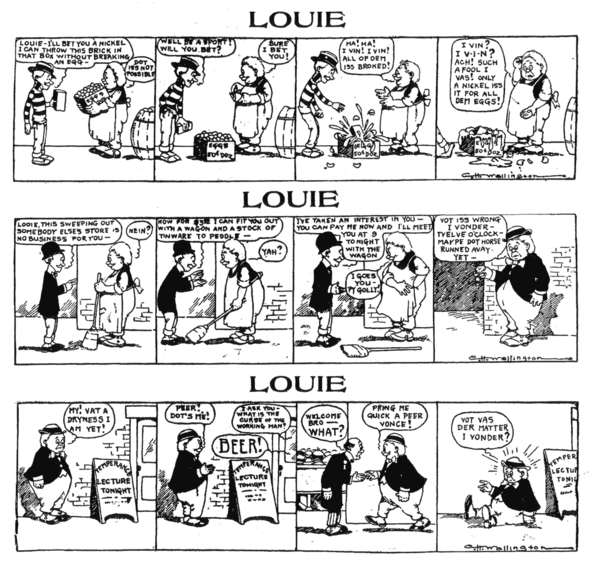 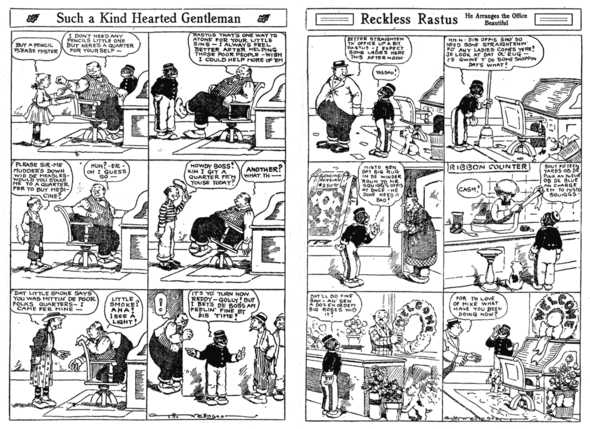 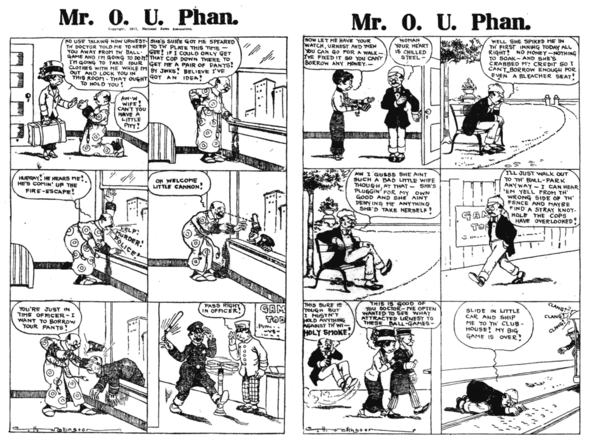 The strangest title was PSYCHO AND SAP, which showed two tramps: a tall smart one and a shorter, fat, dumber one.

Along the road one day in 1910, “Psycho” finds a book on hypnotism, and he instantly became a spellbinding marvel, usually making poor Sap do work or steal for him. 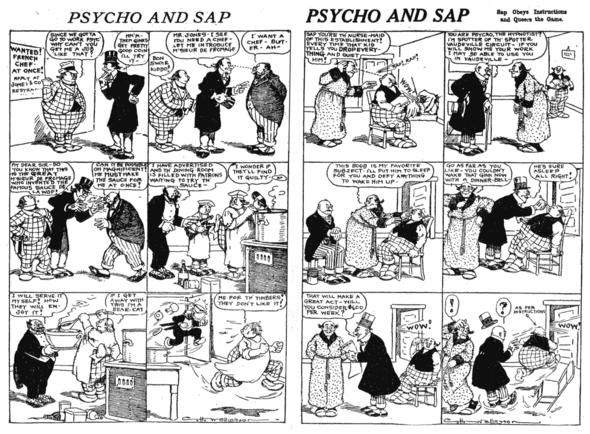 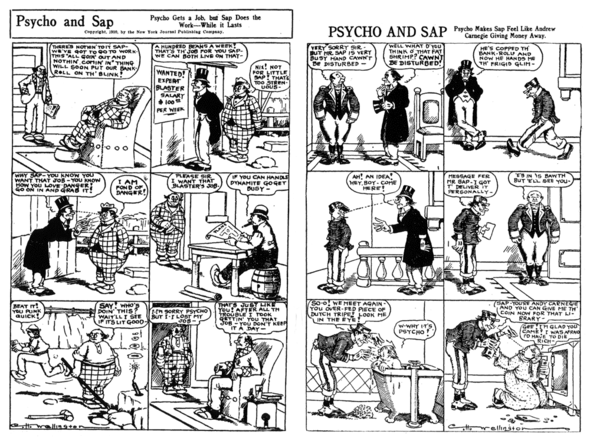 Being a “Sap” has always meant the same thing — somebody thickheaded and slow, but I will assume the term “Psycho” did not mean crazy in 1910, perhaps some kind of genius instead.

Psycho resembles an earlier strip character, a McClure syndicate star of about 1903 by Ed Carey called “Professor Hypnotiser,” who also abused the dark arts of  mesmerism, though the top hat, unkempt hair and Chesterfield coat were generally established as marking the character as an actor, so Wellington might have thought some vaudeville stories might have been possible later, despite the loss of a contract in the above sample. 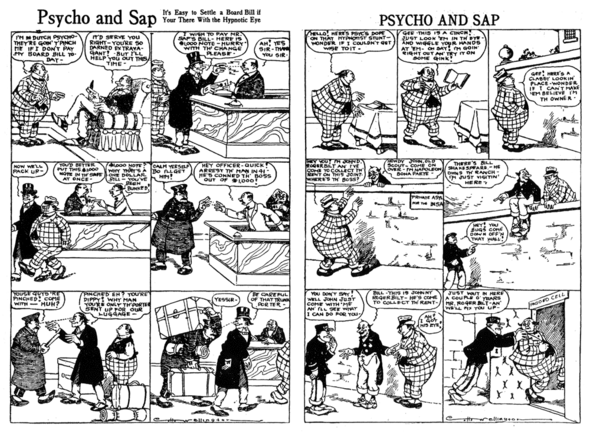 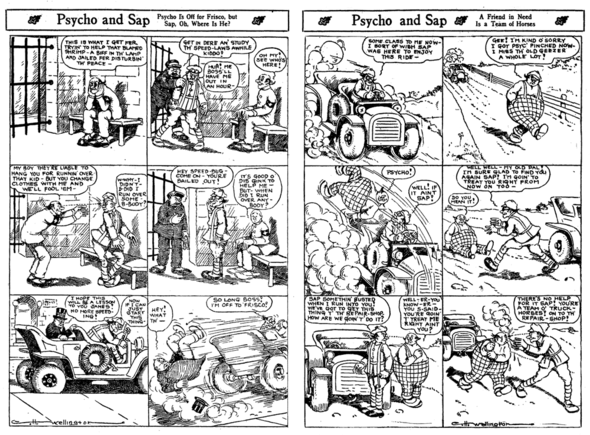 I’ll be back after Labor Day, as next week we’ll have a special entry by the winner of this year’s Jay Kennedy Memorial Scholarship Award, and I want you all to see it.

Until then, Au revoir.

P.S. Below are my responses to last week’s comments …

Timothy Fisher,
We did run some samples of each strip last time … it wouldn’t have been fair otherwise. It would seem though, that really obscure ones are obscure for a reason, and most will want to go with well known titles.

D.D. DEGG,
Sorry- we have nothing on Mr. Camp (Campagna) outside of his “Bringing Up Father” work.  I don’t know that he was a name cartoonist doing editorials or sports art. I think he was just a bullpen guy, doing ghost work. I know he did a lot of comic books before he joined BUF as a name cartoonist.

David, Cephasatl, and Danidarc,
I also enjoyed “Professor Phumble” when I was a kid, and it was a pleasure to meet Bill Yates years later. He told me that in the late 1960’s, during the “college” period of the strip, he was inundated with requests for original art, but I was among the few that by then (the 1990’s) that still remembered the series well enough to ask questions about the characters.