Ask A Cartoonist: Surrounded By Friends

We all have friends in our lives who constantly say and do things that would make great fodder for comics.  Mine is my dad– he’s a big fan of Richard Nixon and Hannibal Lecter, and his favorite food is mint chocolate chip ice cream with butterscotch sauce.  He’s one of those people who almost always has a quip on the tip of his tongue.  I’ve probably drawn more comics based on my dad than on anyone else in my life!  But certainly basing cartoons on people I know is one of my favorite things to do.

I asked our cartoonists to tell us about characters and cartoons based on their families and friends this week.

My friend Jon Buller (the author -illustrator, with his wife Susan Schade, of over 50 kid’s books) built a one-person “mobile home” sometime in the 70s. He takes it out once in a while to admire it, though it hasn’t logged very many miles. In this strip, Zippy is channeling Buller as he imagines a road trip to Utah—then sits down on the job.

Dennis and family (and the Wilsons) feeding the Homeless at Christmas, inspired by our Men’s group at church who reach out and share friendship with those who don’t have a Christmas meal at home. 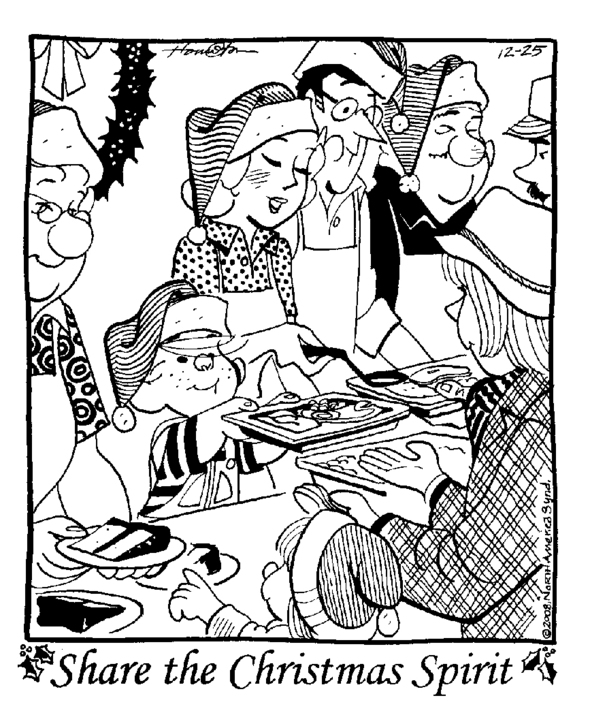 All of my characters are based on real people

Beetle Bailey is my old high school buddy, David Hornaday. I went to pick him up one morning and his mother said he was still in bed. I said, “But we have a golf tournament and we tee off at 9:30.” She said, “Go wake him up.” He was asleep in his cot and I shook him. He rolled over with his back to me and grabbed his pillow and went back to sleep. I turned his cot over and he fell to the floor, grabbed his pillow and went on sleeping.

I shook my head and said, “David you ought to be in a comic strip.”

Killer Diller was a roommate I had in the Army who would never go anywhere with me. All he wanted was girls to have sex with him. I asked him how he found them and he said, “I just walk down the street and say to every girl who passes ‘wanna have sex?'” I said, “Don’t you ever get slapped?” He said, “Yeah, but one out of ten says ‘Yes.'”

Plato was patterned after my partner, Dik Browne, who had a terrific intellect and a great sense of humor. He loved to play tricks on people but every time I played a trick on HIM he’d get mad.

Sgt. Snorkel was a Sergeant I had named Octavius Savou who yelled at us and ordered us around till we hid from him in fear. But one day near Christmas we came to our room and found a holiday poem on our pillows addressed to “My Boys.” We couldn’t believe that he had an ounce of good feeling toward us and we began to look at him differently. So that’s how I patterned Sarge, “Tough but a good side under it all.”

Longtime readers of Safe Havens will recall that Samantha and her friends came together as the Havens Middle School’s “Other Clique.” On the first day of class all students had to register as belonging to a specific clique, and they were the ones who checked the “Other” box since they didn’t fit in anywhere else. Remove the bureaucratic paperwork, and that’s pretty much how my school cohort came together.

This one was inspired by friends in my book group, some of whom are using e-readers, and some who don’t. But they are all book worms:

It’s often said that dog is man’s best friend.  So, many years ago I decided to give Jughaid’s girlfriend, Mary Beth, a dog.  I modeled the dog character off our family’s pet dog of 17 years, a Chihuahua mix we rescued from the pound, named Biscuit.  I even gave the character the same name!  Biscuit shows up in the strip from time to time.