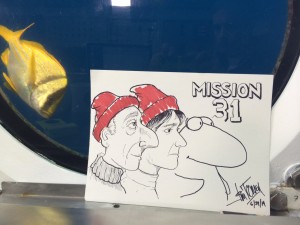 On June 29, 2014, Jim Toomey had the honor and privilege of participating in Fabien Cousteau’s groundbreaking ocean exploration, Mission 31. The ambitious 30-day living experiment in the Red Sea succeeded as the first effort in saturation diving, proving that it could be done without suffering any ill effects. Jim Toomey visited the Aquarius lab and was able to witness firsthand what the ocean explorers at the helm of this ambitious expedition were setting out to accomplish.

The diving experiment coincided with the 50th anniversary of a monumental legacy left by his grandfather Jacques-Yves Cousteau, who is credited with creating the first ocean floor habitats for humans and leading a team of ocean explorers on the first attempt to live and work underwater aboard Conshelf Two. Mission 31 broadened the original Cousteau experiment by one full day, 30 more feet of saturation and broadcasted each moment on multiple channels exposing the world to the adventure, risk and mystique of what lies beneath.

This was the first time a mission of this length took place in the Aquarius lab, the only underwater marine habitat and lab in the world, located 9 miles off the coast of Key Largo, Fla., and operated by Florida International University. 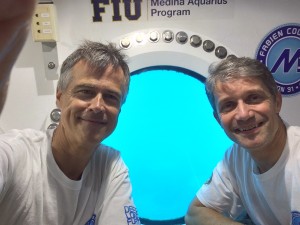 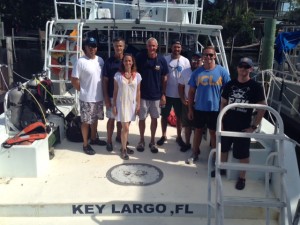 On the way out to the Aquarius Reef Base for Mission 31 with Céline Cousteau, Fabien’s sister.

It’s been an incredible summer of amazing diving expeditions and ocean exploration. More to share soon!