Ask the Archivist: Flash On The Screen 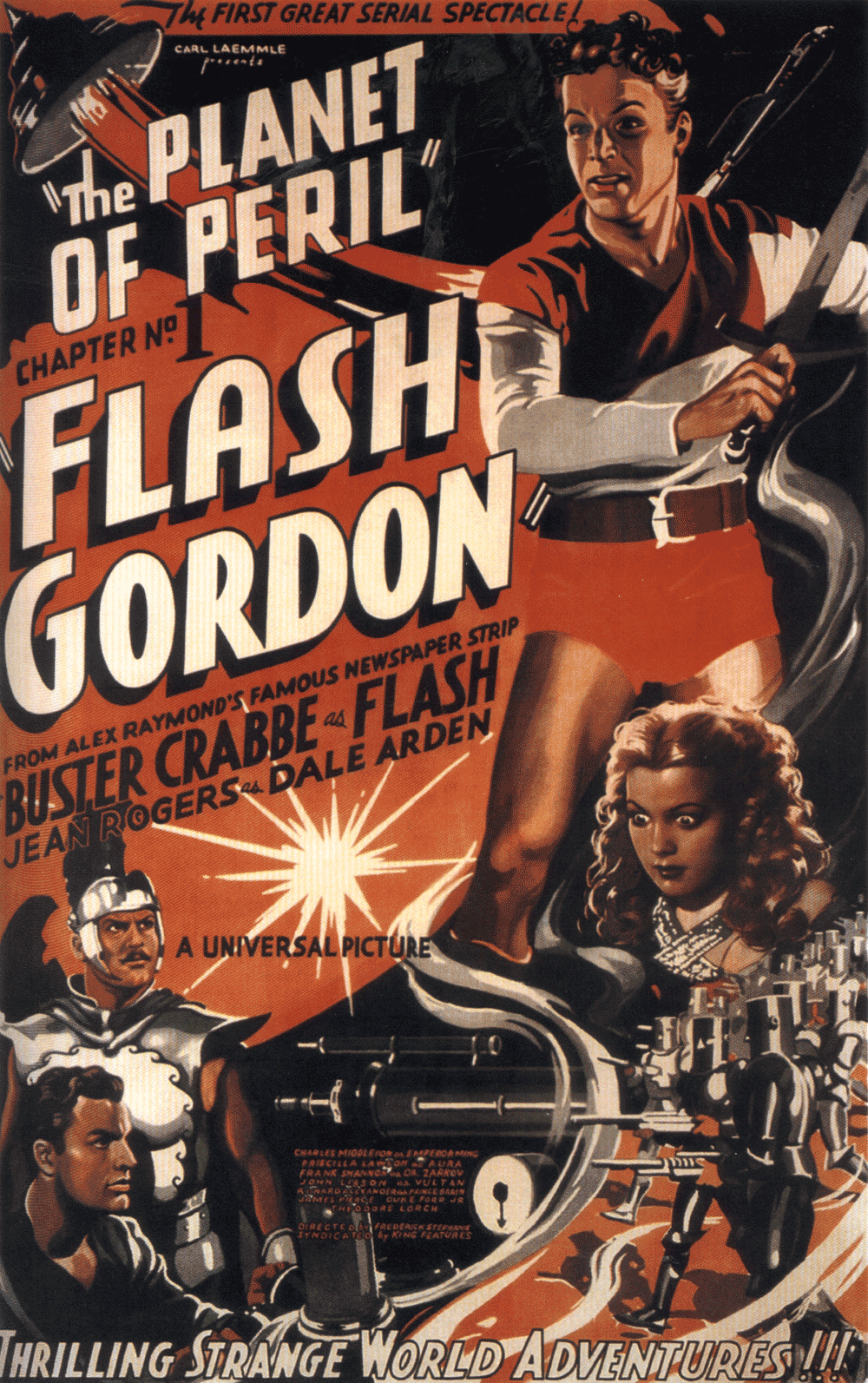 Since “Flash Gordon” is celebrating 80 years in 2014, we should recall that Flash had huge success on film during the Golden Age of Hollywood too.

The success of the strip naturally inspired licensing opportunities and not just toys or books, but an media corporation like Hearst put radio and movies to use too.

In 1936, Hearst’s Cosmopolitan Productions was associated with Warner Brothers, a studio not known for what we now would call “Science Fiction.” It also didn’t make serials, which would be the  ideal presentation for Flash.

Serials, a multi-chapter story that the viewer was expected to return weekly during the run of the story, had been a mainstay of movie going in the World War One era, and Hearst had even produced a few. But as the movie industry progressed, serials became Saturday morning kid fare, made by low budget outfits like Mascot and Republic.

At least one adventure comic strip had been serialized before, Bell Syndicate’s “Tailspin Tommy” had two well-received series in 1934 and 1935. They were done at Universal Studios, the only A-picture company still involved in serial production. So we turned to them, all involved looking to make a prestige series based on the smash Sunday comic. 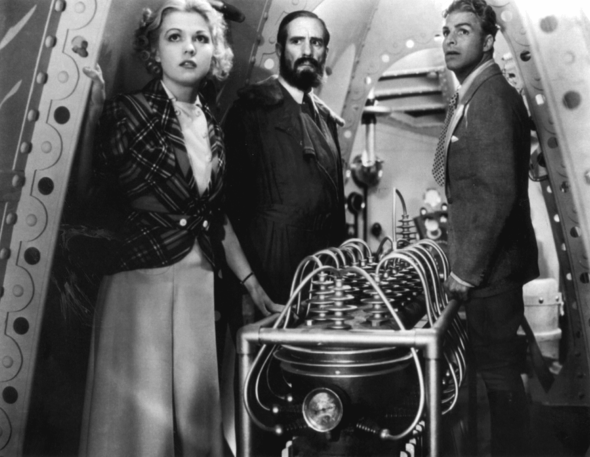 LEFT TO RIGHT: JEAN ROGERS AS DALE, FRANK SHANNON AS ZARKOV AND BUSTER CRABBE AS FLASH IN AN EARLY SCENE BEFORE THEY PUT ON SPACE CLOTHES IN “PLANET OF PERIL”, CHAPTER ONE OF “FLASH GORDON” (1936).

It went into production with handsome young, one-time Olympic swimming star Buster Crabbe in the lead (They had to dye his hair because it wasn’t really blonde.) His costars were Jean Rogers as Dale Arden, Frank Shannon as Zarkov and wonderfully hammy Charles Middleton as Ming the Merciless.

It was a very expensive undertaking, as they had few special effects then, and lots of strange props and costumes had to be made to try and match the scenes Raymond had drawn in the strip’s first year. Unusually for Hollywood, they actually tried to follow the story. 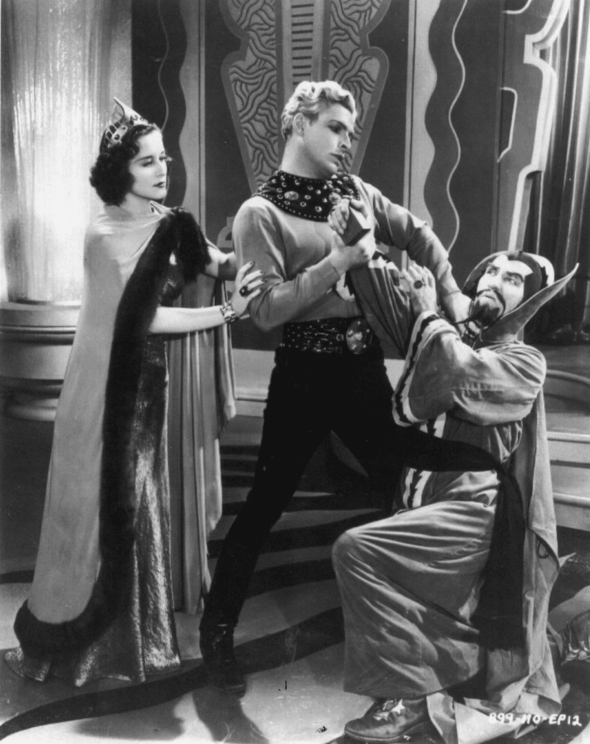 The result was probably the most popular serials ever made, or as promotional copy proclaimed, “The First Great Serial Spectacle!”  Two further ones followed,  “FLASH GORDON’S TRIP TO MARS” (1938), which added a comic relief reporter named Happy Hapgood into the story that was not in any Raymond story, and third and last, “FLASH GORDON CONQUERS THE UNIVERSE” (1940) with a new Dale Arden, Carol Hughes.

THE FIRST ONE-SHEET TO THE FIRST CHAPTER.

I won’t go into the stories here. By the many fan sites, it proves these are still very popular films. Actually, they seem to have never been out of circulation.  I can’t say why a fourth venture didn’t come about. It would seem to have nothing but fame and fortune associated with it. Crabbe even got to play rival space man, Buck Rogers, in another still popular Universal serial in 1939. I’m sure that with the coming of war and the closing off of European and Asian markets may have had something to do with it. 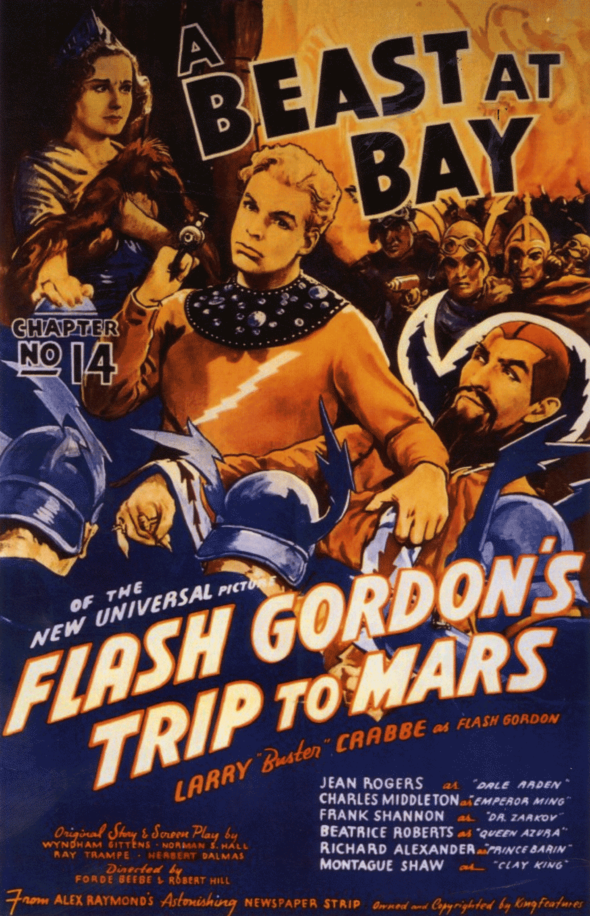 A POSTER FROM THE SECOND SERIAL.

When World War Two ended, the world of serials was a quickly shrinking one. Though Universal had produced several other King Features titles, like Secret Agent X-9 and Tim Tyler’s Luck, they stopped all production in 1946, when with a merger, the studio became Universal-International, and new management discontinued all short film productions.

However, Flash’s serials had returned to  theatres here during the war through Universal’s “Realart” rerun brand, and again after the merger. In 1950, it was decided that short double bill  features could be made of heavily edited down chapters, and soon Flash Gordon became “Rocket Ship” and Flash Gordon’s trip to Mars became “Mars Attacks The World.” The third series wasn’t touched. These feature versions would be  the first time many foreign markets were seeing Flash. Much of Europe, so recently freed from Nazi tyranny, and now confronting a  Communist one, may not have liked the 1940 series, where Ming wears a modern  military uniform, he’s called “Dictator” a lot, and his adversary, Queen Fria of “Frigia,” is reminiscent of the proud but helpless royalty of northern Europe.

The next stop for the Flash serials had to be television, yet these films were held back. When a new series was mounted just for video, the strangest, worst way possible was taken.

In broken, struggling  postwar Europe, a lot of actors and film studios worked dirt cheap. Many inexpensive series were made for American television syndication, with now long forgotten shows like Foreign Intrigue, Orient Express, Overseas Press Club, etc. filled time on 1950’s U.S. screens. “Intercontinental Film Productions” made a Flash series of 31 episodes in West Germany, starring barely known American actor Steve Holland. Steve was a terrible Brando wanna-be, with a permanent “method acting” snarl. Every line is hissed out like a cobra. The props would seem to be reused from a grade school play. It’s really desperate and was not unexpectedly a lemon in syndication.

It might have helped if they could have had Crabbe reprise his role, but at the time he was starring in another cheap series, Captain Gallant of the Foreign Legion, produced by the French in Morocco.

FLASH IS SHOWN IN EUROPE FOR THE FIRST TIME IN 1950. NOTICE HOW CRUDE THE BELGIAN POSTER (TOP) IS, WITH THE MONSTER THAT NEVER APPEARS AND WHAT LOOKS LIKE BRICK BRADFORD’S TIME TOP SPINNING IN THE SKY, CONTRASTED WITH THE SUBTLETY OF THE TWO SWEDISH POSTERS, WHERE HE’S KNOWN AS” BLIXT GORDON”.

The classic serials weren’t yet on television. It would seem that the original theatrical exhibition rights had to expire before King Features and video rights could take over. In 1966, a wave of nostalgia for the Depression Era gripped the country. Nobody liked to look back fondly on breadlines or the dustbowl, but we all reveled in the heritage of our popular culture. Old stars were still working and still celebrities, we still knew the long dead ones because of TV’s endless recycling of old films. This was the moment KFS put the Flash series on TV. We cut off the opening and closing credits and replaced them with our new ones, changing the names of the stories along the way to Flash Gordon Space Soldiers, Flash Gordon Space Soldiers’ trip To Mars, and Flash Gordon Space Soldiers Conquer The Universe. In addition, another set of whittled-down features were made available too, seeing how, though useful at the dawn of television, few TV stations were still running serials then. The yet, newer new titles were Space Ship To The Unknown, The Deadly Ray from Mars, and, as if to make up for the third serial’s being left out before, two features were made of it now: The Purple Death From Outer Spaceand Peril From Planet Mongo. 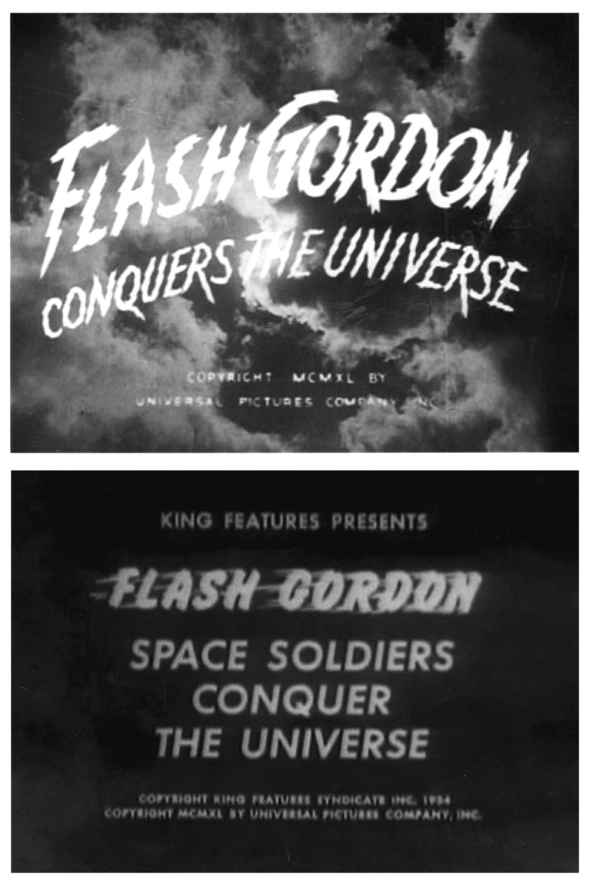 THE OPENING TITLE TO TWO VERSIONS OF THE 1940 SERIES.

They were on television for many years after that, and now are very easy to get on discs, so if you haven’t seen them, take a look. They’re a lot of fun!

Moving on to last week’s comments from readers:

The Katzies are still with us, though going from being the No. 1 strip, inspiring lots of toys, stage shows, animated cartoons and lots of imitations to now being in a few newspapers. Later this year, it will be 100 years since the Kids’ had their greatest cartoonist, H.H. Knerr, work on it.

We had done an “Office Hours” entry once before, maybe we can do another.

For those readers in the U.S., have  a safe Independence Day.