Twenty Three Scientists and A Cartoonist 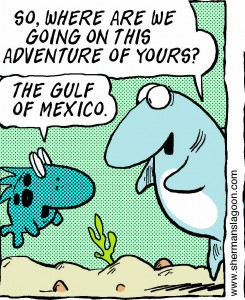 This Friday, June 5, 2014, the NOAA research vessel (R/V) Atlantis will depart Gulfport, Miss., with 23 scientists and myself onboard, bound for a deep sea expedition in the Gulf of Mexico for 10 days.

I have been chosen as the “artist in residence” on the DSV Alvin, a U.S. Navy deep submersible vehicle.  Alvin has a storied history, being used by the Navy to recover Cold War era Soviet subs and nuclear weapons, as well as being used by Nat Geo Explorer Bob Ballard to take some of the first photos of Titanic.

I was invited to participate by Duke University Marine Lab, of which I am an alum, by director, Cindy Van Dover.  There are three teams on the NOAA ship Atlantis.  Twenty four people total, all waiting their turn to dive on the 3-person Alvin.  I will be part of the Duke team, and Cindy, who is also a certified Alvin pilot, is in charge.

Only three people are able to go down on the sub at a time, so it’s a very coveted opportunity.  We will be descending over two miles deep into the Florida Escarpment.  The voyage is concurrent with World Oceans Day on June 8, and I will be doing a live video feed to the Smithsonian’s Sant Ocean Hall that day, to an audience of hundreds there at the Hall.

The purpose of the expedition is to explore several pre-designated points along the West Florida Escarpment, a part of the Gulf of Mexico that sinks to depths of over 3200 meters. Using the deep submergence vehicle (DSV) Alvin, and the autonomous underwater vehicle (AUV) Sentry, scientists will be examining the sea floor along the Escarpment for hydrothermal vents that harbor animals such as tubeworms, mussels and clams. These animal communities are remarkable because they live in an environment of extreme pressure, low temperature, scant nutrients, and no sunlight.  The scientific team will also be on the lookout for cold seeps, whale falls (whale carcasses around which deep sea animal communities form), natural petroleum seeps, shipwrecks, the environmental effects of oilrigs, and more.

The current “Sherman’s Lagoon” series is inspired by this expedition. More to come, so stay tuned!