Last week, we looked at a series about Hollywood and movie stars. Now, we will see one about Washington and political stars. Twenty years ago, there was one strip around that was also considered editorial commentary — Universal Press’ Doonesbury.

With its’ affinity for left-wing positions, It was the first mainstream strip that might have been usually relegated to the underground or college press. However, as it got on in years, it lost its’ ability to stay as controversial as it had been.

In 1994, a fresh competitor in this slim genre took the field with the opposite viewpoint, Mallard Fillmore by Bruce Tinsley.  Mallard features the saga of a conservative duck that toils in the modern American news media, which ideologically pits him against his colleagues and newsmakers on a daily basis. 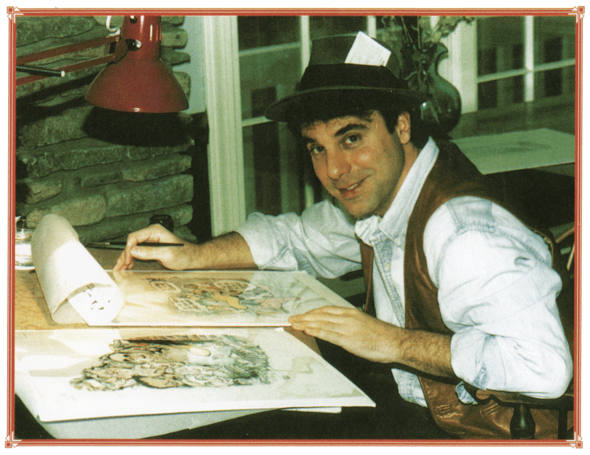 When the strip was being developed, your Archivist had suggested to late King Features editor Jay Kennedy that maybe a talking duck might not be a likable character. I recalled a memorably bad strip that Marvel put out called Howard The Duck in the late 1970s. But, Jay countered that Donald Duck did rather well, and so would Mallard. And … he was right. 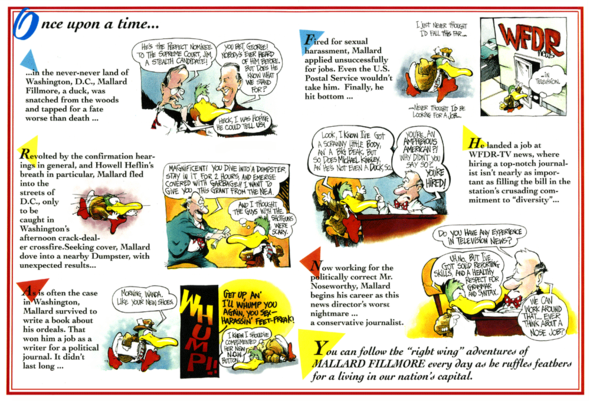 Mallard first waddled on the scene on 6 June 1994, attracting many conservative papers, and some liberal ones, too. Just as Doonesbury had been, Mallard was often set apart from the comics, landing on the editorial page — sometimes even joining Doonesbury there.

I’ll leave you with some samples from Mallard Fillmore’s first year. Maybe, you’ll laugh at Mallard’s pithy observations about liberal orthodoxies and some of the personalities and events dominant then. Maybe, not so funny is how some of these issues have yet to go away. 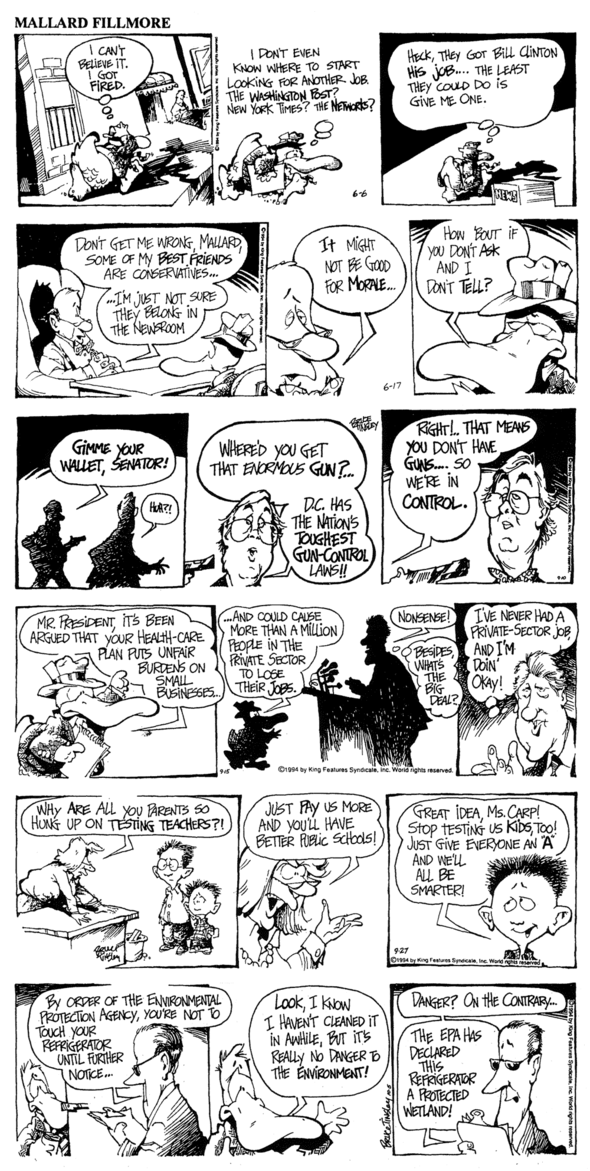 To Timothy Fisher:
As I might have added, Seein’ Stars was part of the pre-saturation era of star fame, and that may explain why it and features like it were never extremely popular. I might guess that editors saw it as free advertising for movie studios or local exhibitors. Actually, less than free to the client paper, as they had to pay to run syndicated material. Still, there have been others since then, and maybe there will be again.

To Jens, Michael Novak:
I would happy to show more, but you know, this is just one of those series for which we didn’t save a proof file, and the ones presented had to be taken from other sources. Things with a very short shelf life, like editorial cartoons, never get much respect in their own time, because re-sale value would be nonexistent. Besides, Hollywood stars don’t all have lasting appeal. Take it from me, there’s many, many examples between still recognizable faces as I’ve shown last week that show actors that I don’t know if even the most die-hard 1930’s film buffs can place now, folks like Sandra Storm or Florine McKinney, for instance.

Yours,
The KFS Archivist