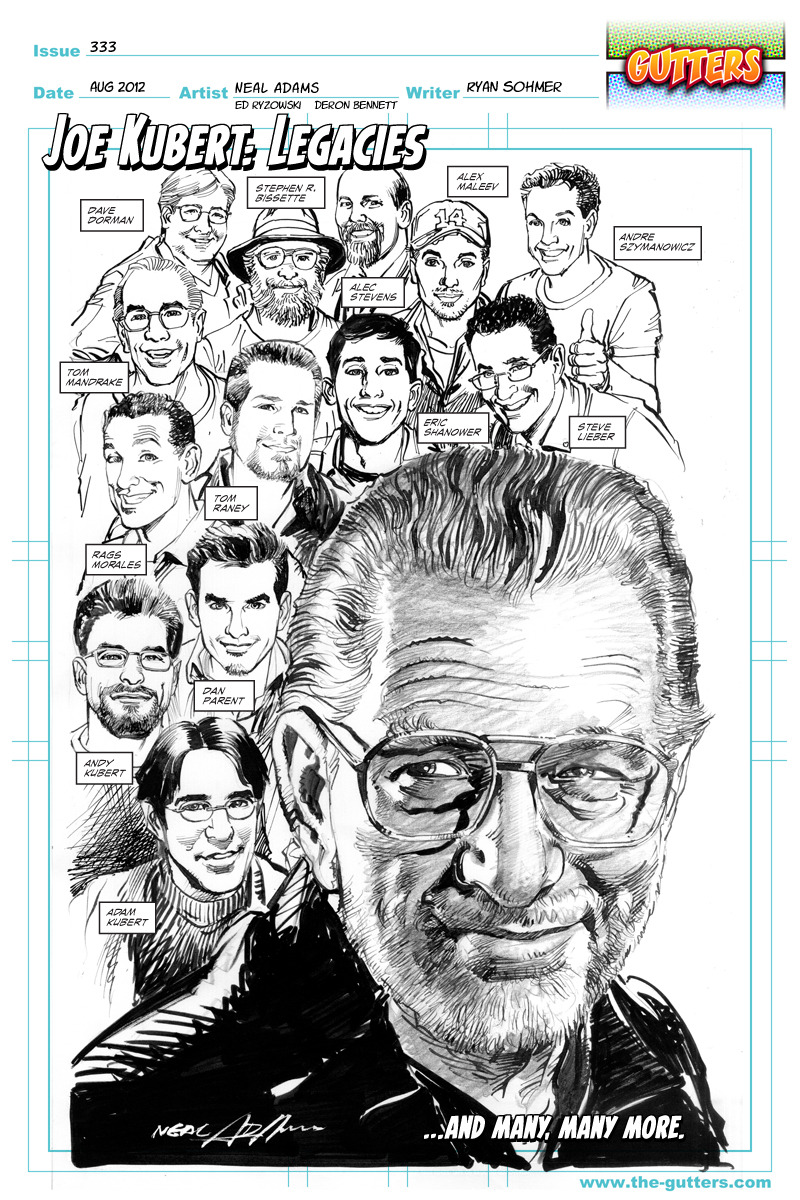 So, Monday was National Cartoonists’ Day; today is Teacher Appreciation Day, because obviously those teachers had to put up with a lot of rowdy cartoonists earlier in the week, oops!

I asked our cartoonists to share stories about their favorite teachers today.

The teacher in Curtis is directly based on a teacher I had in the third grade. Her name was Mrs. Nelson, just like Curtis’ teacher. As I remember, she was a strong African-American woman with grand grace. She wore glasses that she almost constantly fiddled with. Although she was large in frame, she always stood tall and stressed to us all that we were destined for greater things in life. We were somewhat afraid of her. You did not come to class without your homework, and there were no class clowns. I guess when you’re in the third grade everyone taller than you could be intimidating. If she ever got annoyed, she would lift her glasses over her eyebrows and glare at whomever with eyes wide open. Truly a terrifying sight. What made her special to me was the fact that she was my first teacher who noticed my artwork. She told me that I would be an artist one day, and even wrote that fact on my report card for my parents to read. She was the first to push me on the path. She had faith in me. The rest is history. –Ray Billingsley, Curtis 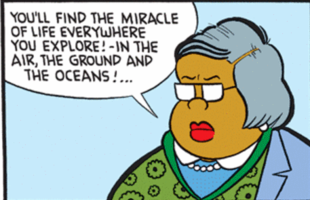 One of my favorite teachers growing up was a woman named Mrs. Johnson. Back in junior high school she was my English teacher as well as the school librarian. I’ve always loved books and she took a liking to me for some reason. She used to let me stay in the library before and in-between classes. I’ll always remember her exceptional kindness. I loved being in her class. She strongly resembled Mrs. Nelson from the CURTIS comic strip in looks and personality. –Karen Moy, Mary Worth

Mr Haycooper took my Grade 5 class (is that right? I was about 10) and was always great fun. One April Fool’s Day he took a whole hour to teach us the digital time we’d be switching to – 100 seconds in a minute, 100 minutes in an hour, etc. –Alex Hallatt, Arctic Circle

I made up my mind to be a cartoonist at an early age and began selling to magazines when I was 12. As I got older I realized that knowing how to write was a very important element in a cartoon. In college I enrolled in all the writing courses and did very well. I was the star student in one class and the professor got very excited about me. One day he invited me to dinner at his home with his wife. All through dinner we talked about books and writers. After dinner he pulled his chair over facing me and said with a big smile, “Well, I guess you’d like to write the great American novel.” I said, “No.” His eyes got big and he said, ” NO? What then do you want to write?” I said,, “I want to write the great American comic strip.” He almost fell out of his chair and he got up and left the room. I was no longer his prize student. –Mort Walker, Beetle Bailey

As every struggling cartoonist knows, the Obi-Wan to our Luke or Leia is often the art teacher. So it was with me. My high school art teacher was Ed Mack, a thin, bearded man who would have looked at home with a set of bongos and a beret. He was the hippest guy in Wilton High School, very smart and soft spoken and kind. He was always encouraging and put up with an awful lot of hi-jinx and shenanigans (young folk may have to Google those terms) from us hippie students.

When I had a particularly large art project in the works, he happily let me use his desk to spread my stuff out on. Barbara Moore and I were voted Most Creative and there was a photo of us throwing a pot (make up your own jokes) on a record player in that art room.

I just loved Mr. Mack. After all the Math teachers wouldn’t let you blast John Mayall’s “The Turning Point” during class. The phys-ed coach couldn’t discuss existential dread… he could only manifest it!

After high school I came back for a party honoring Mr. Mack that his former students put together. Generations of artists had there artwork on display including my brother Chance and myself. The art room that I practically grew up in was gone. I don’t mean repurposed, I mean gone! It had been destroyed in a kiln explosion and now where there had been a door there was just a brick wall. Very strange! I mean this is the room where I learned to paint. Where I kissed my first girlfriend, Cathy. Where I kissed my second girlfriend, Louise. Gone, baby, gone! My kingdom for an Einstein-Rosen bridge back to those days!

Mr. Mack and I have stayed in touch. He moved to Arizona and I to South Dakota but thanks to Facebook and the Space-Time continuum and fond memories, we will always be connected. –Chris Browne, Hagar the Horrible 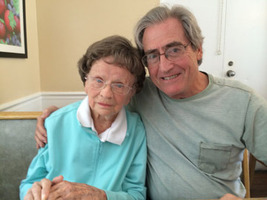 Here is my darling high school English teacher, Mrs. Jeanne Parrish. I went to Manatee High School in Bradenton Florida, home of the Fighting Sea Cows. Mrs. Parrish is 94 years old. She still loves me, and the feeling is mutual.This was a long time ago. She had returned graded tests to the class. She had given me a 94, but I noticed that she had made a mistake and I deserved an 86. When class was over I brought it to her attention. She told me that she wouldn’t forget me. She never did.–Bud Grace, The Piranha Club

One weekend, when I was in fifth grade, I told my parents I was going up to my room to write a book. At the end of the weekend I had written and illustrated a book, filled with lots of cartoon illustrations! It was entitled “K.C. The K-9.” The book was about a crime-solving dog that worked for the police department. My parents have always been very supportive of my cartoons and they really liked the book I created. So they told me to show the book to my fifth grade teacher, Mrs. Boatwright. My teacher really liked it and, unbeknownst to me, showed it to Mr. Loving, our school principal. They both really got behind me and suggested the school publish the book! This was in the days of mimeograph machines. So, using those machines, my teacher and principal at Falling Spring Elementary School published about 100 copies of my book. They even held a book signing for me in the school library and invited all the students and parents to attend! It was the first time I ever made money as a cartoonist. But, more important than that, it showed me that my parents, my teacher and my principal all believed in me. Their support of my cartooning ambitions made this fifth grader believe that one day he could really become a cartoonist! Of course, I am grateful to my parents for their support, but I am also especially grateful to Mrs. Boatwright and Mr. Loving, because they went above and beyond the call of duty for this student. A good teacher can really make an amazing impact on a student. –John Rose, Barney Google and Snuffy Smith

When I’m not drawing Zippy, I teach comics at the School of Visual Arts in New York.
Over the past few years, I’ve learned as much about comics from my students as they have from me. On the other hand, Zippy’s teachable moments come from other sources—like Flo the diner waitress. –Bill Griffith, Zippy the Pinhead

I was in the third year of art school at Washington University in St. Louis, I was a terrible student, I was either too late on my art assignments or didn’t do the assignments correctly and I was more interested in being in school plays or working on the school newspaper. I had gone to summer school all through High School and college to get to the next year, I just thought i wasn’t a good student and That’s what I always did.In college I was dating the dean of students daughter ( Marian, my fabulous wife) The dean hated that I was dating his daughter, He was the DEAN OF STUDENTS for God’s sake , He had all these A student Boys lined up for her to date and she was dating this looser. He knew my grades were awful ( they were so bad I was social probation from my fraternity ( Sigma Chi ) Which meant I couldn’t take Marian to any fraternity parties. The first day back to school I was called by the dean of the Art School ( Dean Mckay ) in to his office. I knew I hadn’t done anything wrong yet it was just the first day. He said he had noticed my records and had seen that I had gone to summer school every year up to now, but at Washington University in the Junior and senior year you actually had to pass all of your classes, you can’t fail and go to summer school like I had been doing. And If I didn’t pass I would have to leave school. The whole idea of passing all my classes had never occurred to me before and I thought I would never see Marian again. So I went to my teacher from last year, Mr. Burnell, and told him what the dean had said. And I said to Mr. Burnell “You know the grades I get, What should I do? ” Mr. Burnell put his hand on his chin and thought a long time. ( Mr. Burnell would think a long time if you asked him his name.) Eventually he said,” You like drawing cartoons , don’t you? ” I said yes, He said ” Well, start drawing cartoons in all your art classes” I said ‘What do you mean? ” He said ” “In your figure drawing class , exaggerate the figures and and turn them in to CARTOONS, In painting class , paint CARTOONS, in design class design CARTOONS…” I said ” Mr. Burnell , won’t I get in trouble?” He said ” Mike , you’re already flunking” So, for the next semester I did what he said , No teacher said a thing about the stuff I was doing, so I had no idea if I was going to flunk or pass. When My report came in the mail , I opened it up and I had all A’s and B’s. I couldn’t believe it , I stayed in school , Marian’s father wanted to commit suicide and Mr. Burnell showed me what my life’s work would be. Thank you Mr. Burnell –Mike Peters, Mother Goose & Grimm and Editorial Cartoons

As a teacher and mentor Joe Kubert legitimized drawing comics/cartoons as a career for me. Today there’s a number of colleges that recognize cartooning as an art form, but the first school out there solely devoted to Comic Art was Joe Kubert’s. With Joe at the helm, the school actually nurtured a student’s love of comic art and storytelling WAY before “graphic novels” starting seeping into the general public’s lexicon and acceptance. Joe Kubert passed away at 85 in August of 2012. The following pic is a drawing by legendary artist Neal Adams of just a few of the other Kubert students who got their start at Joe’s School. Quite the legacy… –Jim Keefe, Sally Forth and Flash Gordon

That’s all for today– remember to use the opportunity to thank a teacher in your life!