Here’s an obscure strip that began thirty-five years ago this week, “No Comment” by Vahan Shirvanian which began as a daily and Sunday starting on 9 April 1979.

There is a tradition in pantomime strips, mainly foreign titles like Swedish import “Adamson’s Adventures,” the Danish “Ferd’nand” or “G. Whiskers” from France. In the U.S., “Henry” and “The Little King” have been the leading silent strips, though the art of sustaining a series entirely in mime is a very hard feat. Eventually, there must be some talking, if not by the star, everyone around him, or, the star breaks down and “talks” via thought balloons as animal characters like Snoopy and Garfield do … and Brimstone. 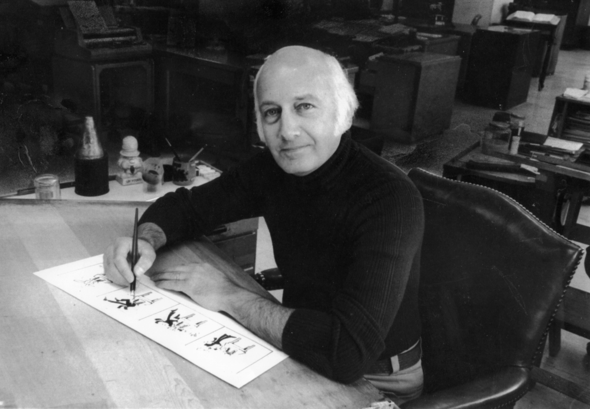 VHAHAN SHIRVANIAN (1925-2013) PROBABLY IN 1978. HE IS DRAWING HIS MAGICIAN AND RABBIT COMBO. FROM THE EARLY DAYS OF “NO COMMENT,” BUT IN THE FORMAT SEEN HERE, THERE’S A LINE RATHER THAN BOX SEPARATIONS BETWEEN PANELS, INDICATING HE’S WORKING ON SAMPLES TO INTEREST SYNDICATES IN THE PROSPECTIVE SERIES.

“No Comment” went through three phases and lasted three years. The series originally had several revolving sets of characters: a man and wife who fight over things; a Fakir; a magician; a huge dog; and a guy with a checkered cap who does odd jobs and one-shot gags. 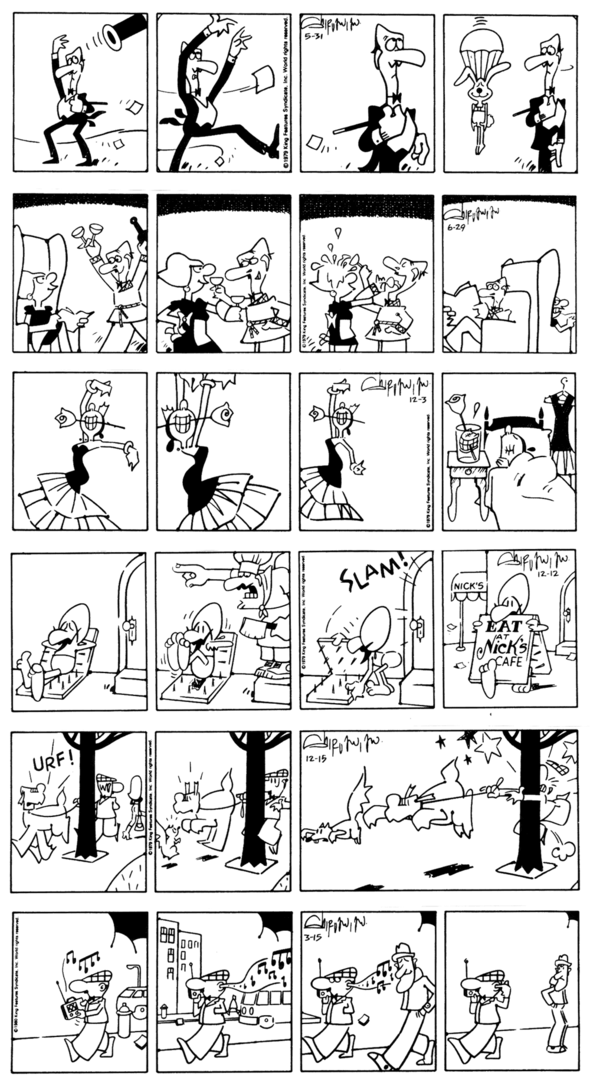 For a while, an elephant became the main character. Shirvanian must have had a pachyderm gag file. He had been doing cartoons for magazines since the 1940’s, so he might have had thousands of theme ideas. 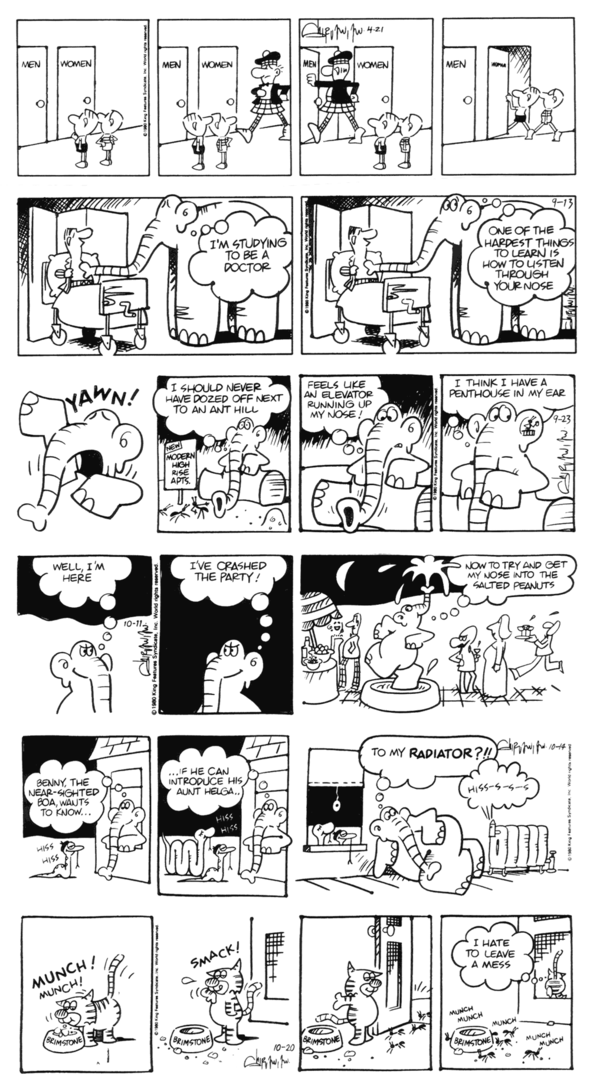 All along, he had cat jokes, and the cat slowly became the star named Brimstone. He took over the whole series, and the others were retired.

Brimstone at first stayed at Kelly’s service station, where he lived like a lovable slob king, making friends with the mice and neighborhood kids.

In the final year, the gas station was forgotten and Brimstone started hanging out on a wall and flirting with girls passing by. In the final week, he moves in with one of them. By then, there was little reason to call it a pantomime strip any more. “No Comment” never found much of a following. Perhaps, Brimstone impressed a lot of editors as a fake Heathcliff, which Shirvanian seemed to emulate. The final episode was the Sunday of 25 April 1982. 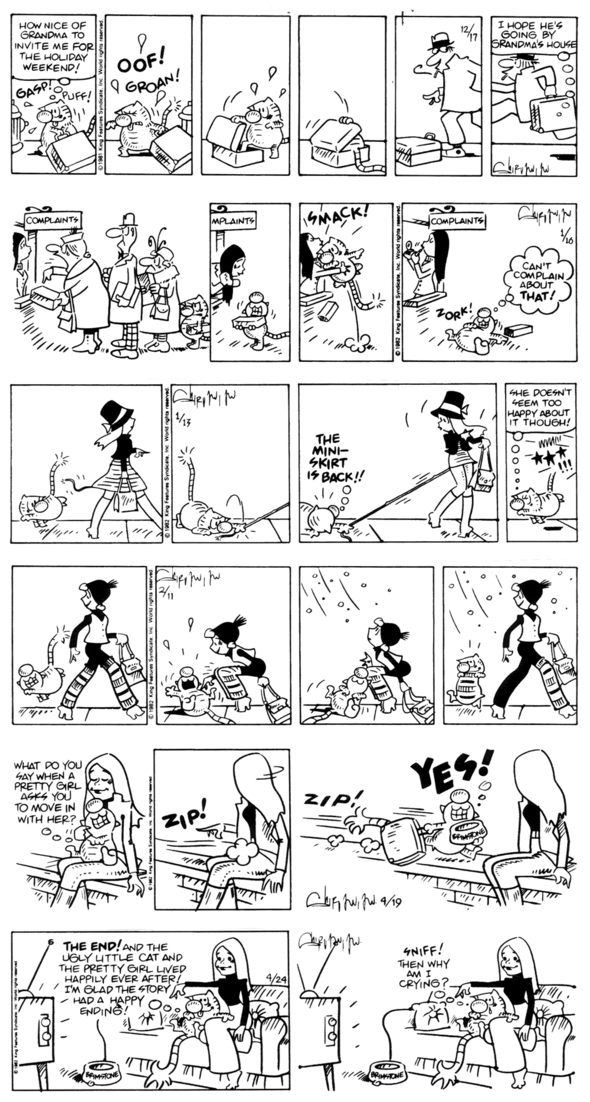 Below are some replies to last week’s reader comments:

I leave it to you, Mr. Rose — Think Mr. Fisher’s sentiments on Miss Buzz? Obviously, she has impressed some fans more than others. Perhaps, she’s good enough to make an appearance every fifty years. Maybe not.

The voices on the Snuffy Smith TV cartoons were Penny Philips as Loweezy and Bizzy.
Snuffy and the other male characters were essayed by Paul Frees. Bizzy showed up in these cartoons: THE BUZZ IN SNUFFY’S BONNET, SETTIN’ AND A FRETTIN’, BIZZY NAPPERS, and THE BIG BEAR HUNT. All were released in 1964. Check them out on the Internet if you’re interested.

Thanks for suggesting the blog idea. Getting on in years, your Archivist is a guy with a tendency to forget stuff, but never important things like Bizzy Buzz Buzz. Maybe now that we’re all aware of it, we can celebrate Tater’s birthday when it comes up this autumn.

The baby that the Smiths had in the mid 1930’s, it would seem, was just not seen by DeBeck as a useful character, and so just stopped appearing, sort of like Spark Plug. It just happened so gradually, nobody noticed — DeBeck included! When Lasswell took over, he brought Sparky back once in a while, accompanying Barney on his visits to Hootin’ Holler. But, by then, the baby had been completely forgotten.

I’m not a masked crusader. I ran out of masking tape long ago. My enemies are the usual crowd: Jesse James, Dr. Moriarty, Gargamel, The Klingons, etc.

Thanks for stopping by. Join us again next week for another edition of “Ask the Archivist.”