Sad news: our scratch n’ sniff comics feature had to be removed from the site, as we’ve been informed it was severely slowing down page loads and causing allergic reactions.

We hope you survived April Fools’ day intact! This week, I asked cartoonists to share some of their favorite pranks– ones they’ve played, ones people have played on them, and ones featured in their comics.

Earlier this year, the penguins constructed a subway station that got poor Howard very excited….

I’ve never played an April Fool’s prank on anyone because April Fool’s pranks are either cruel, boorish or childish.
The ‘best prank’ played upon me was cruel, boorish AND childish. It scarred me for life and I don’t want to talk about it.
I haven’t featured a prank in ‘Pros & Cons’. If I did, rest assured, Detective Defoe would arrest the prankster, Gillian Jaggers would prosecute the prankster and Judged Jeffries would sentence the prankster to 200 hours community service. See how funny Bill Gaughan, my ex-boss at 999 Design, who squirted lighter fluid under the toilet cubical door I was occupying and then set fire to it, thinks it is then.
On second thoughts, 200 hours community service is way too lenient.
–Kieran Meehan, Pros & Cons 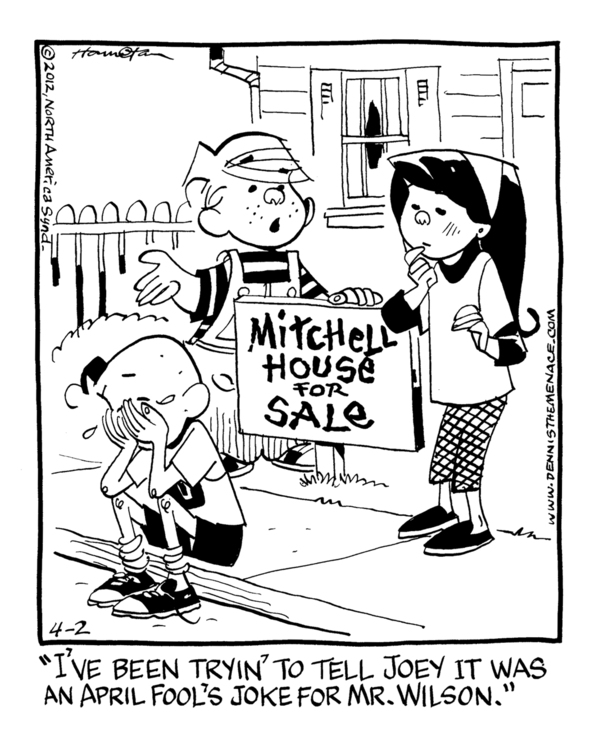 I think as a cartoonist, you’re kind of hoping all your comics are pranks.

A long time ago, before desktop publishing, I worked as a graphic artist for a small magazine. We used hot wax to attach art and text to our layouts. On one April Fool’s day I dipped several q-tips into the waxer and then left them on desks of people in the editorial department. The Q-tips were laden with huge disgusting blobs of molten wax. (I thought it was funny, anyway.)

The best prank played on me was when I was in college, and working nights in a donut shop. One night, while I was setting up for that night’s production, a counter girl who shall remain nameless ( we briefly dated) stuffed my coat with day-old donuts. Thankfully, none were jelly-filled. That ranks right up there with the time I was taking a nap (remember, I was working nights!) in the art studio at the University of Nebraska at Omaha, with  my head down on a large table. My good friends, never ones to pass up an opportunity to humiliate one of their own, taped me down to the table. They fell over laughing when I woke up, and couldn’t lift my head off the table.

My favorite prank that I played on someone also happened in my college years ( no surprise there ). One night while my roommate was asleep, I piled all our furniture at his bedroom door. The next morning, he had to utilize the window to get out.
Good times!
–David Hitch, Editorial Cartoonist
I’m sure this will be a common reaction among us cartoonists, but the best April Fool’s Day event that I ever took part in was the Great Comic Strip Switcheroonie of 1997.  On that date I drew Michael Jantze’s fondly-remembered “The Norm” and Jim Toomey of “Sherman’s Lagoon” drew “Fastrack.”
Here’s Jim Toomey’s art:

The best April Fool’s Day trick I ever pulled was when I was 7 I filled the sugar bowl with salt. Turns out my old man didn’t have much of a sense of humor. If you read my comic strip, you’ll see plenty of pranks pulled by 7 year old Spencer. I think his best prank happened twenty-some years ago when he put super glue on Ernie’s toilet seat. Sid charged for tours of Ernie’s bathroom with Ernie, pants down glued to the seat. Not long after that appeared, a copycat in Las Vegas pulled the prank. The poor guy who got glued sued the Casino where it happened.

In 1997, we came up with the idea that it would be cool to have comic strip artists trade comics on April Fool’s Day. The result was The Great Comic Strip Switcheroo of 1997. You can read about it here and here.
Rick wrote a blog post about it last year.
The Museum of Hoaxes lists the Swticheroonie as #32 of the Top 100 April Fools Day Hoaxes of All Time. No, really.