Today, the name Clifford McBride (1901-1951) means only one feature, “Napoleon and Uncle Elby.”  However, in the years before that strip, he did an anthology panel for one of the Hearst small brand syndicates, Central Press. 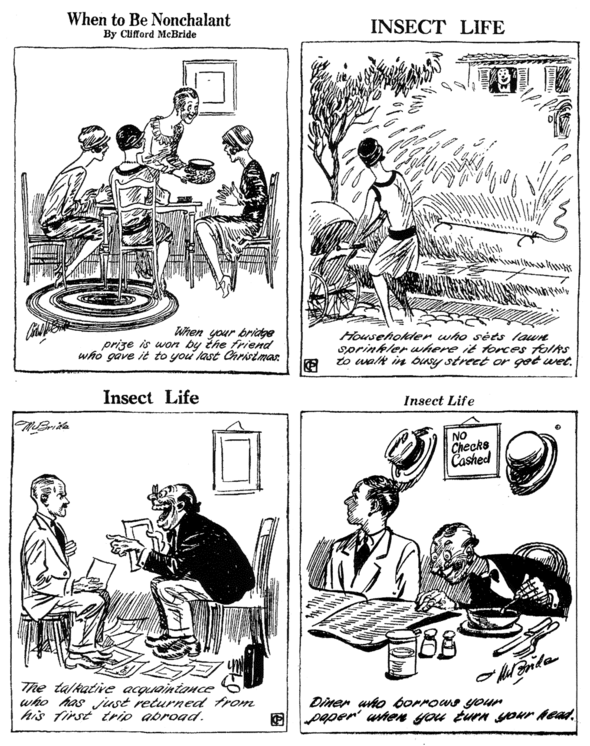 His first nationally syndicated series was a Sunday feature that was given the bland title, “McBride’s Pantomime Comics,” which were just that, a bit of action in so many panels. They were an outgrowth of a local feature originating in the Los Angeles Times, and syndicated by McNaught from 1925 to 1933. In an unusual turn, he was able to do the Central Press series simultaneously, from 1927 to 1932. These were sold under the equally plain title, “Clifford McBride Panels,” but they came with separate sub headings, much as the leaders of the genre, Clare Briggs and H.T. Webster.

Those two had different styles of humor than McBride, though. Briggs was a very sentimental man, with heavy emphasis on highs and lows of his 19th century small town boyhood. Webster was 10 years younger than Briggs, but his wit was sharper, more sarcastic, and often more psychologically insightful. 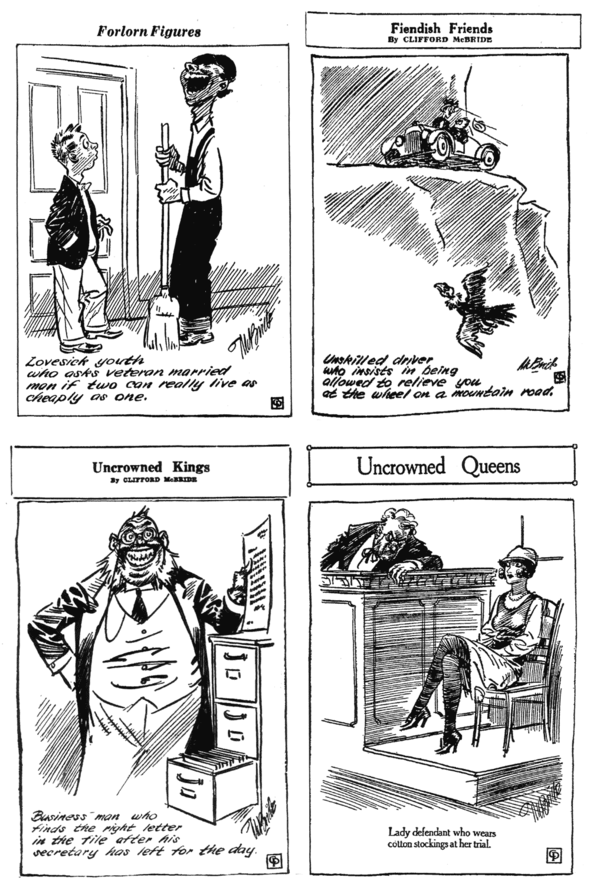 McBride was a different yet, concentrating on quick recognition of a situation alone. One of his earliest series was something called “Do You Remember?” which revisited the same childhood moments that Briggs or Webster might have done, with little fresh nuance. McBride was really not a man of nostalgia, rarely even drawing children. His real specialty was the awful moment when someone  does something exasperating you can’t escape, and nothing can be done about it. 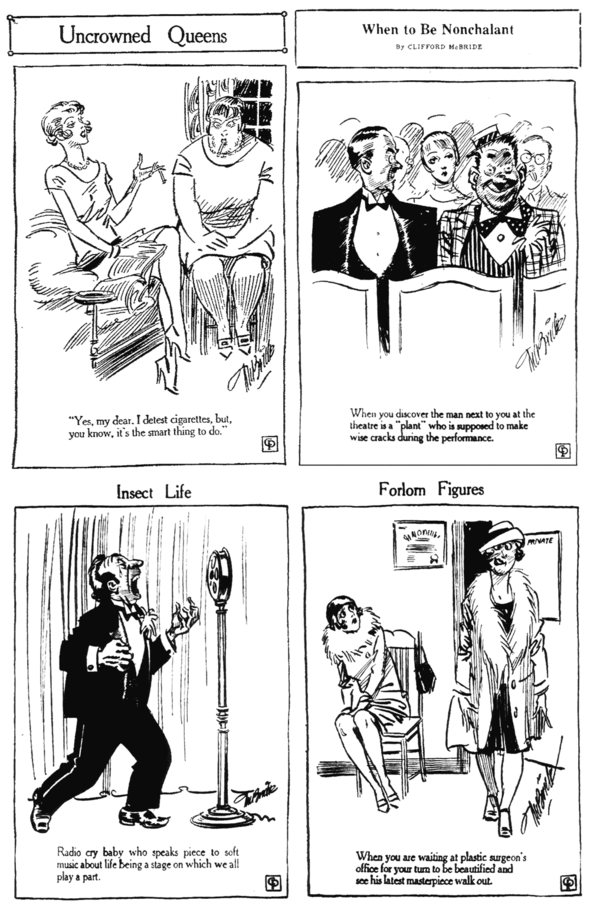 He delighted in making grotesque comic valentines of those that would annoy him, and one can see he didn’t suffer fools gladly. On the other side of the coin, he commended those who would make the effort to be superior to these everyday tyrants and human weaknesses, such as  the ambulance driver who keeps the siren quiet when he’s merely  going to lunch or the salesman who doesn’t cheat on his expense report. 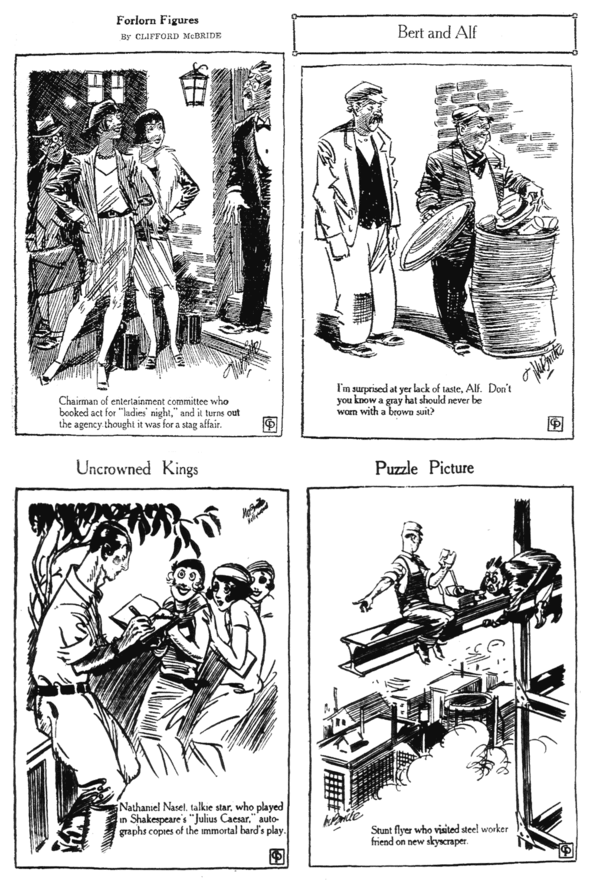 He didn’t develop any characters until near the close of the series (though Uncle Elby and Napoleon popped up once in a while). “Bert and Alf” were two tramps who would comment on the ever-deepening Depression starting in 1930. They would usually talk as if they were oblivious to their situation, debating fabulous salaries of famous people or the comparative merits of luxury automobiles, while they huddled under a box car or something like that. 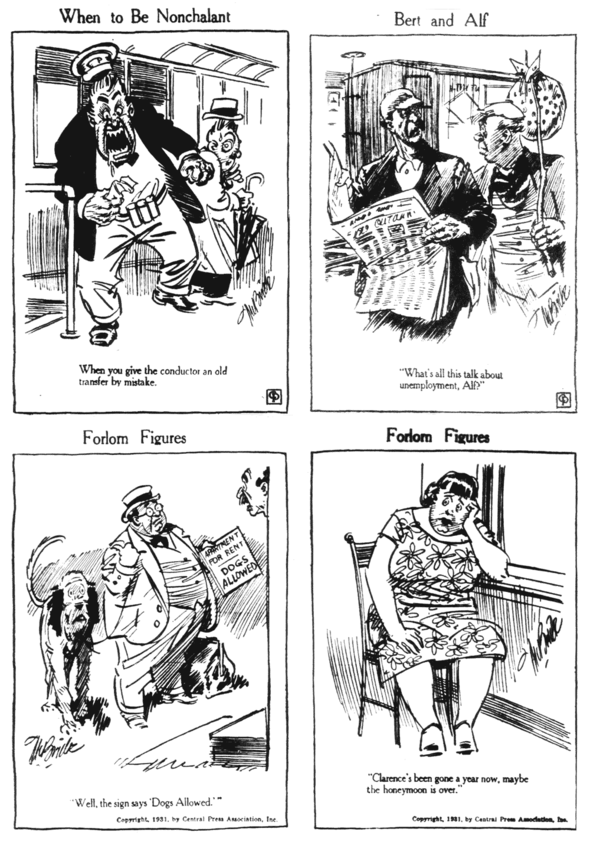 In mid-1932, McBride left the panel to go on to fame with the Napoleon strip, syndicated by the tiny LaFave Newspaper Features Company. The Central Press panel was ghosted for several months before it was discontinued.

Yours to a cinder,