The comics have given us some of the world’s great romantic couples– Popeye and Olive Oyl, Blondie and Dagwood, Clark Kent and Lois Lane, Iron Man and Captain America (oops, how did that one slip in there?) — and we’ll be celebrating them all week long on Comics Kingdom.

1) Dustin and his Couch 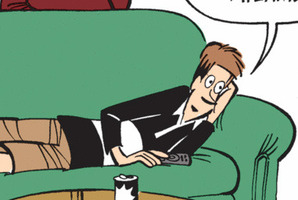 Sure, Dustin could be out pounding the streets, looking for work, but why, when the love of his life is right in the living room in front of the TV set?  The couch is warm and cozy and doesn’t nag him about putting on pants or asking when he’s going to get a paycheck.  The couch accepts him for who he is.  And when he’s gone, there is a Dustin-shaped dent in its cushions.

Machiavelli reminds us that it’s best to be both feared and loved, and Dennis the Menace has taken that advice to heart when it comes to the object of his affection, Mr. Wilson.  Who needs ratty girls like Margaret when you’ve got a next-door neighbor you can terrorize?  Especially when Mrs. Wilson gives you cookies every time?  Sounds like a win-win situation to me!

Sarge is the kind of guy who wakes Beetle up every morning, makes sure he exercises daily, and keeps him from lazing about. Now, that’s the kind of dedication everyone should want in a loved one.  And Beetle’s always there to rescue Sarge when he finds himself dangling off a cliff– err.  When he’s not napping. 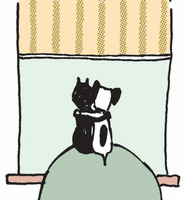 The cuddly cuties of Mutts are proof that opposites attract.  Mooch may style himself as an independent sort of kitty cat, but he’d be nothing without his best buddy to listen to his harebrained ideas and set him on the right track with the simple wisdom only a dog can provide.

5) Dagwood and his Sandwich

They say the way to a man’s heart is through his stomach, and it’s lucky Blondie is a successful caterer, because it couldn’t be truer for Dagwood Bumstead.  There are only two things Dagwood loves more than a sandwich: his family, and a sandwich with extra pickles! 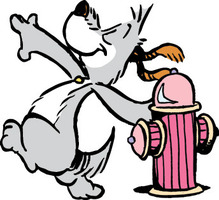 Irene may be an inanimate object, but Buckles’ love for her knows no bounds.  Ah, that brilliant paint job could attract anyone, and the way she stands so solidly and unmoving in the same place outside Buckles’ home, almost as if she is waiting for the chance to see him again.  And who says she’s not? 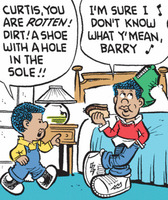 Curtis certainly has his share of girl problems– nothing ever seems to go right for him in the relationship department.  On one hand, Michelle, the love of his life, can just barely stand his presence, while on the other, Chutney is totally smitten with him, but he just likes her as a friend.  At the end of the day, though, Curtis can ALWAYS count on his little brother for a good dose of fraternal affection– and Barry always tells it like it is!

The twists and turns of adolescence are best navigated with a BFF, and Hilary has one for the ages. While Hillary has inherited her father’s whimsy and sense of the absurd, Faye is more practical and grounded, but not without her own, sometimes acerbic, sense of humor.  The two of them stick together in good times and bad, even when they don’t always understand each other. 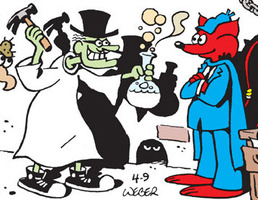 “What?” you ask, “but aren’t they mortal enemies?”  Oh, sure, sure, it may look like Count Weirdly has tied up Slylock Fox and dangled him over a vat of acid full of piranhas AGAIN, but I was always told that if a boy goes out of his way to pick on you, that means he likes you!  And hey, Count Weirdly is responsible for at least 75% of Slylock’s cases– without the villainous Count, Slylock would have to find another line of employment!

Mamet’s been looking for love for just about as long as we’ve known him, but after all the blind dates smacked them with their purses, the mail-order brides took the first flight back to Russia, and Scarlett Johansson took out a restraining order, maybe he’ll just take a good look in the mirror and realize that the only person who can appreciate just how great Mamet truly is…is himself!  And hey, since he’s his favorite topic of conversation, he’ll never be bored again.

So whether you have a romance in your life or not, remember that Valentine’s Day is for celebrating all kinds of love– family, friends, archnemeses, and the downright weird!

Who are some of your favorite overlooked Valentines of the comics page?