Super Bowl XLVIII is upon us and the festivities are in full swing here in New York. Players from both teams “stopped by” our office to participate in the first annual King Features Bowl. Here are the starting lineups for our own comic showdown. 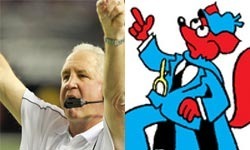 This cunning strategist spots the 6 missing pieces in any defensive line. Maybe we’ll all learn to draw the Lombardi trophy in next Sunday’s Slylock Fox & Comics for Kids. 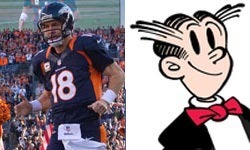 A veteran at the top of his game, Peyton is as respected on the field as Blondie is on the comics page. You’d need an appetite like Dagwood’s for all those Papa John’s ads. 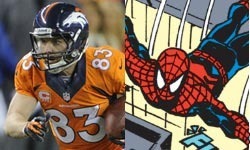 Just like your friendly neighborhood Spider-Man, he’s small, fast, has sticky hands and is always looking out for others. 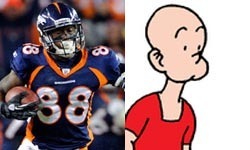 Known for being shy and quiet as a kid, his actions on the field speak volumes. Like our silent, but strong Henry, he never backs down from a challenge. 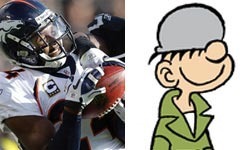 You won’t find this soldier sleeping on the gridiron. He’s the Broncos’ all-time interceptions leader. Beetle Bailey could learn a thing or two from cousin Champ’s work ethic. 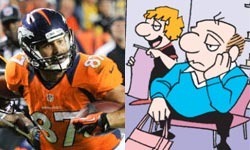 They may look like the perfect couple in these photos, but Eric and country star wife Jessie James surely have their Lockhorns moments. 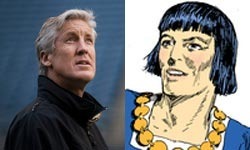 Voted “most popular coach in the NFL” by ESPN.com, warriors are lining up to follow Coach Carroll into battle as if he were Prince Valiant. 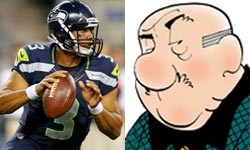 OK, so maybe he doesn’t have much in common with Dennis’ elderly neighbor. But, this QB is definitely a MENACE to the opposing defense. 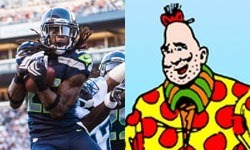 He may not look like a Pinhead, but that little bit of crazy might just fit in among Zippy and the gang in Dingburg. 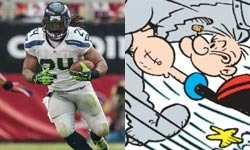 He’s not the biggest guy on the field, but he can plow through the toughest of linemen. Sounds a lot like our favorite spinach-loving brawler, Popeye. 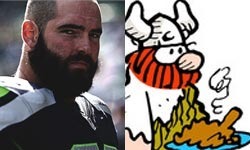 With that famous beard and imposing stature, he would fit right in among Hägar the Horrible’s Viking army. Be glad he’s defending the QB and not storming your castle. 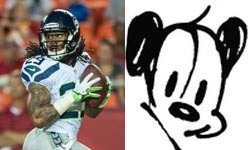 Is that Mooch’s canine buddy from Mutts? Perhaps not, but anyone with such a regal name is welcome here at Comics Kingdom. 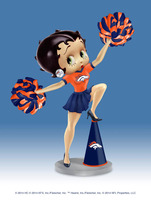 And, what football game is complete without the cheer squad? The Queen of Cartoons, Betty Boop herself, was on hand to cheer on her favorite teams. Check out her collectible NFL figurines collection here.

Did we leave out any MVPs? Make you own comparisons of famous footballers to your favorite comic strip characters in the comments below.