Another 80th anniversary of a great strip has arrived, the legendary Secret Agent X-9. This was the third launch in a month for artist Alex Raymond, who just started Flash Gordon and Jungle Jim two weeks earlier. See HERE.

This strip was written by Dashiell Hammett, popular writer of crime potboilers in the 1920’s and 30’s, best known for the character Sam Spade of “The Maltese Falcon” fame, and crime-stopping couple Nick and Nora Charles in “The Thin Man” series. Secret Agent X-9 would be an unusual character for him. Not only was he made specifically for a comic strip, he would be a government operative instead of a private eye.

However, the actual authorship is a bit shaky, as Hammett was pretty much exhausted as a writer, with alcohol and other demons taking up most of his time. It’s unknown whether he, in fact, had contributed much more than an outline and his name to this project; nevertheless, it constitutes among his very last new works. 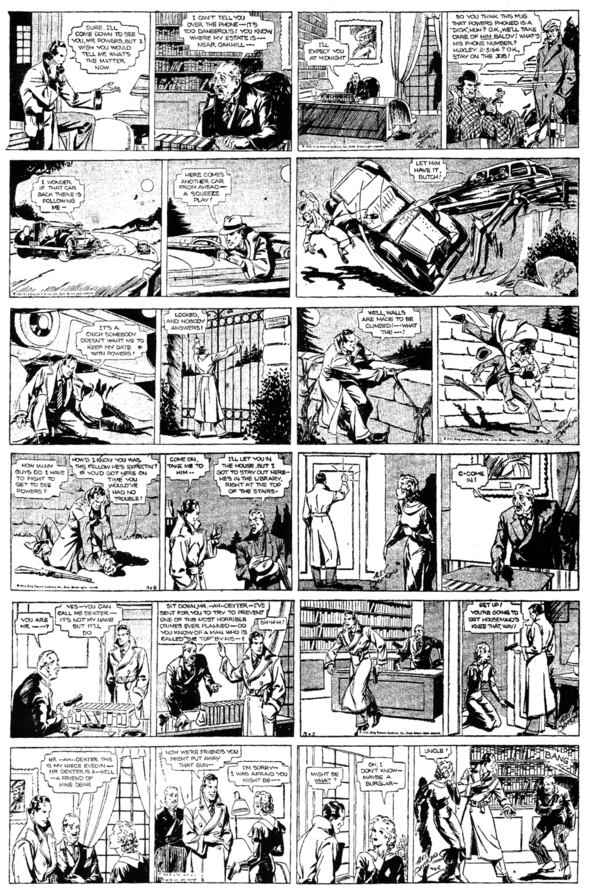 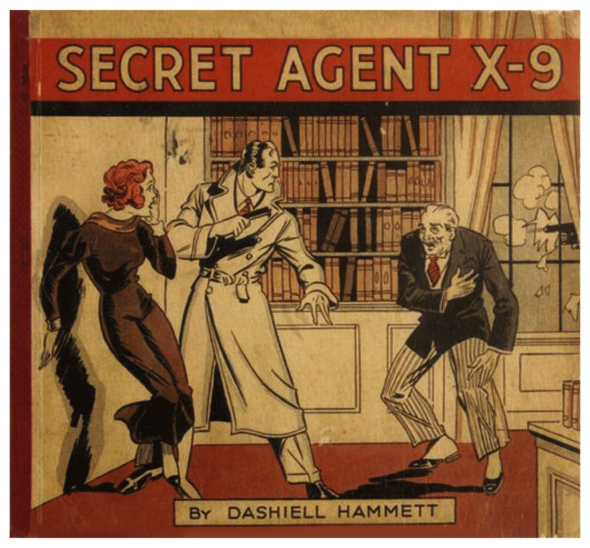 In an early comic book (1934) published by David McKay of Philadelphia, good use is made of the last panel in the sixth strip.

Hammett became unreliable early on, and had to be replaced as writer quickly. His name stopped appearing on it by mid-1935, when another master of the genre, Leslie Charteris, of “The Saint” fame, took over the writing tasks and got the credit also.

Raymond soon had to leave the feature as well, obviously his workload was immense. I can imagine that keeping up his finely detailed work on six dailies and two Sundays a week must have been grueling. He stopped signing his work in late 1935, and was replaced by Charles Flanders (also unsigned). Eventually, many other men would draw Secret Agent X-9, including Nick Afonsky, Austin Briggs, Mel Graff and Al Williamson before it was discontinued February 10, 1996. However, after Charteris left in 1936, instead of using more big name, expensive authors, it was given to “Robert Storm,” which was a nom de plume for uncredited King Features ghostwriters, usually the prolific Elliott Caplin.

Here are some replies to last week’s reader messages:

Good to hear from you again, ‘Whoop. Hatlo’s “factory” was more like a craftsman’s shop, with Hatlo being the old master. There were a lot of drawing chores to do there, with six TDIET dailies and a Sunday each week, along with Little Iodine Sundays and a monthly comic book to fill.

We will consider putting in Apt 3-G in the mix. Unfortunately, I think our files begin in the 80’s even though the series started in the early 1960’s.

Good to hear that the old strips can still give someone a serious thought. The ones that I posted last week had extra deep color because they were from original proofs. In those days, Sunday strips were issued not only in the black and white with three color guides for client paper use.  They also would be printed in full color as you see there. These “art proofs” usually would be sent to the artists and writers.

Yours until next week,
The Archivist