ASK THE ARCHIVIST: THE LAST OF E. C. SEGAR

Seventy-five years have passed since Elzie Segar passed away. He created probably the most popular, profitable and enduring cartoon character ever, Popeye.

Originally he worked for the tiny but lively Chicago Herald (“J. KEELEY”) syndicate doing titles like “Barry The Boob” and a turn at the “Charlie Chaplin’s Comic Capers” series, he joined King Features when the Herald was bought by William Randolph Hearst and combined with the Chicago Examiner to form the Chicago Herald-Examiner in 1918.

In 1919, he created “Thimble Theatre,” starring Olive Oyl and her dysfunctional family. It took until 1929 for Popeye to find his way into the series, but he soon took over the strip with the reading public’s approval, and Segar became a star cartoonist-celebrity.

Unfortunately he was a sickly man, and passed away at the age of only forty-four (born 8 December 1894). I transcribe an original obituary of that day:

The creator of “Thimble Theatre,” a quaint comic strip printed daily by more than 500 newspapers, and “Popeye the Sailor,” a movie cartoon with fans around the globe, died at his home here last night after a long illness. He was 44.

Since last January, his condition had been so serious that he did little actual drawing. Others carried on the whimsical adventures of Popeye, spinach eater deluxe; J. Wellington Wimpy, hamburger chef; and the Oyl family- Olive, Castor and Anna.

Recently Mr. Segar underwent an operation for removal of the spleen. But even that failed to restore his ebbing strength. He had been in a coma for 24 hours when death came, with Mrs. Segar, his 15-year old daughter Marie, and his 12-year old son Tommy at his bedside.

King Features announced today in New York that “Thimble Theatre” would be continued as a daily strip, just as “The Gumps” lived on after the death of Sidney Smith, the cartoon family’s creator, in 1935.

Mr. Segar was a native of Camptown, Ill, where he got his artistic start helping his father paint houses. When a St. Louis newspaper rejected his first cartoon, he took a correspondence school course. R. F. Outcault, drawer of Buster Brown and Tige, got him a job on the Chicago Herald Tribune turning out a Charlie Chaplin comic strip. But it was years before he struck a gold mine with the “Thimble Theatre.”

Popeye, the be-chinned sailor with a punch in either fist, was born in 1929 after Mr. Segar had moved to California. 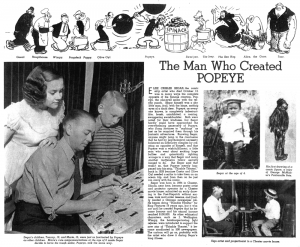 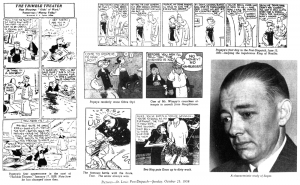 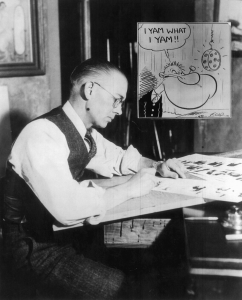 Mystery Picture: Segar at his home, pretending to draw finished strips. What does the inserted picture of a huge-chinned Popeye doing a radio broadcast mean? I own the original, and sadly, there is no notations on it. Anyone have any ideas? 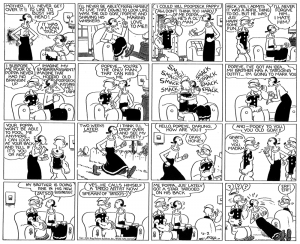 Yours truly, THE KFS ARCHIVIST