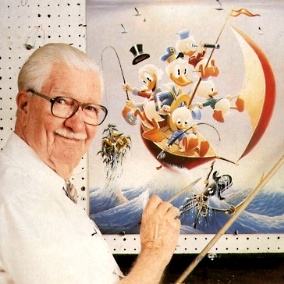 Unless you’re a comics junkie, you probably never heard of Carl Barks. Most of his  work, produced during the golden age of comics from the 40s and into the 60s, was published unsigned.

But everyone knows his creation, Donald Duck’s Uncle Scrooge McDuck.

Carl Barks worked as an in-betweener and gag writer at Walt Disney Studios in the 1930s. At the same time, comic books began to gain popularity and soon Disney was producing several titles featuring their wildly famous characters.

Illustrating Disney comic books was a good moonlighting gig for many artists in the animation department at the time, and Mr. Barks found the solitary work of creating comics more satisfying than working on the Disney “factory floor.” Soon he was offered steady work writing and drawing stories for Donald Duck and his nephews.

Mr. Barks’ adventure stories showed a different side to Donald Duck than the ill-tempered character seen on screen, and to help the stories along, he created a cast of memorable supporting characters unique to Disney comics, Gladstone Gander, Gyro Gearloose, the villainous Beagle Boys, and his most famous, Scrooge McDuck, who was quickly featured in his own spin-off comic books. It wasn’t hard to notice how Mr. Barks’ work stood out among Disney’s other comic artists and writers.

Mr. Barks’ stories were as masterful as his art. I remember pouring over his Donald Duck and Scrooge comics as a kid, and never knowing that a guy named Carl Barks was behind them until my parents gave me a bound volume reprint of 10 Donald Duck comics from the 40s and 50s when I was 18. Mr. Barks wrote the forward. Mystery solved.

All the little illustrated novels in the book are superb, but one in particular, “Uncle Scrooge in ‘Only a Poor Old Man'” stands out at the best of the best (though I’m still puzzled why it’s titled “old man” and not “old duck”).

The page I include below from “Only a Poor Old Man” is jaw-dropping. The story goes that Scrooge is being run ragged protecting his “umpteencentrifugillions” from the dastardly Beagle Boys who ingeniously keep Uncle Scrooge’s vault under constant attack. Scrooge decides he must find a better place to hide his money and with the help of Donald and the nephews they find the perfect place, a reservoir behind a dam. The Beagle Boys soon discover the underwater treasure and resume their attacks. This page acknowledges their eventual victory in procuring Scrooge’s fortune. The detail in that last panel is sheer perfection.

Happily, Mr. Barks eventually received the recognition he so deserved once he retired in 1966, living to the ripe old age of 99 when he died in 2000.

I don’t know a cartoonist who isn’t a huge fan of Carl Barks. He showed us all how to write a story with a drawing pen. 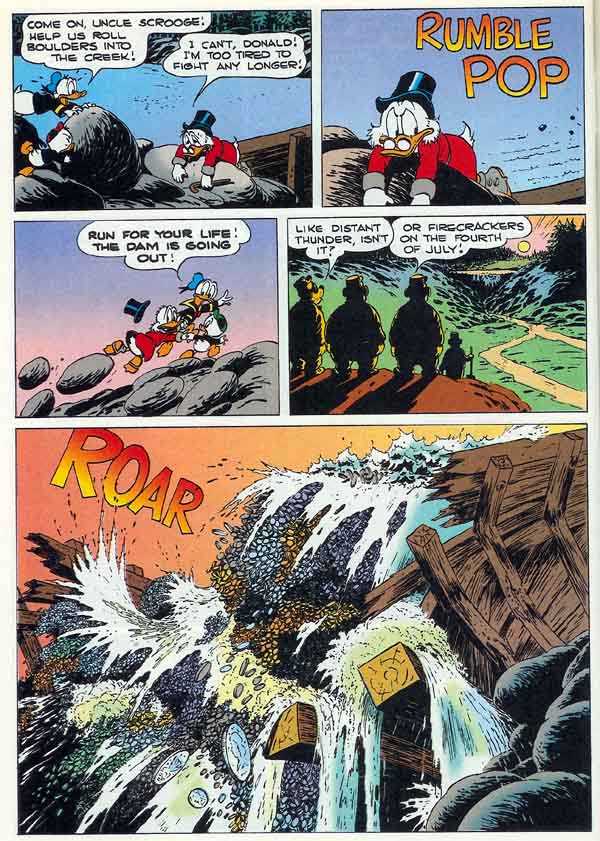