MANDRAKE THE MAGICIAN had proved popular enough since its June 1934 daily debut to rate a Sunday the following year.

In early 1935 the Hearst newspapers tried an experiment with the company’s trademark comic section, “Puck.” They started to publish tabloid-only sections. Many features that were successful in the standard-full format with a top comic stayed that way, like King Features stalwarts such as Bringing Up Father/ Rosie’s Beau or Tillie The Toiler/ Van Swaggers. But to launch this new format, some strips that were specifically configured for a tabloid size were added, like Rose O’Neill’s Kewpies or Doctor Seuss’s Hejji. Added also was a Sunday version of Mandrake.

Duval of “The International Police” has been assassinated by an agent from “The Kingdom Of Murderers.” He’s captured, but the Police can’t get any information out of him, so it’s up to Mandrake to make him talk. He decides the best course of action would be to magically turn the killer into stone while his shadow becomes an obedient slave to Mandrake’s wishes. The shadow leads Mandrake, Lothar, the bemonocled Pierce of the International Police and Rheeta, the Panther Girl (a panther that turns into a girl when needed) to the secret kingdom, which might be in Africa.

The kingdom’s first line of defense is a small band of thugs with horses and tents waiting at what passes for a border, but they let the men leave as long as they hold Rheeta. But she scares them off by becoming a Panther, then rejoins Mandrake.

The next barrier is the land called “the Plain of Ghosts,” which is light years away from the border guards, in that it’s a huge dynamo with lights and gears and wires, sitting at the bottom of a chasm, that somehow sends up gigantic, fearsome monster images to scare off nosy trespassers. Still, no match for the great magician, who matches the foolish engineers with his own spooky images. 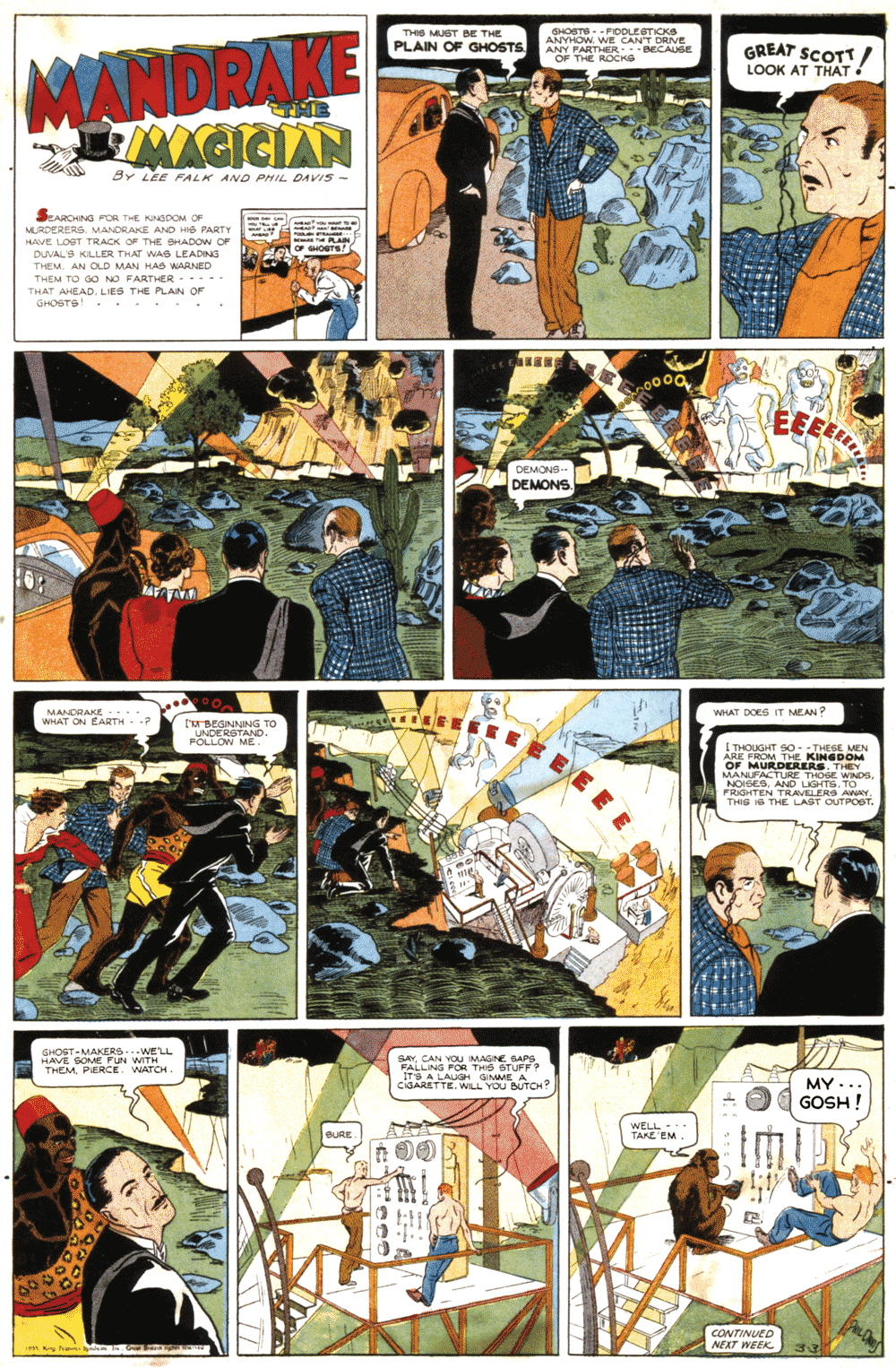 The Plain of Ghosts is not a peaceful place.

Going along further, they finally reach the dark kingdom, which is a walled, medieval castle. Inside they meet the head honcho of the place, “Bull Ganton,” who Lee describes as “Ruler of the Kingdom of Murderers , a sinister group of a million escaped convicts who plan to conquer the world.” One might think such a mission would be bound to fail, but apparently the world at large already does a pretty poor job of keeping sentenced criminals properly locked up.

Supervillain Bull Ganton models his throne room and hospitality toward strangers on Ming the Merciless.

Bull bullies the travelers, but they prove hard to handle, so he changes his tactics. Buying time, he tells Mandrake about his ingenious communications system – a million carrier pigeons that will spread the signal for the global takeover to begin among his evil followers all over the world. See what life was like before Facebook? Suddenly Mandrake falls through a trap door and is captured, and his eyes covered to render his magic powers useless. Pierce, however, has previously been turned invisible by Mandrake, and proceeds to set the birds free before Bull can blow Mandrake to bits, strapped to a chair atop a dozen sticks of TNT. In his rage over the loss of the pigeons, the guard that minded them is switched for Mandrake, and is dispatched in a nasty explosion. 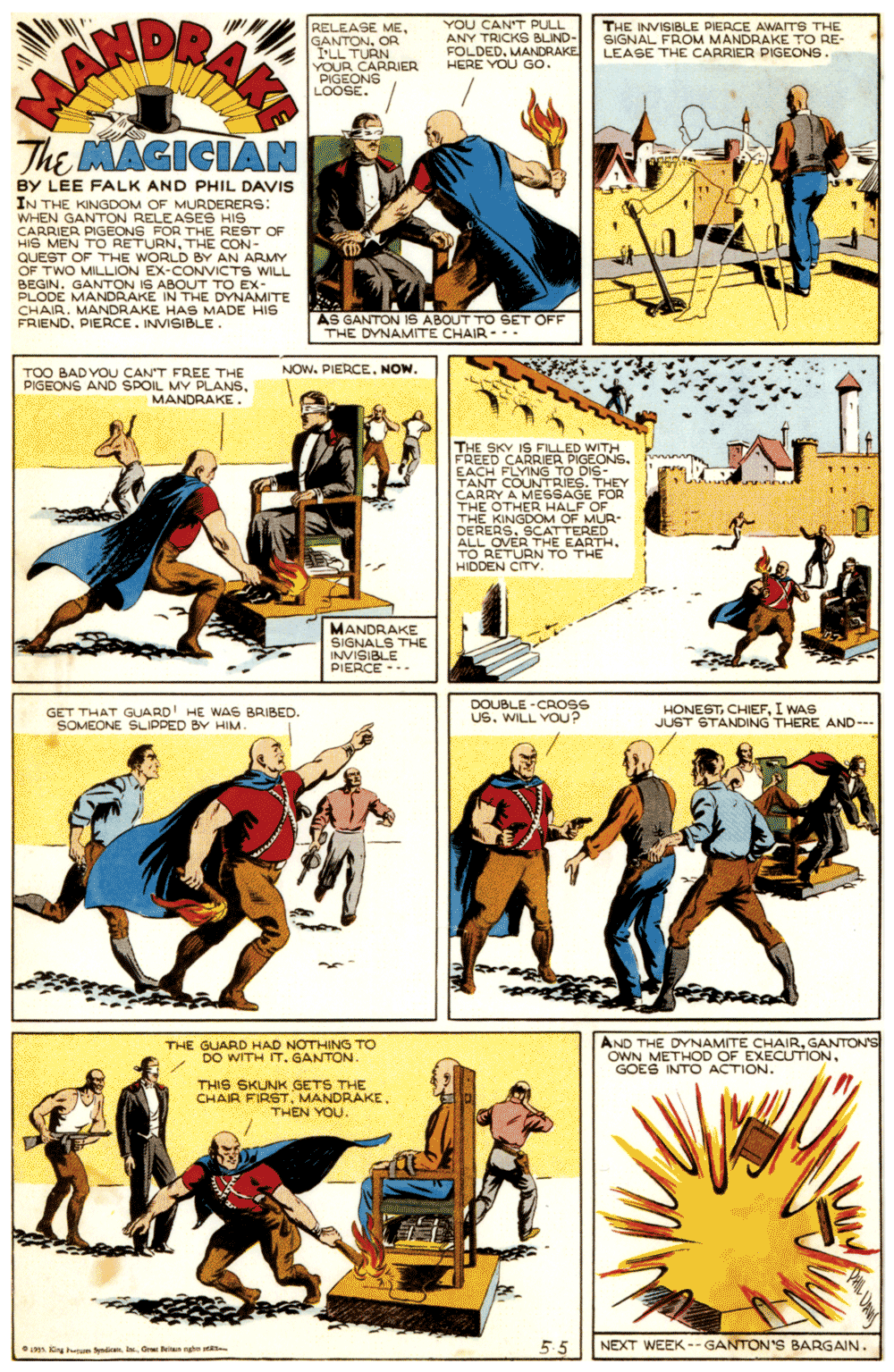 At this point the story starts to lose a lot of logic and sense:

Pierce, still invisible, rides out on horseback to get a rescue going from “The International Air Force.” At the same time, the international contingent of convicts has not only got the pigeon signals to come to the kingdom, they’re already there, streaming in by the thousands. That would make the whole transaction faster than the internet, unless all those cons were only about a hundred feet away all the time!

Now Bull’s about to give Mandrake a dynamite chair ride also, but he decides he’s willing to let him live after all if only he’ll make Rheeta come back. (Guess he forgot the trifling matter of how she turned into a giant feline and almost ripped into him.) They bring back Rheeta in Panther form, and Mandrake says he must be unblindfolded to restore her to human form, and Bull dutifully takes it off, leaving Mandrake to now go back to taking control through unrestrained magic. Meanwhile, Lothar, who has been chained up in a cell, gets a sudden “superhuman” burst of energy and tears through the hopeless guards. The “International Air Force” starts an aerial bombardment, which the Murderers can only fight back with feeble old field artillery pieces. Bull is punched out by Lothar, and the kingdom is destroyed.

Mandrake hastily reveals Rheeta wasn’t a panther at all, just a girl that the illusion could be cast upon, so dragging her through all this danger would seem a lot more risky and pointless than it first seemed.

Anyway, Pierce suddenly expresses his love for her, and Mandrake obliges by making her change her costume to a bridal gown as we duck out. I think there was something of a desperate, speeded up quality in this, almost like they had to finish it in seventeen weeks, whether it was good for the story or not. 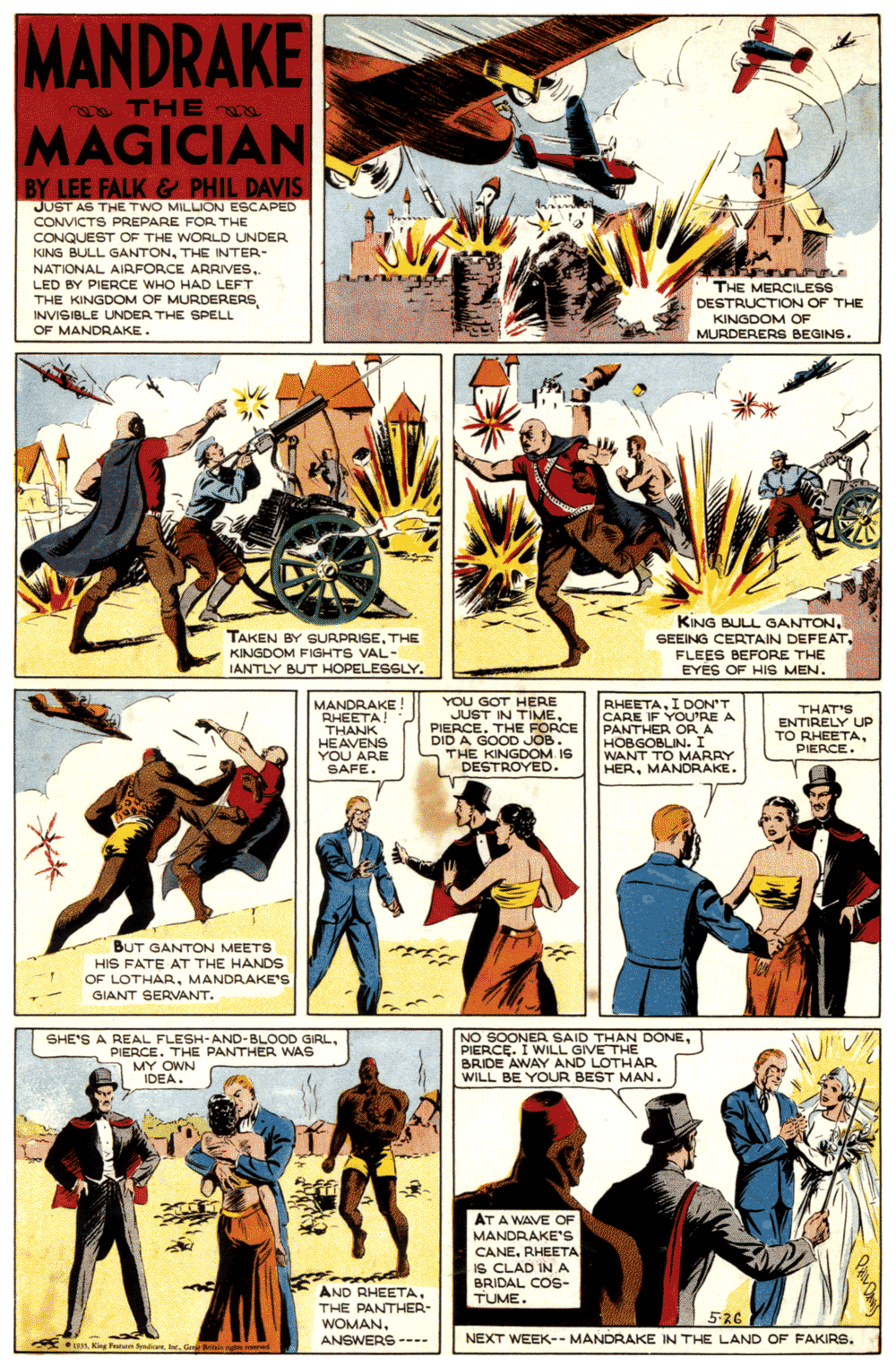 A hasty story wrap up to Mandrake’s Sunday debut story.

The tab experiment was short-lived, and most of the new titles folded up after a few months, but Mandrake stayed a Sunday favorite until 2002.

To deepseadomain, Sergio Bastidas:
Phil Davis’s style was, in the earliest days, a bit thin and undetailed, and, though bearing his signature, is often regarded as drawn by Lee Falk himself. There is a definite style change from the beginning to ending of the first story. Even in this first Sunday story, the first few weeks appear to be drawn by a different artist than the later ones, most noticeably in the difference in shading, or lack of it, which Davis was an expert at and, it would seem to me, would have put in.

To Lud Hughes:
Yes, Fred Fredricks’ 48-year tenure on Mandrake is quite impressive.

Yours,
THE KFS ARCHIVIST