Ask the Archivist: Laughs from LAFF-A-DAY

Today, in answer to Ben Marques request, we will take a fleeting glance at the best King Features’ gag panel, (there have been several) “LAFF-A-DAY.”

This was a catch-all series for gag panel cartoonists who would draw for any publications that needed them, and years ago, that meant quite a few. When the series started in the pre-TV days of 1936, America liked to read. There was everything from humor magazines full of cartoons, such as JUDGE or BALLYHOO, to a more modest amount in general interest magazines devoted to the pure pleasure of taking in a good story, including The Saturday Evening Post, Collier’s and Liberty. There was a market for gags in newspapers too, usually these panels were dropped into the odd space on the comics page or used to brighten up the monotony of the “Want Ads” section. Most syndicates had these offerings, but as we were the largest, we could attract some stellar cartoonists in the field, some of which would do comic strips at some time in their careers. The series lasted until 1998, but I will show some classics from the 1940s here. 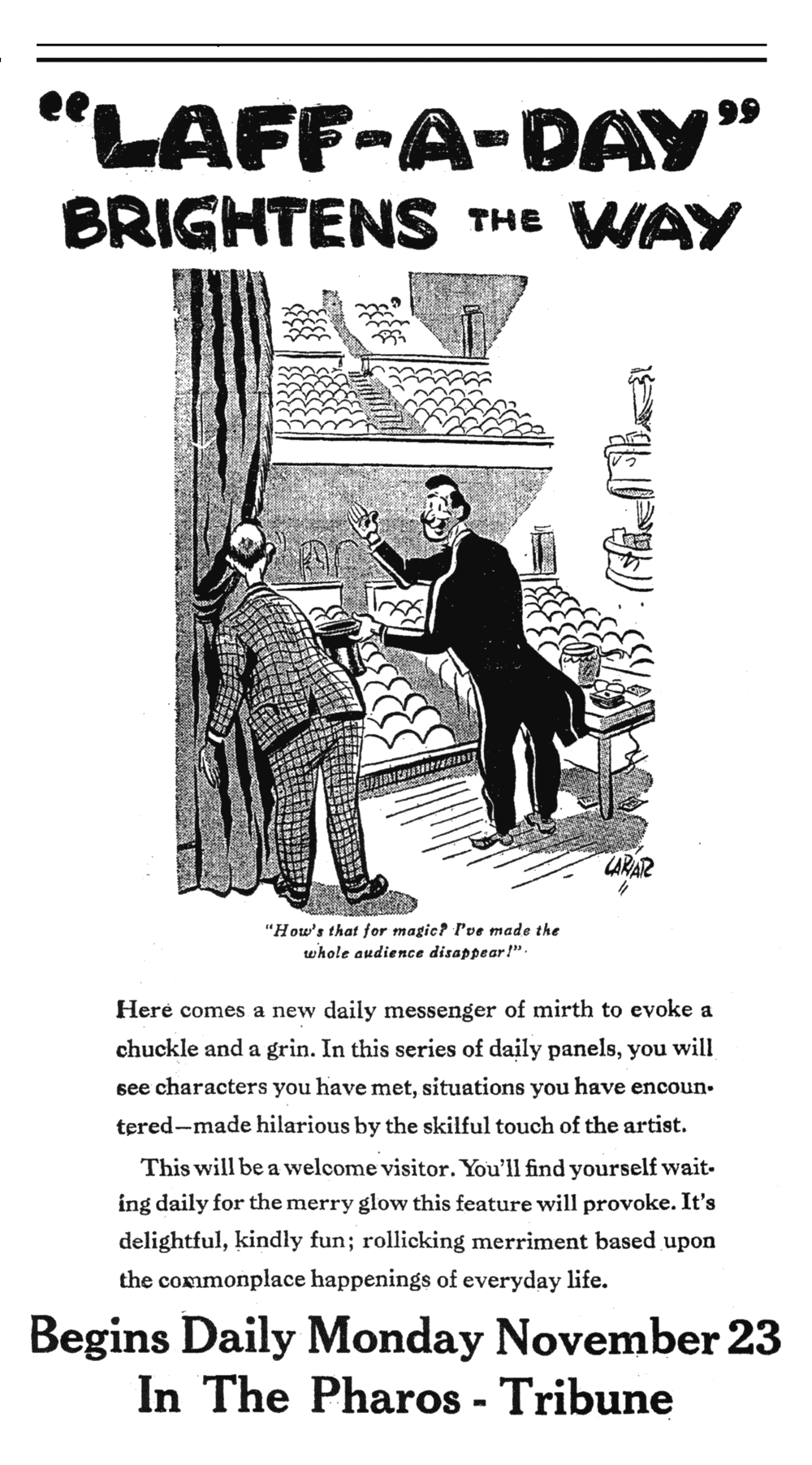 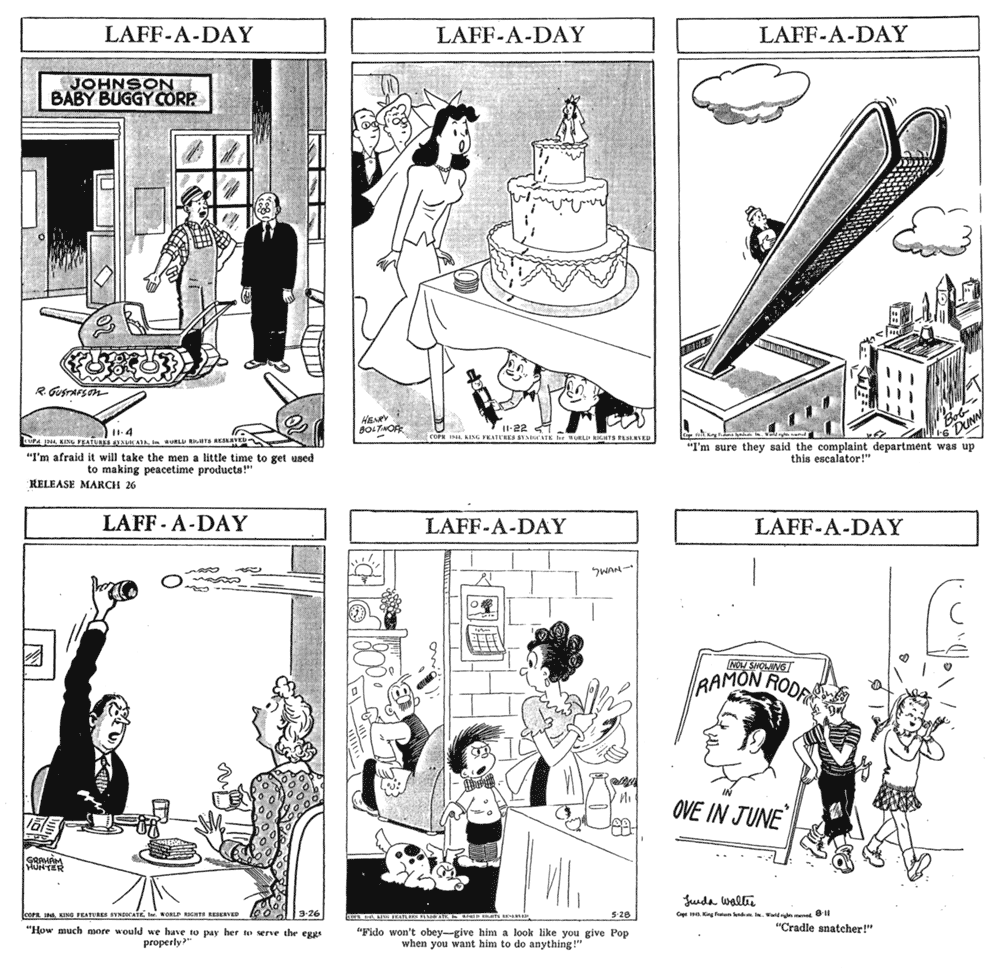 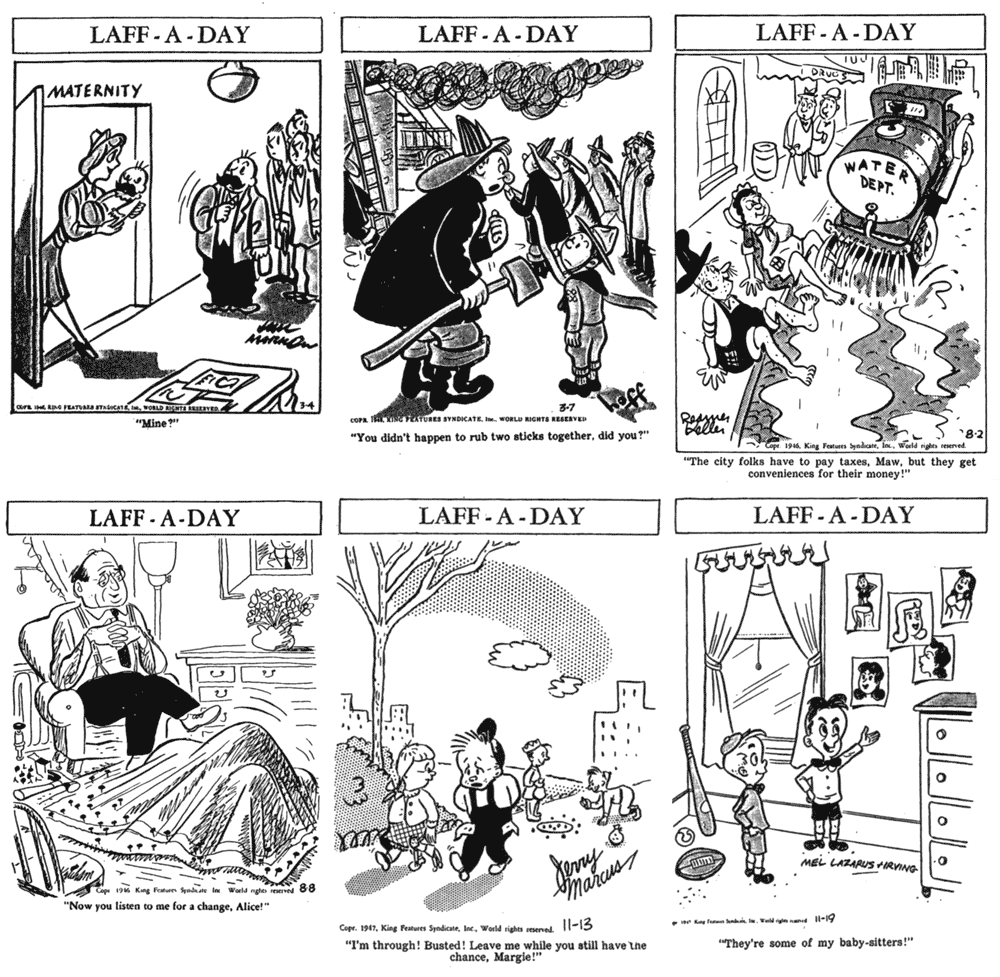 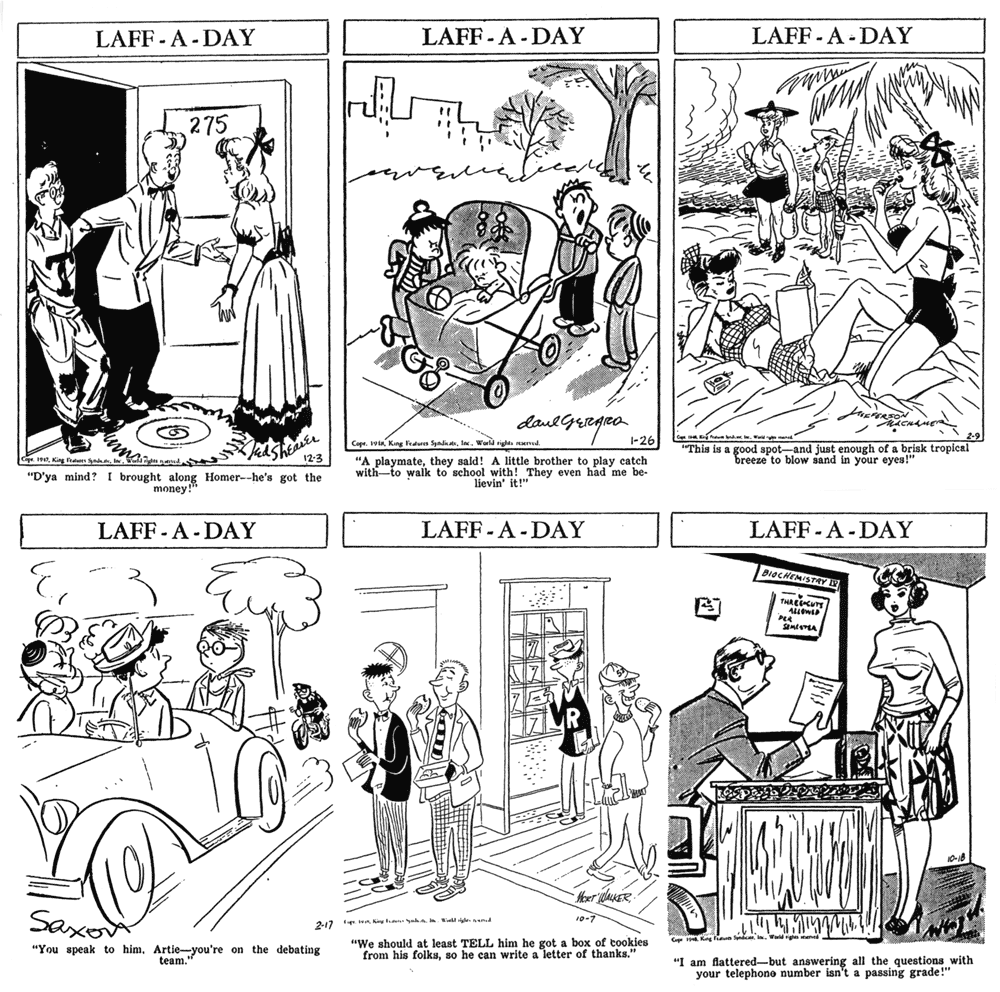 Margaret Mann, the tragic mother in the great John Ford  feature Four Sons (1928)  was a large, slow old lady with a thick Scots brogue,  played in two Our Gang shorts in  1931, Helping Grandma and Fly My Kite. But the granny, who I believe you’re thinking of that leapt out of a window, was Joy Winthrop in The First Seven Years (1930) where she (or rather, Dave Sharpe standing in for her) bounced out to defend grandson Jackie Cooper from bully Donald Haines and his father, Otto Fries.

Walt Kuhn (1877-1949) was not related to Charles Kuhn. Though he was a cartoonist, doing the FUNNY BIRDS panel series for Life in 1912 and the WHISK Sunday strip for the Pulitzer organization before that in 1909-10, he’s far more famous as an impressionist painter of that era.

Always trying for something interesting. Thanks.

Two of the Sundays offered last week have the color-in panel, so print them out and you’ll have a rare second chance to finally put your Crayolas to work. Mr. Kuhn’s spirit can rest peacefully.

One of the keys to the humor in visual humor is the appearance of the protagonists. Back then, people wore nicer clothes — and age-appropriate ones at that. Grandma wears the sort of Granny uniform, a Victorian-style sack with a lace yoke. The odd chapeau she wears with the bonnet strings is part of it too. If the strip were done today, she’d be in something far less colorful. In fact I’m thinking of a 1988-90 strip called GRAMMY, where the lead wore jeans and sweats. Maybe, I’ll treat you to that sometime.