It is time for another edition of “Ask the Archivist.” This week’s entry is in response to fan Ray Warner, who asked to see a little more on this title. That being GRANDMA. 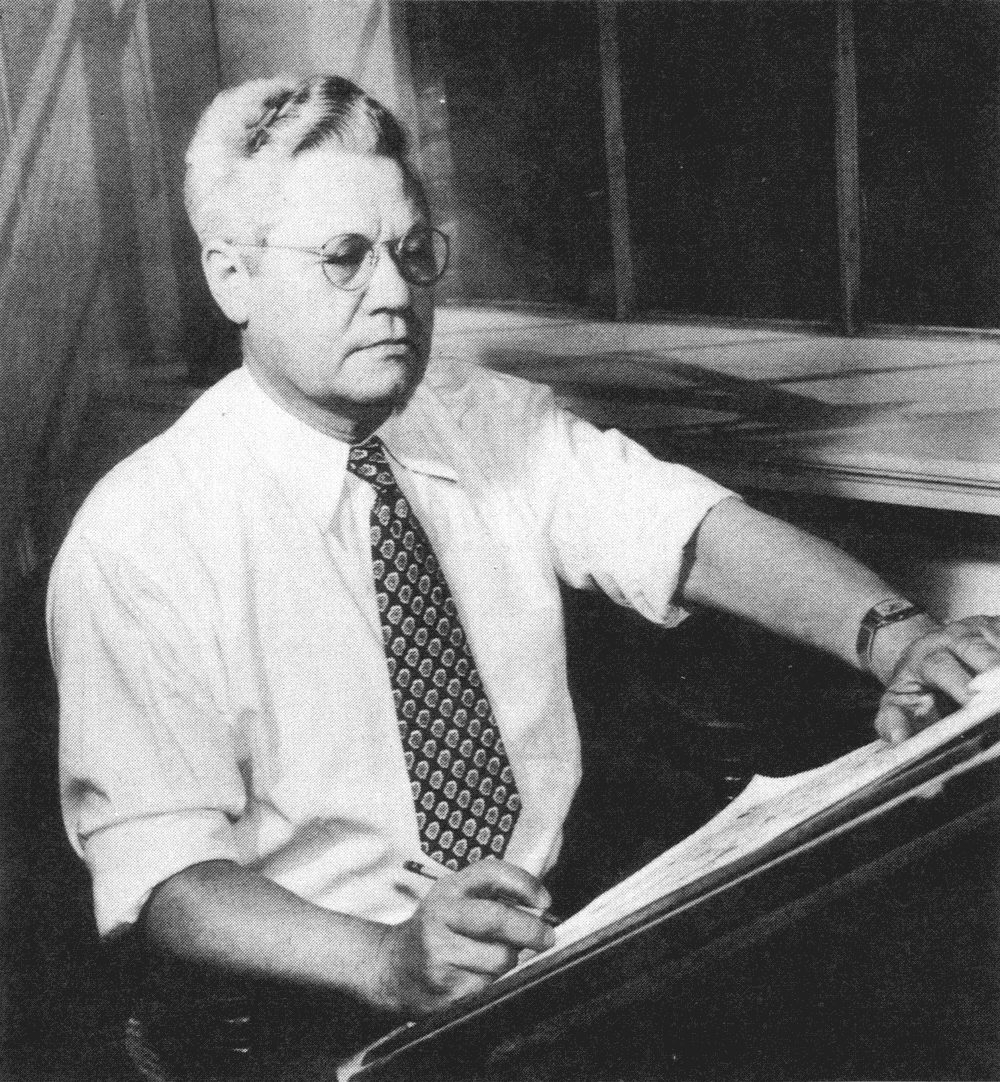 Kuhn was at one time the editorial cartoonist for the Rocky Mountain News, The Indianapolis News and The Chicago Tribune before he created Grandma.  Originally he had syndicated with the tiny “Richardson Feature Service” starting 14 April 1947, and would be usually seen joining the Western Newspaper Union’s line up for small town papers, usually weeklies. ( W.N.U. offered Reprints of Grandma’s  short stint there were running as late as 1959.)

The feature was popular enough to hit the big time with King Features starting 28 June 1948, with a Sunday added 20 November 1949.

Grandma never had an actual surname, or was anyone’s actual grandmother. We never see anyone related to her , and she lives alone. The name “Grandma” is an honorary one from the kids in the town, though everyone, including the adult neighbors, storekeepers and Mr.Otis, the mailman only call her “Grandma” too.

The character was supposedly a projection of Kuhn’s funny, feisty grandmother, always ready to sing and play games or wear odd costumes, but in the comic strip version, she comes off as a bit more than humorously eccentric. Her world is centered on the company of the local boys, always involved in their sports,  their movies, their toys and anything that would concern a ten year old. But more than anything else, all parties are nearly obsessed with baked goods. All motivations are cookie and cake driven. She cooks’ em, they want ‘em. They will do errands, household chores or even steal to get the tasty treats, and maybe subconsciously, they put up with her company at all to keep the supply flowing.

She lets them get away with their often thoughtless treatment perhaps out of loneliness, which would make sense , or maybe because she’s pretty much a simpleton, as can be seen in her daily adventures. 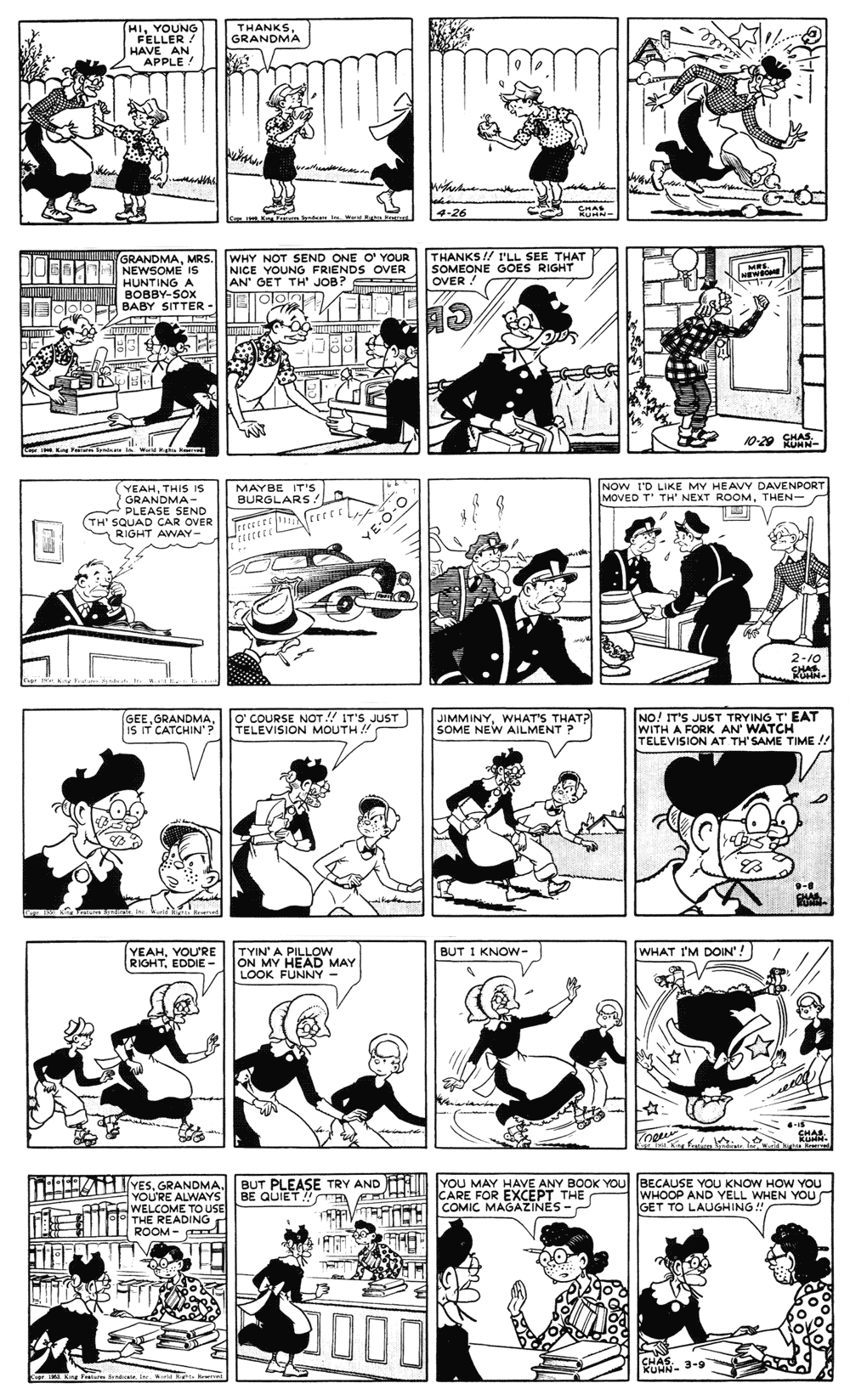 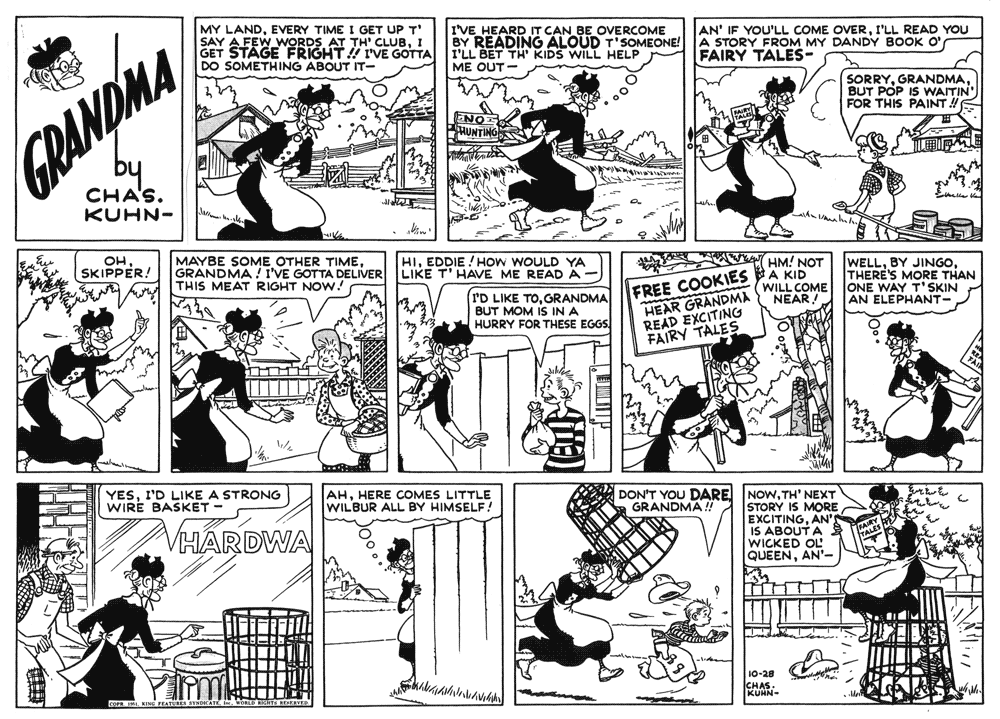 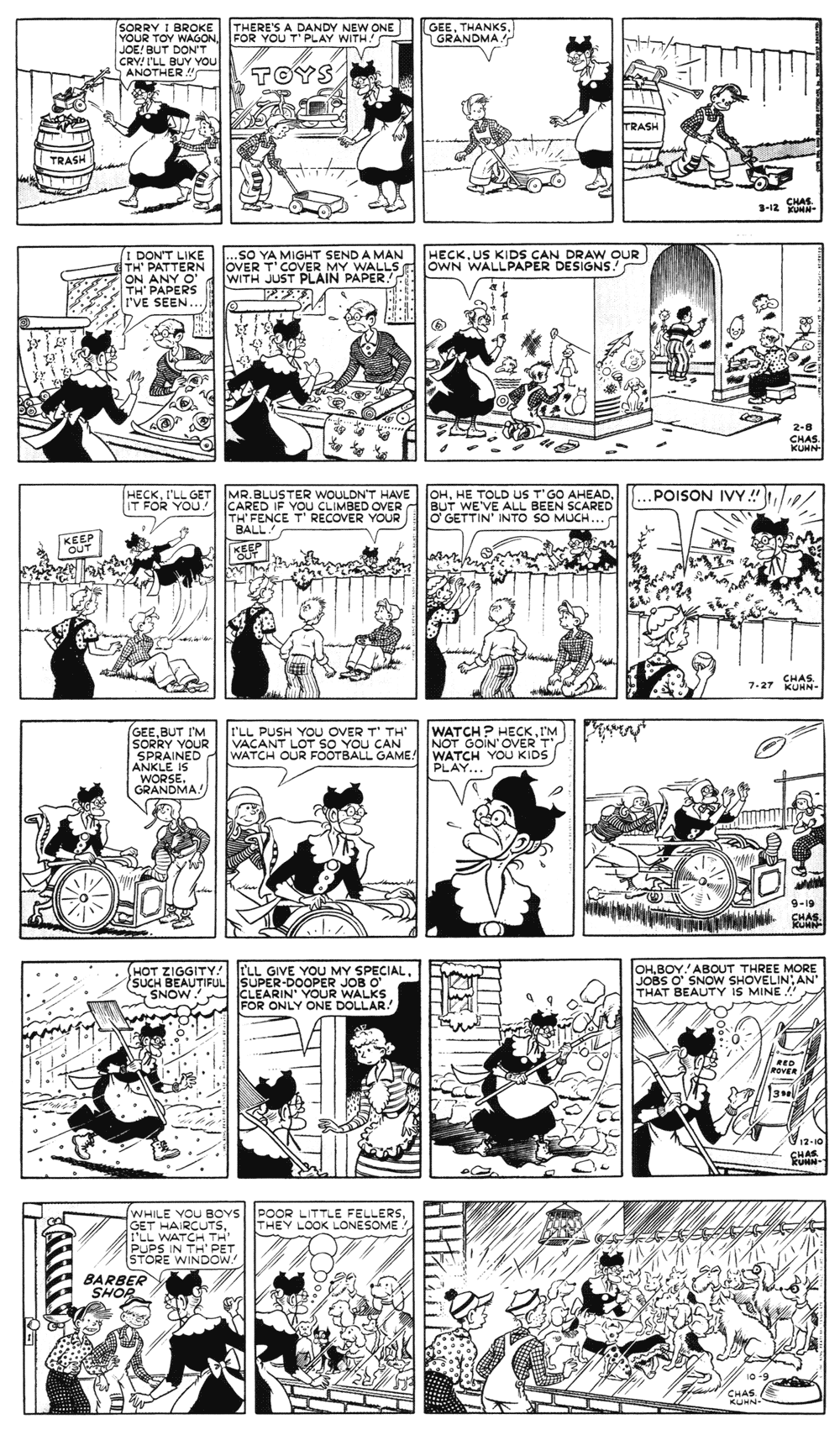 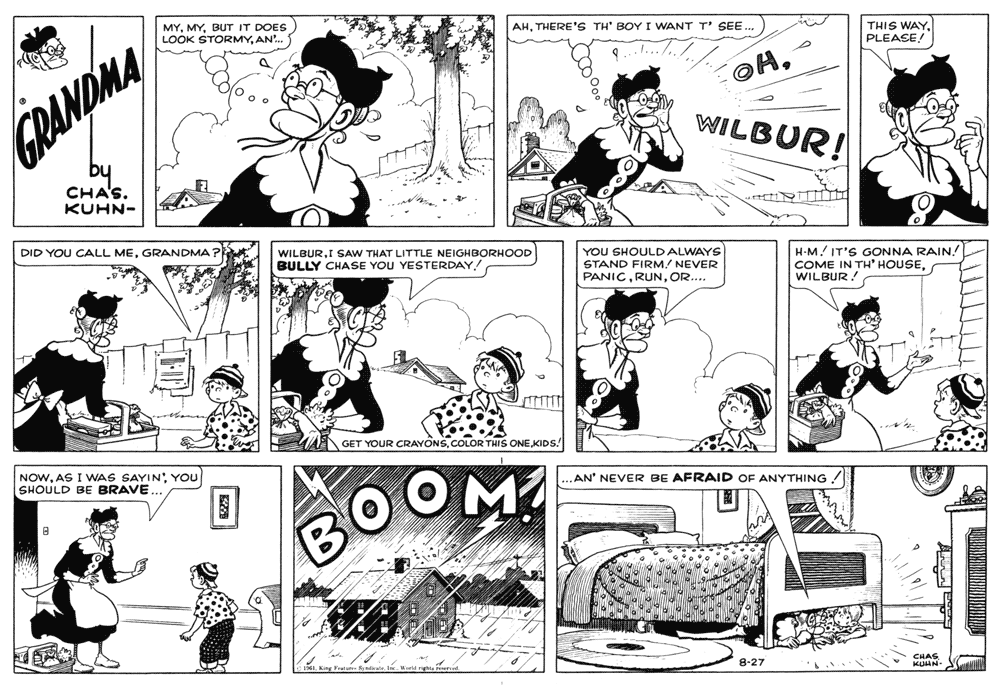 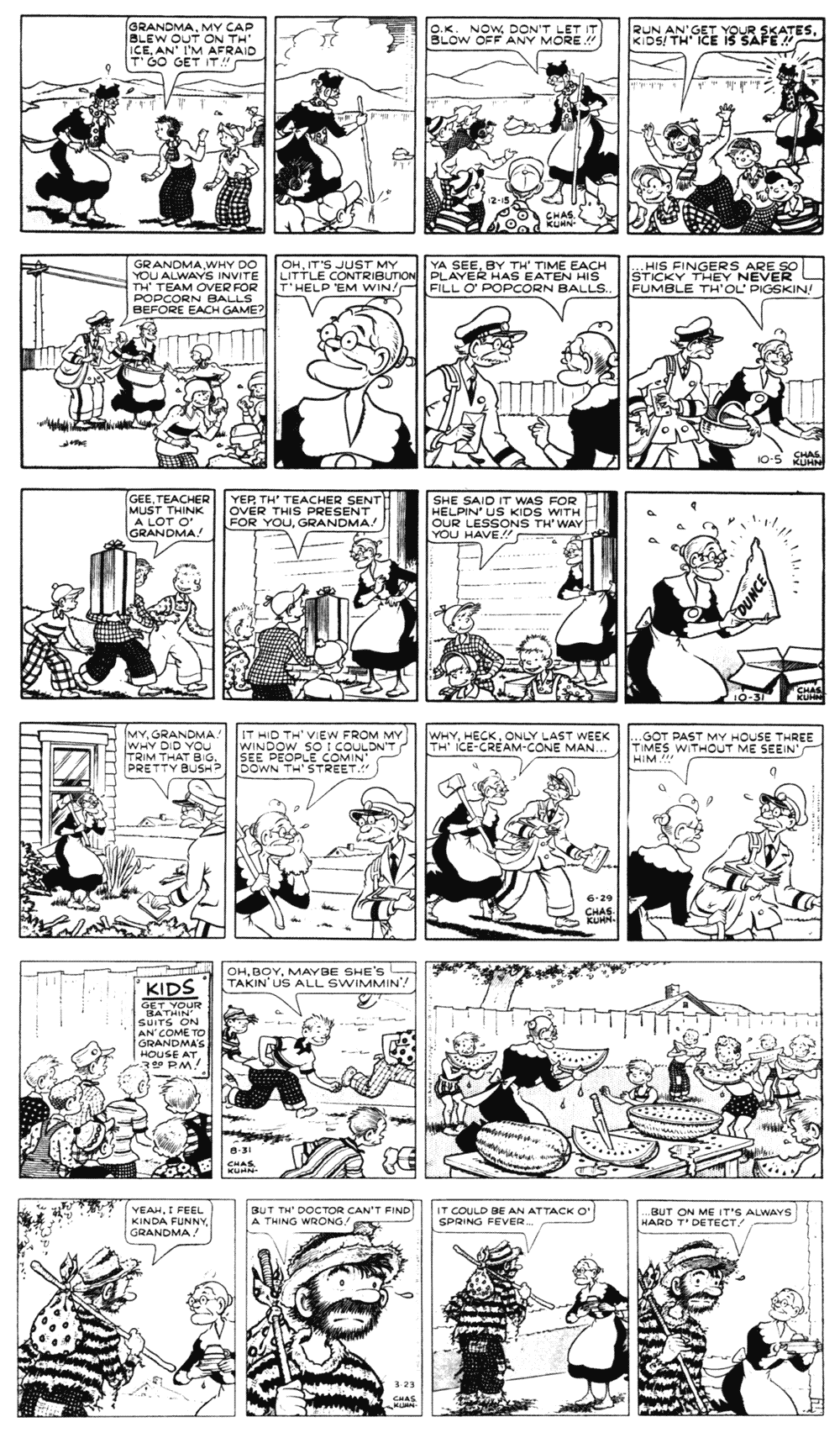 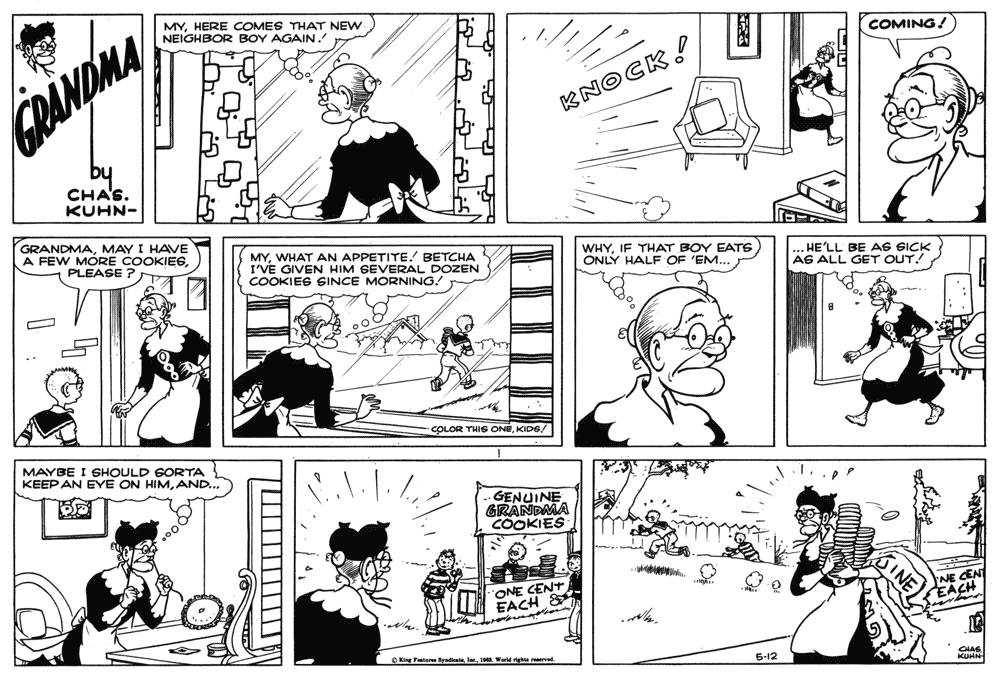 In 1964, to modernize it a bit, a young family was added, a couple named Joy and Roy, their son Leroy and daughter Butch. Adolescent boys Zip and Lag, the Trotter twins joined the cast for the strips last months in 1968. 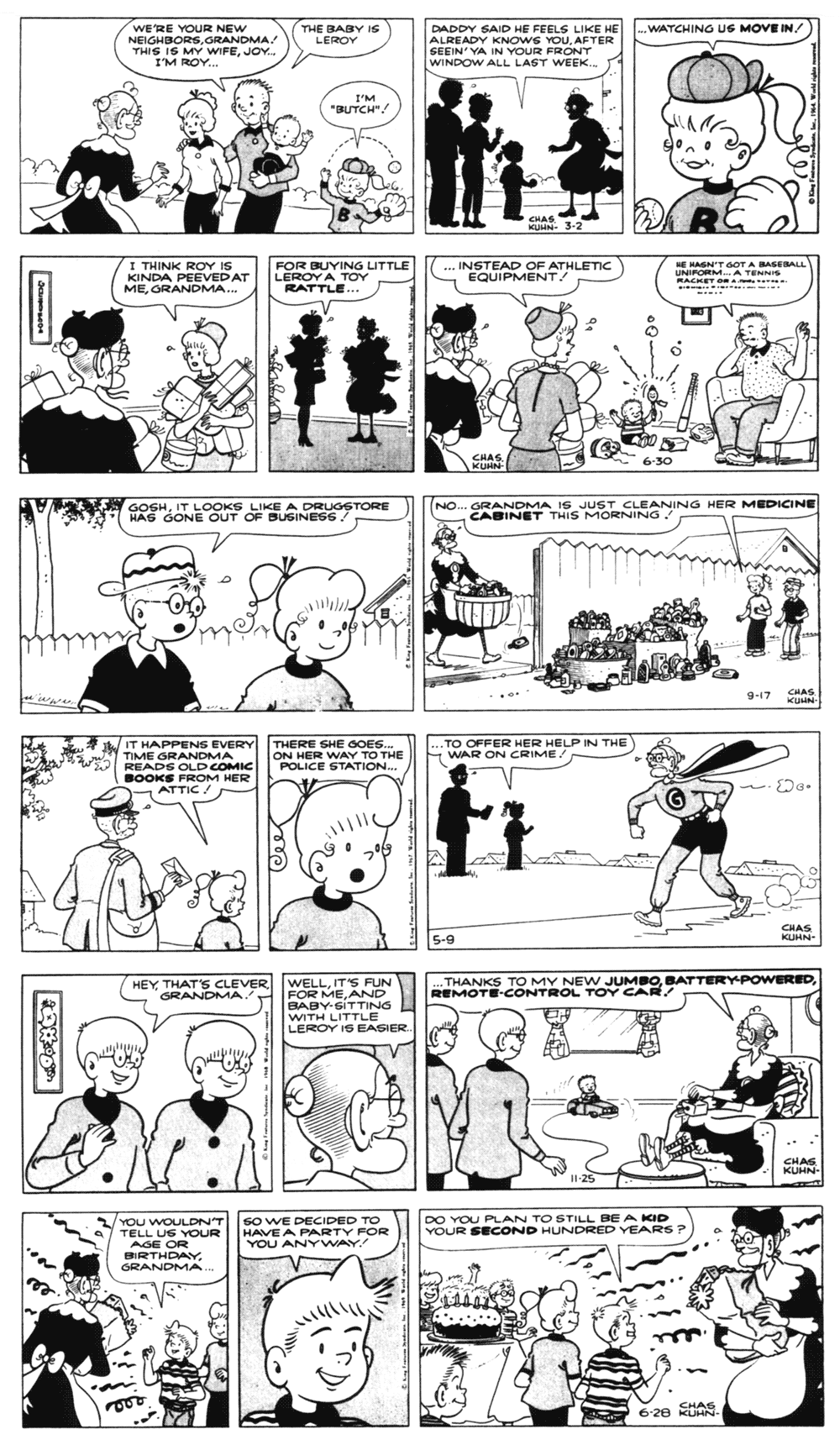 After a contract with King Features that lasted exactly twenty-one years, The series ended on 28 June 1969, and Kuhn lived out his long life in Florida twenty years later.

Here are this week’s replies to last week’s comments:

GRANDMA, as we see above, was perhaps not the cutest cartoon character ever, but I think Kuhn was definitely a gifted artist. His editorials were interesting and he could be an expert draftsman. The really limited world she inhabits never gave him many chances to show what he could do, though. The humor, on the other hand, was more on the cruel side rather than insipid, which considering the subject matter, it might easily have become.

As far as Colonel Potterby and the Duchess, I have a lot of those. We’ll see them soon.

I would like to think that someone like Charles McManus, with such limited capabilities, would never be good enough to do strips today, but I also hope to find gold doubloons in my backyard someday.