In keeping with this centennial year of BRINGING UP FATHER, I thought we might take a little time to look at another of the McManus clan: George’s brother, Charles.  He is an obscure figure now, but surprisingly he was a successful cartoonist in his own right.

Now I can tell by that perplexed look on your attractive young faces that you wonder why this would be so surprising, especially considering that George McManus was probably the most famous strip author in the world for many years in the early-to-mid 20th century. But the fact is, Charlie was a bad cartoonist, and probably wouldn’t have gotten anywhere but for his brother’s name.

There is a theory that talent is something present in one’s genes, and a particular specialty will be spread among a family. There is certainly evidence to back this up in the cartooning world. Take Gus and Rudolph Dirks, Al and Elliot Caplin, Chic and Lyman Young, or Sy and Dan Barry. Then, there’s  Charles W. McManus (1880-1941), who supposedly started out assisting his brother, George, throughout his long career as a gag man, inker or even overall ghost writer for whatever strip was at hand.  The lack of quality in the strips that he put his own name on could make one believe he was not all that useful. Nevertheless, after many years, Charlie felt ready to go out on his own and created a smart-alecky little girl named DOROTHY DARNIT.  This daily launched on  April 14, 1919, was syndicated by the Bell Syndicate and sold in numbered lots. (I rarely like to show non-Hearst strips, but these are entirely in the public domain, so I can get away with it. Also, it has some historical significance as it is regarded by some fans and historians as among the worst comic strips ever.) 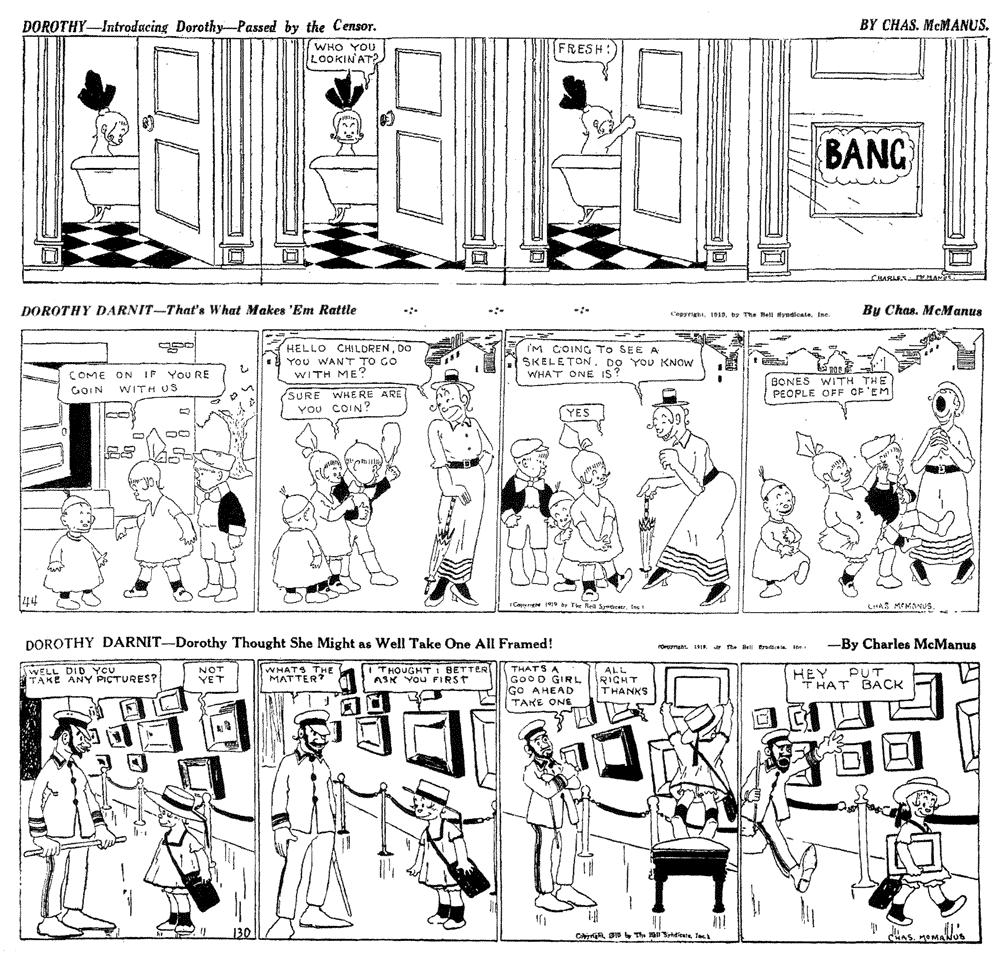 Some 1919 samples of DOROTHY DARNIT.

Miss Darnit’s adventures were marked by what would become the hallmarks of Charles’s style: poorly designed characters and backgrounds that might change oddly from one panel to another, with only a casual need to keep the characters level and lapses in perspective that only M. C. Escher could love, and a bad/weird selection of comedy material. These could be the most ancient  vaudeville throwaways, but he would artlessly stretch a one question/one answer gag into four panels, or they might be so obtuse that you wonder if they were gags at all. A strange strip, to be sure, but against all odds, a popular one. Perhaps Bell Syndicate charged bargain rates, or maybe editors felt the reflected glow of the McManus surname? Even though new episodes stopped being produced in the mid 1920’s, DOROTHY DARNIT was recycled over and over in smaller papers, seen as late as 1938.  A second Bell title was created by Charles in 1921. It was called MR. BROAD OF WALL STREET and featured the story of a ne’e-do-well stock broker, but it didn’t do anywhere near as well as Dorothy, and even a desperate name change only four months into its run (to FREDDIE THE FINANCIER) didn’t help. It stopped production in 1923, but it too went on to a half-life of many years in reruns, sometimes even combined with the stock of DOROTHY DARNIT.

In 1923, a chance to move up to the big time came for Charles when King Features wanted a revival of George’s old series, THE NEWLYWEDS.  It had once been a daily and Sunday when McManus worked for Pulitzer from 1904 to 1912. When he came over to Hearst, the daily was dropped.  THE NEWLYWEDS and THE NEWLYWEDS AND THEIR BABY were what the series was known as in its earlier version, and THEIR ONLY CHILD at Hearst, as the Pulitzer organization kept the original to go with their competing version.  In 1916, George had had enough and went on to concentrate on BRINGING UP FATHER. Seven years later, the original THE NEWLYWEDS name was available again and King Features thought readers would welcome them back as a daily series. 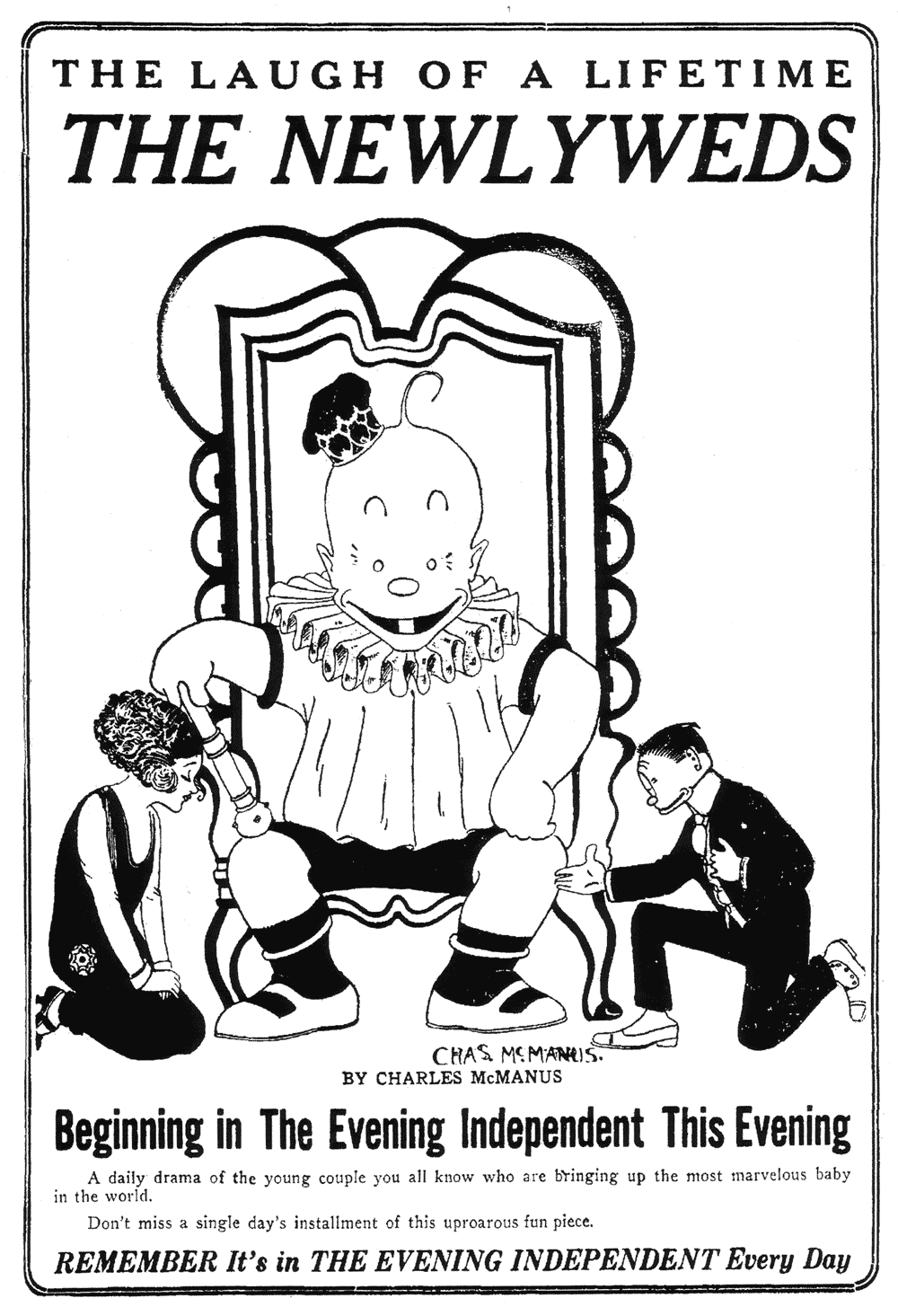 The new THE NEWLYWEDS seemed better done than Charlie’s previous works, and it may be that George could have done a bit of supervising. It is obvious there is a lot of tracing ten year old art, sometimes taking an old Sunday and making the three or four tiers into three or four daily strips, whether they made a gag or not. 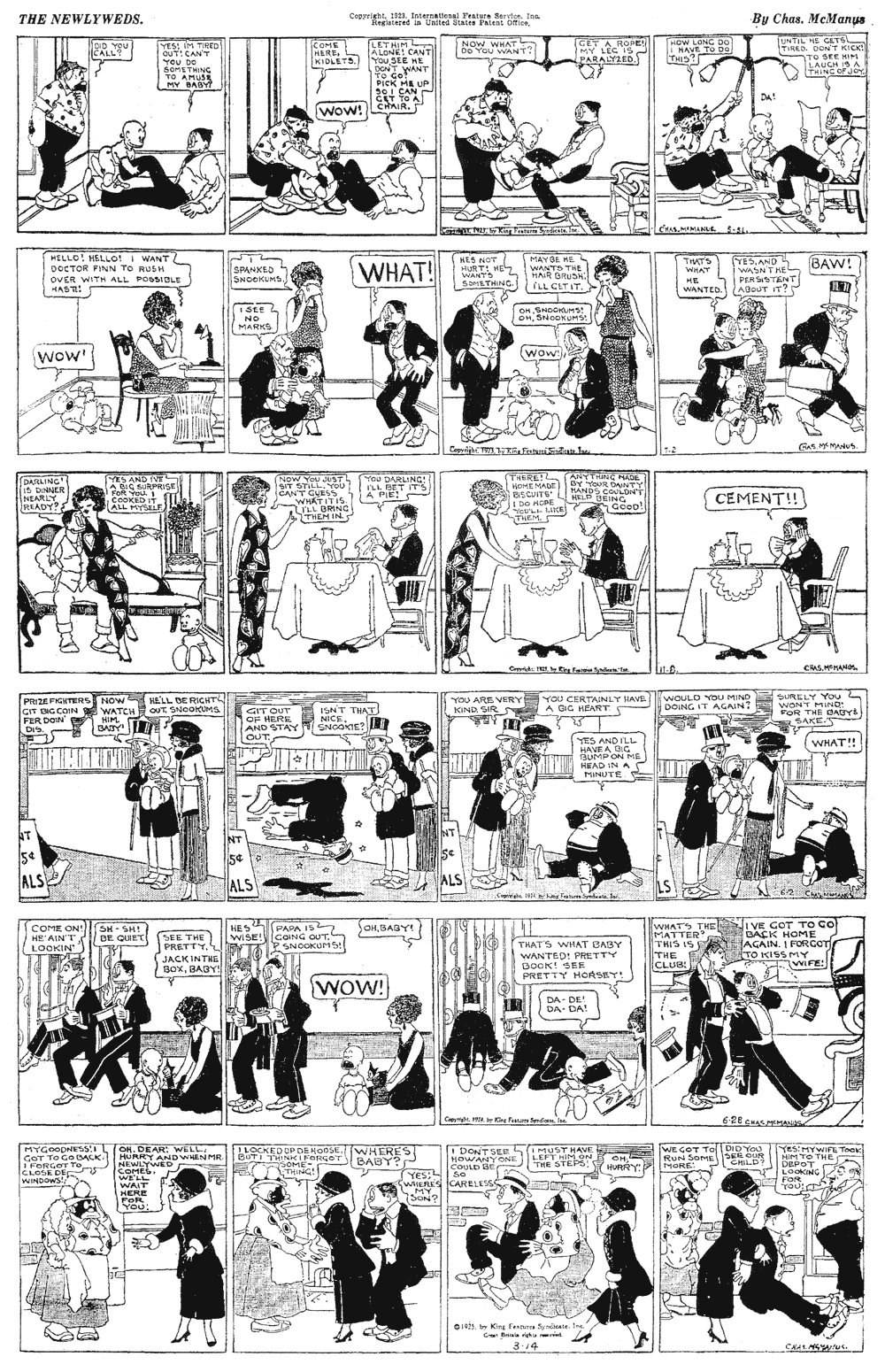 There is a fairly consistent phenomena I have observed in comics history—nobody likes a revival, certainly not by a cartoonist that didn’t create it. I don’t mean a strip continued by another man, I mean a strip that ends and starts again. This was tried with LITTLE NEMO, TERRY AND THE PIRATES, POGO, etc. Not many new fans appeared for the new NEWLYWEDS, and it probably wouldn’t have lasted as long as it did but for the strength of the King Features.

We gave Charlie another chance for a new title, and he came up with TINY, another little girl series.  Dorothy had been a  rural, working class hoyden, but Tiny was a small tot with lots of curly hair and a very well off family.  She lived with her widowed mother and grandfather in their Jiggs-like mansion. It looks as if it was ghosted by George. For the most part, Tiny being a stock character type often seen in BRINGING UP FATHER. The episodes done solely by Charlie are obvious, as he reverted back to his Dorothy-style gags and art. It ran from March 14, 1927 to  August 1, 1928. After that, Charles just seems to have retired, or went back to doing errands for George. 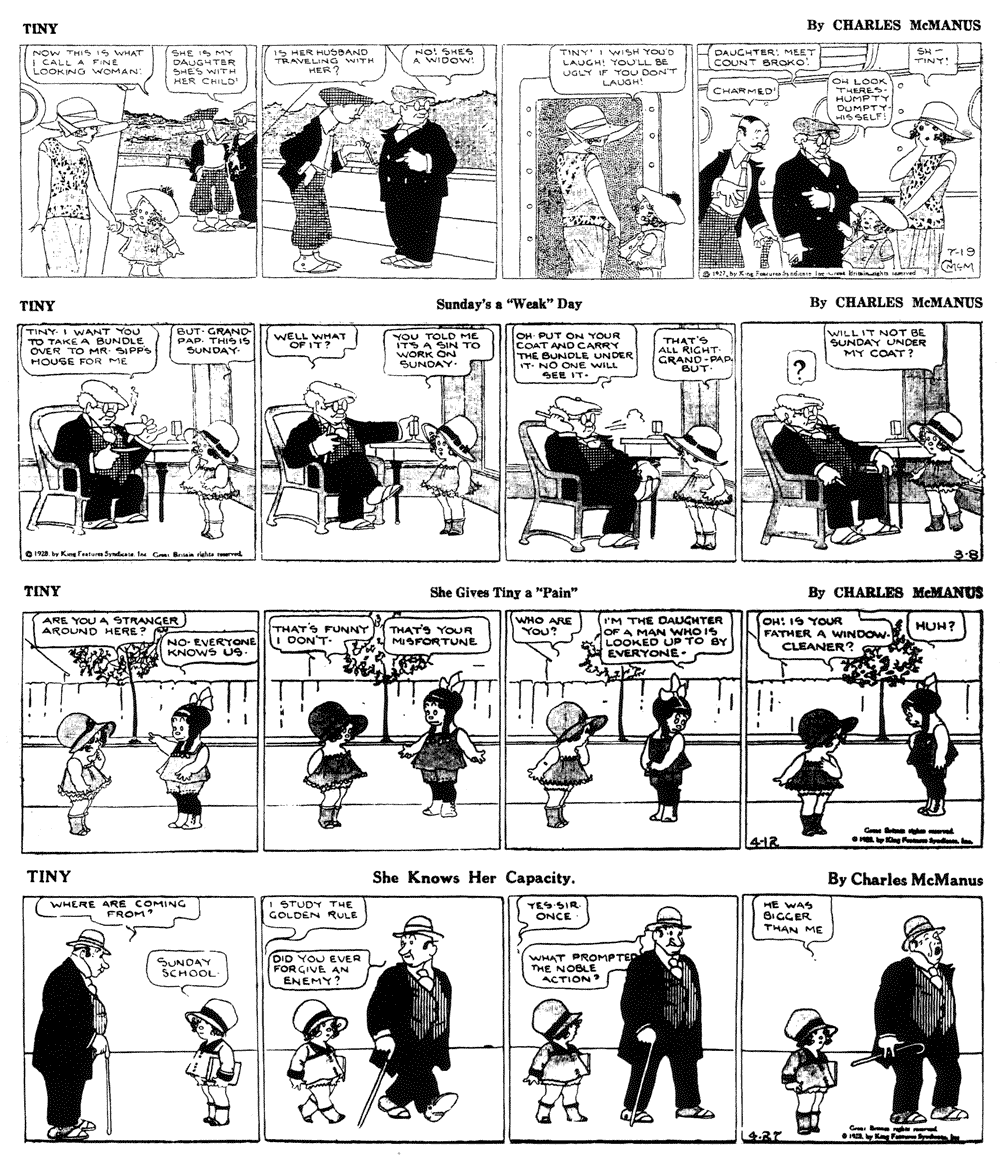 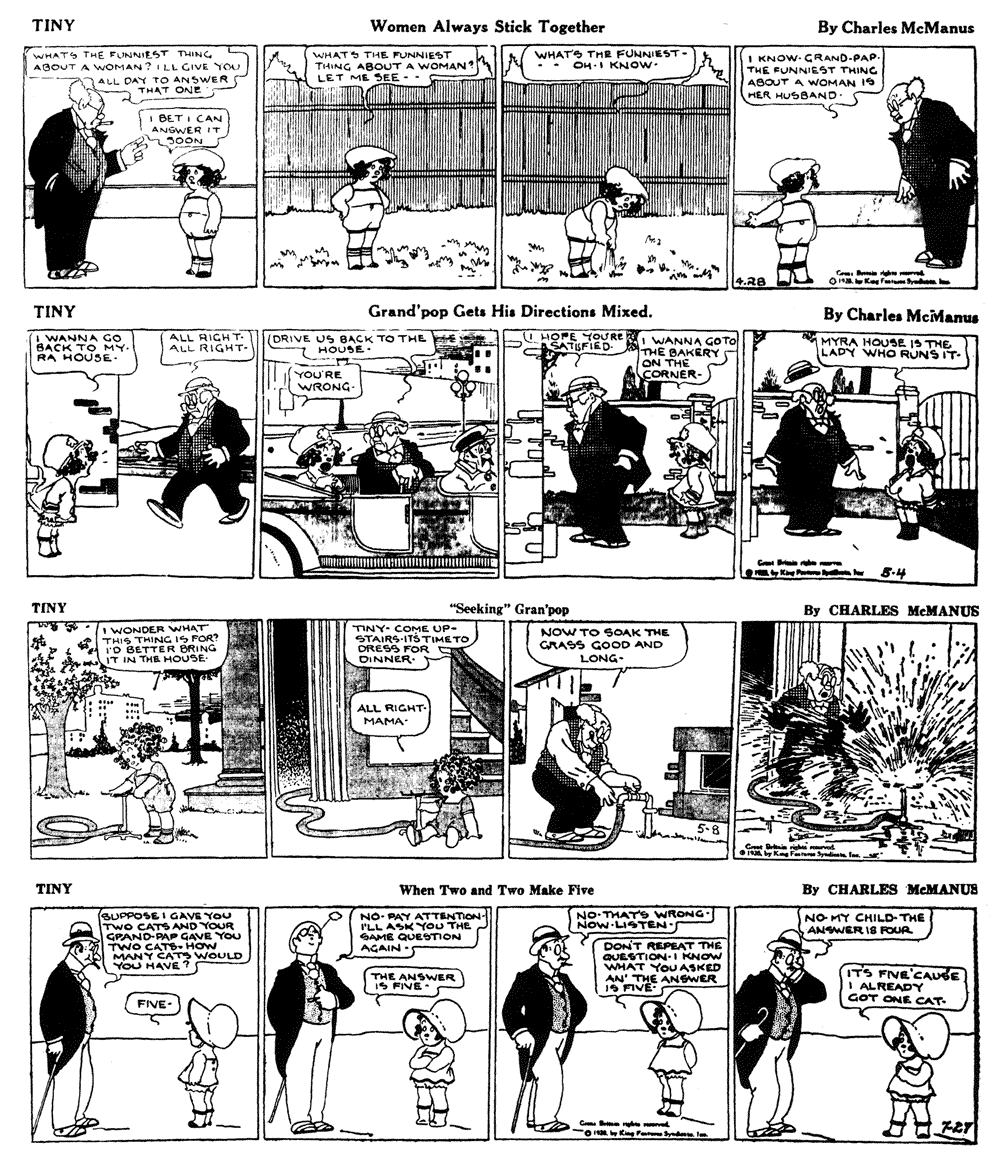 So much for hereditary genius!

Moving on to reader comments:

I think a lot of cartoonists, especially of editorial cartoons, have a MacNelly-like style. But, I think that he, in turn, shows influence of who was the hot new talent when MacNelly was growing up and in school, (and also a Pulitzer recipient) Pat Oliphant.

Many strips that carry on after their creator passes away show no effort to maintain the style and leaves it much poorer for the effort. I’m sure that you can think of many examples. (I’ll get in trouble if I name some here). SHOE has been able to thrive because they are true to MacNelly’s vision.

Yes, I remember the strip GRANDMA when I was a kid. Actually, several people have told me that they recall it fondly. I’ll be sure to do a week on her soon.