A strip that I have liked for many years is SHOE, but it is a latecomer to King Features Syndicate. In fact, it will be only five years with us come September.

SHOE was created by Jeff MacNelly, a multi-talented penman who spent many years as a top editorial cartoonist before and during his years working on SHOE. 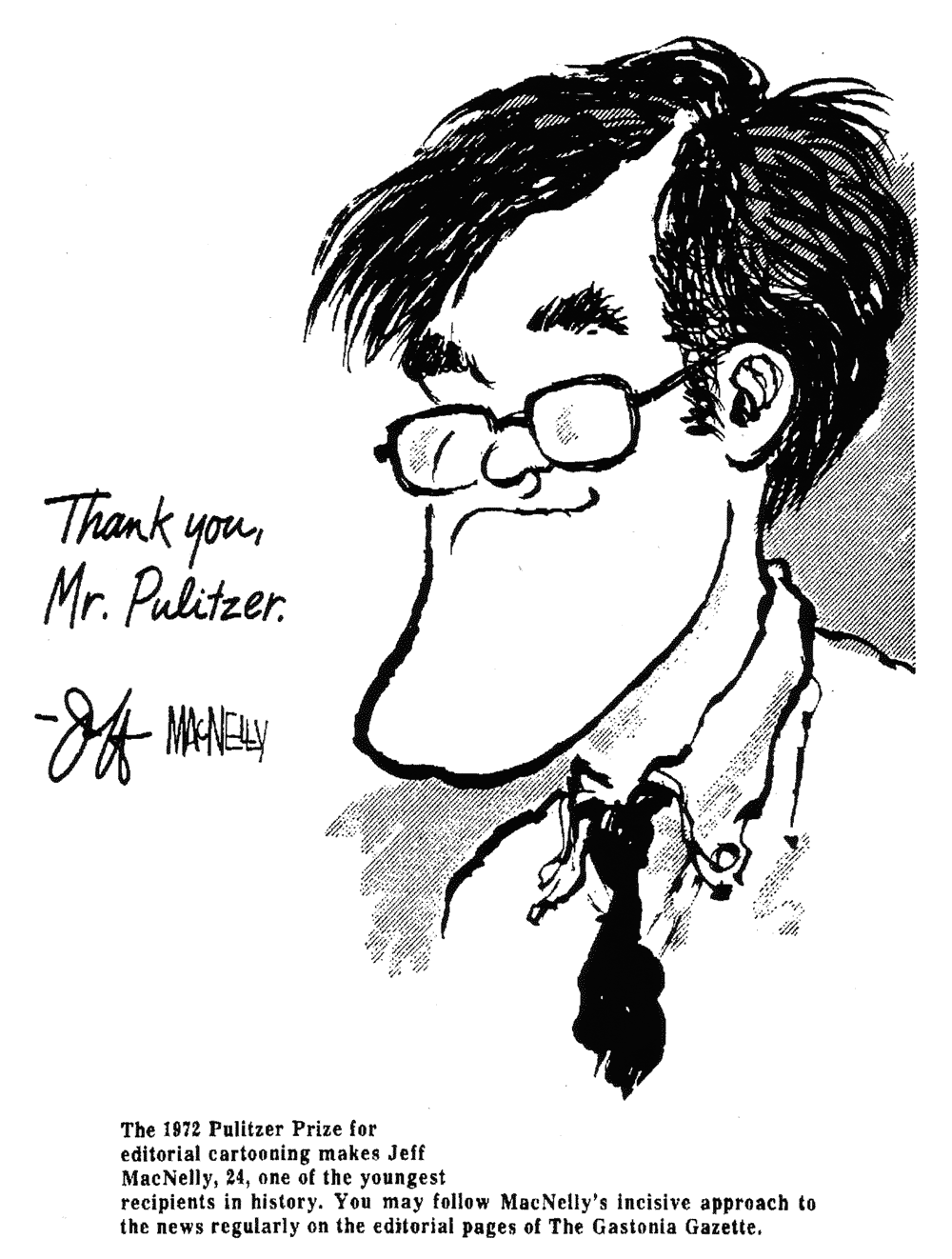 MacNelly came from a media background. His father was in advertising and was a publisher of The Saturday Evening Post in the 1960’s, and his mother was a reporter. It was only natural that he would become a newspaperman. While in school in 1968 at the University of North Carolina, MacNelly started drawing editorials: first for the Chapel Hill Weekly, and, in 1970, he joined the Richmond News-Leader. Four years later, he began syndication with the Chicago Tribune-New York News (now known as Tribune Media Services). 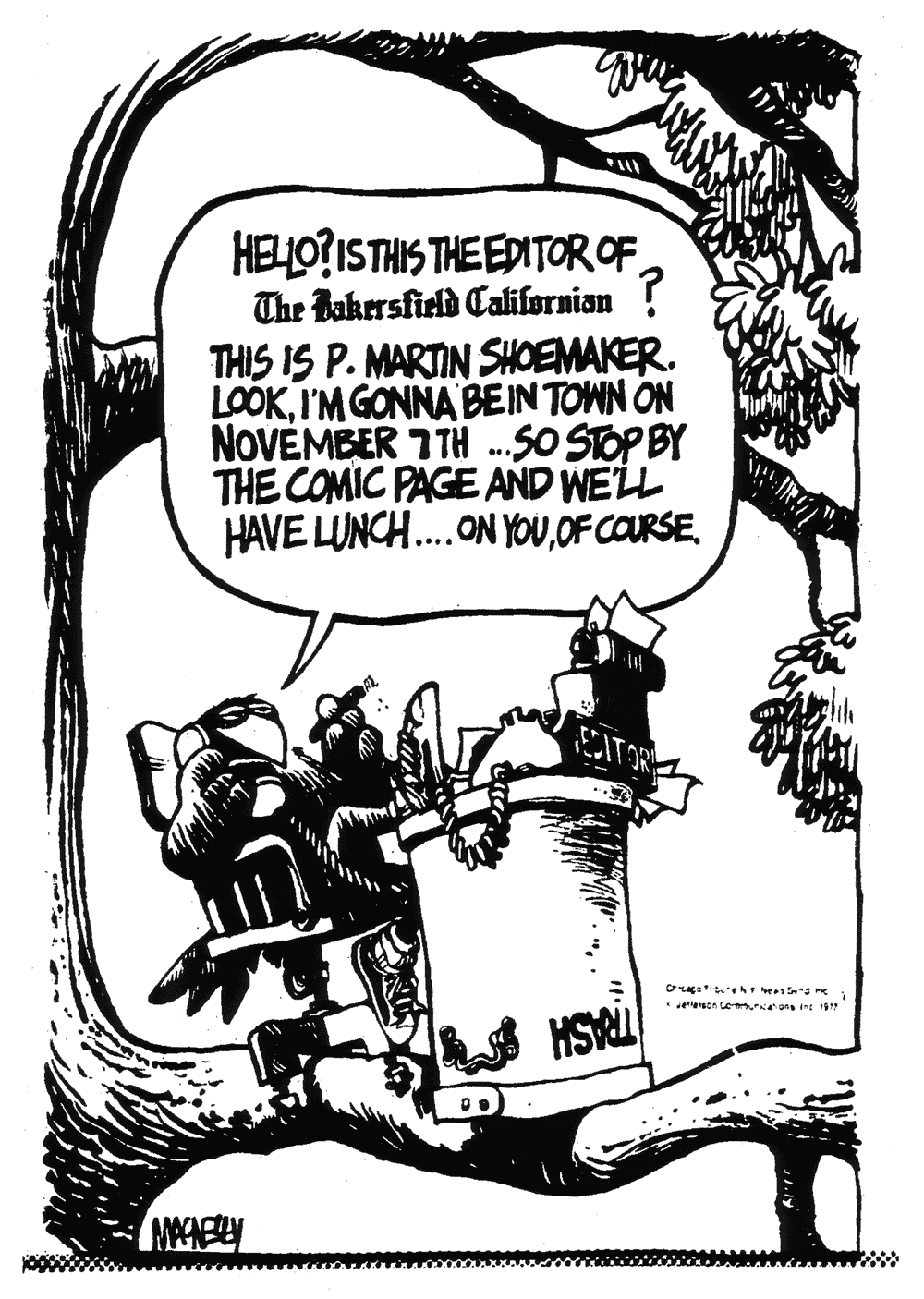 He tried his hand at a comic strip beginning in 1977, and his choice of subject was the world of newspapers, albeit on a much smaller scale than the big-city dailies with which he was familiar. This comic would be about a tiny newspaper published from a tree in the literally named town of Treetops. The inhabitants are not humans, but birds. The titular star being the publisher of The Treetops Tattler-Tribune, one P. Martin Shoemaker, who is a fat, stogie-chomping, grouchy Purple  Martin. He was inspired by MacNelly’s one-time boss, Jim Shumaker, back in Chapel Hill. The Tattler’s editor is Cosmo Fishhawk, a greying, world-weary but erudite osprey, known as “The Perfesser.” The strip debuted on September 12, 1977, and was then syndicated by the Tribune. 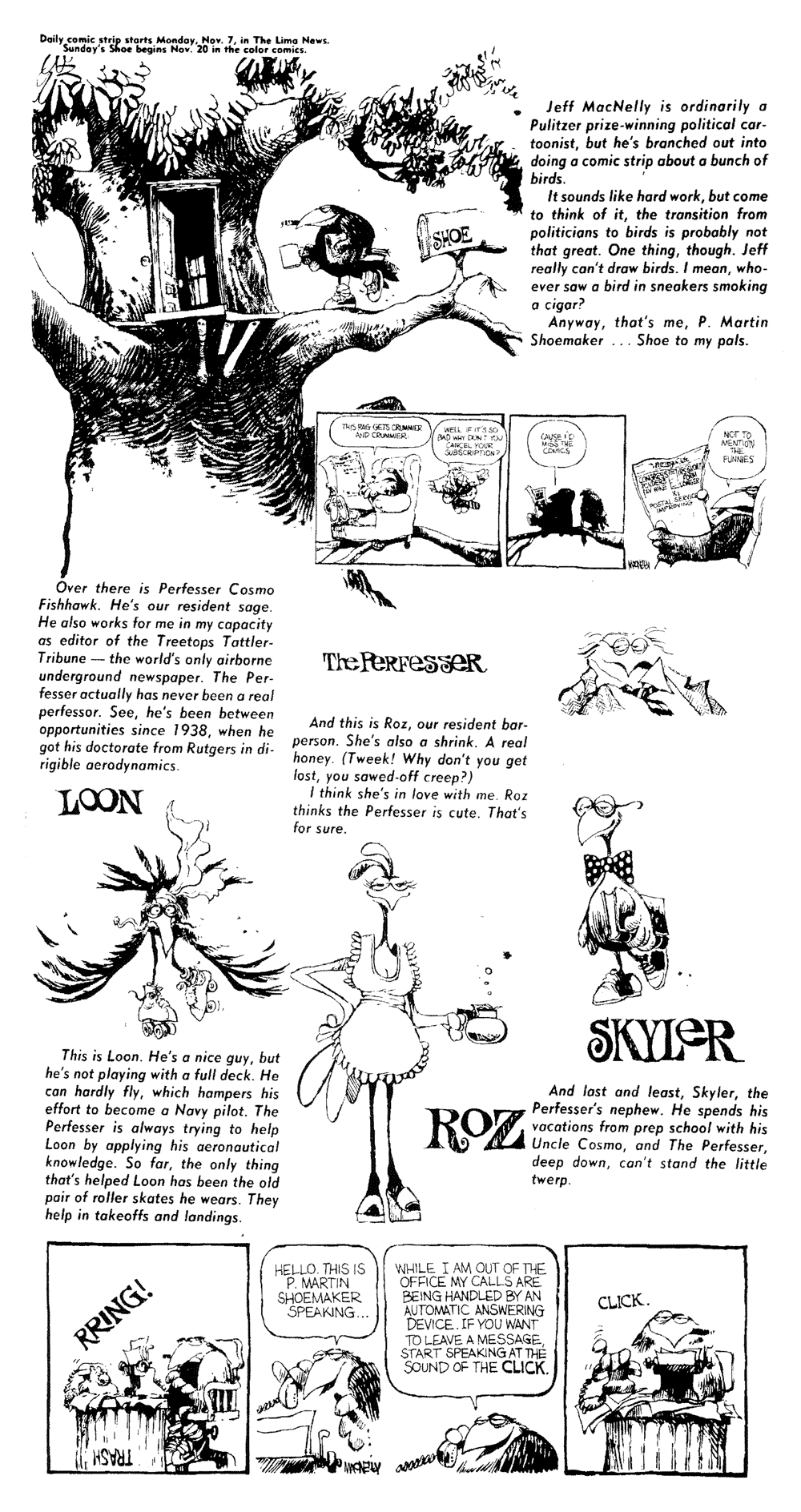 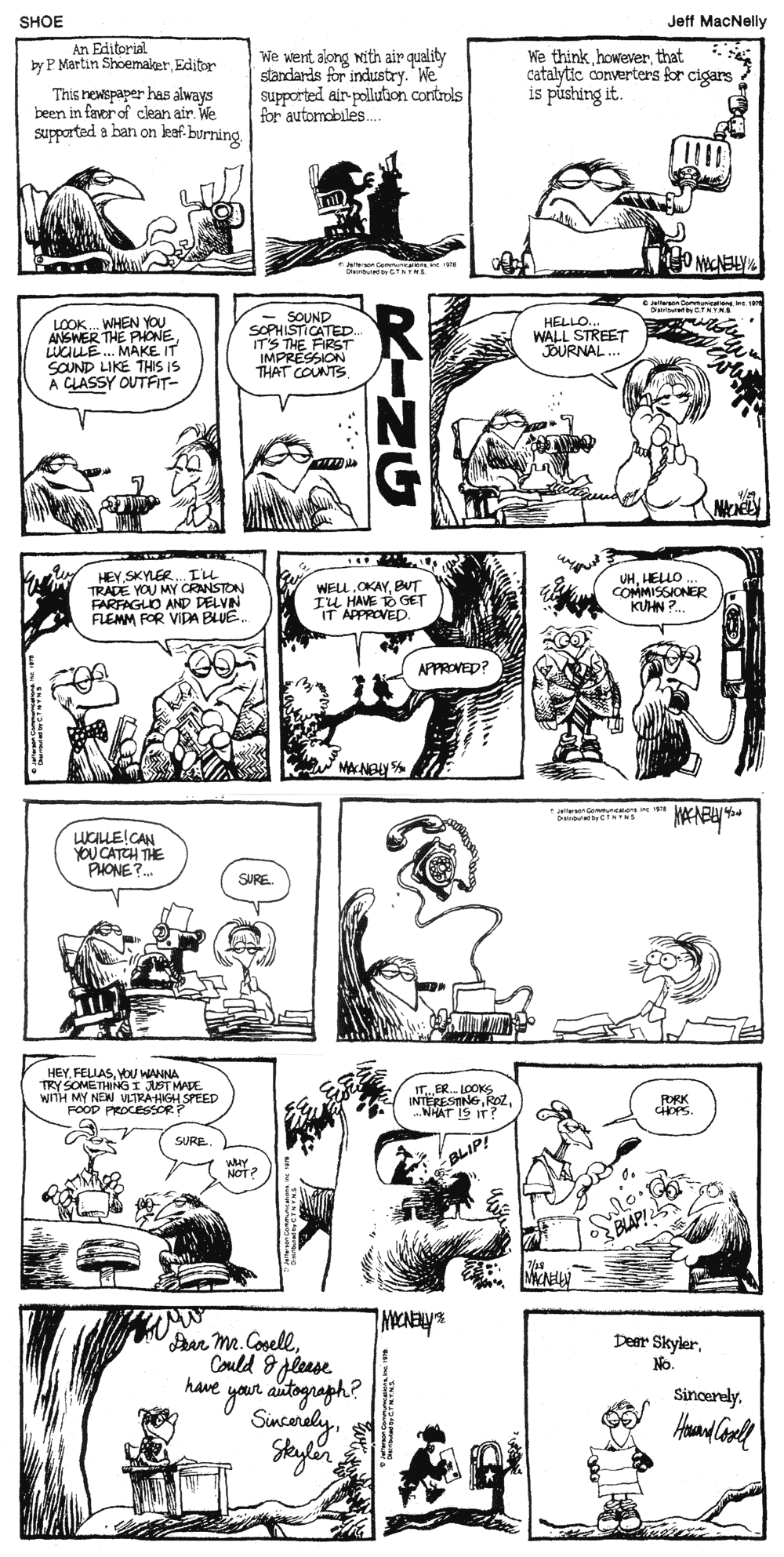 The locations were mainly The Tattler press room-branch, the Perfessor’s messy office/house and Roz’s Roost Diner, where bad food and cigarettes are always the blue plate special. Other characters include: Skyler, a know-it-all nerdy kid; and Lucille, the inept secretary. Eventually, some of MacNelly’s editorial humor would get into the strip with the addition of less than inspiring Senator Batson D. Belfrey, who was modeled after Thomas “Tip” O’Neill (D-Mass.), and one-time Speaker of the House. I include his first appearance in 1980 above. These are just some early examples. We will see more SHOE another time.

Moving on to reader comments:

King Features put out a lot of promotional items over the years, but newspapers usually favored only the special cartoon issued when we would launch a new strip.

It seems that when Herriman died, he actually left behind some penciled only strips, but these weren’t bothered with. Truth be told, KRAZY KAT was not that big a title in 1944. Most newspapers that ran it were in the chain. The licensing had dried up. For instance, the animated cartoons had ceased four years before. If it weren’t for George Herriman’s personal friendship with William Randolph Hearst, KRAZY KAT would probably have been retired some time before. In other words, it wouldn’t have been worth keeping it going. The 1951 comic book restyling was an effort to see if the memory of its’ creator had softened to the point that the property could take new forms and be popular again.

Well, God bless you, Mr. Tully! Keep eating spinach and someday you will be able to punch out Bluto too.

I have a large file of LAFF-A-DAY, so I can show some in an upcoming post.

Rest assured, Swee’ Pea is Popeye’s adopted son. He was abandoned on his doorstep 80 years ago this week. Segar originally wanted to call him “Schooner,” but fans picked “Swee’ Pea,” after Popeye’s often repeated threat to adversaries “I’ll lay ya amongst the swee’peas!,” which was referenced in the Popeye interview in 1931.

Be here next week for more fun, cartoons and surprises!