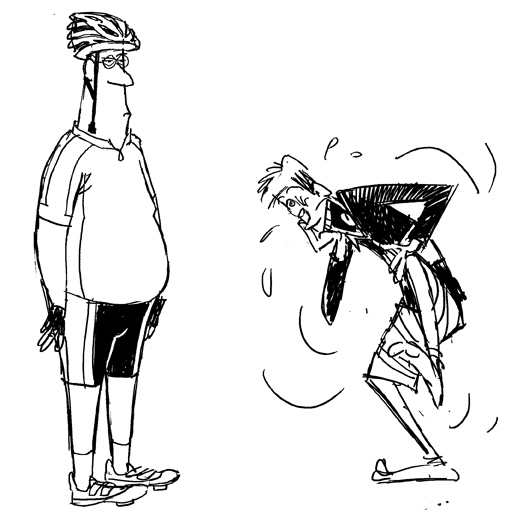 I’m a long-time lover of cycling, and as I do every July, I have my studio TV tuned to the Tour De France while I draw.  Depending on what I’m working on, I might have to watch one of the time-delayed broadcasts later in the day as I’ll find myself shouting “Allez!  Allez!” at the tube instead of coming up with an editorial cartoon.  Inking something?  Fine.  When writing, I need to dig deep and concentrate as if I were climbing Mt. Ventoux.

Le Tour also inspires me to get back in the saddle.  Cartooning can be a really sedentary occupation.  I often quip that I can out-sit anyone.  If they gave a yellow jersey for sitting, I’d be donning it on the podium in Paris every year.

So when I do get up out of the swivel chair, yank the bike out of the garage, dust off the saddle, and pull on the bib shorts, it’s apparent that all this sitting means my middle-aged self doesn’t cut a very smart figure in cycling clothes anymore.

Of course, that doesn’t stop me from going ahead and scaring the neighbors anyway.

Getting a glimpse in the mirror of me in my cycling kit recently inspired the sketch below.  I don’t see myself quite as ridiculous looking as Ed here, but I’m sure that’s just my well-worn “denial gland” kicking in again.

The sketch also inspired me to write a weeks’ worth of gags about Ed on a bike.

I’m hoping that standing in front of the mirror again in cycling shorts will act as a performance enhancing drug on my gag-writing abilities…  Allez!