It was said when George Herriman died in 1944, that the strip would be discontinued  because nobody could replicate such a unique, personal creation, but that wasn’t necessarily true, and Herriman alone hadn’t guided Krazy exclusively, either, as he had little to do with all the KRAZY KAT animated cartoons made from 1916 to 1940. They often had no resemblance to the character on the comic page.

After Herriman’s death, KRAZY KAT became a dormant property. But only a few years later, the boom in comic book popularity suggested a  possible future for the Kat, so a redesigned version appeared in 1951, published by Dell . This was done by comic book great John Stanley (1914-1993), creator of LITTLE LULU. 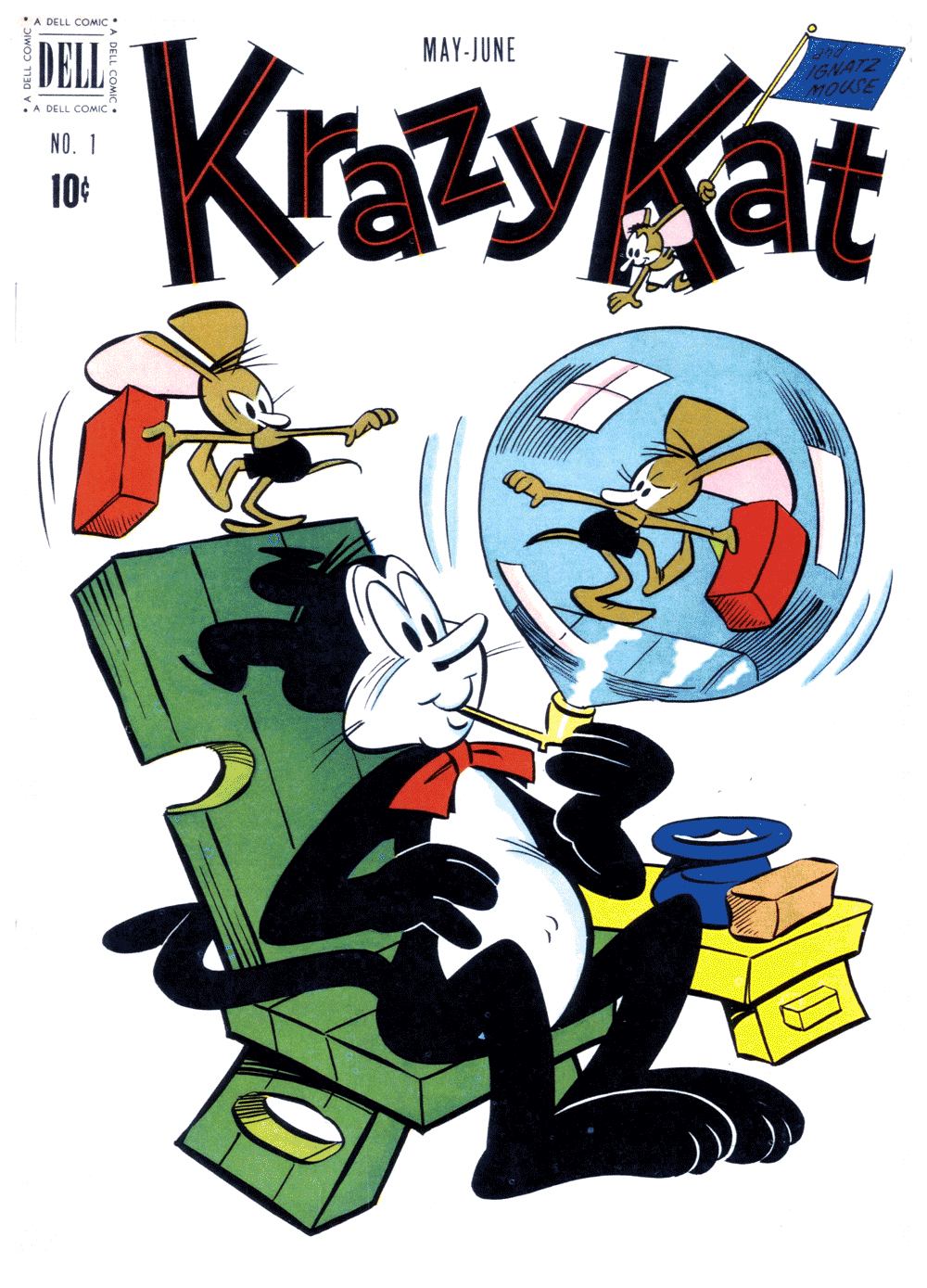 The New modernized KRAZY KAT by John Stanley, 1951, and a sample of his strip style from the back cover.

Stanley opted for a drastic overhaul of the characters’ appearance, but this carried them too far from the original. I don’t know that he really understood the characters or cared much to do it, though it lasted about a dozen issues until 1956. Then, KRAZY KAT went idle again. 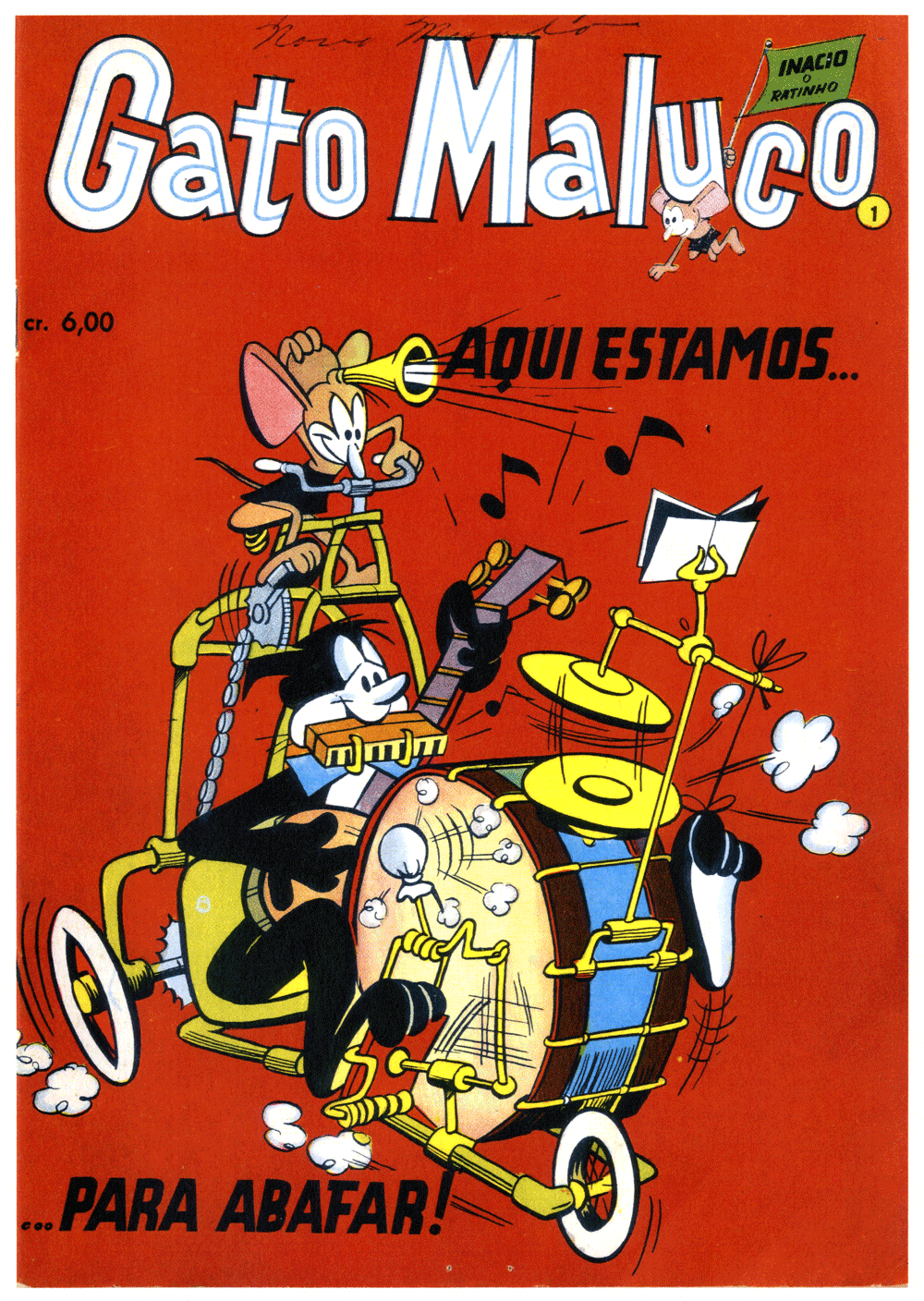 Another Stanley cover, in a Brazilian version, circa 1956.

In 1963, made-for-TV cartoons were a hot commodity, with King Features already scoring a major hit with our new POPEYE series. What could be a more logical choice than another veteran animation star, KRAZY KAT? Of course, these were going to be different than the previous incarnations of the Kat, in that at last we would now go back and make a version based on the Herriman original.  Sort of. 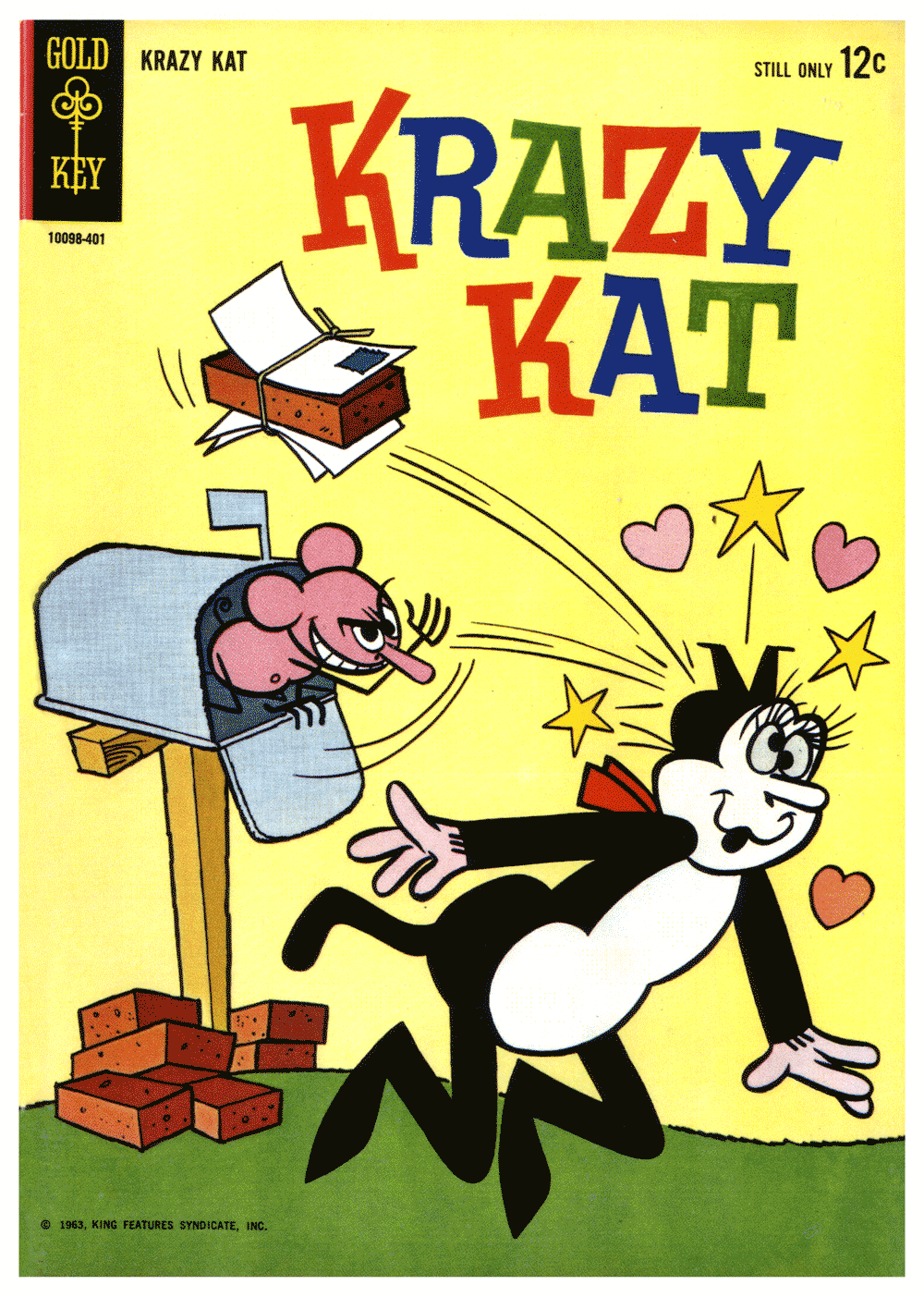 The cartoons were made by directors, including Jack Kinney, Al Kouzel and Gene Deitch. They weren’t as successful as the POPEYE cartoons, maybe because they were so weak. Voices were supplied by Paul Frees, who gave Ignatz a high-pitched New York accent like a dead-end kid, and Offica Pupp, an impersonation of Ed Wynn. The Kat was voiced by Penny Philips, who decided Krazy should sound like a tipsy old lady speaking baby talk. This nevertheless changed the Kat’s sex, whereas in the theatrical cartoons Krazy was definitely male, she now had metamorphosed to female. 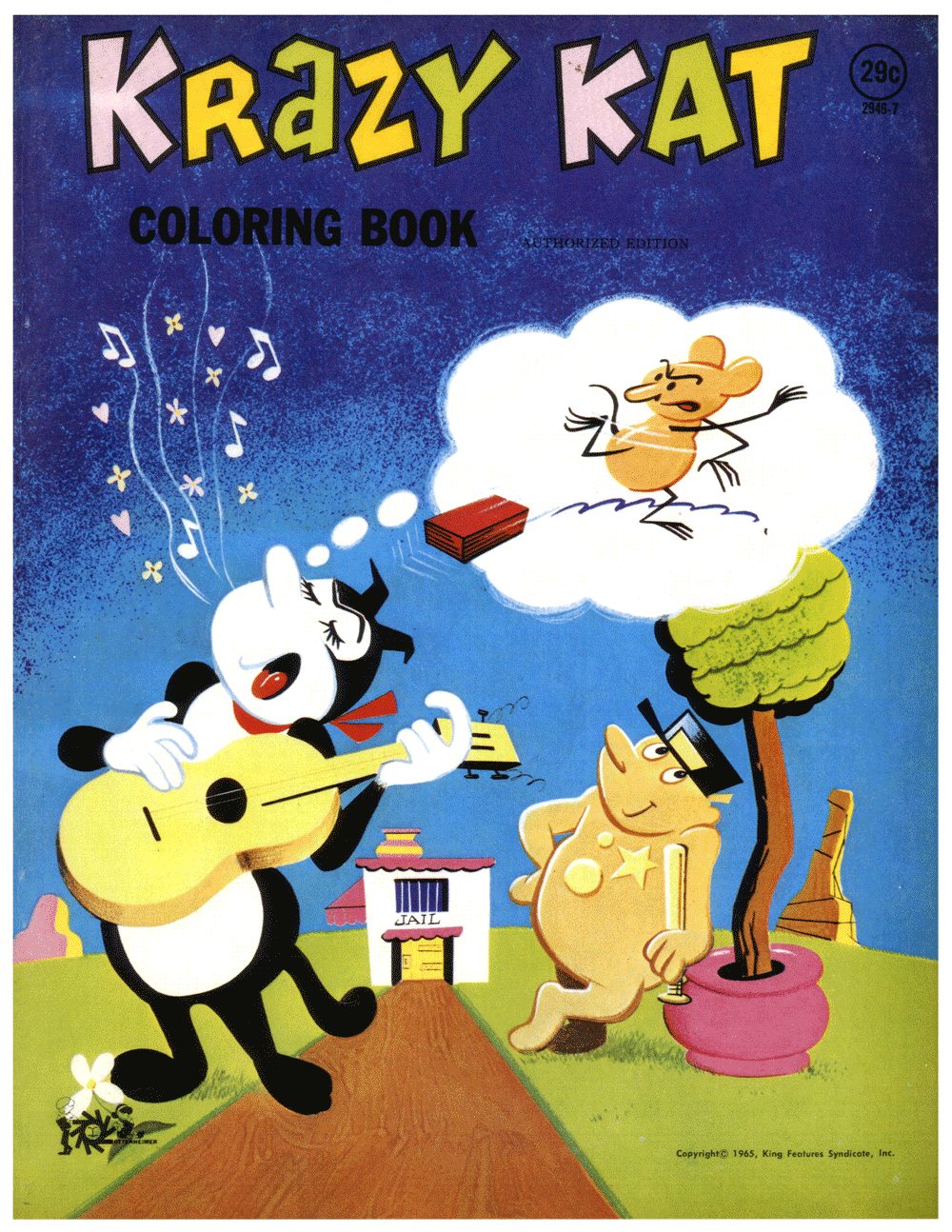 A 1965 KRAZY KAT coloring book has art more or less matching the TV series on the cover, but the pictures inside are tracings of 1930’s Herriman strips.

After the 1960’s, there weren’t a lot of licensing possibilities for the new Kat, and it just faded away. Perhaps, the idea that it was hard to sell something that had ended in its most famous incarnation decades ago led to these updates. In the end, if there were KRAZY KAT fans, they wanted the real McCoy, or rather, the real Herriman.  Since then, we have pushed the original. 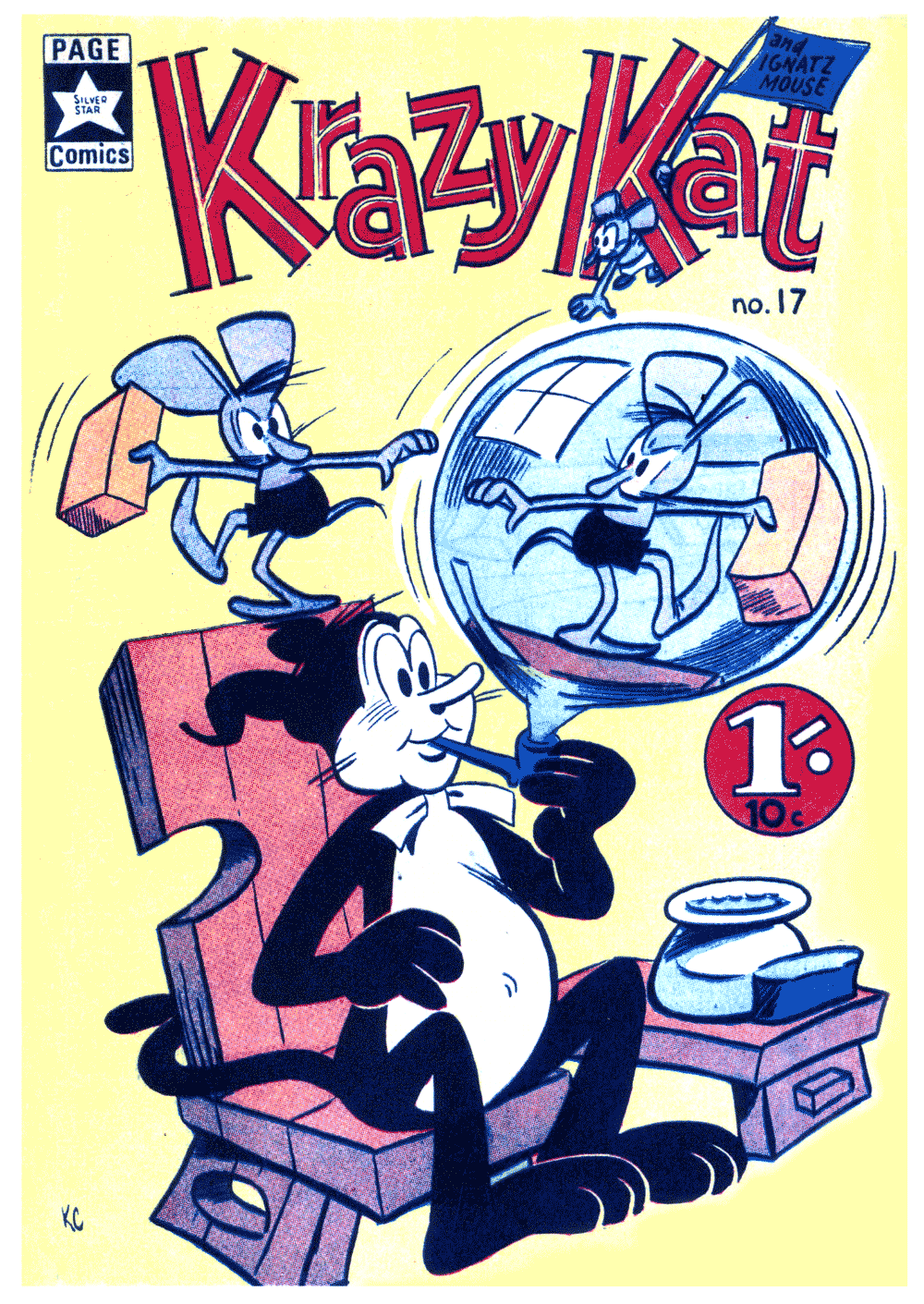 Australian comic book legend, Keith Chatto (1924-1992), did the cover for this one-shot circa 1964. It’s an odd book in that the guts are all from the Kilgore Gold Key issue, yet Chatto redrew the Stanley gag from the first Dell title.

P.S. See next week for my one hundredth blog entry!