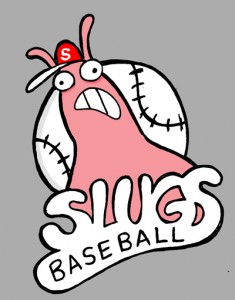 It’s the 1st Tinkersons “Sunday MOREning” blog.  Each Sunday, this blog will give you a little “more” of a look into the Tinkersons world.  Since it is ALL-STAR week in baseball, and since i work for the Altoona Curve, which is the AA minor league affiliate of the Pittsburgh Pirates, i found it fitting to start off with Ted and his passion for baseball.

Ted is a rabid fan of his own local minor league team, the SLUGS, and that could possibly send him to an early grave from a stress-related heart attack.

Reason being, is that the SLUGS haven’t had a winning season in over 10 years and there doesn’t appear to be any end in sight. (I’m a Pirates fan so you may see the link in this story line.)

Ted even gave up golfing when the team moved town so he could buy season tickets which turned into giving up one stressful situation for another.

So, during the season, you will see some baseball related comics peppered into the mix, but no pepper games will be allowed.