Following last week’s entry, today we will see the immortal Rube Goldberg’s last efforts for a syndicated series, long after the demise of BOOB MCNUTT.

After his unfortunate attempt at a serious continuity strip, DOC WRIGHT wrapped up in 1934, Rube then created a new comedy series, “Lala Palooza,” about a fabulously wealthy but naïve lady and her many money-losing ventures.  It turns out so was la Lala, which was distributed for little more than a year by the lowly Frank Jay Markey in 1936-37. Reprints were sold to Western Newspaper Union, which mainly serviced rural weeklies, from 1938-44. 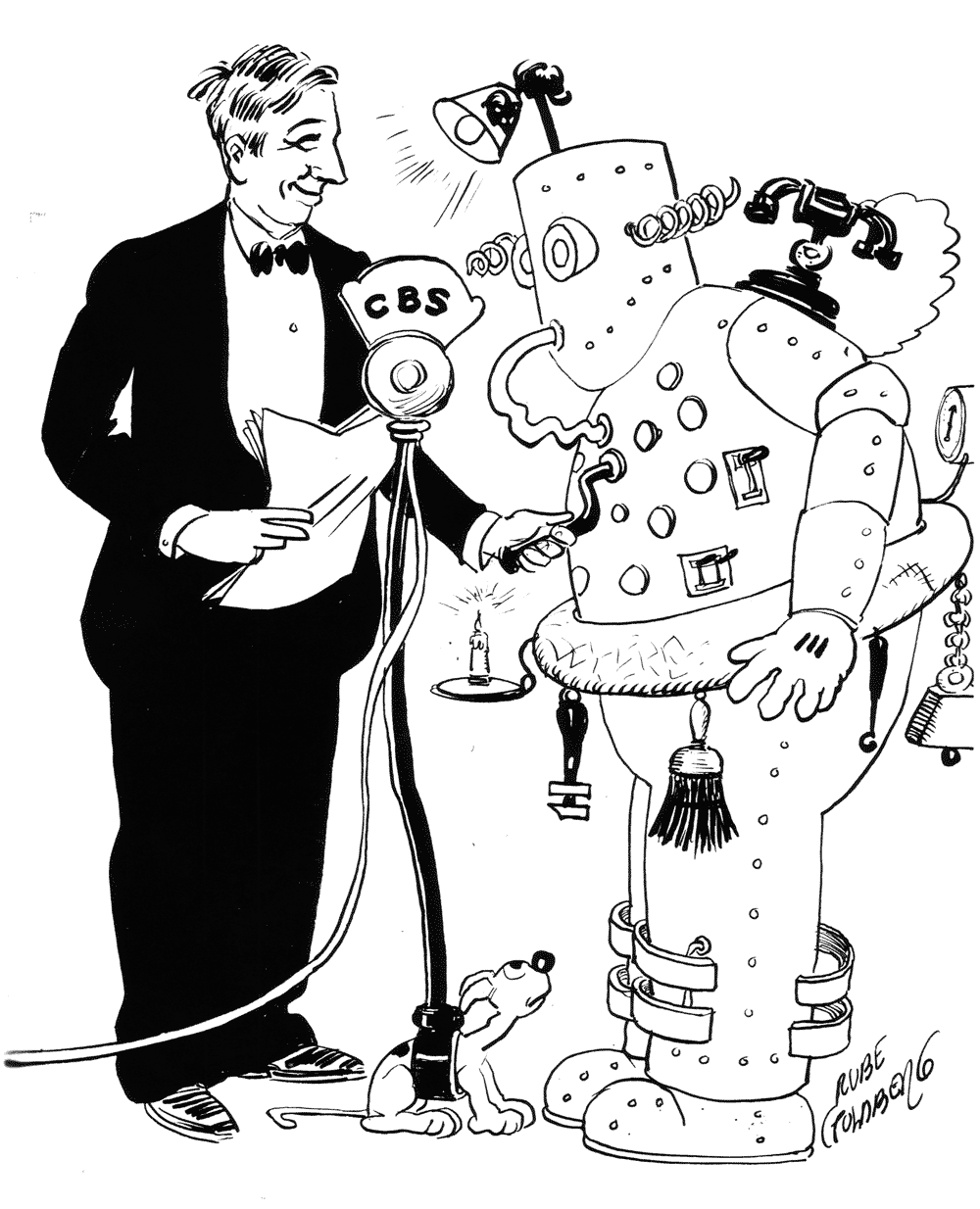 Here’s a super-rare self portrait of Rube that I can’t resist using.
Photo courtesy of Cole Johnson.

In 1935, he took time out to do a short-lived radio series. It was a sustaining show, meaning that it had no sponsor. Unfortunately, it never did attract one, and that’s why it was short-lived. Here’s the caption, in full:

from COLUMBIA BROADCASTING SYSTEM
485 Madison Ave., New York City
NEWS PHOTO DEPARTMENT
SUGGESTED FOR RELEASE ON: SAT. DEC 7 OR THEREAFTER
RUBE’S STOOGE
Little “Irving Q. Ironsides,” radio’s first mechanical stooge, does his stuff for inventor Rube Goldberg, Recently awarded an old car coupling by the Weehawken Iron Works for “Man’s Inhumanity to Man.” Rube and his radio robot are featured on the WABC-Columbia network every Tuesday and Thursday From 7:15 to 7:30 p.m., EST (December 3). “This cunning little fellow, “announced Goldberg, “comes from a long line of spare parts — some of which he will play on our programs. His grandfather was a Model T, and his father on his mother’s side was an old hot water heater from Rye.” The picture above, of course, is by the hand of Rube himself.
CBS PHOTO- RELEASED 12/7/35
RUBE GOLDBERG and his mechanical “stooge” as drawn by Rube Goldberg, who was heard over WABC-Columbia network.

It was pretty clear he had become stale in the world of comics, but he was still a star cartoonist, perhaps more famous than any of his creations, outside of his wacky inventions. Yet, he couldn’t put his pen down and adapted to a new endeavor once again, now shifting to editorial cartooning.

The New York Sun was a prestigious evening daily when Rube joined it in 1938, just in time to cover World War Two and the early Cold War years.

He was adept at pithy, intelligent cartoons, which were well received enough for him to win the 1948 Pulitzer Prize. He won for a 1947 effort, “Peace Today,” which depicted an American home atop an atom bomb, teetering on the edge of the cliff of “World Control,” over the abyss of “World Destruction.”  Though the Pulitzer is the ultimate expression of success in the editorial cartoon field, Rube was soon out of a job nevertheless, for as 1950 dawned, the troubled Sun became another casualty in the sad parade of post-War newspaper deaths at the hands of intractable unions. The Sun’s name and some syndicated features were merged into the Scripps-Howard chain’s World-Telegram, but they had a different editorial policy from the Sun and Goldberg.

But a great name like Rube’s couldn’t be put out to clover, though he was by this time in his sixties.  One last rendezvous with the Hearst Corporation came about later that year.  It must have looked like a stroke of genius to combine Rube’s two great strengths in one feature, that is, his topical observations and his immortal inventions.but the result was not a doubly inspired creation, more like something half as good as both.

The feature, Rube Goldberg Views the News for His Latest Invention, began in late 1950 as a once-a-week panel to go amongst a client newspaper’s editorials. Yet, it seemed to find its way to the comics page anyway. What at first seemed an inspired concept, soon grew obvious. There just wasn’t much excitement in it. For one thing, he had been doing the same invention themes then for nearly 40 years, and the infusion of caricatures of famous people of politics or popular culture seemed pointless, like a gag without a punch line.  Perhaps, not unexpectedly, this was not a popular feature and ended in mid- 1952.  Some samples I offer below, along with some footnotes for those of you who aren’t as long in the tooth as yours truly. 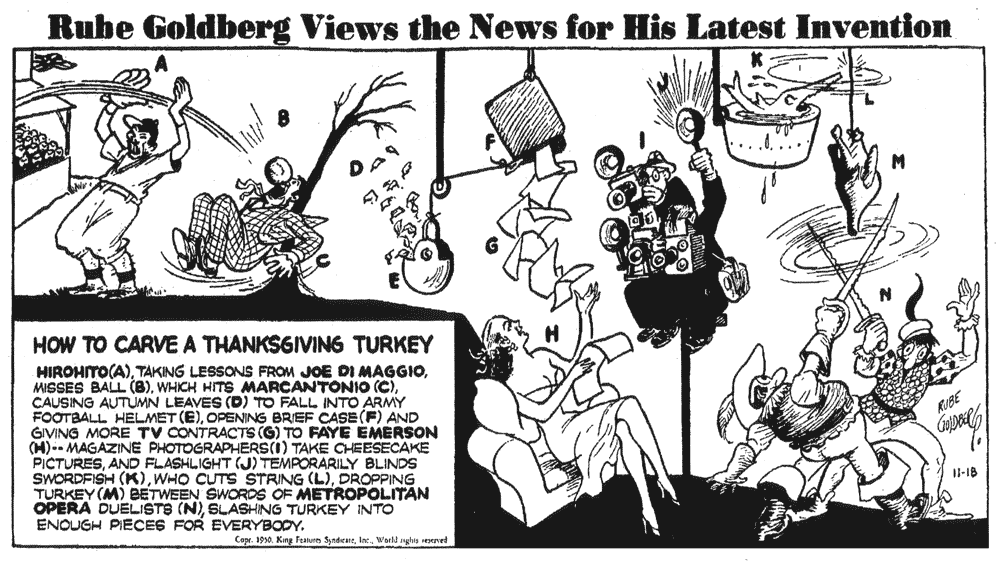 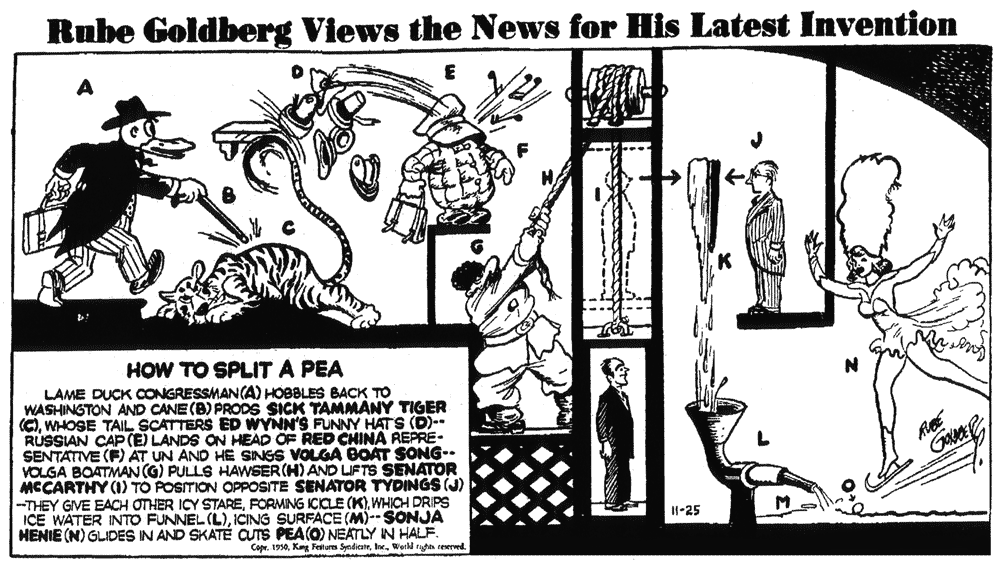 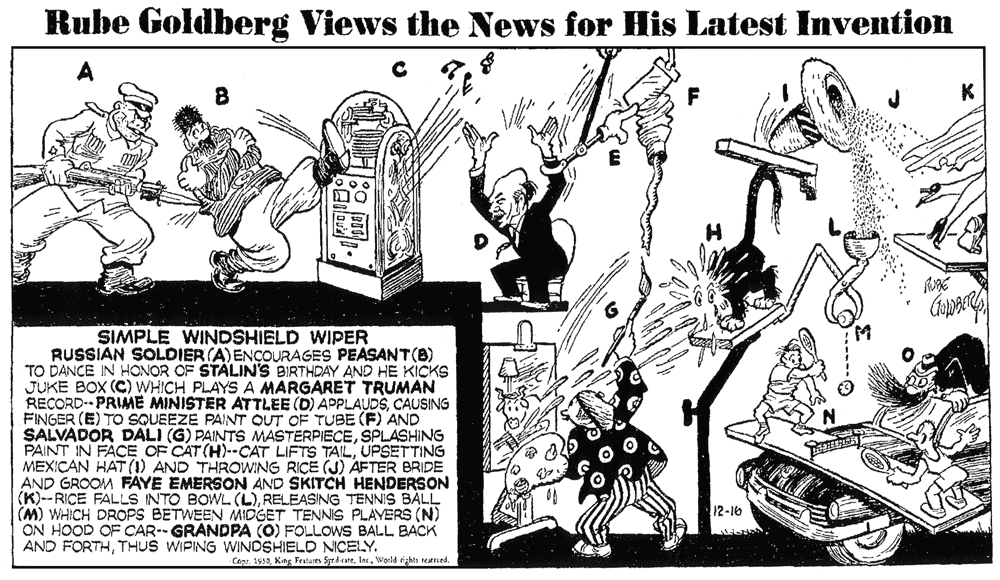 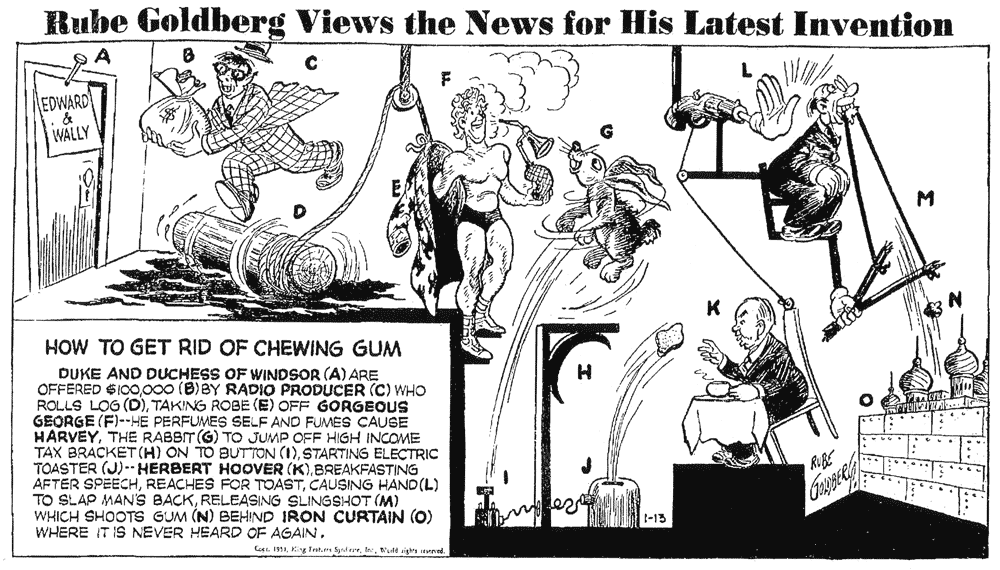 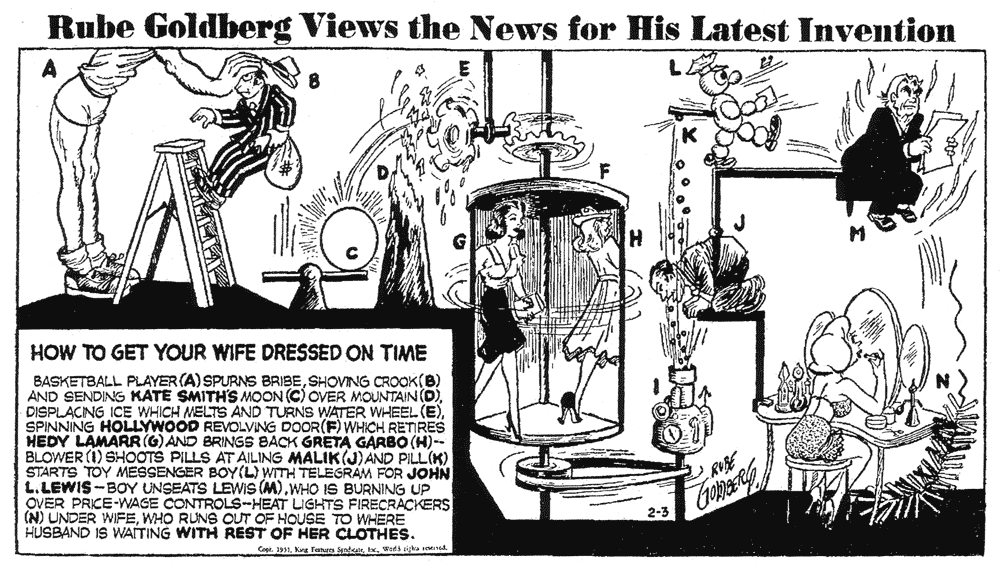 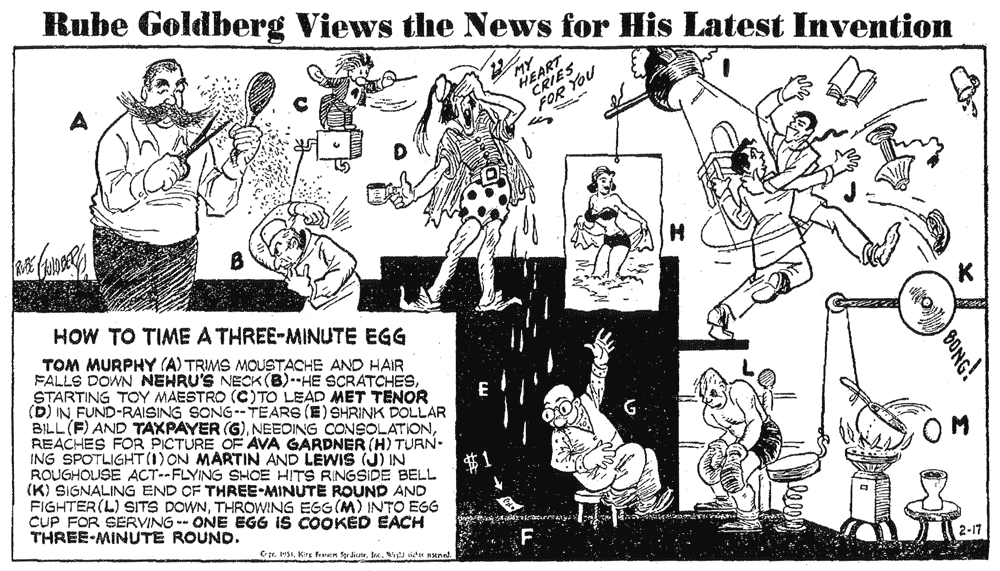 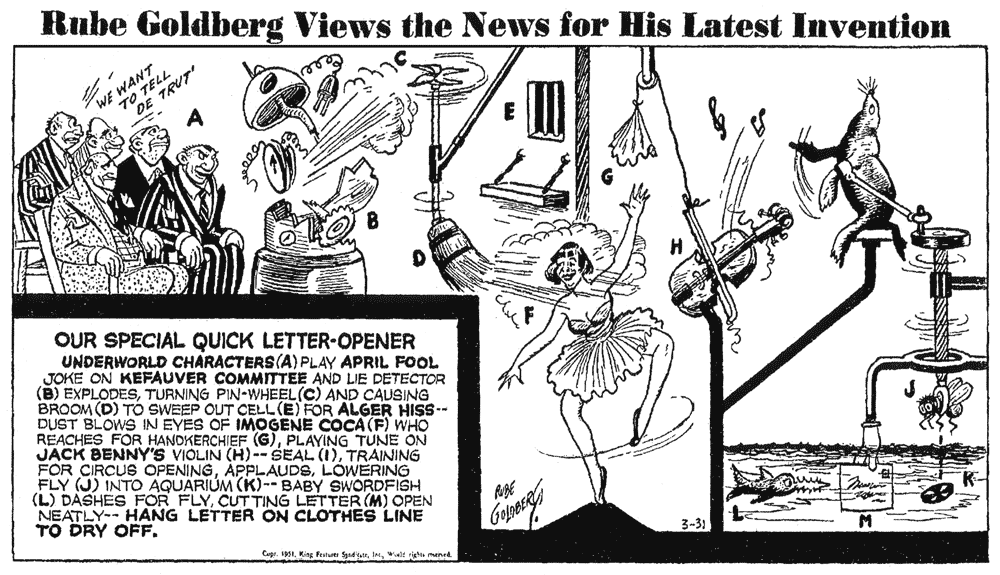 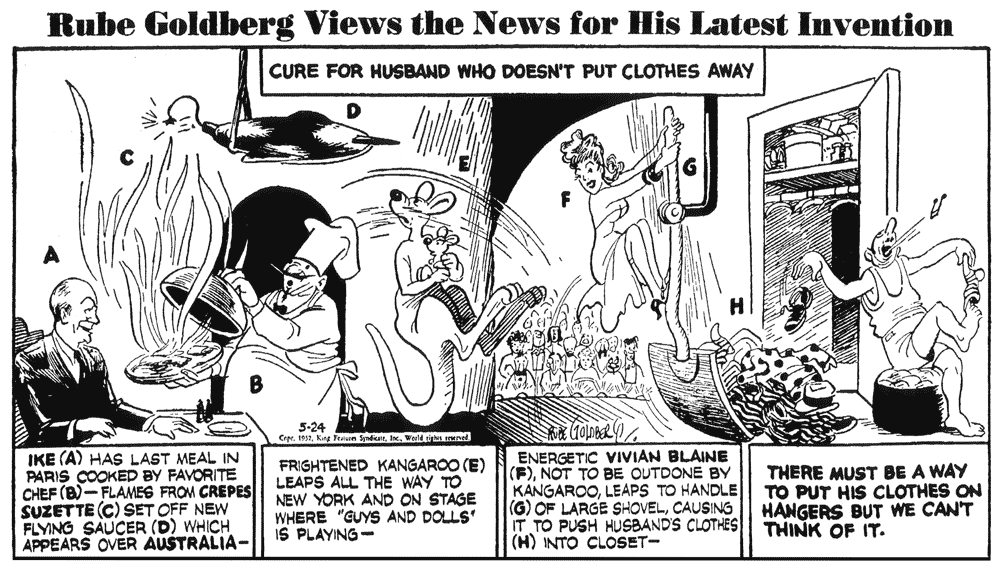 “IKE” was DWIGHT D. EISENHOWER (1890-1969): Commander of the Allied Forces in World War Two, but still just a presidential candidate here in 1952.
Flying saucers were spotted over Sydney in early May, and made for good copy around the world.
VIVIAN BLAINE (1921-95): Film and stage actress/singer most noted then for essaying the part of Adelaide in the original Broadway production of GUYS AND DOLLS.

Goldberg finally retired to his estate/studio where he pursued non-cartooning hobbies, including sculpture which he was quite talented at, for another 18 years until his death in 1970 at age 87.

To Mark Kausler and Bhob:

Sorry about the slip up with KRAZY KAT last week. Now we’re back on track, and I’ll do a Kat posting next week.

Glad you like Rube Goldberg, see next week for another. It won’t change your mind. I hope.