Happy Independence Day! Hope you all see fireworks tomorrow on this great national holiday. Some great Americans were born on that day, including Stephan Foster, Louis B. Mayer, Calvin Coolidge, Louis Armstrong and George Steinbrenner. But, today we especially recall one of the most famous American cartoonists, Rube Goldberg, who was born on the Fourth of July in 1883.

Rube is best known for his fantastic, massive contraptions that featured machines, animals, and people — all connected to achieve absurdly petty results like winding an alarm clock or squeezing a toothpaste tube. To this day, the name Rube Goldberg is synonymous for futile, over-complication.

In the course of his long career, Rube created many series including: “Foolish Questions,” “Mike and Ike, They Look Alike” and “I’m the Guy,” which did remarkably well for being outside of a large syndicate. Through the years, his cartoons had been distributed through many outlets from McClure down to the Frank Jay Markey organization, but mostly his work was self-syndicated.

However, he was lured over to Hearst in 1918, where he automatically got a spot in our first-class Sunday section which ran in top newspapers. So, 95 years ago in June, a new character, Boob McNutt, was born. This character lived up to his name. He was a big, dopey man-child who began every episode forlorn, despondent and suicidal; yet somehow, a good Samaritan always would come on the scene to offer him a fresh start with a new job. These would inevitably be tasks requiring a lot of trust (foolishly placed) on their part and intelligence (totally lacking) on Boob’s end of the arrangement. 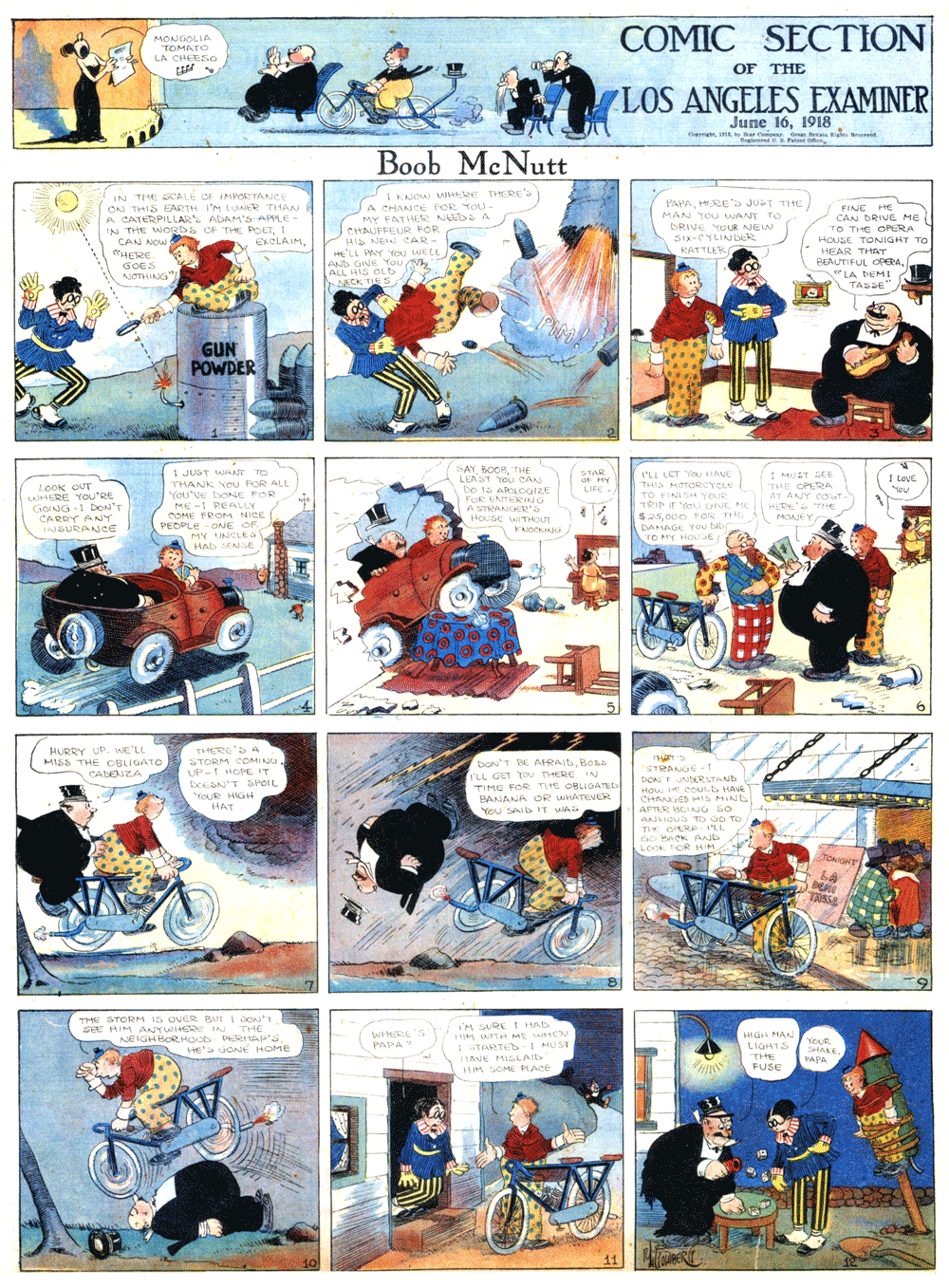 Boob’s debut page. This was meant to run on June 9, 1918, but inexplicably the Los Angeles Examiner regularly printed strips a week behind every other newspaper. 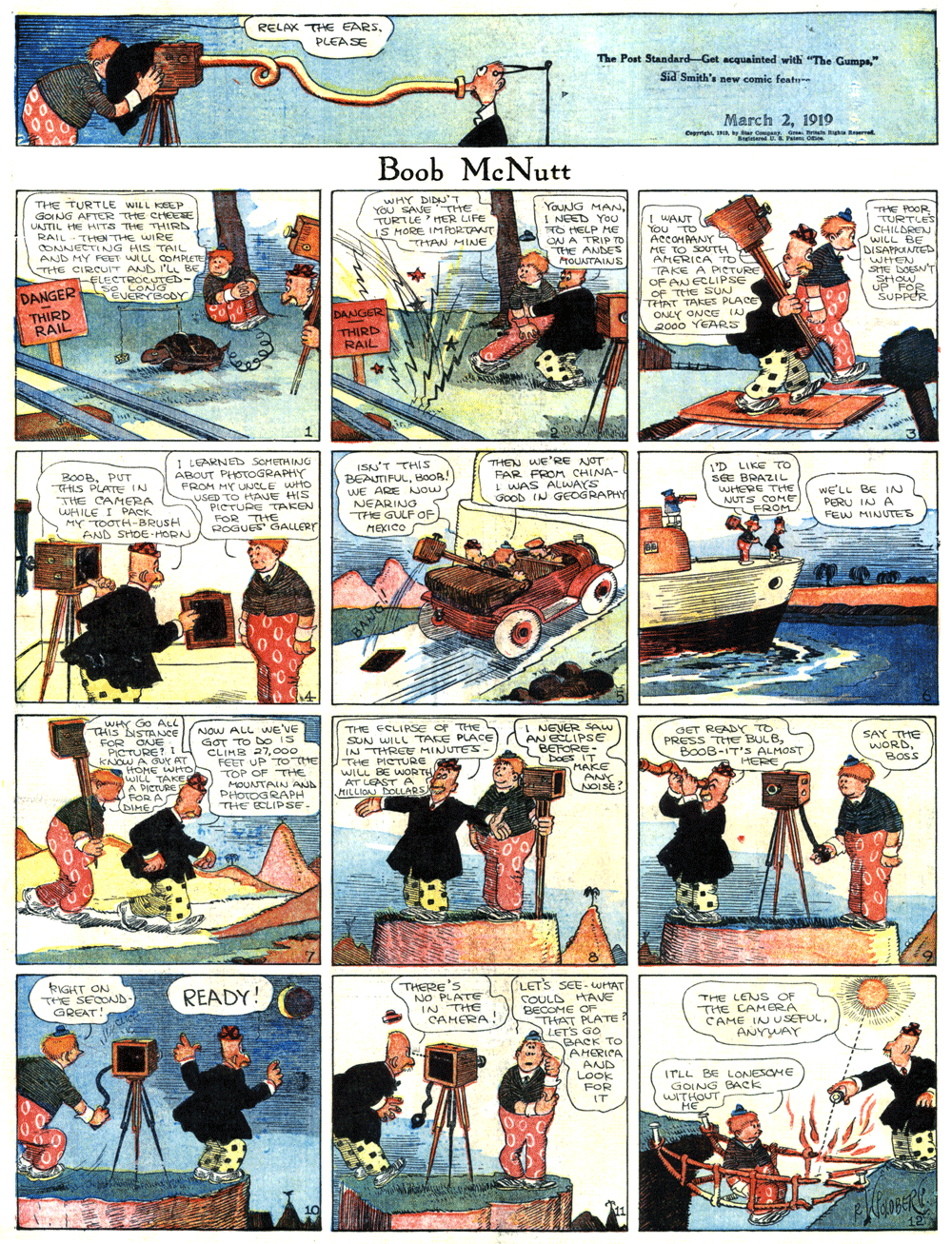 The real-life inspiration for this adventure was a then-famous scientific expedition lead by Sir Arthur Eddington to record a phenomenally long (almost seven minutes) total eclipse of the sun, with the best visibility seen in the southern hemisphere. Though Boob ends up in Peru, Sir Arthur’s destination was a remote African island.

Botching a job every week can only go on for so long, and with this strip was added a love interest and an arch-enemy in the form of Pearl and Major Gumbo. Pearl would go on to marry, divorce and remarry Boob several times before the strip ended in 1934.

Rube and Boob had a run of 16 years with King Features Syndicate, but having the temperament of a true artist, and being very well off, Goldberg got bored with Boob and could afford to retire him in favor of a fresh project. In the early 1930’s, the hottest thing in the comics world were daily continuity stories. Rube had been doing nothing but the broadest slapstick comedy for almost 30 years, and he couldn’t wait to try his hand at a straight melodrama, in the form of DOC WRIGHT, the saga of a pure-hearted, selfless country doctor. This was done for the McNaught Syndicate, and though it even had spots in some leading Hearst dailies, it never captured enough clients to stay viable and only lasted from January to November 1934. Probably because it was really a dull, cliché soap opera, devoid of Rube’s sense of humor.

He eventually came back to the Hearst fold for another short period many years later, and I’ll show that effort to you next week.

MR. WHOOPEE asks how we could let Frank Willard wander off to the Chicago Tribune Syndicate in 1923. I suppose we had our plate full with men who specialized in the cards-horses-drinking-overbearing-wives genre, men like Billy DeBeck, Tad Dorgan and Jean Knott.

Always glad to show some of our more obscure titles.  Most of the greats of the past had some relationship with us, but it’s odd that Willard reversed the usual trend and moved on from Hearst to become a star.

Wishing all a safe Independence Day! Stay away from greasy fireworks and short-fused barbecues!