Ask the Archivist: “The Wit of Frank Willard”

When one hears the name Frank Willard (1893-1958), many think of the Chicago Tribune-New York News Syndicate star cartoonist who created MOON MULLINS. Few know that he worked for King Features Syndicate earlier in his career.

Before World War One, he was one of the men at the small, but vibrant Chicago Herald’s syndicate, which was known under the name of its owner, J. Keeley.  There, he worked alongside other up and coming penmen, such as Billy DeBeck and E.C. Segar.  When the War started, he served in the Army in France. When he returned home, however, things had changed in Chicago. William Randolph Hearst bought the Herald in 1918 and merged it with his morning and Sunday Examiner, killing off the rival syndicate while hiring its best cartoonists. Willard, who was known as “Dok” Willard at that time, did a few spot items for the new Herald and Examiner, while his old Keeley cohorts soon began their King Features’ series. Segar had created THIMBLE THEATRE in 1919 and THE FIVE-FIFTEEN in 1920, and DeBeck had BARNEY GOOGLE in 1919 and the BUGHOUSE FABLES panel in 1920. Willard got his chance in 1921 with THE OUTTA LUCK CLUB. This comic strip featured the daily doings of Luther Blink, a bald, middle-aged guy, who much like Barney Google, was an unscrupulous schemer with a shrewish wife, and for whom nothing ever goes right, thus making him eligible for THE OUTTA LUCK CLUB. Sometimes, “The Outta Luck Club” was seen as an actual place. It was a daily comic strip only, lasting from 1921 to 1923, when Willard left for fame and fortune at the Tribune. 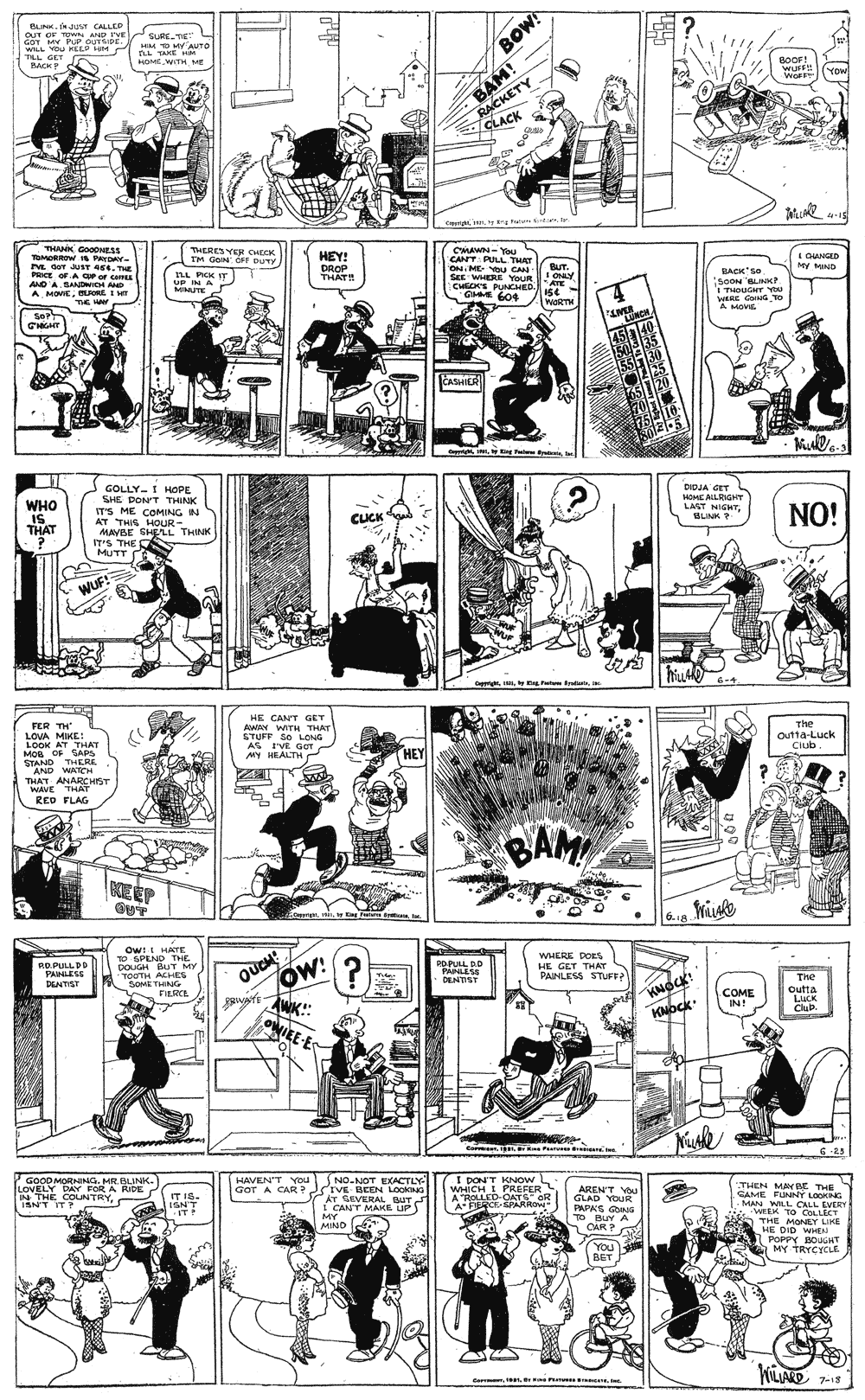 Some meetings of The Outta Luck Club from 1921.

Another series “Dok” worked on, but did not get credit for during his brief time at King Features, was the Sunday version of Jean Knott’s EDDIE’S FRIENDS, the saga of a hen-pecked poker addict. This was a real invigoration for a mediocre series, bringing it up to Willard’s slapstick comedy level later seen to best advantage in MOON MULLINS. 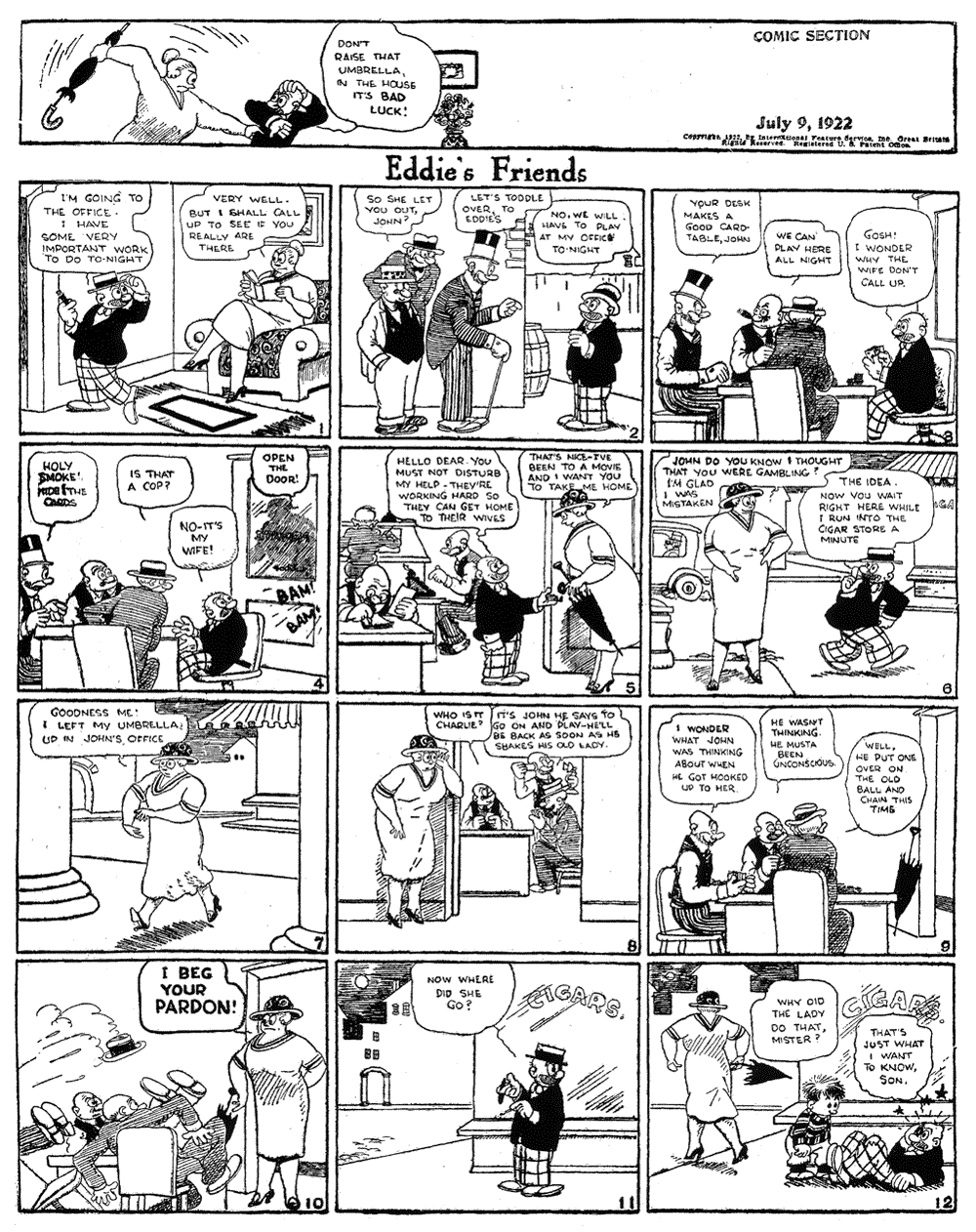 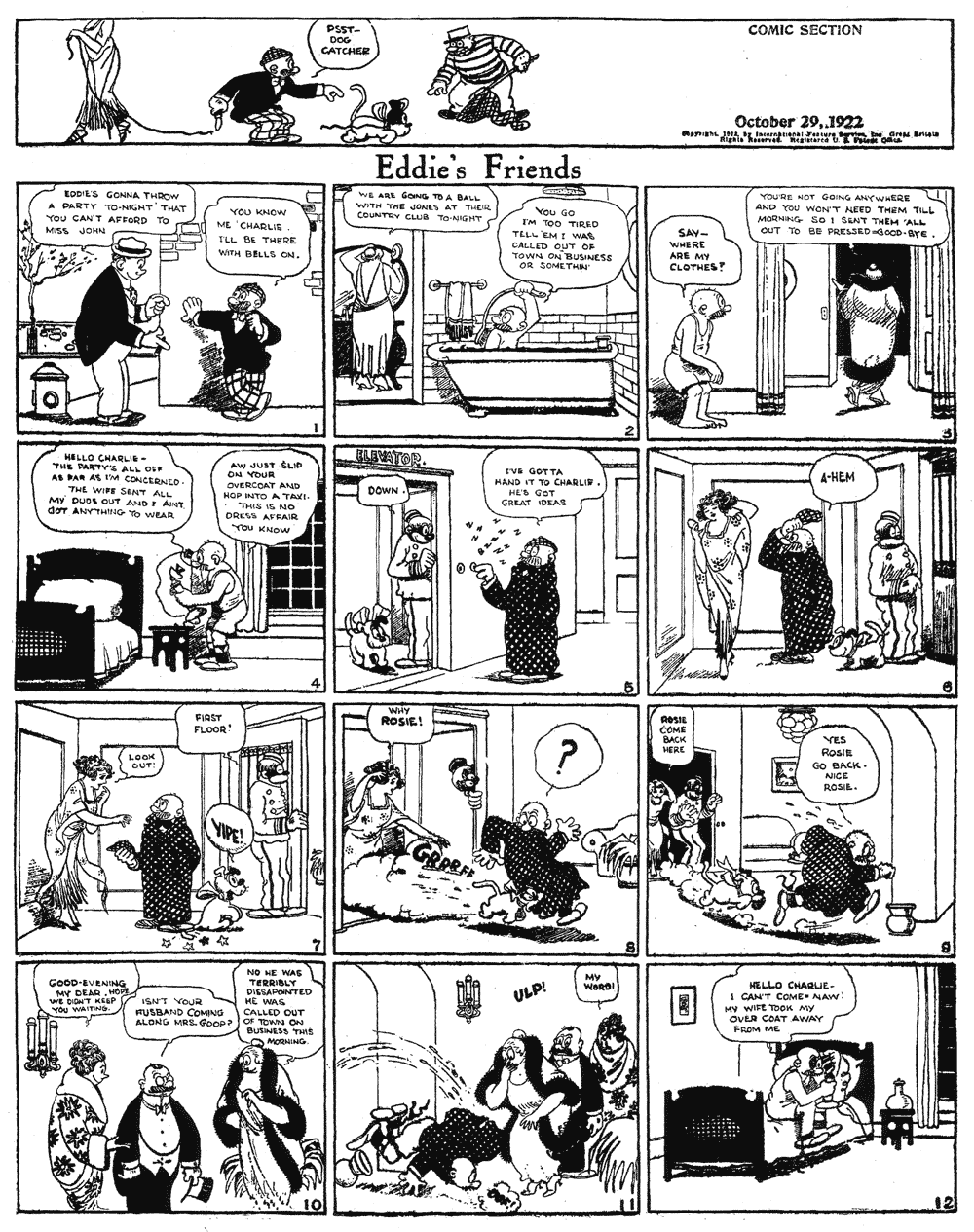 Some EDDIE’S FRIENDS ghosted by Frank Willard from 1922.

Next week, we will take a look at Rube Goldberg on his 130th birthday.