A King Features’ offering of 45 years ago this month would probably not find its way to print today. I’m talking about CHILDREN’S LETTERS by Stuart Hample. 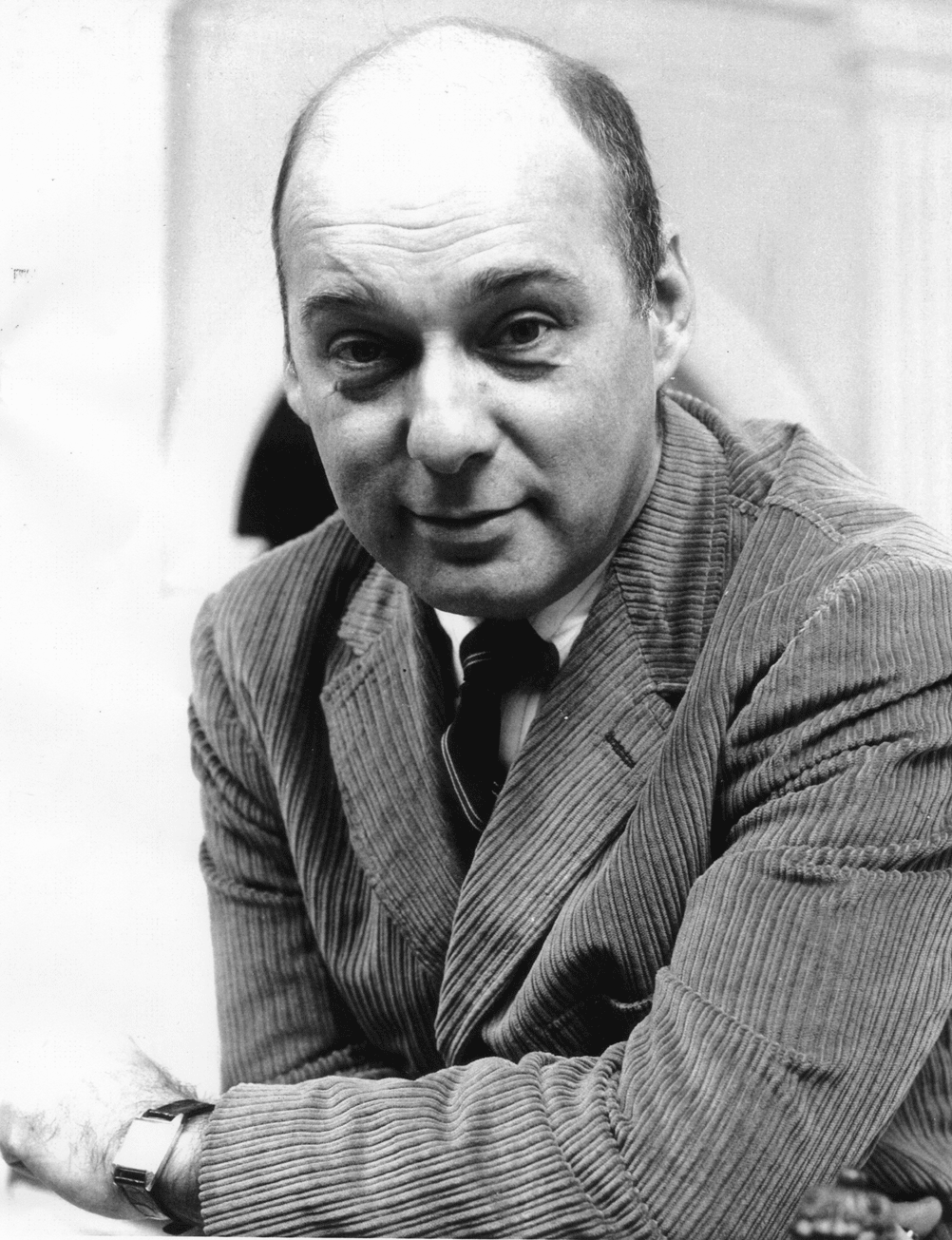 Hample, a one-time advertising agency and television comedy writer, co-authored a book with Eric Marshall in 1966, called CHILDREN’S LETTERS TO GOD that explored the way young kids perceived the Almighty, with many often humorous,  sometimes poignant misconceptions from the participants.  It was an international bestseller, reprinted into several languages.  Two years later, the idea inspired a daily King Features panel, debuting in more than 125 newspapers on June 24, 1968. 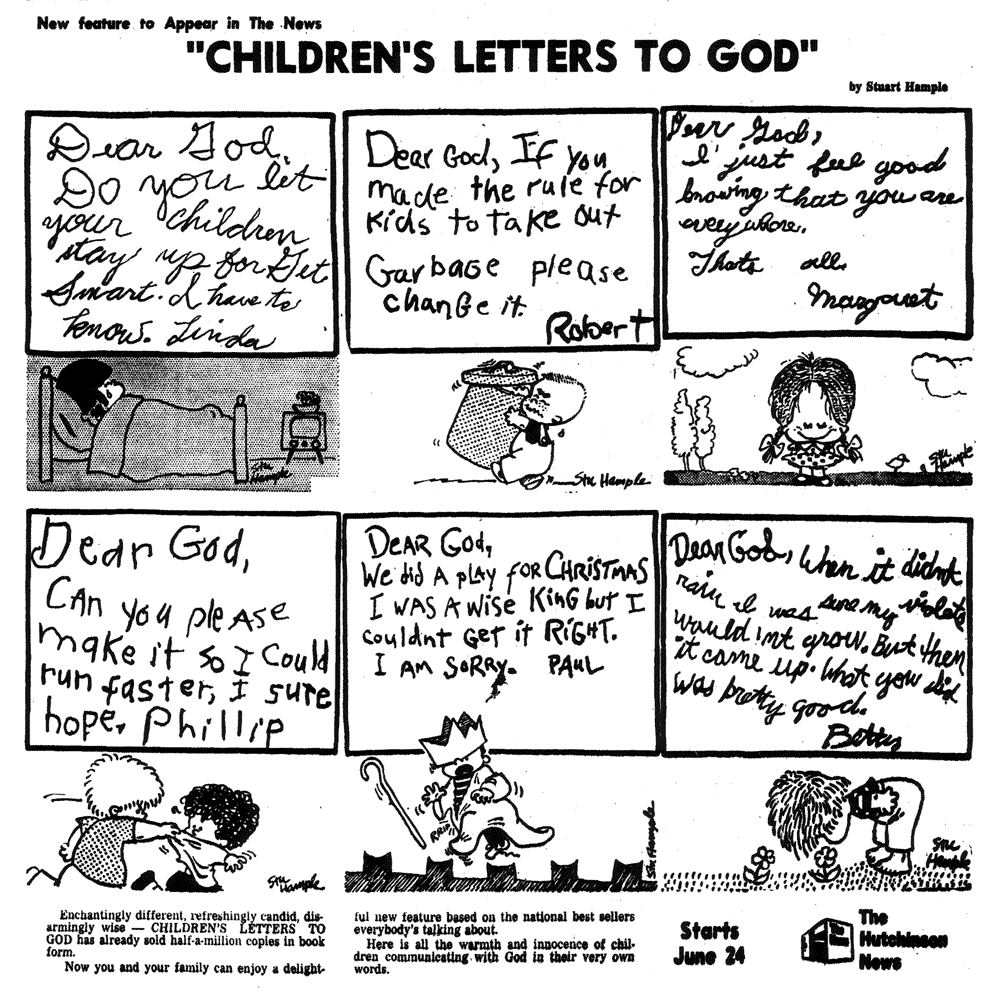 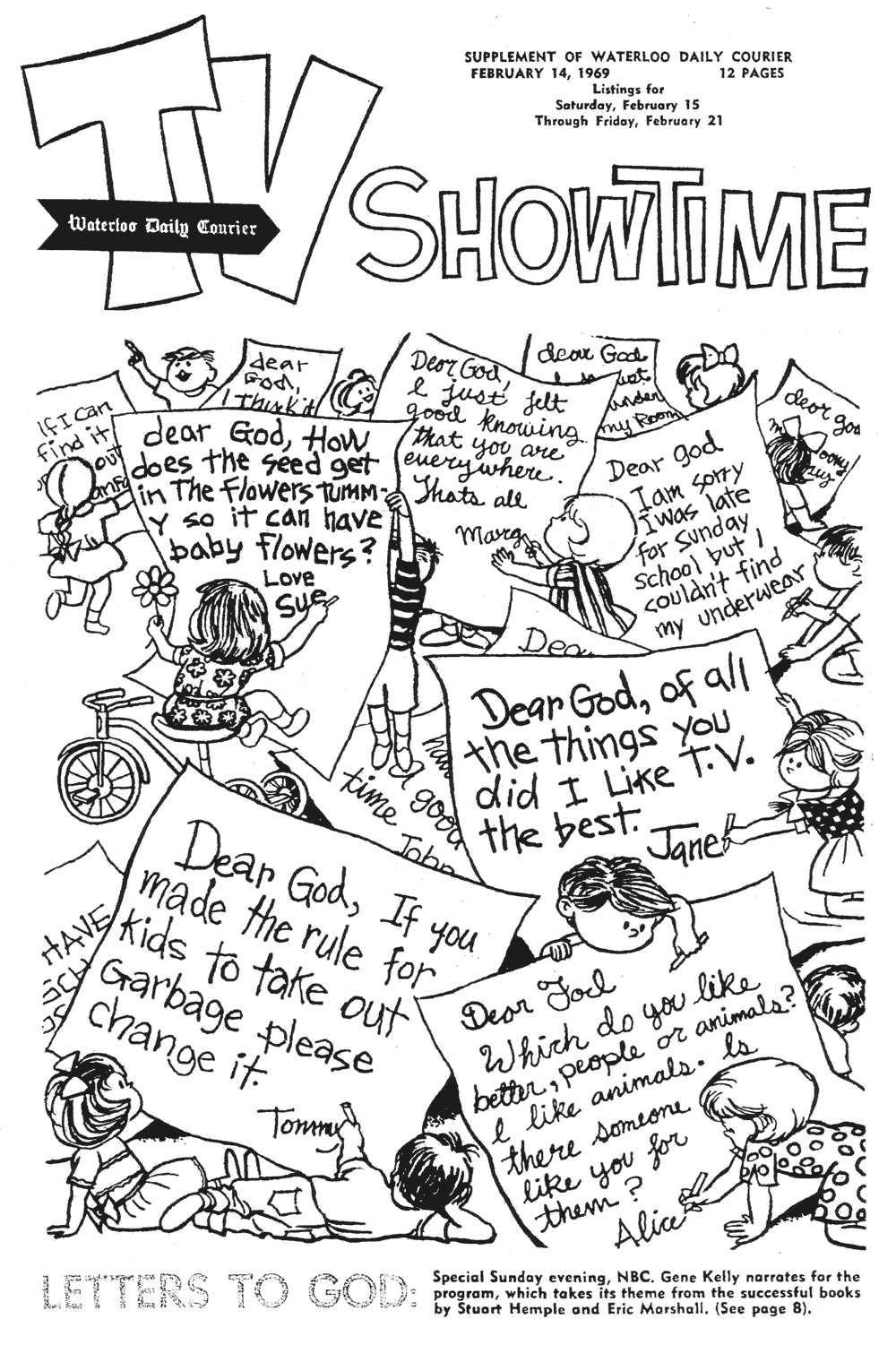 During the golden age of family-friendly TV In 1969, the letter-writing moppets were a natural topic to generate a prime time special.

The material was pretty much what you might expect would fit into a child’s eye-view of religion, something like what might be heard when youngsters say their prayers. The panels typically would contain requests for goodies, parental attention and school yard revenges. Unfortunately, though the concept worked so well in the book, it fell flat in the panel. As such, it would appear that Hample soon got bored with it. He often repeated the same themes, then the letters with different names attached, and eventually he just started rerunning whole panels. 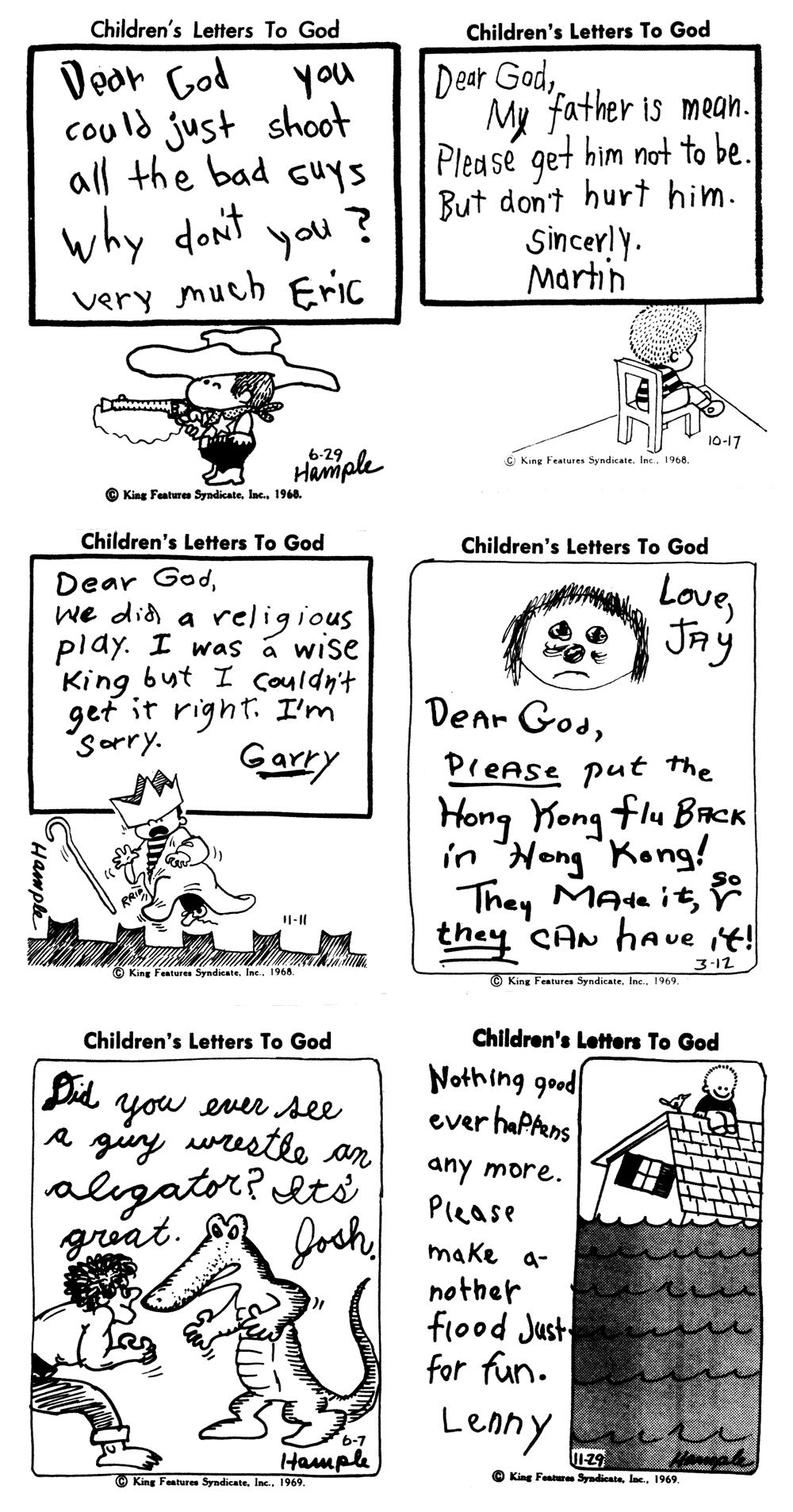 CHILDREN’S LETTERS TO GOD was shortened to CHILDREN’S LETTERS on March 22, 1971. Perhaps the abbreviated title was less offensive to more sensitive editors? However, at the same time, Hample was broadening the range of topics from new recipients, such as doctors, grandmothers, aunts, ministers, even politicians and other celebrities. Among them are unlikely readers for a child to have an urge to correspond with—like Dick Cavett, Mel Brooks, Howard Hughes and Liberace or long-deceased people like Henry Ford or Harpo Marx. There is even letters addressed to Hample himself in the mix. It is obvious that he was not relying on what was reported as huge stacks of letters sent in during the production of the book any more, and he was writing the letters himself.  While the series still didn’t live up to the potential of the original bestselling book, it would have done worse if they called it Hample’s Letters to Himself. 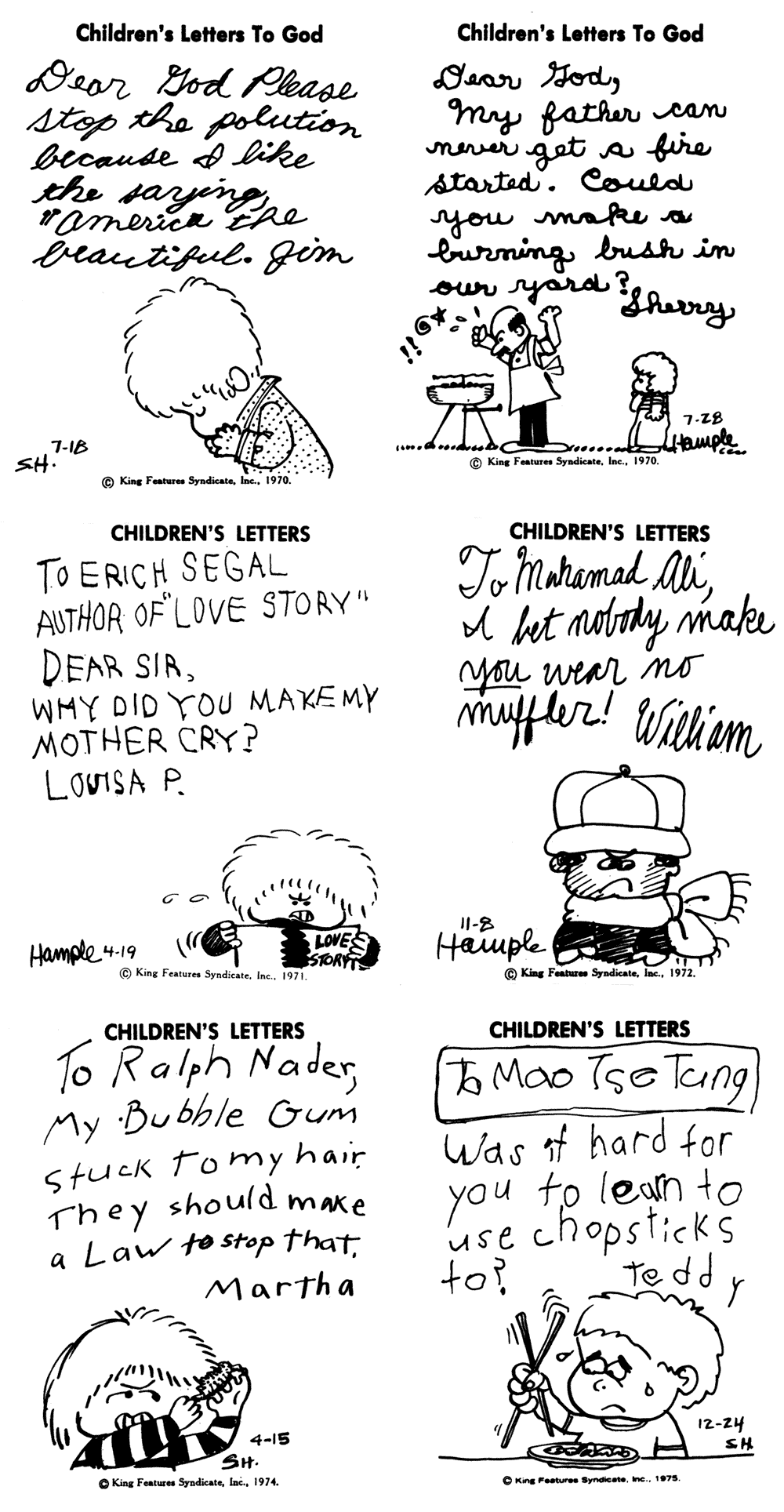 In other hands, CHILDREN’S LETTERS could have been funnier, especially the ones written to famous people, if done like a MAD–type parody, but it stayed just a mild attempt at childish charm, again reusing material and themes again and again.  For instance, what used to be requests made to the Lord were now being asked of Gerald Ford! The series ended on January 17, 1976.

Hample’s most famous cartoon opus came when he drew the daily and Sunday strip, INSIDE WOODY ALLEN, which began later in 1976. It was distributed by King Features Syndicate. Before you ask, it is, alas, unavailable for DailyINK.com to publish.  Mr. Allen holds the total rights of that feature.

We’ll dig up some more really obscure Hearst strips from the remote past again soon. There’s a lot, to be sure.

Yes, I agree that VIP (Virgil Partch) would be a great post. Many of his cartoons would be well worth seeing again, but I don’t believe we have the rights to the character, even though King (through NAS) distributed them.

Did you know that there were actually about a month or two of further BIG GEORGE panels that were never published? Our editor at the time, the late great Jay Kennedy, decided to throw in the towel when he did, because the sales were waning and VIP’s last contract was expiring then.

As for your MOOSE request, look for something coming soon.