The world’s longest running strip almost ended a century ago. In fact, it did for a little while.

In the spring of 1913, the KATZENJAMMER KIDS was the pride of Hearst newspapers and the top comic strip in the land. But all was not well concerning the strip’s cartoonist, Rudolph Dirks.  It seems Dirks felt that he could take time off from his drawing board whenever he wanted, but the syndicate didn’t agree. He didn’t see it their way, took an unauthorized vacation and was fired. Unfortunately, this brought the beloved strip to a halt because Dirks contended that he, not William Randolph Hearst, actually owned the characters. Dirks had created them and had been authoring the Katzenjammer Kids’ adventures for the past fifteen years, an impressive feat in those early days of comics. See the first episode here.

Hearst countered that Dirks might have created them, but as an employee, his output belonged to the company. This argument went to the courts. In the end, both parties won — sort of. Hearst and Dirks could each have their own versions of the characters, though we (here at the Hearst Corporation) could keep the KATZENJAMMER KIDS name and characters. Dirks could do a strip that was almost the same. (Hans and Fritz switched names.) 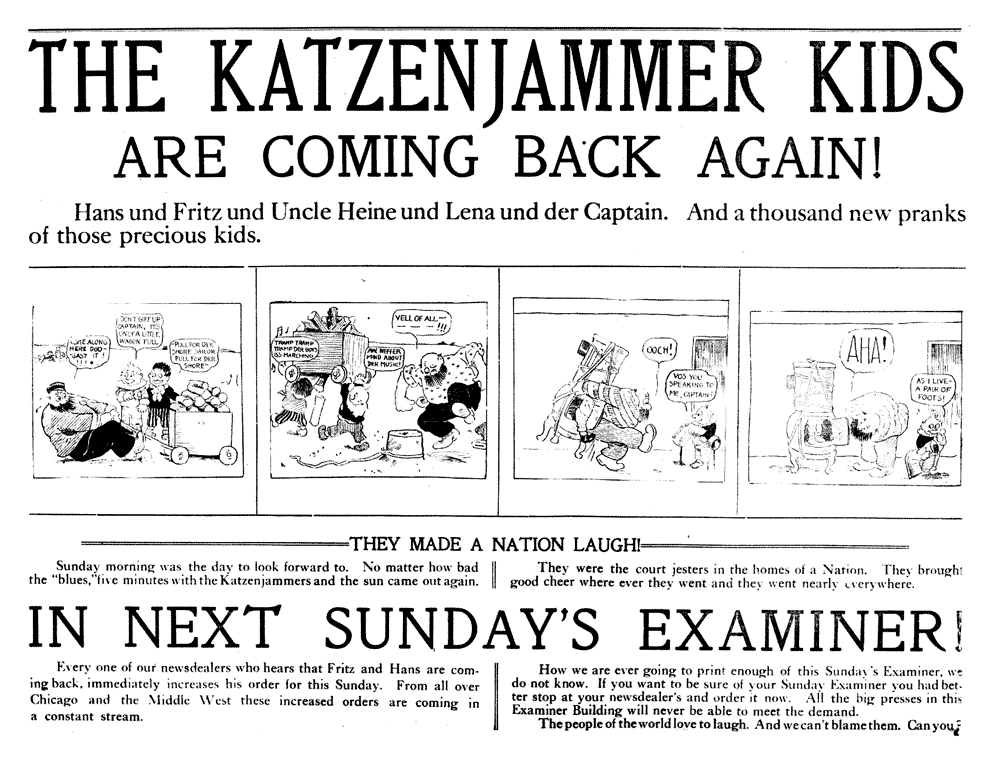 Hearst’s  KATZENJAMMER KIDS returned after more than a year, on May 23, 1914. Dirks’ new version made its debut two weeks later, titled at first “Hans Und Fritz,” and then a few years later as “The Captain and the Kids,” and syndicated by the Pulitzer organization (later United Features). 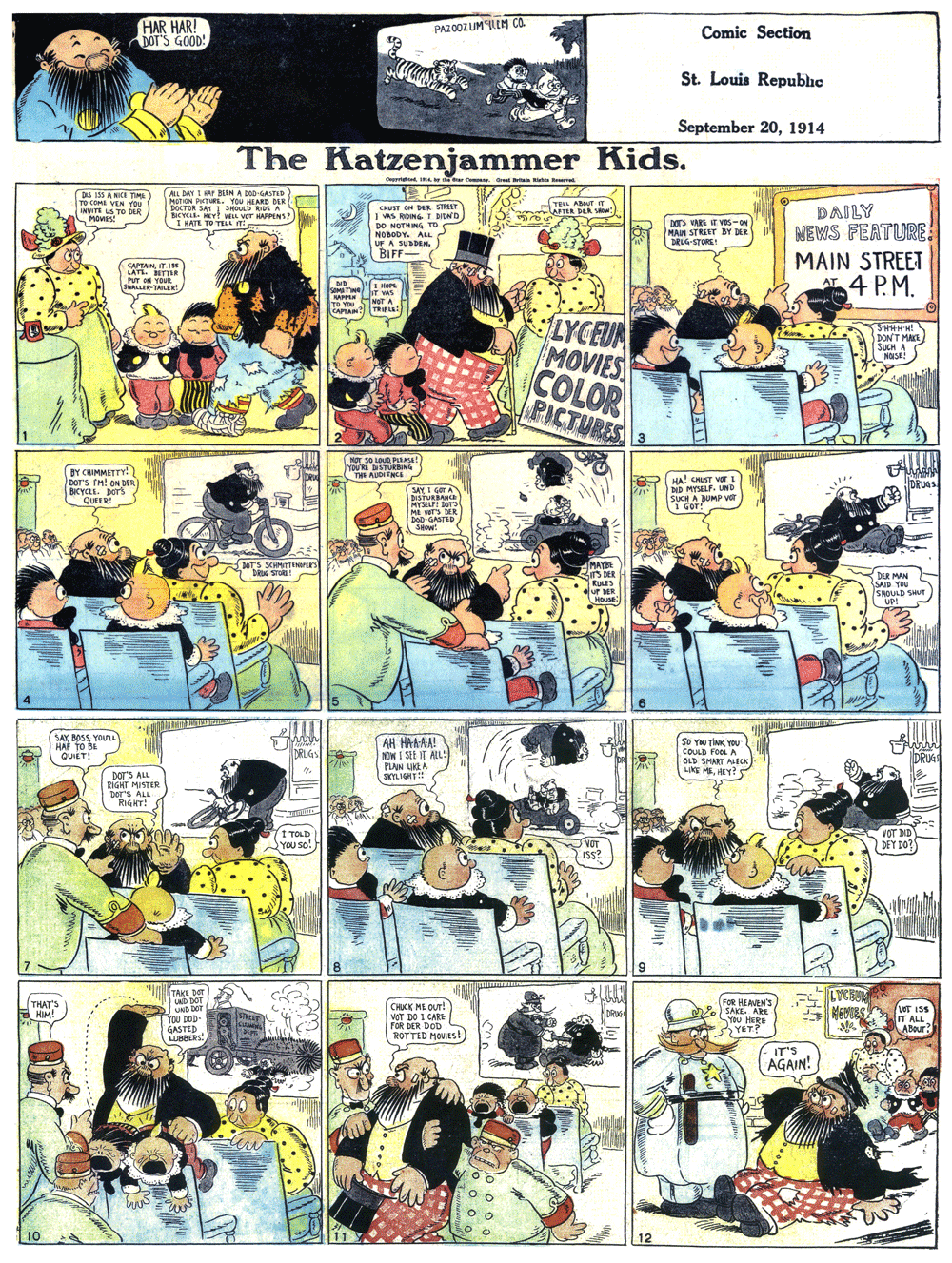 From May to November 1914, unsigned Ghosts did the revitalized page. This is one is probably by Billy Liverpool.

The first few months of the new Hearst series were unsigned, some were likely done by Billy Liverpool, one-time ghost for Bud Fisher on MUTT AND JEFF. In November 1914, Hearst finally acquired the services of the man who would take the helm for the next 35 years: Harold H. Knerr. From 1903 to 1914, Knerr had been doing a competing, fairly popular KATZENJAMMER-like strip, “Der Fienhiemer Twins,” for the Philadelphia Inquirer Company. Something that Mr. Dirks could not fail to notice, I’m sure. 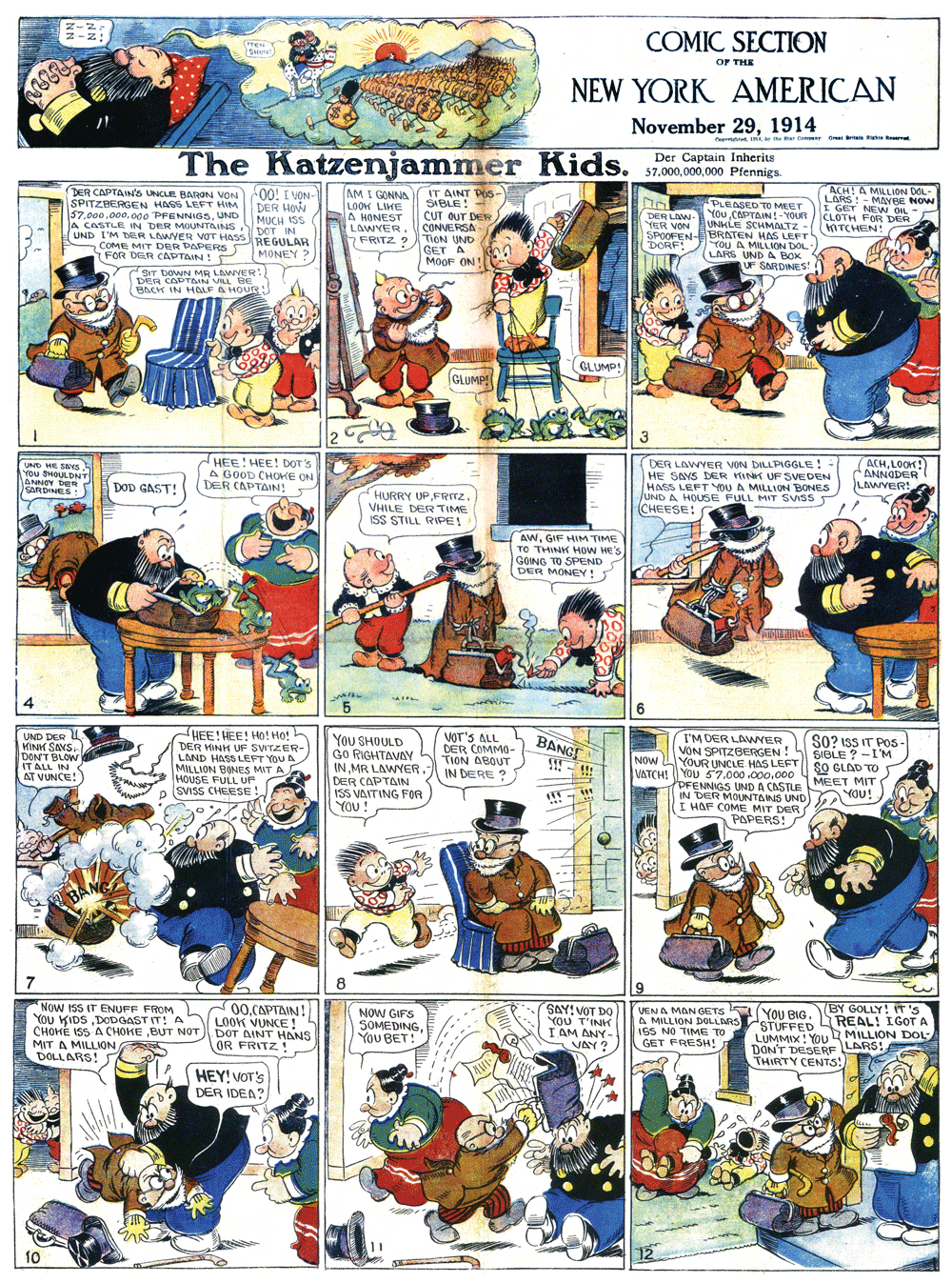 Harold Knerr’s debut page. He would draw the KATZENJAMMER KIDS from then on until his death in 1949.

Thanks for your support, I try to keep it interesting. There is all kinds of fascinating things in the KFS world still to come.

Hope you saw the interview with Mr. Rose from last week, if not, click on:

To answer your query: No, we do not receive royalties from the Google company. As for the CALVIN AND HOBBES reference, specifically, it doesn’t mean anything. I also suggested we should rename BEETLE BAILEY after other names of things everybody knows, like The Battle Of Waterloo, Godzilla vs. Monster Zero or Name That Tune, but these proved to be totally incoherent and inappropriate. I’m still not allowed anywhere near Camp Swampy.