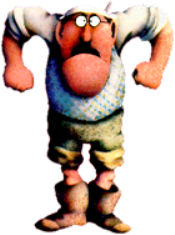 I was a fledgling cartoonist of 14 when I first became addicted to Terry Gilliam’s revolutionary, subversive and insane Monty Python animations.  More than animations, they are awesomations.

Gilliam’s voluptuous drawing style and cutout madness to me were an all-out assault on the humor centers of the mind.  Sort of like cartoon LSD.

Wasn’t long before I was drawing characters with bulging deep-set eyes, and cutting out the jaws of presidents, popes and kings in my high school textbooks making them talk like a Python cartoon, and filling notebooks with mazes of plumbing fixtures.

I even begged my parents for a very expensive airbrush for Christmas, which I still have (though Photoshop is much less messy and doesn’t clog).  I think they were hoping I might give up the cartooning stuff (plus my habit of committing Python sketches to memory) and start a lucrative business airbrushing ocean waves and dolphins on the sides of custom vans, which was really popular at the time.

I don’t remember why I never fully pursued animation (too much work, most likely), but soon my cartoons found their way into print — and even today I still find bits in them here and there inspired by Terry Gilliam’s unhinged output.