For all you avid BARNEY GOOGLE AND SNUFFY SMITH fans, you already have seen that this is an unusual week in the strip, where Barney pays a visit. If you aren’t a fan, you may think the appearance by a strip’s lead should hardly be special, but in this case it has been like this for many years.

And by “lead,” I am going by the name that the strip has had since the 1930’s. Barney’s name still takes precedence in the couplet. Back in the 1920’s, Billy DeBeck’s BARNEY GOOGLE was a huge success in every sense, including licensing. He had shot to the top by offering a strip that gave readers his slangy, unsentimental brand of humor and stayed fresh by making changes in the cast and locale every so often. Barney started out as a gag-a-day about a little man with a large bullying wife, with the world at large seemingly against him — yet you would have little pity for him because he was just as bad to the world at large! Very funny slapstick stuff, but DeBeck was never one to let something go stale. He changed the premise in the strip’s third year (1922) to a continuity strip when Barney acquired Spark Plug, the unpredictable race horse. Barney rode Sparky, so to speak, through many races won and lost, through adventures in all kinds of big cities and out-of-the-way dumps, acquiring and losing various semi-permanent characters, and finally exhausting the whole racehorse scenario in 1934.

That summer, Barney traveled to hillbilly country, where Sparky pretty much just stopped showing up, as Barney got involved with the colorful residents. One of them was a right ornery uncle of a temporary character who was threatening to bust up a wedding, that being Snuffy Smith.  The man was so mean and antisocial, he had unlimited possibilities as a match for the more worldly Barney, and they have been together ever since. But it has been a truly off and on friendship.

Debeck had Barney stick around in the hills for some time, but Smith would follow him to the big city, where his love of corn squeezins’ and firing his shootin’ ‘arn caused many fiascos for our hero. World War Two put them in uniform, with Barney in the Navy and Snuffy in the Army, which is where most of the strip took place. By then, I think, Debeck was perhaps seeing Barney as a bit played out. He, his assistant, Fred Lasswell, and the fans were much more interested in Snuffy and how he was adjusting to camp life. Debeck died in 1942, when Lasswell took over the strip, and Barney started making fewer and fewer appearances. Illogical ones too, because Barney, the sailor, had to keep returning to the Army base to see Snuffy! Clearly, the strip had completely changed over to a hillbilly saga. Lasswell himself identified with Snuffy, regarding himself as the Snuffy character, and DeBeck as Barney. 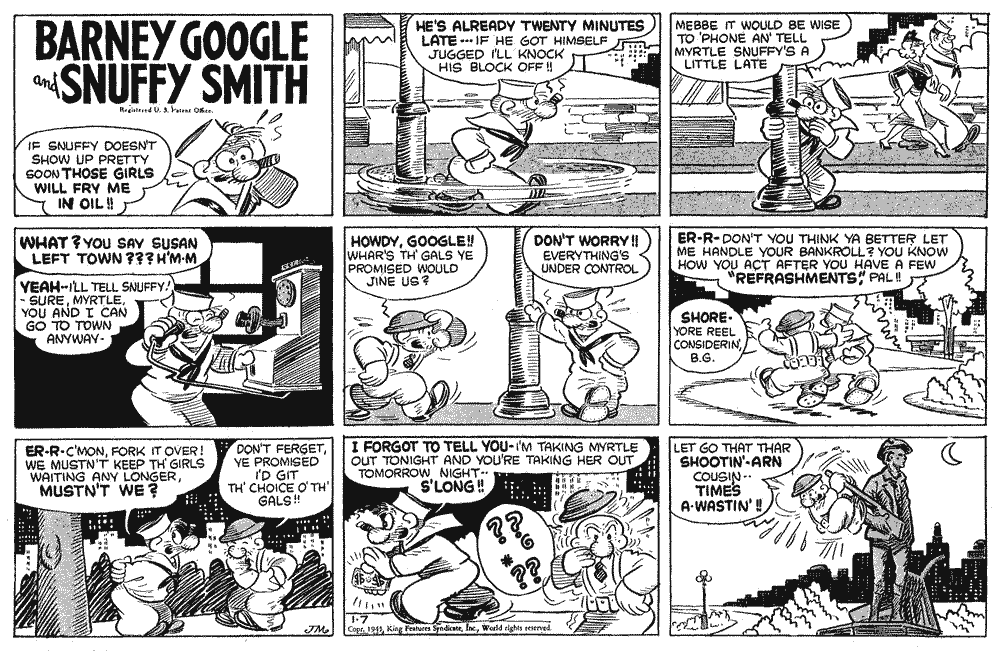 January 7, 1945: a War-time Sunday by Joe Musial, who briefly took over the strip while Fred Lasswell served in the Army.

Through the following decades, Lasswell continued to use Barney very infrequently, concentrating more on the mountain folks he loved and expanding the cast as he went. Barney Google’s appearances would sometimes come down to one daily a year, sometimes a variant of the same gag two years running, and sometimes none at all. It would seem that the character would be seen only as a legal obligation to show that he was still being used, and so Spark Plug would also be present for these rare drop-ins. 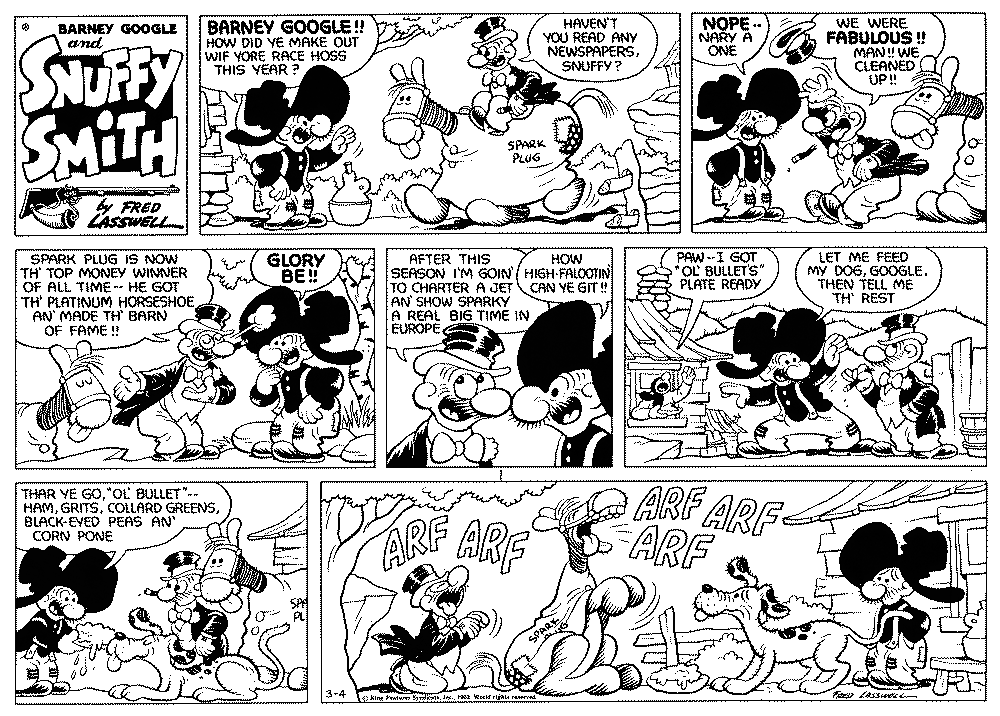 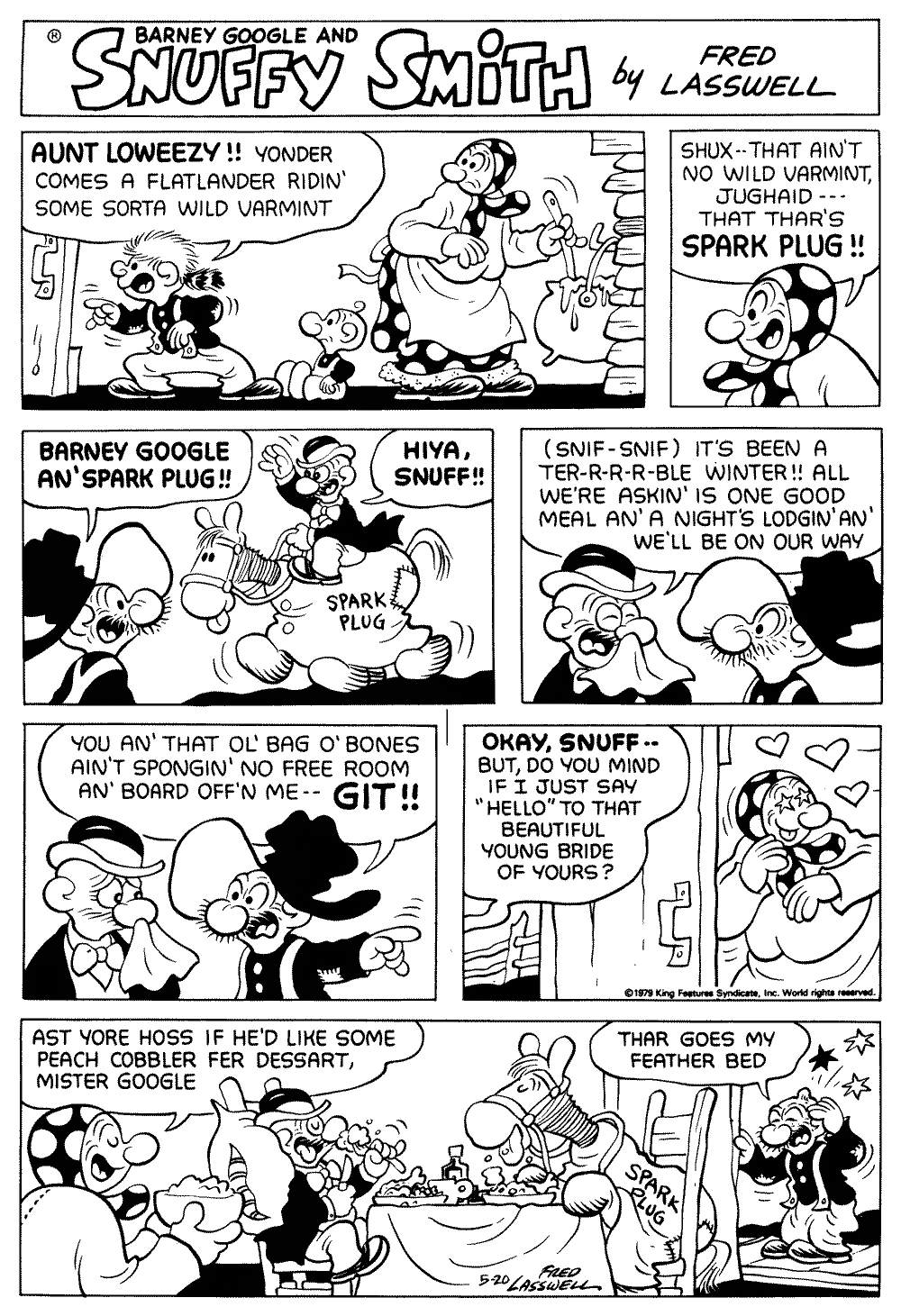 Today’s Barney/Snuffy helmsman is John Rose, who has kept up the tradition, though he has been a little more generous with the Google visits, which took place twice last year, and is taking place now during the week of May 6, 2013.

The last time Barney showed up was only five months ago.(December 8, 2012) So there you have it, the first one and the last one (for now).

I don’t know what the value of the PHANTOM wedding print is going for. It could very well be worth a C note, maybe more. It depends on how much a fan would want it and if he would pay that.

The art print market is one that waxes and wanes with good times and bad. Still, this print is 35 years old and they aren’t making any more of them, so it is a collectible item. I’ve seen the poster. In fact, I have one as well, and it is on a slightly pebbled finished, thin card stock with a nice full-color image of the art seen in the Archivist post about the great event HERE.

As George McManus’s occasional “down memory lane” type Sundays were about Jiggs and Maggie’s (and his) old Irish neighborhood days, their old Uncle Carb would probably be listening to John McCormick, not Frank Sinatra.

We don’t yet have BONER’S ARK archives up for your perusal. Maybe someday, but renaming it “Zoner’s Ark”  isn’t a really hot idea. You could get in trouble, especially with Mort. Once, I suggested we rechristen BEETLE BAILEY and call it “Calvin and Hobbes.” He yelled at me and called me names. So, we didn’t.