The strip, JUST KIDS, joined the Hearst line up 90 years ago this July, and I covered some of its history last week.

There is a very memorable part of the story that we will look at today: the Just Kids Safety Club.  This was a great early newspaper promotional tie-in with a strip and garnered much goodwill for newspapers that participated.

Ad Carter’s primary fans were younger readers who could identify with the series protagonists: Mush Stebbins, Marjory Jones and Fatso Dolan, etc. He would add little reminders about crossing the street in the strip, even if it was just two background characters talking away from the main action. He had two young children of his own — a daughter named Eileen and a son named Wallace, who were both grammar-school age in the late 1920’s, so traffic would naturally concern him. This led to the Safety Club.

All the details were worked out in advance, and by March 1928, the promotion began, first by having Mush get hit by a truck, apparently not looking both ways before crossing a busy street in the mythical town of Barnsville. Poor Mush was taken home, where he recovered slowly.  I have remarked about the gentle, uncomplicated tone of the strip. This most dramatic moment was handled the same way, with the accident and doctor’s scenes pictured with the action obscured so the sight of Mush hurt would not disturb tender sensibilities. The lesson about careless street crossing was there, though. 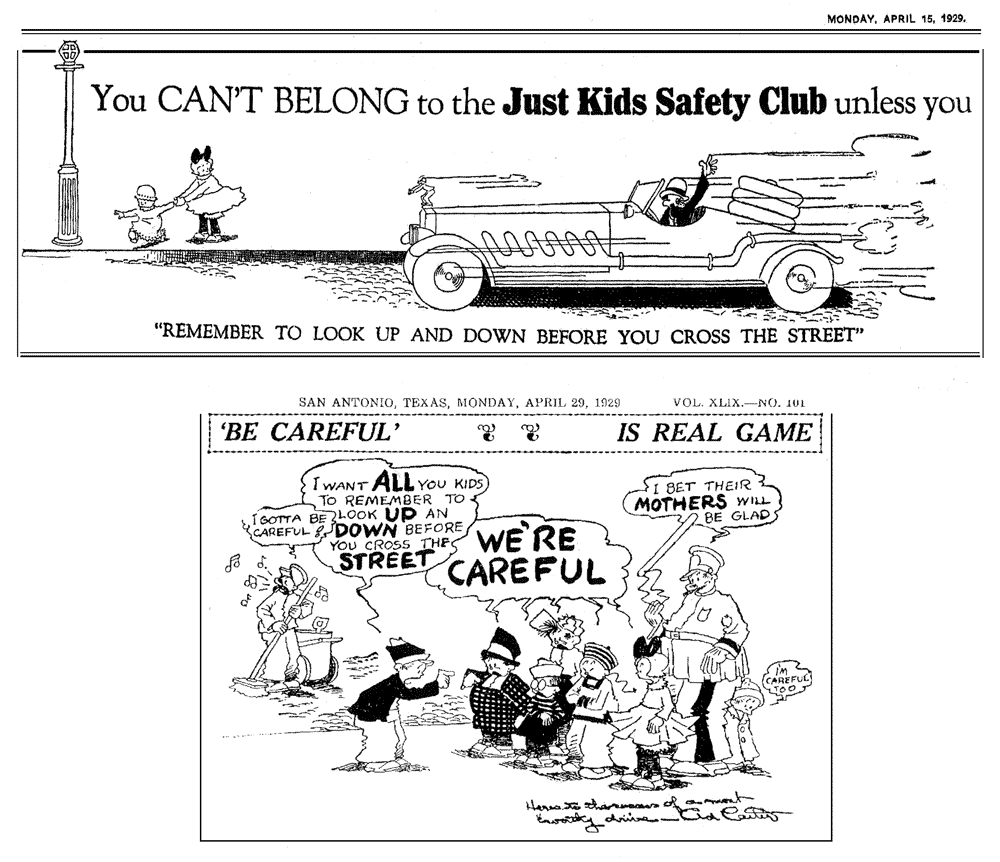 By the end of the month, the promotion began in earnest, with client newspapers offering membership in the new club. Some newspapers were talking about the Safety Club before Mush’s accident, but it would make more sense if they had not jumped the gun. A member had no dues to pay, all he or she would have to do is send in the filled in application blank that the paper would publish. These would have a pledge the child would solemnly agree to, which was:

To be alert, keen, self-reliant and always REMEMBER TO LOOK UP AND DOWN BEFORE CROSSING THE STREET.”

A parent would have to endorse it, and then send it along with a self-addressed envelope. Soon, the lucky boy or girl would receive a membership certificate and a  button with one of the Just Kids and the name of the newspaper on it. The characters would cheerfully proclaim “I’m careful,” one of several mottos used.

Some examples of the Just Kids Safety Club buttons. These were a huge success with fans. Now, nearly ninety years later, thousands of them survive. 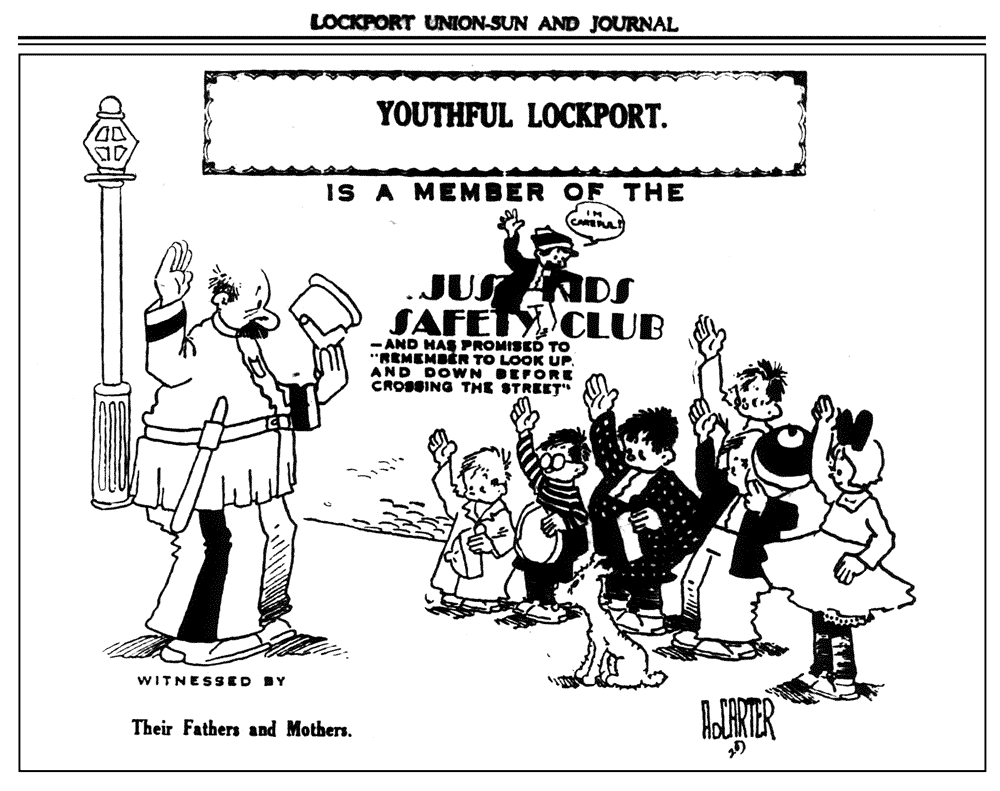 This is what the club certificate looked like, though the Lockport Union-Sun Journal altered it for a story illustration.

The appeal was terrific! Kids clamored for the buttons, often overwhelming the supply that newspapers had to send out. It was a winner for adults too, and it got the full roaring twenties-style ballyhoo. Civic organizations and public figures from fire chiefs to governors endorsed the campaign, as well as famous people anxious to get in on the publicity, like Boy Scout pioneer Dan Beard, ex-heavyweight boxing champ Jack Dempsey and Democratic presidential nominee Al Smith all getting in on the proceedings. All of them received a button (even though members were supposed to only be fourteen and under) and some photo face time.  The Postmaster General , Walter F. Brown, endorsed it. Teachers saw the club’s educational benefits, and would sign up all of their students. New members would see their names and addresses proudly printed in the newspaper’s columns covering the club. 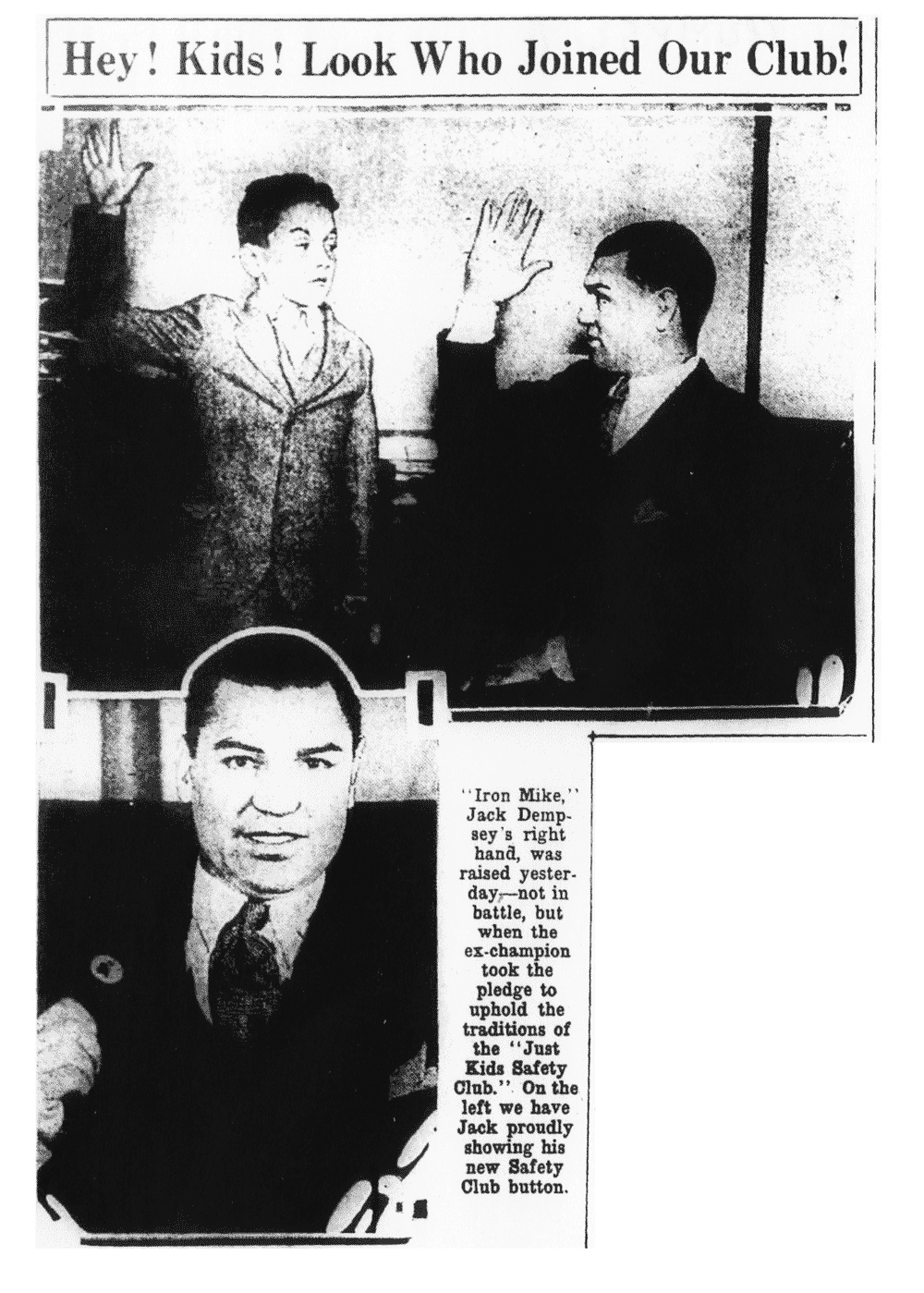 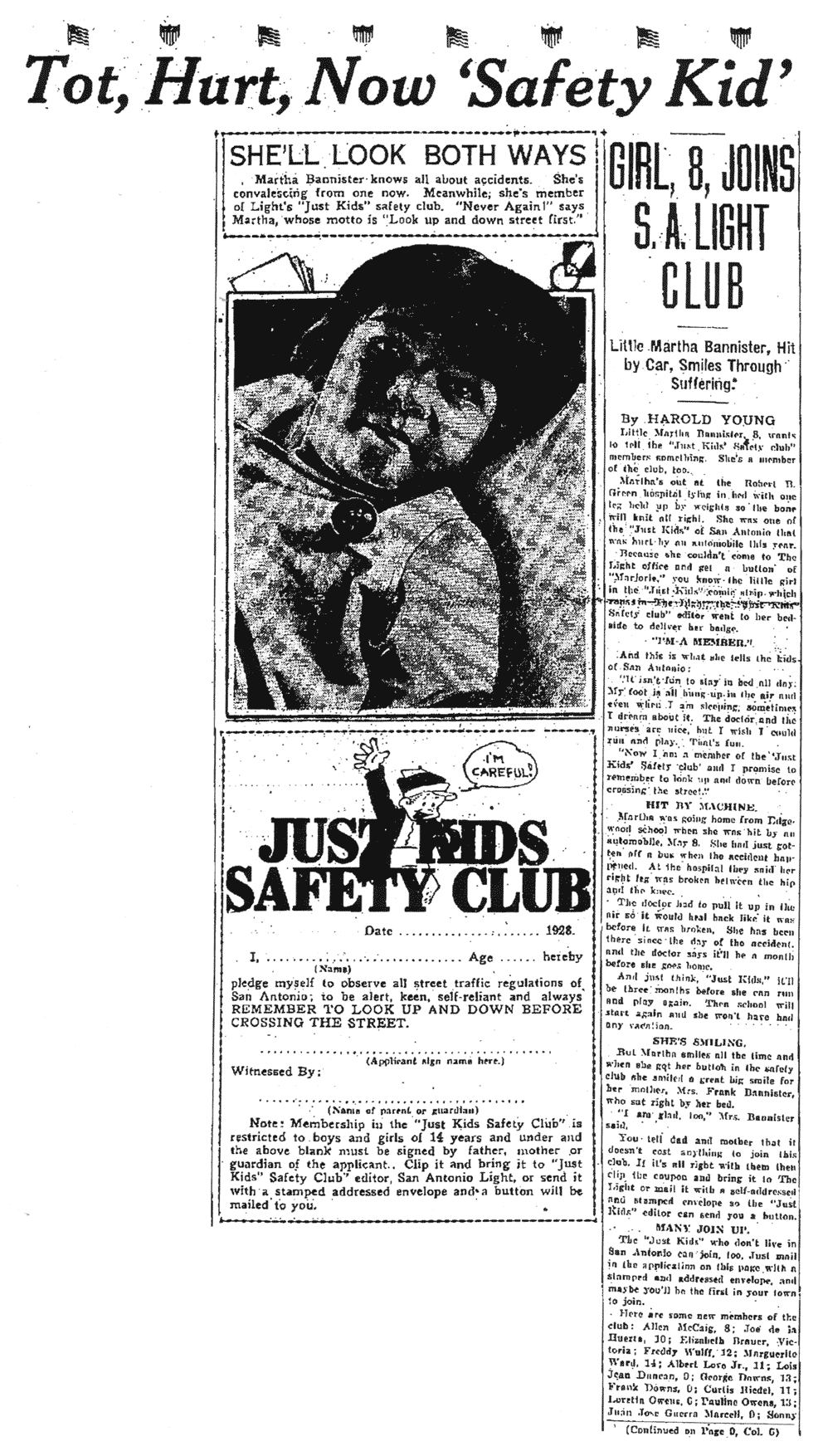 More than just a public service stunt, there were actual club meetings and activities. One club even had a film made of their members acting out a “Just Kids” story. Carter himself made public appearances to address the constituents.  In the end, the Just Kids Safety club lasted about three really active years, and seems to have just wound down in the early thirties, its’ novelty or ability to further interest the public had evaporated.

I might do an entry later this year on Jim Shepherd, who was the publisher of, and number one PHANTOM fan in Australia. I knew Jim, and for many years, he was a drinking/eating buddy of mine.  Last September, I showed off the cover of the first PHANTOM comic book that Jim’s firm, Frew, published back in 1948. See it HERE.

Mr. Reale recalls a strip in the Sunday Journal American (the Hearst flagship paper here in New York) which featured characters who lived in the depths of Hell that both scared and amused him as a child in the 1950’s.  He needs to know the name of this odd premised series.  Well, I can assume you are referring to the one and only Jimmy Hatlo’s add-on panel to THEY’LL DO IT EVERY TIME,“THE HATLO INFERNO.” Check out a sample in one of my Hatlo entries HERE.