These past few weeks, we have looked at a few panels, both good and bad. Today, we will see yet another long-lasting entry, TRUDY, by Jerry Marcus. TRUDY ran from 1963 to 2005. 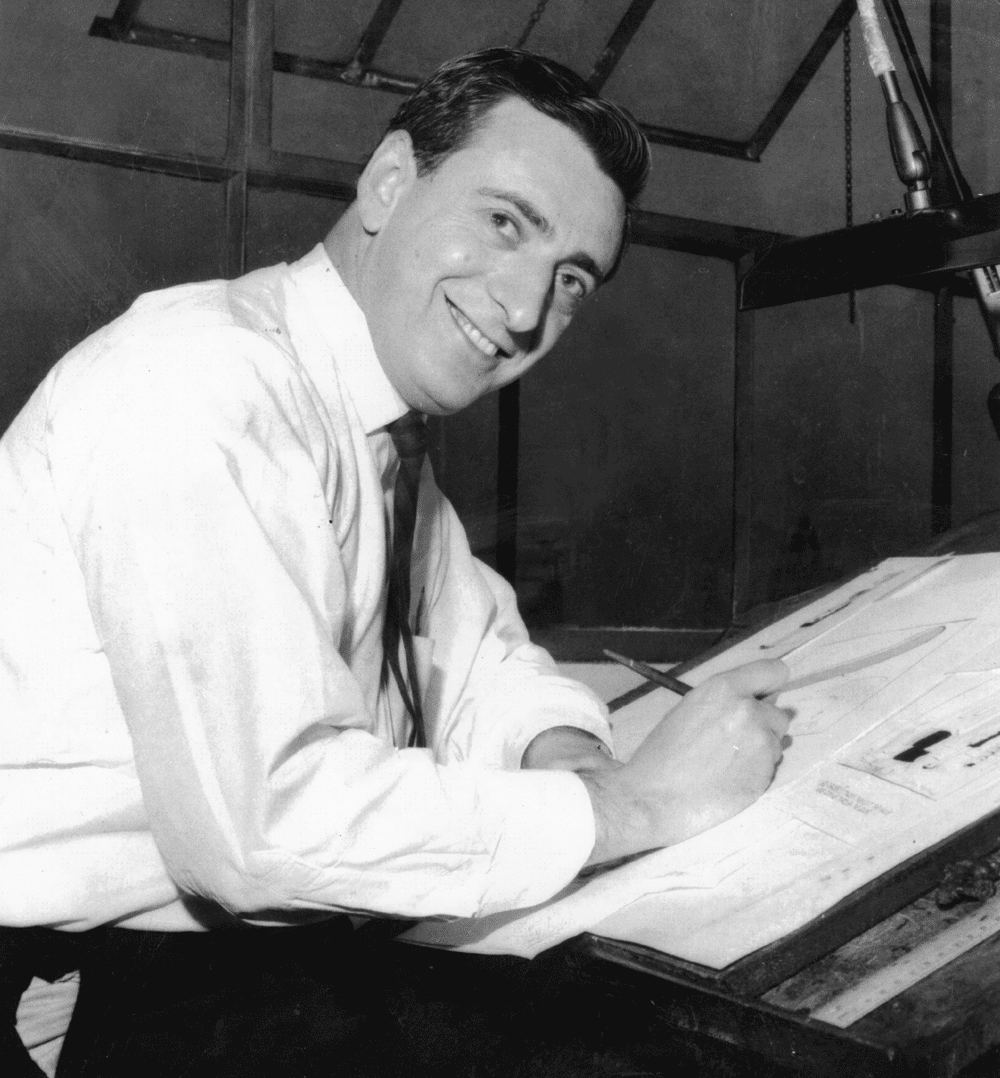 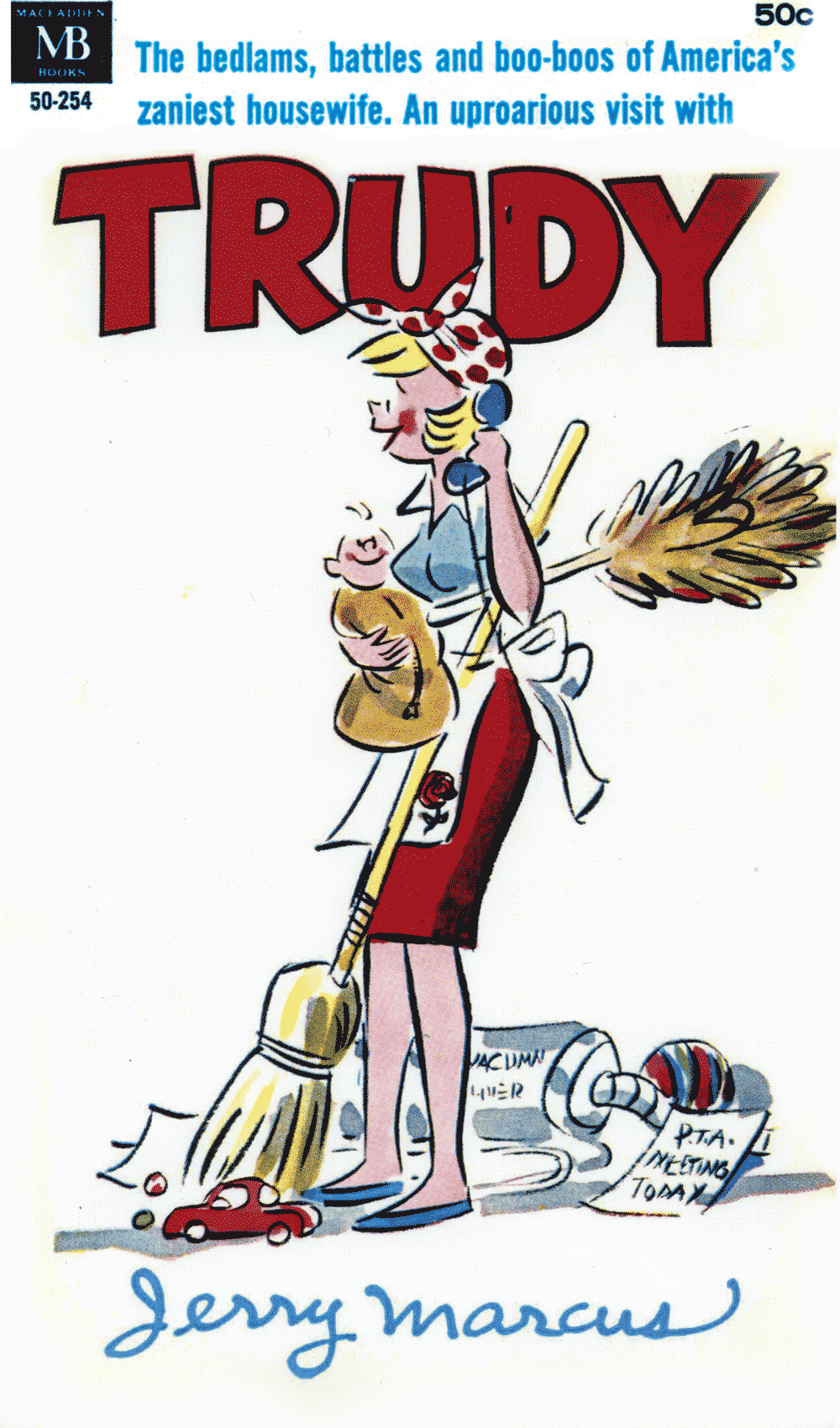 A TRUDY paperback collection put out by MacFadden in 1965.

Trudy was an ideal of domestic tranquility, the great American homemaker. Her busy days were filled with housework, shopping, neighbors and generating laughs—or attempts at laughs. At first, she had freckles, so maybe Marcus pictured her as the ultimate all-American girl of that time, Doris Day. Her cast mates were her husband, Ted, who had a generic office job; a son named Crawford; a baby (who I don’t think had a name, but was written out of the series early on.); and a sheep dog named Rodney, reminding one, maybe, of the same type of mutt in Please Don’t Eat The Daisies (1960), starring Doris Day as the frazzled housewife. 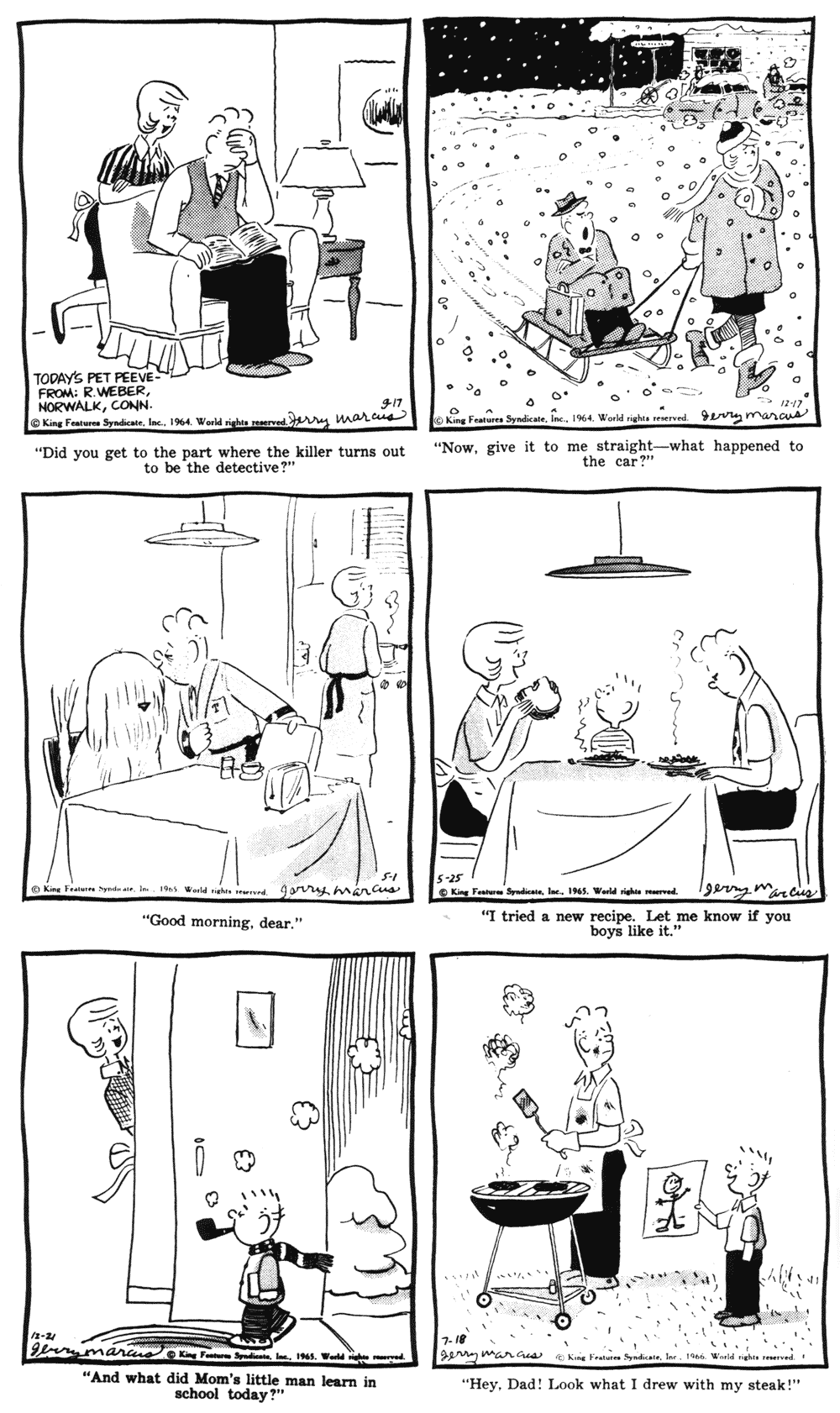 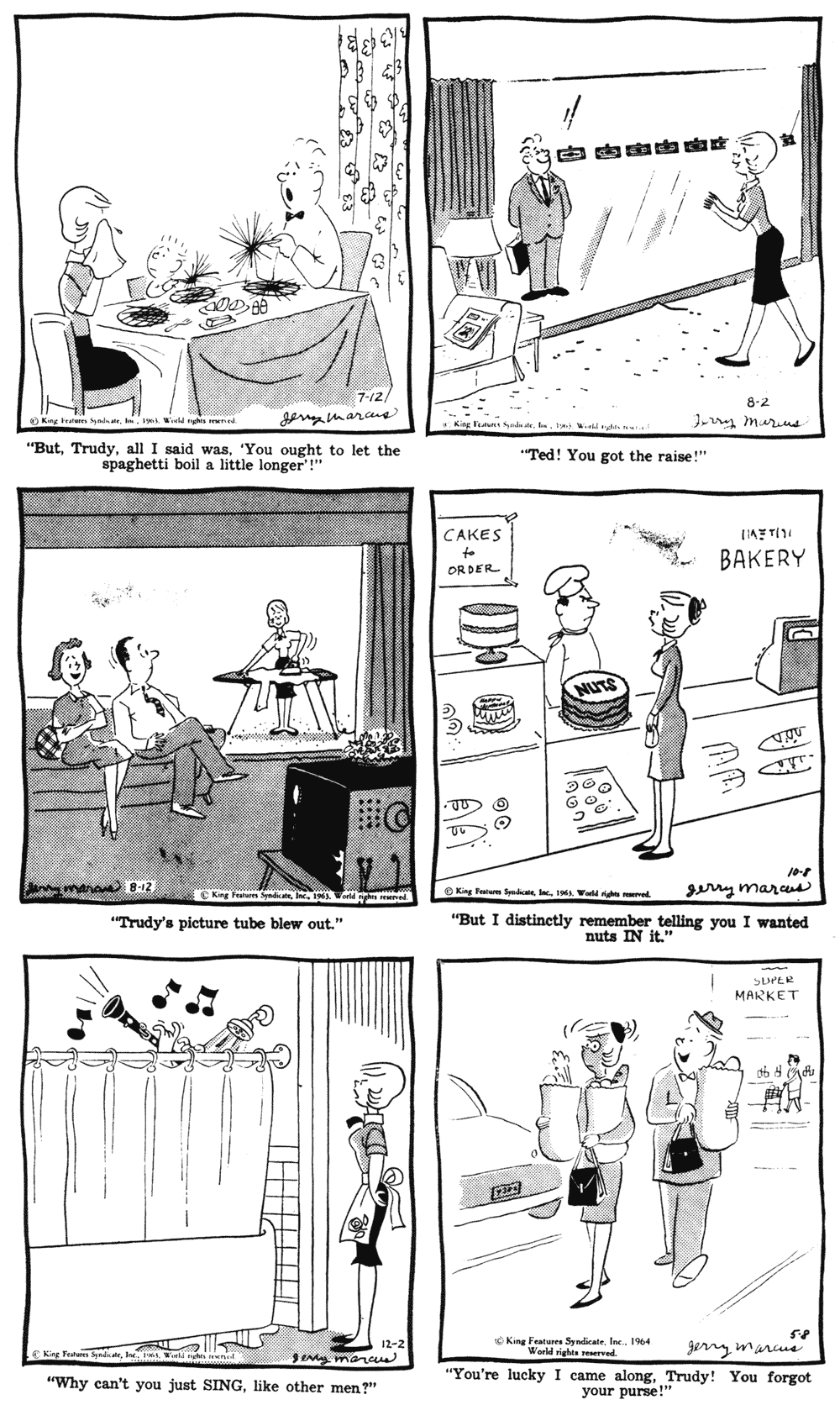 A Sunday was added in 1966 and discontinued in 1996. For some reason, TRUDY went from panel to strip size, but only for a year and a half from 1968-69. This might have been a first in comics strip history.

Also, in 1968, a neighbor, Mrs. Nozie, was added. She lived to borrow and eavesdrop, nearly always dressed in a bathrobe and curlers, with a cigarette hanging off her lip.

“Fatkat” was probably the most memorable character of all, having been first seen in 1973.  At first, he seemed impossibly huge and not quite a cuddly kitty. He soon shrank down to his familiar small size, though his nose seemed to grow to potato size. 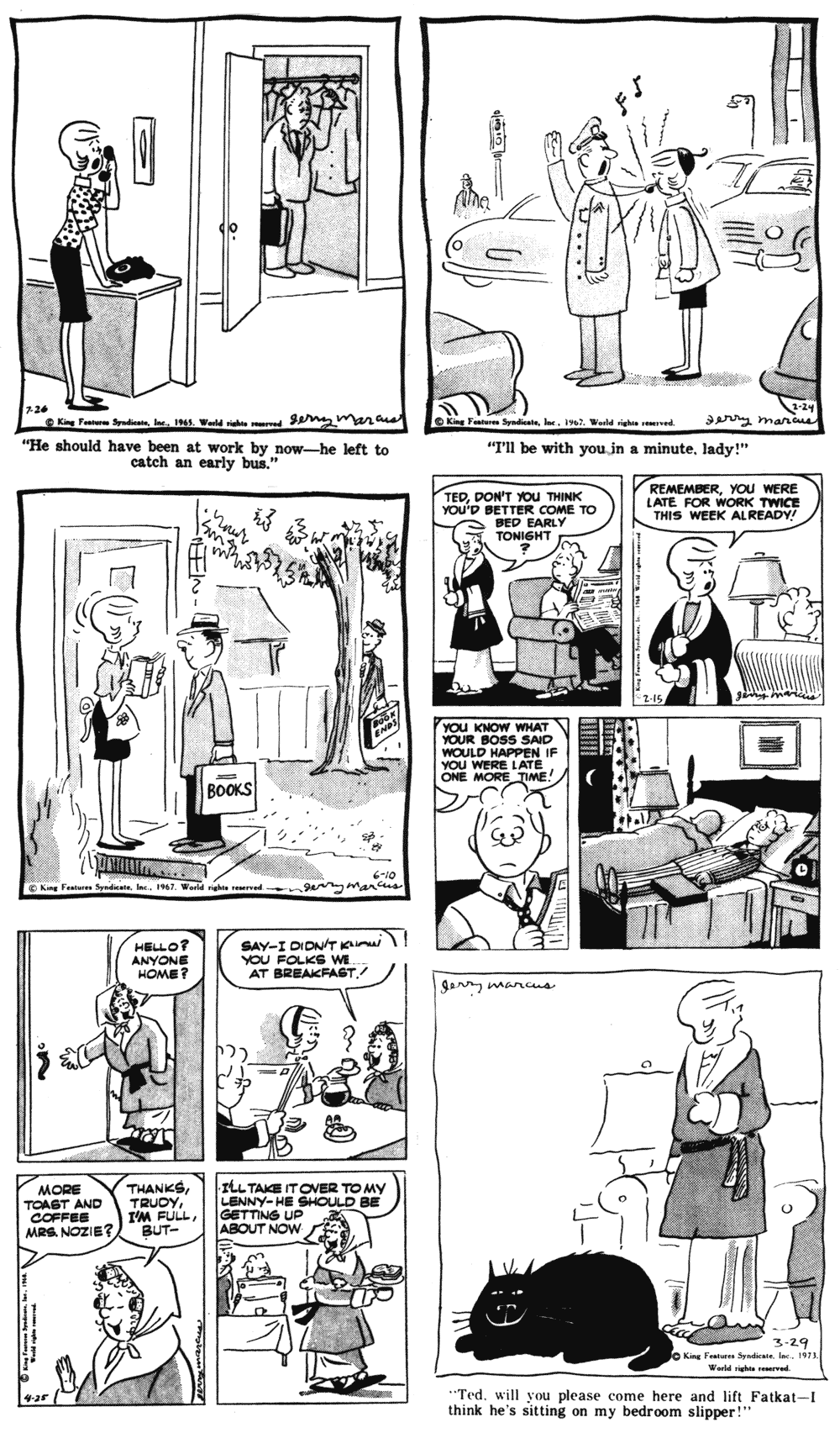 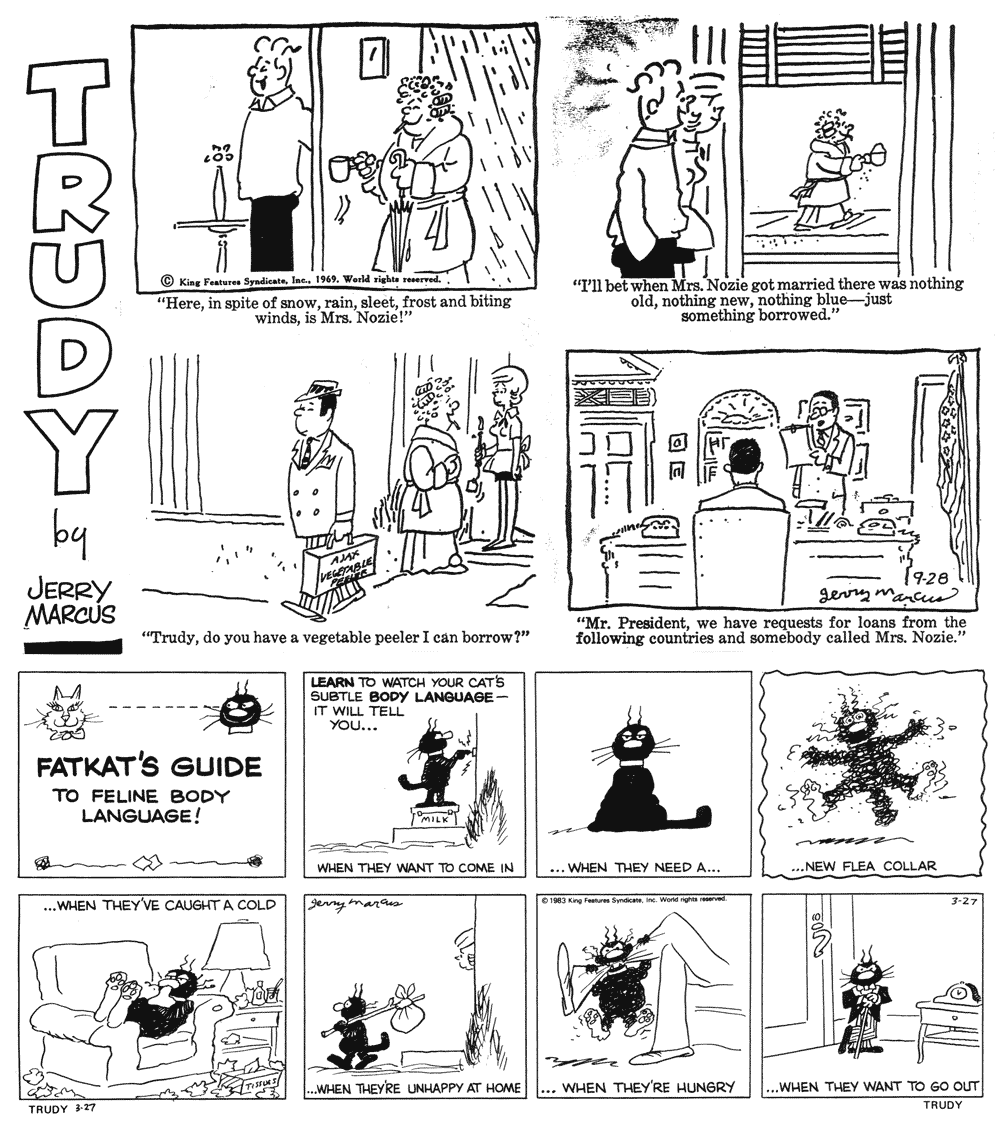 The last important addition was the grandpa in 1986, who was adept at mangling bedtime stories and giving confused advice to Crawford. The strip ended in 2005 when Mr. Marcus died. 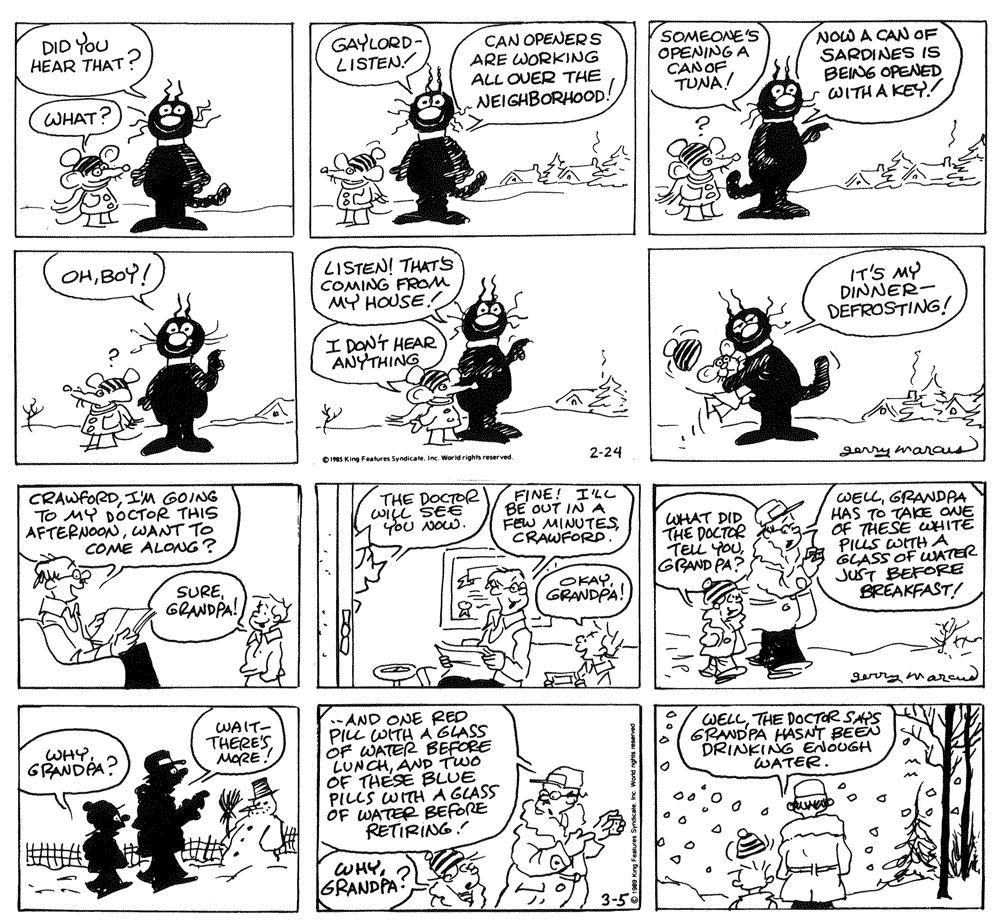 TRUDY had a long run; 42 years is a very healthy span in the world of modern newspaper publishing. But, as a serious strip reader these many years, I think that Marcus never rose to the level that he might have because he either hadn’t the creative power, or was  just plain too complacent, to write new material.

Now I say this because after just consuming decades of the strip, it becomes painfully obvious that he’s repeating an awful lot of the same gags over and over, starting in the mid-1960’s when the strip was only two or three years old and continuing for the remaining 30-odd years. Perhaps to fans, it’s not an important issue if one likes the strip and its creator. But, this is not an experience I’ve had too often. Maybe, I’m the first to notice.

I’m glad you like Boner’s Ark. As far as I’m concerned, Mort Walker has never come up with anything that wasn’t first class. That’s why he’s lasted so many years in the business. There’s been a few Boner comic books put out over the years. I just checked eBay and there is a 1986 Blackthorne edition that a seller is offering as a Buy-It-Now for $100! That’s really impressive. Or maybe really crazy.

Maybe someday we’ll put Boner and his gang into the vintage mix. As for a reprint collection, well, we’re ready whenever a publisher wants to do one.

To The Fourth and Mark Kausler,

Yes, Eve was truly a beautiful, haunting creation. I’m sure that she was one reason for the strip’s longevity, and that it had many more male readers than an average soaper. Certainly all the cartoonists held Drake’s work in high esteem, as do so many readers.  It’s one of our vintage offerings—and if you admire Drake’s work as much as I do, it’s worth having. Check it out by reading The Heart Of Juliet Jones (and here are the Sunday strips).