Ask the Archivist: THE LITTLE WOMAN by Don Tobin

Sixty years ago this month, King Features launched a panel that never became a classic. But those of  us who are old enough will recall it fondly.

Don(ovan) Tobin was born in Austin, Texas. He grew up in Long Beach, Calif. and attended UC Berkeley in 1936. His cartooning talents got him an animator’s job at Walt Disney Studios, where he worked on many classic Mickey Mouse and Donald Duck cartoon  shorts, but also the pioneering features of Fantasia, Pinocchio, Dumbo and Bambi.

He left the studio after the infamous 1941 strike, and after some World War II animation projects with the Navy, he went on to create gag cartoons for popular magazines. 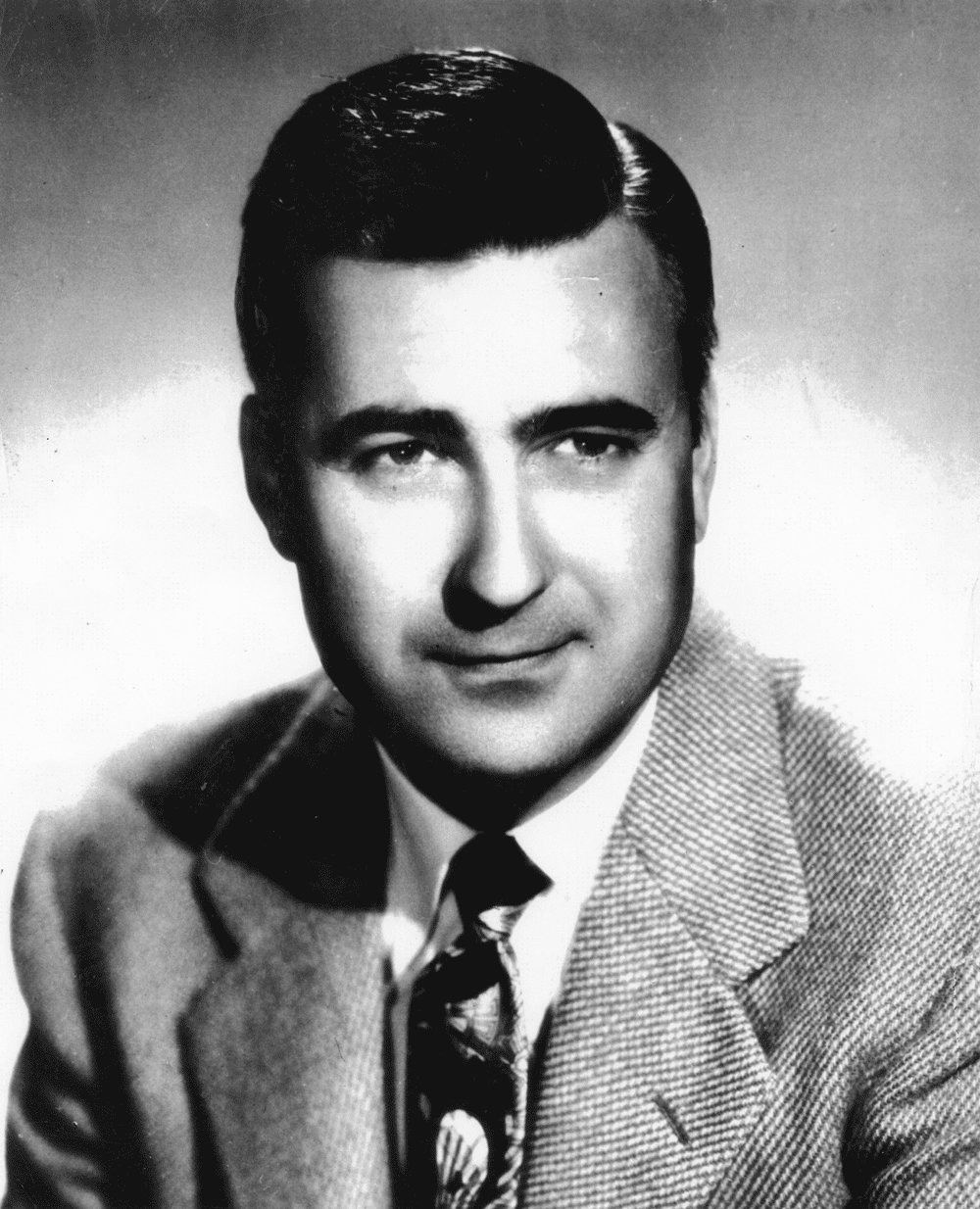 In 1953, he created THE LITTLE WOMAN, claiming inspiration from his mother-in-law. King Features liked the strip and began distributing it on February 9, 1953. 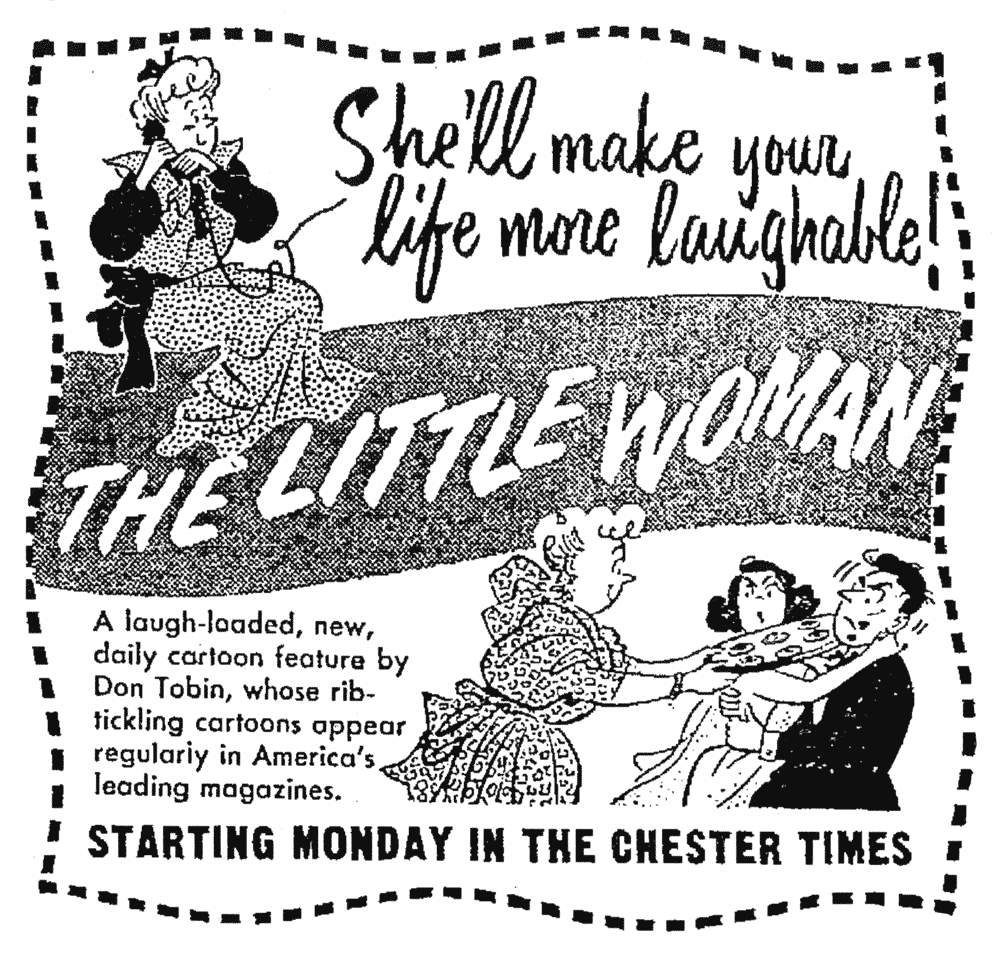 The strip was about a middle-aged couple, Herbert and Emily Butterworth, who were trying to live the ideal life in post-war America, with typical situation comedy problems arising but with wild exaggerations. Emily was a classic dumb blonde of song and story, but as a middle class suburban housewife. Emily could be counted on to misunderstand any situation, or to pressure Herbert to buy things or take her places.  One thing Tobin had an obsession with, it seems, is bad driving gags. Comical car wrecks occur quite frequently through the series. 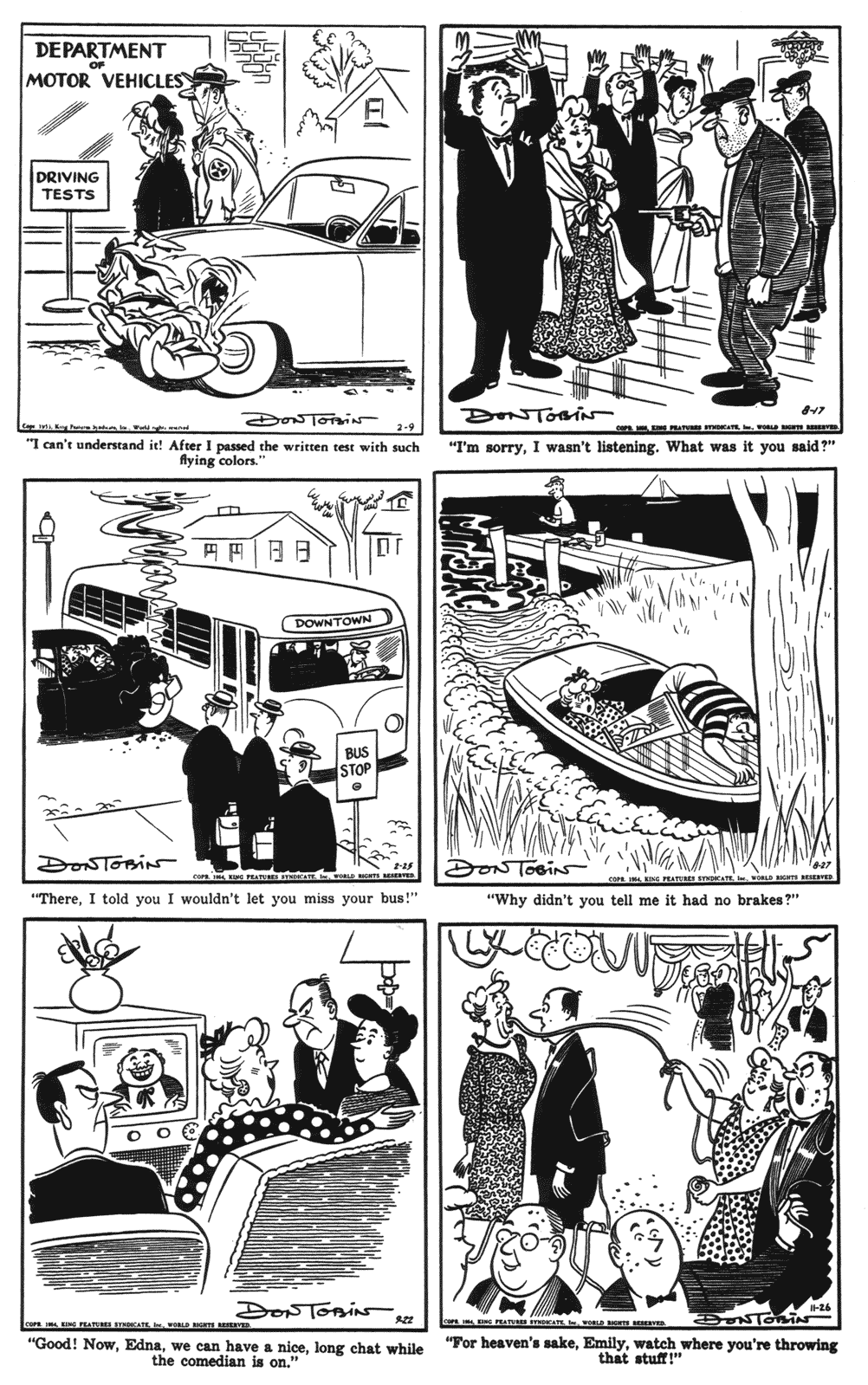 Originally, the Butterworths had a son, Junior. He was seen very infrequently in the first year of the series, literally maybe four times, then he vanished. In 1955, a new neighbor with a maladjusted but lovable little girl named “Katie” moved in, but gags for her didn’t last long either, and she stopped visiting too.  There was, at least one time, a nephew named Hector who came by, but clearly, Tobin couldn’t sustain any interest in kids in the strip. I find that unusual, considering what a rich vein of humor kids can be. 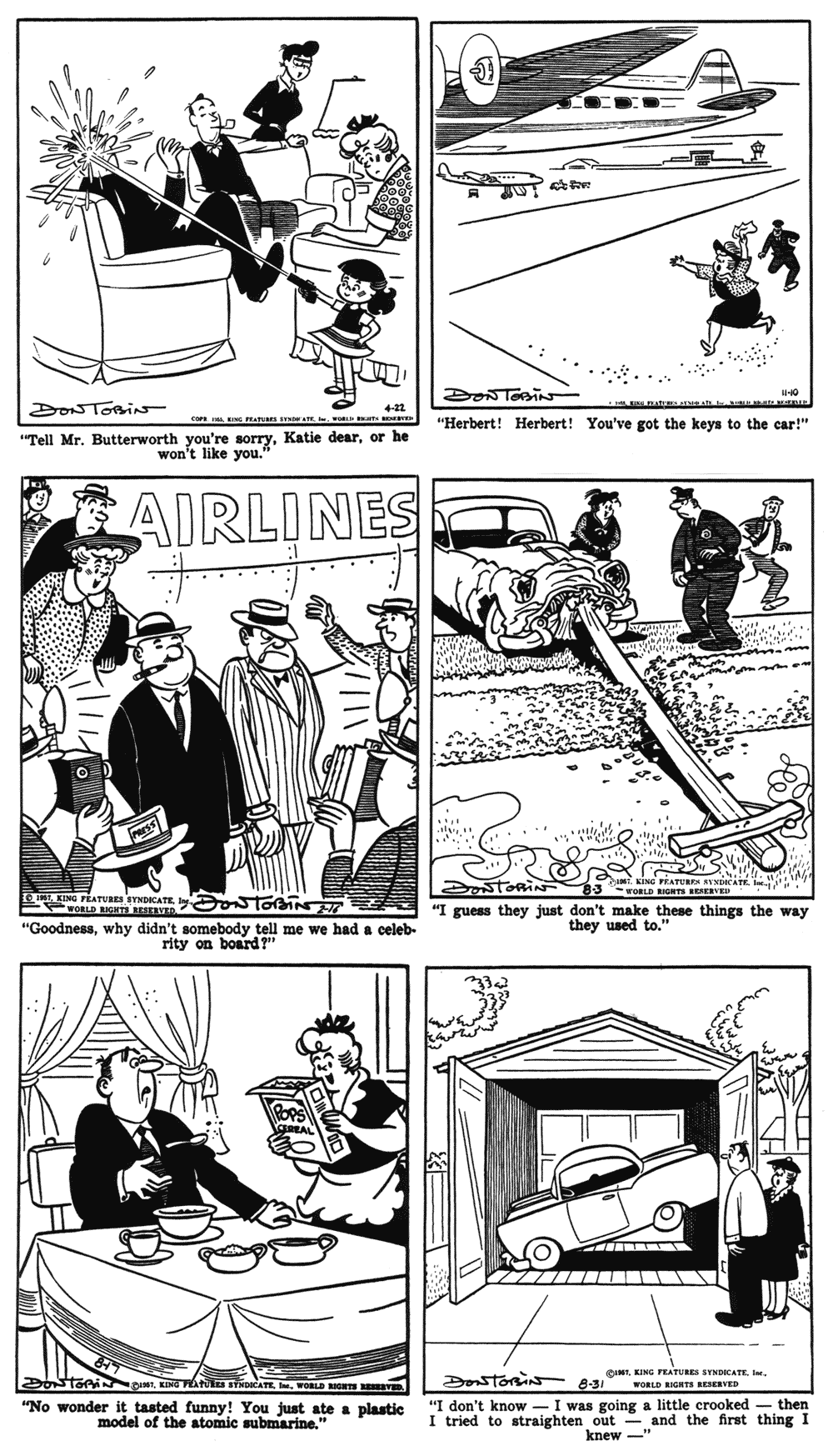 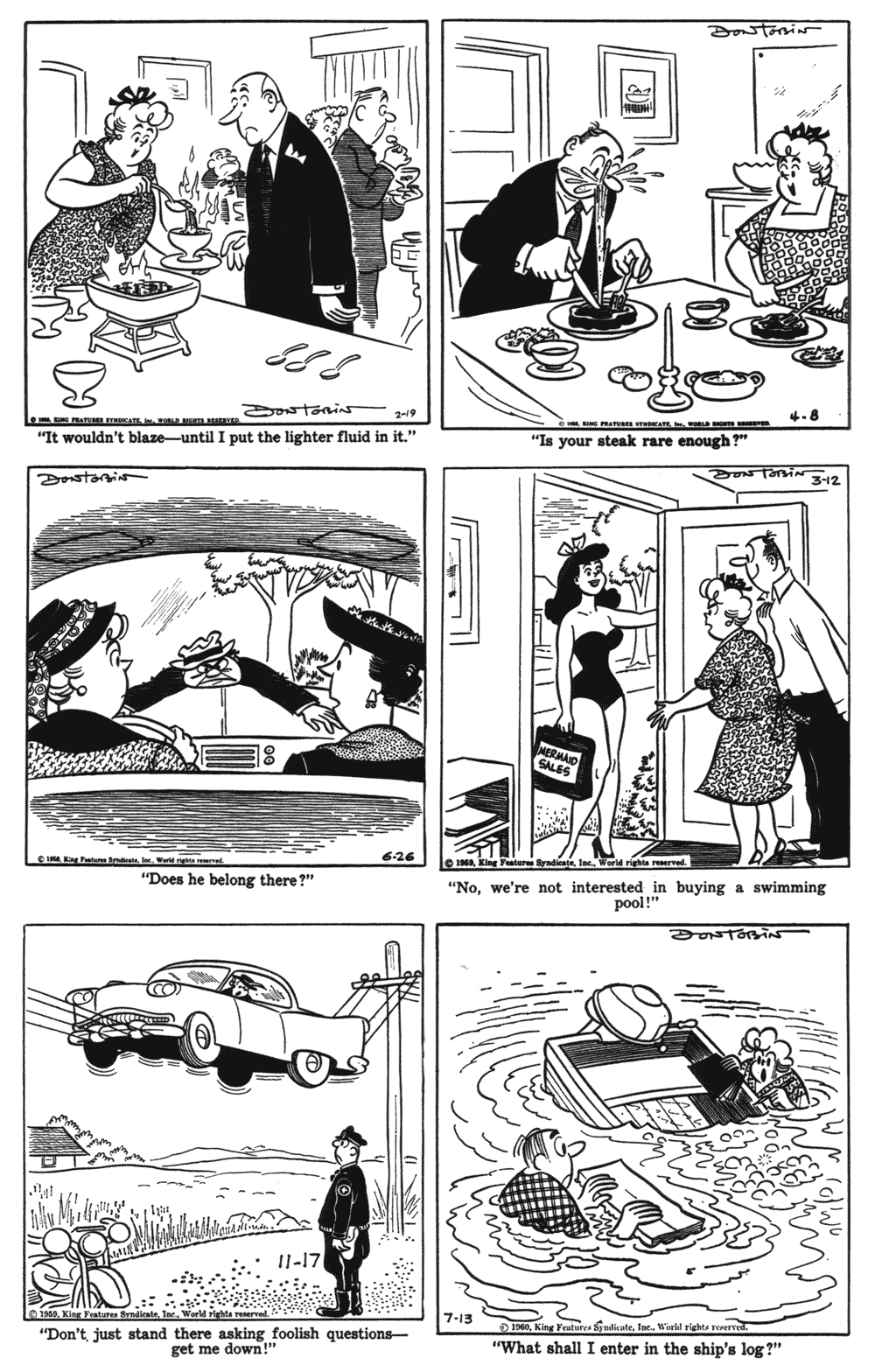 In 1954, a Sunday was added, but obviously it was not drawn or written by Tobin. Judging both, it appears to be Ralph Stein, who just didn’t understand the tempo of the strip, always opting for a big madcap riot of confusion, with the characters getting uncharacteristically angry or violent. Eventually, Tobin created the Sundays himself.

At the strip’s high water mark in syndication, it was in 224 papers, but eventually dwindled down to a very few. It was discontinued on November 15, 1982, about a month after the Sunday version ended. 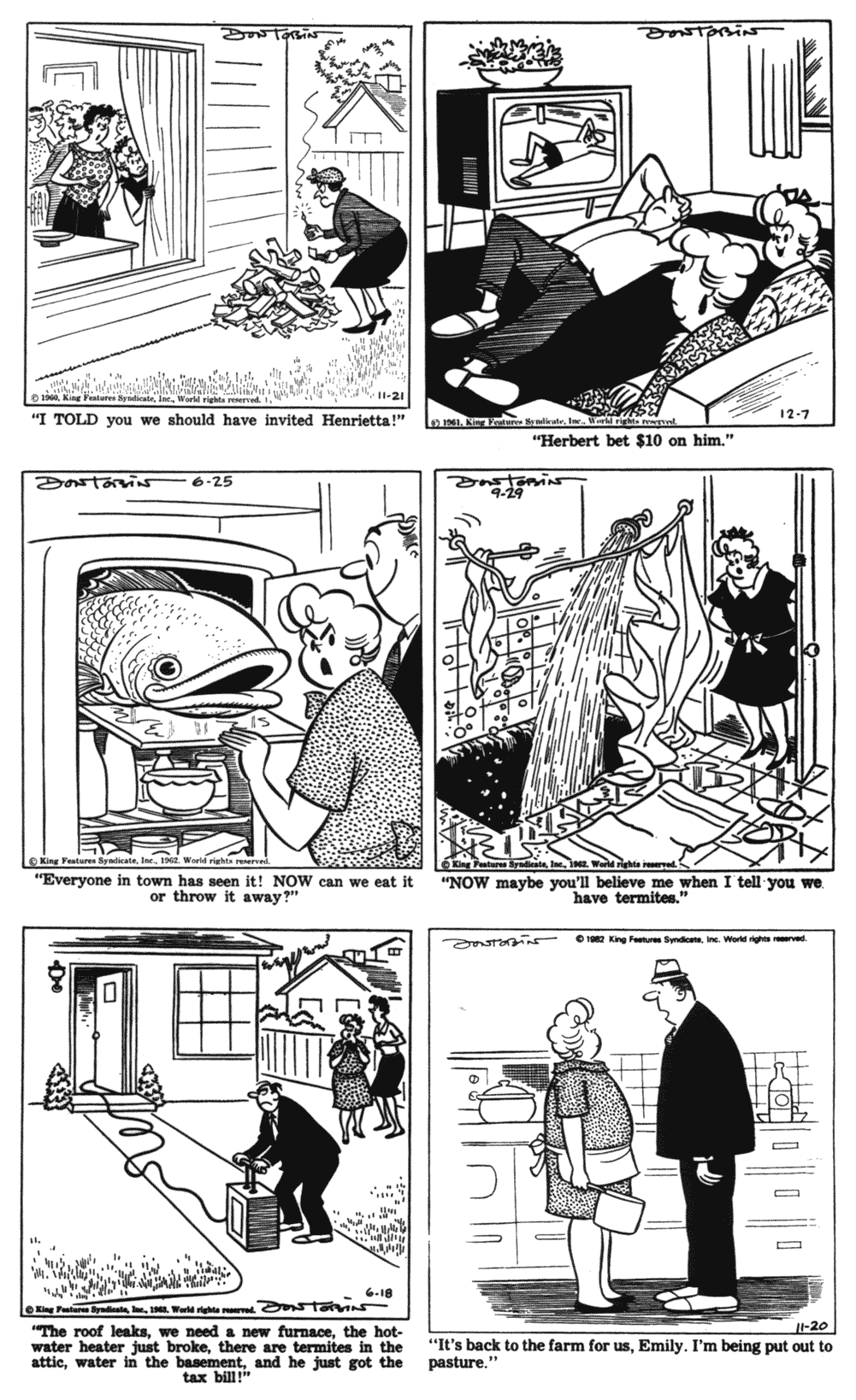 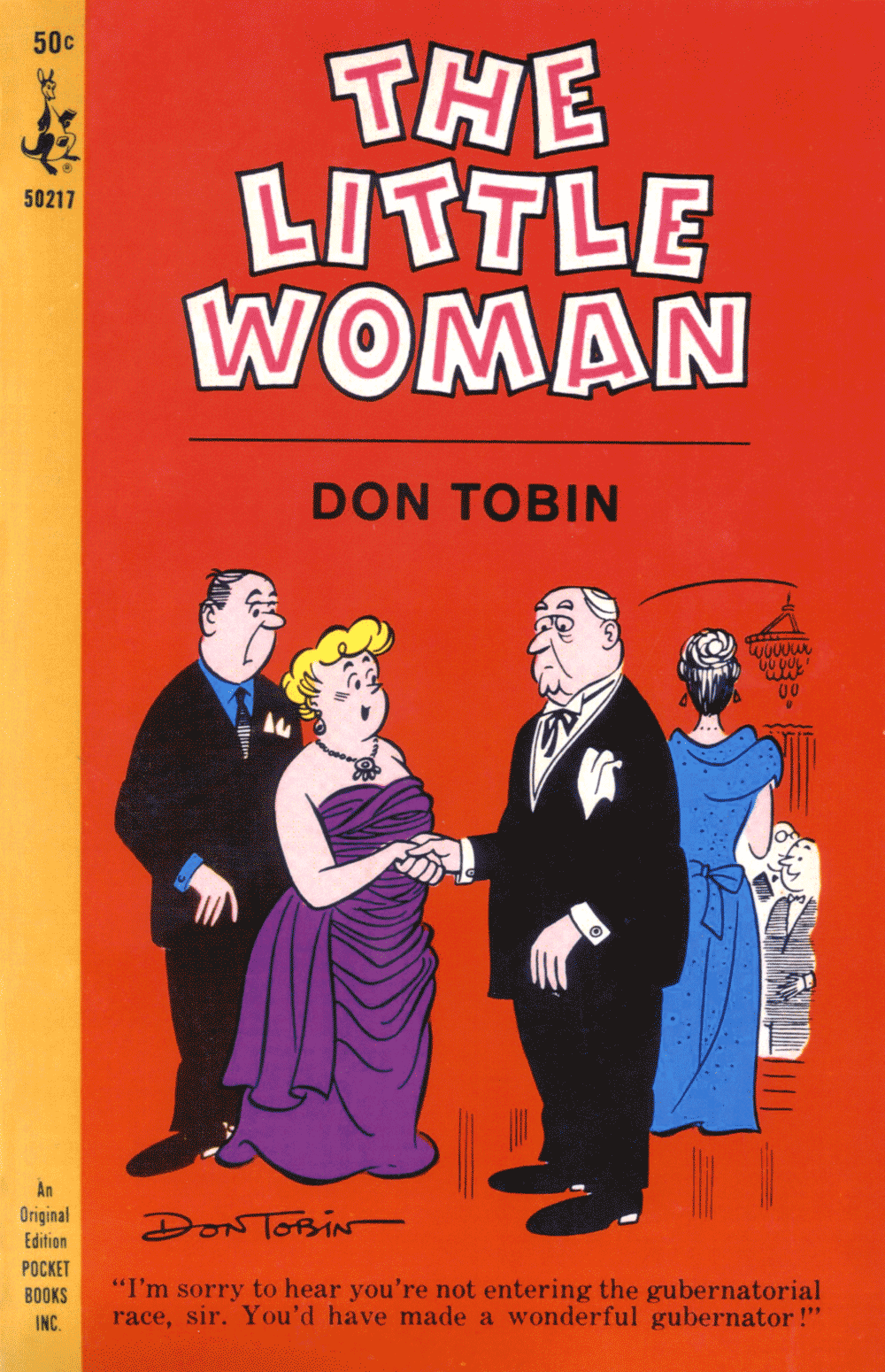 In 1965, a paperback collection was published by Pocket Books.

Last week, some readers might have sent in unfavorable comments for posting Sunflower Street because of its reputation, but you were all thoughtful enough to see it in its proper historical context, so thank you.

You know, it occurred to me that the characters resemble some of the cartoon creations that populated some of the black-created strips for the several all-black syndicates of the time. The sentimental, soft-edged content of Sunflower Street wouldn’t be too out of place there, either, but the dialect would certainly not be.

RE: EVER HAPPEN TO YOU?

Blake’s panel was originally addressed as being in the same genre as the aforementioned Briggs and Webster efforts of the early Twentieth Century, with the interest in ordinary, everyday incidents with common, identifiable human types. But Blake went for a more dynamic sense of broad farce, a distinct break with the panelmiesters of old. In this respect, Sunflower Street belonged to that earlier era in pacing and sense of humor.

To Nick Cassidy:
Over the years, King Features, just like the other major syndicates, produced copious amounts of artwork. This would be for everything from strips and comic books to licensing art to magazine covers. All running the full range from simple line art to highly detailed oil paintings, by  artists from giants like Howard Chandler Christy to lowly, anonymous bullpen inkers.  Trouble is, for most of those years, nobody thought to hold on to it.

We’d save a stock of original art for a strip  awhile for fan requests or possible promotion ideas, sometimes the material was given away or the artist would ask for them back, as most do today, but eventually, it had to go, even if It was just thrown away. New art was always coming in to take the old art’s place. Of course, even the greatest artwork wasn’t regarded very highly after it served its purpose in those days. (See my blog of 15 February 2012 on Prince Valiant).

But just the same, there is still quite a lot of original art out there from years past, but fans have snapped them up, and subsequently their value has always increased as the supply that collectors are willing to part with diminishes.

If you have any current favorite series or gags you’d be interested in buying originals of, you may be able to do it by writing to the cartoonist in care of us here at :