Another anniversary is being celebrated at King Features this week: Twenty five years have gone by since ERNIE made its debut. Not sure you know what Ernie I’m talking about? Well, that would be understandable because ERNIE is not the title of said strip now. It became PIRANAH CLUB ten years after its launch. Nevertheless, we still look back to that day in 1988 when the comic strip started. 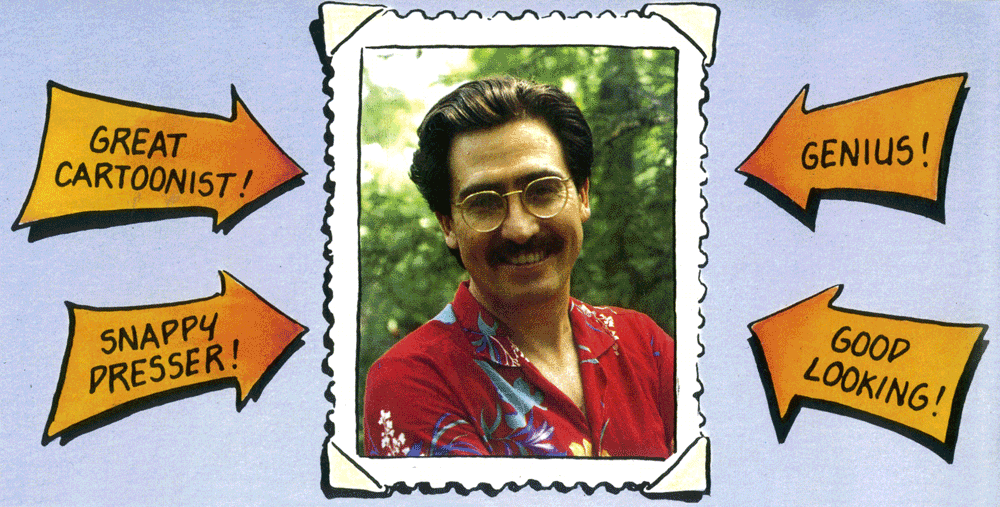 Bud Grace, sometime nuclear physicist, in the 1980’s, with some self-criticism added.

Set in Bayonne, New Jersey, ERNIE/THE PIRANHA CLUB is about life on the seedy side. Poor Ernie is a patsy for every cheat or weirdo who comes down the street. Ernie runs the fast food restaurant of your worst dreams, where every dish is centered on squid. Yes, squid. Foremost in the sleazy population is Ernie’s uncle, Sid Fernwilter, for whom no swindle is too low to go. He runs scams involving real estate, insurance, shyster law, or anything that can make an unscrupulous buck. 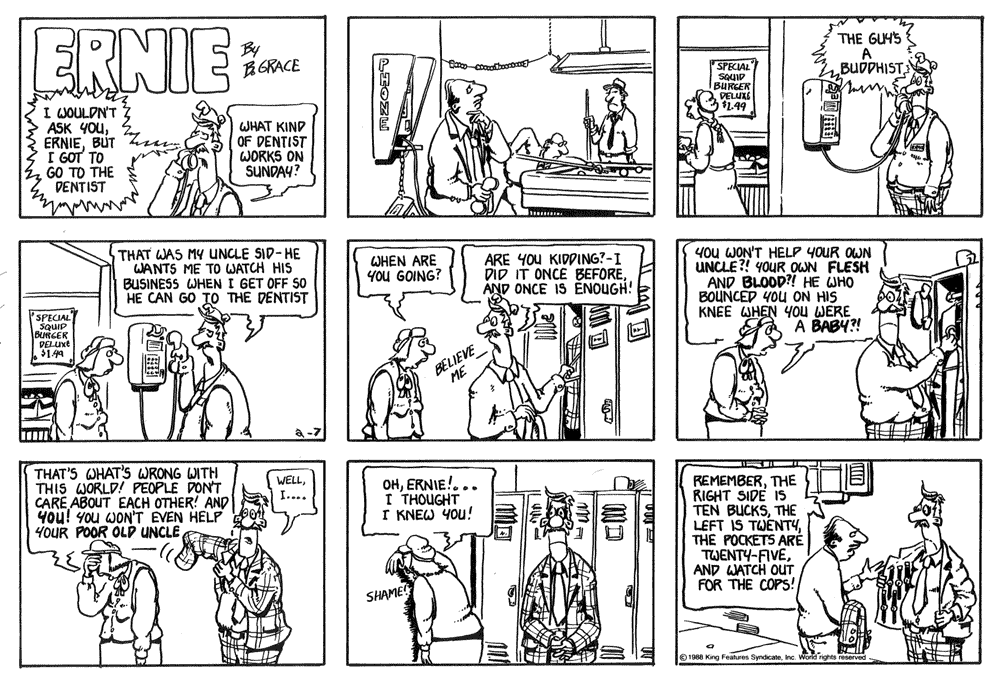 Ernie’s car is a clanky, banged up 1950’s DeSoto sedan. Ernie’s girlfriend, Doris Husselmeyer, is a heavyset girl with glasses. She could be described as a “nerdette.” She gradually has changed over the years. One who never will change is her nasty kid brother, Spencer, or Arnold Arnoldski, a pimply, frazzle-haired kid who gets jobs like sideshow freak and can be talked into dating a chicken! 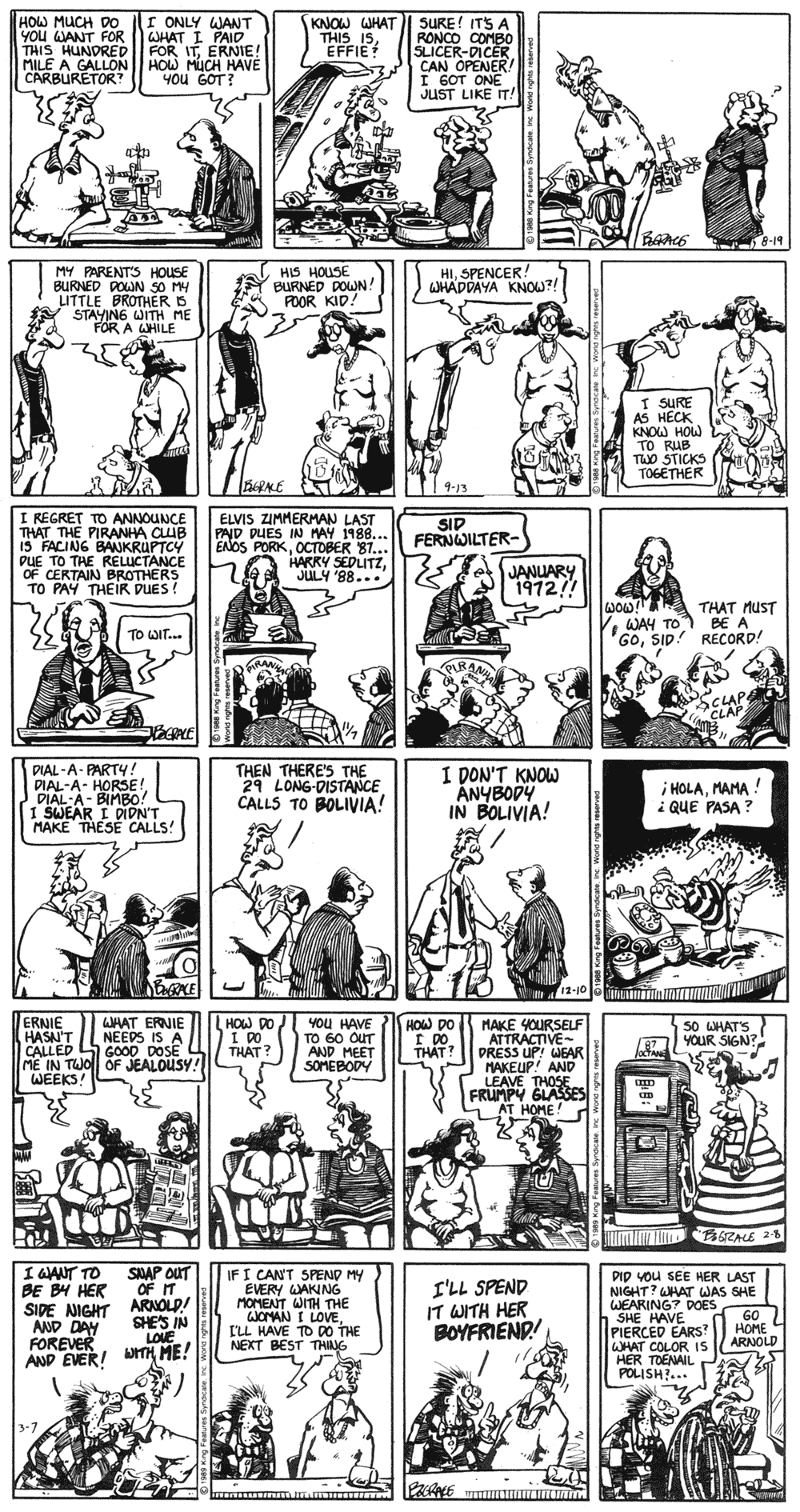 Uncle Sid is so notoriously cheap that he eats with Ernie’s landlady, Effie Munyon, just so he can get free meals. Her ghastly culinary offerings make the squid-centric cuisine at Ernie’s greasy spoon look like delicious gourmet delights. Sid and his equally mercenary friends, including the ever-unethical Enos Pork, M.D. and con man/preacher Elvis Zimmerman, all belong to the aptly named Piranha Club, where their mascot is an actual piranha fish named Earl, who is kept in a fish tank. 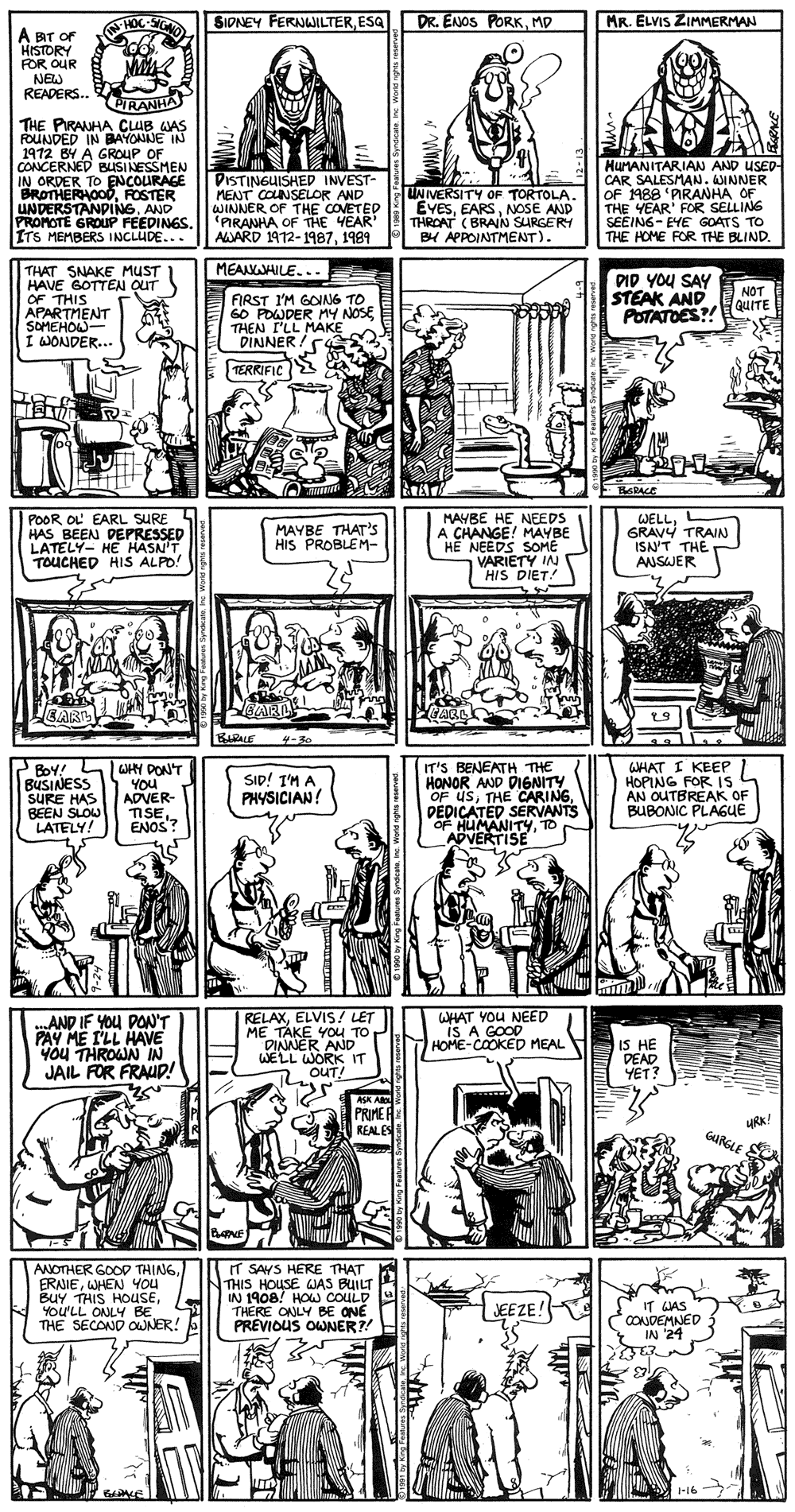 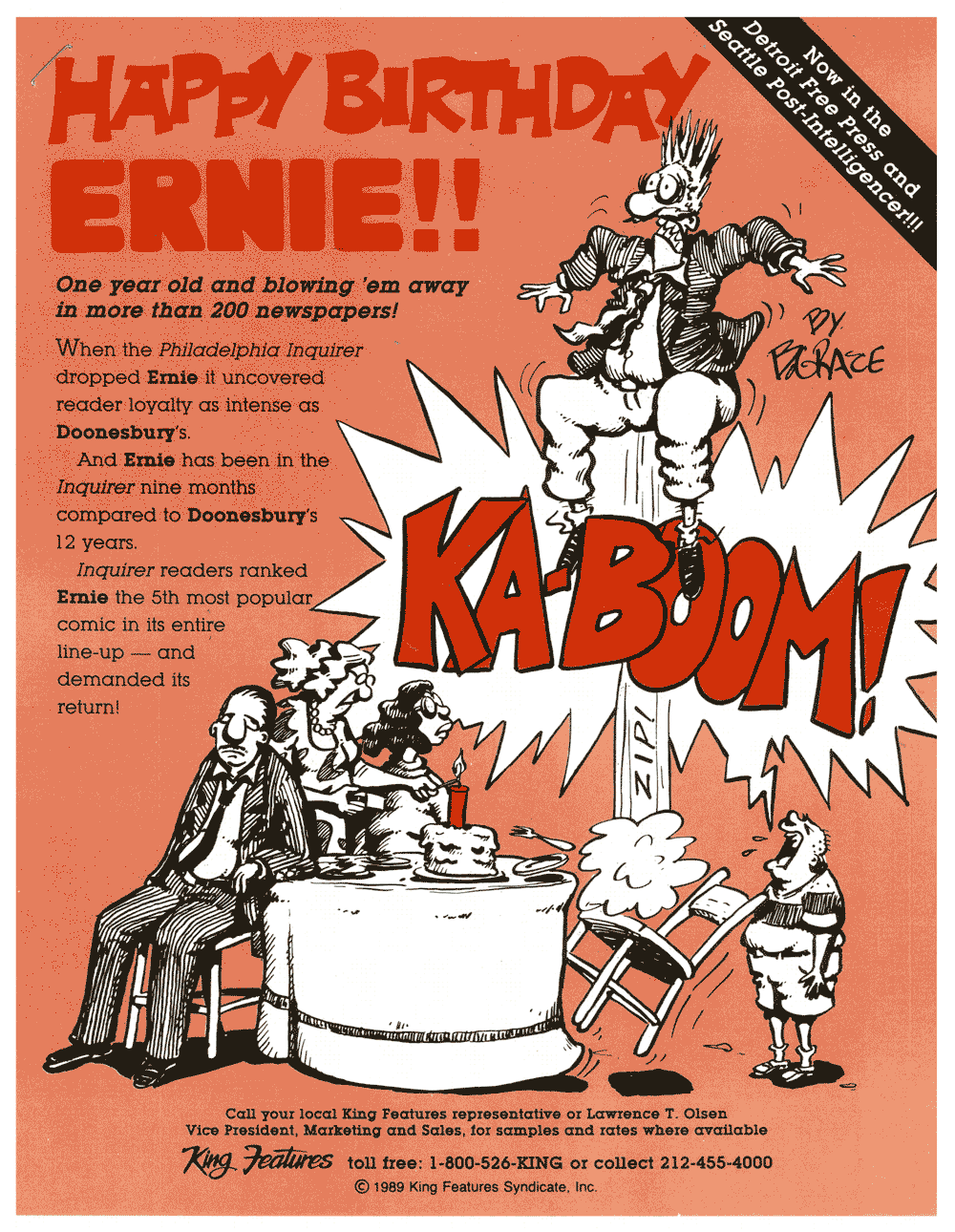 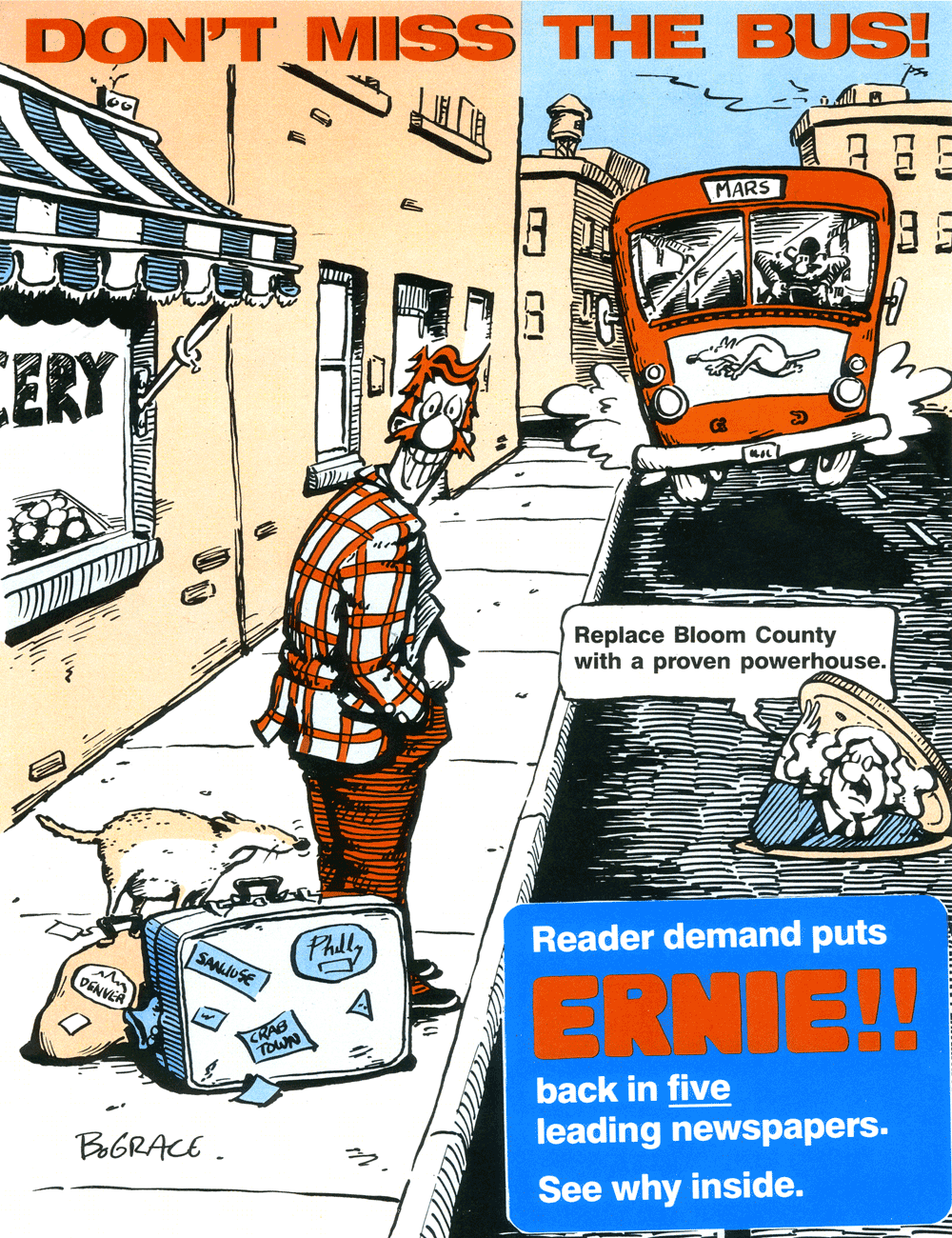 Eventually, one of Sid’s flim-flams paid off in the big time, in which he actually wrested the title away from his own creator…for the good of the club, of course. 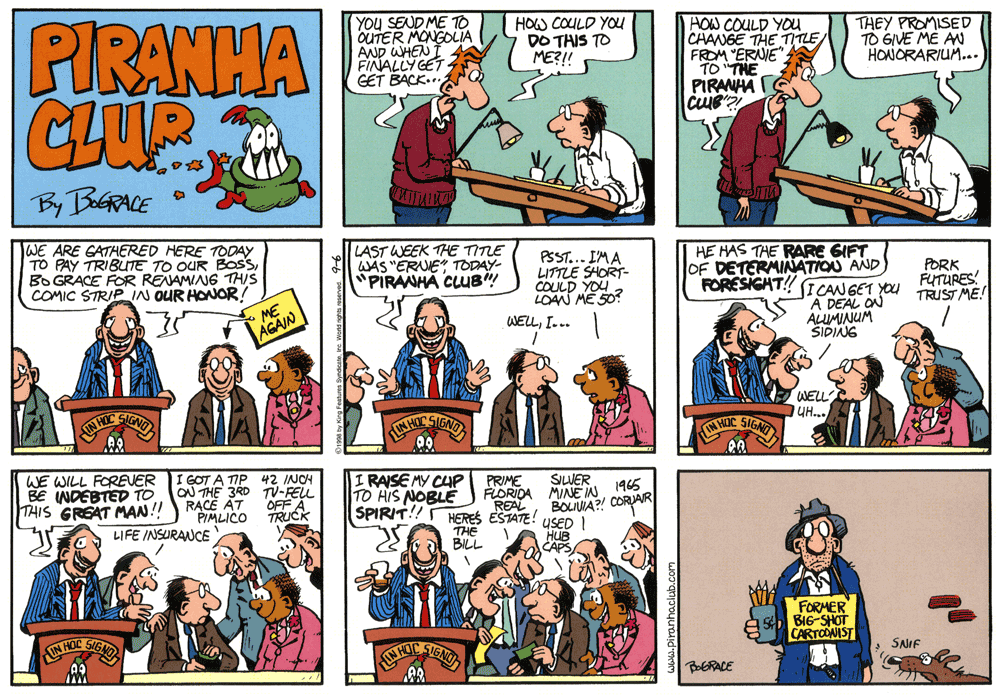 So you might say it is a double anniversary celebration—where comic strip readers get two strips for the price of one.