Does it get any better than this? 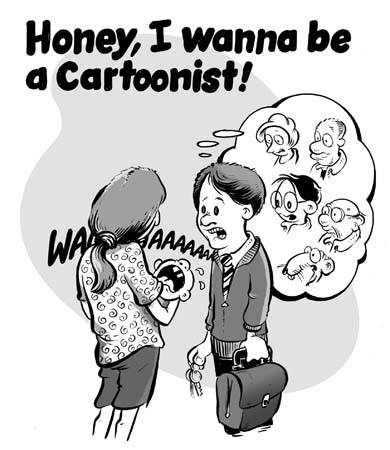 As I was sitting in my studio this morning staring out the window at the beautiful snow coming down, a question popped into my head. I don’t know why, but it did (This may turn out to be a long post, so if you need to go get your coffee, or put the dog out, go ahead and do it now. I’ll wait).

Anyway, I found myself asking, “Does it get any better than this?” I have always made it a point to try and seize every opportunity that came along. If it meant moving to another city, then I’d move. A different job? No problem. A new career? Go for it, man. Despite this attitude, nothing could have prepared me for what I would ultimately become; a syndicated newspaper cartoonist. I didn’t see that one coming. Creating a daily comic strip for the past 6 years has been by far the hardest job I’ve ever had, and the most fun and rewarding. The Brilliant Mind of Edison Lee appears in newspapers all around the world, and I take great pride in that. It’s a huge part of me, and I plan to continue writing and drawing it for many more years, but eventually the day will come when that will no longer be the case. Then what?

The fact that I’m a cartoonist in the first place is all Anne’s fault! You see, I had a plan when we got married 27 years ago. We were going to move to Chicago and I was going to become a hot-shot art director working for a big agency. But early on in our marriage, she managed to gently steer me off course, and I wouldn’t discover what she had done until years later. The unofficial start of her diabolical plan actually started when we were first dating. Her father had a collection of the Charles Addams books, and she would show these books to prospective boyfriends. If they laughed at those twisted little comic panels, then she knew the guy was good enough to date. I loved them, and laughed, and so it began.

Anne was always a huge fan of newspaper comics. When we arrived in Chicago in 1986, we subscribed to the Sun Times because she said they had great comics (remember this, editors!!). I was never really into comics up to that point, but she slowly drew me in, and soon I was reading them all every morning, as well as those in the Tribune. 2 years into our marriage, and I was hooked. But somehow, reading comics was not enough. After a few more years I decided I needed to be someone who created them. In one insanely memorable moment as I was walking to the train from my office, I decided I wanted to be a cartoonist. I told Anne the minute I got home, and to this day, I don’t know if her first reaction to my shocking announcement was “Finally, my diabolical plan has paid off!” or “Are you completely off your rocker?” If she had any reservations at that moment, she did not share them with me.

Anne has always supported everything I do, and this time was no exception. We created our first comic strip together, and called it “Second Nature. ” The strip ran its course after a few years, but to this day, I consider some of those strips to be the best we’ve ever written.

Many years, and many submissions later, we found ourselves sitting in our mid-town New York hotel room after the official Edison Lee launch, contemplating this unexpected path we were about to take. Life is funny that way. One day you’re contently strolling down life’s path, and then, without warning, you suddenly find yourself veering off in some new, unexpected direction. This happened again a few years ago, only this time with Anne. Being a cartoonist and a member of the National Cartoonist Society puts us in contact with other cartoonists. We are fortunate enough to be friends with many of them. It is because of these friendships, and our love of the cartoon industry, that led Anne to found the Kenosha Festival of Cartooning. I often tell her that she is destined for great things in the field of cartooning, and that maybe my purpose in life was to become a cartoonist just so I could help her find the path to her ultimate destiny. Whether this is true or not is yet to be seen. I will forever be grateful to Anne for nudging me onto this path all those years ago. I owe my cartooning career to her.

Does it get any better than this?